Cuba in the Cross fire

During the reception ceremony, Cuba's Minister of Internal Trade, Betsy Diaz, thanked the Russian government for the gesture, on behalf of the people, the party and the authorities of the island. Cuba is going through complex moments in the face of Covid-19.

Also present was the ambassador of the Russian Federation in Cuba, Andrei Guskov, who stressed that this humanitarian aid comes at a time when the island faces the consequences of the economic, commercial and financial blockade of the United States and the Covid-19 pandemic.

Guskov announced that Russia is working in coordination with Cuba to meet the specific needs for medicines, one of the most lacking issues, and in the coming days will be received another aid load with medicines sent from Moscow.

Cuba makes it own vaccine so they have talent... Russia and Cuba should work together to produce new drugs and vaccines with a focus on cures instead of the western focus on treatments.

I think it is fantastic that a communist country like Cuba doesn't just sell arms to its neighbours but offers healthcare support as its primary income source... the west is so militarised they don't see the irony of them exporting and contributing to wars around the place and Cuba and Russia trying to export and contribute to peace.

Comment from a Vietnamese netizen: the Western imperialist media will never broadcast these news.

During the meeting with Cuban Ambassador, Orlando Nicolás Hernández Guillén, Vietnamese Prime Minsiter Phạm Minh Chính announced the donation of 10000 tonnes of rice to Cuba, to assist Cuba during the current challenging period of the Caribbean country.

Together with the 10000 tonnes donated by the Party and central government, the regional government and Party committee of Hanoi also donated a further 2000 tonnes of rice, make the total amount of donation up to 12000 tonnes.

Vietnam expressed her hope that the both countries will continue to strengthen cooperation to ensure the food security of Cuba. 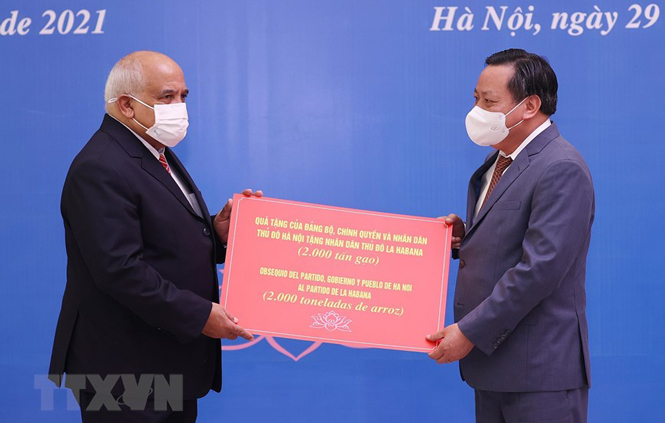 WASHINGTON (Sputnik) - The U.S. targets Cuba's National Revolutionary Police and force chief in their latest round of sanctions against the Island nation, the Treasury Department announced.

The U.S. is currently in talks with private sector companies to provide the Internet to the Cuban people and bypass censors, a senior government official told reporters.

"We are in talks with private-sector providers about the possibility of providing wireless communications LTE to the Cuban people, which we believe is a right to include all of the options, but also looking at other ways of ensuring that the Cuban people have a right to information, the right to communicate between itself and the international community can really see the abuses that are taking place," the official said.

He added that there will also be a dialogue on humanitarian support for the Cuban people.

The official also said the U.S. will explore all possible options to circumvent Havana's control over the flow of information to Cuba.

"We see censorship of information as a violation of human rights and that is why we are going to explore all possible options to guarantee access to that information," the official said during a press conference.

President Joe Biden said the U.S. will continue to impose sanctions on people in Cuba for alleged abuses.

"We will continue to add sanctions to people who commit the abuses of the regime," Biden said at the White House.

Hours earlier, the U.S. Treasury Department imposed sanctions on Cuba's National Revolutionary Police and force chief in its latest round of measures against the Island nation.

The president also ordered the State and Treasury departments to give him, within a month, recommendations on how to get remittances to the Cuban people without the government of the island.

"I have ordered the State Department and the Treasury Department to provide me, within a month, with recommendations on how to maximize the flow of remittances to the Cuban people without the Cuban military taking their share," Biden said.

Cuba's foreign Minister, Bruno Rodríguez Parrilla, condemned the sanctions imposed by the United States against the National Revolutionary Police and two of its leaders, and affirmed that these measures seek to justify the economic blockade that Washington applies against the island.

"I strongly reject the inclusion of the National Revolutionary Police and its two main leaders on spurious U.S. lists. These arbitrary measures add to the misinformation and aggression to justify inhuman blockade against Cuba, " the Cuban Foreign minister wrote on Twitter.

The Cuban presidency also criticized the US measures.

"Will the U.S. government know that it is including the Cuban people on its sick lists? Do you know that in Cuba the people have the power and defend the conquests of the Revolution? It is obviously consciously damaging the whole people, " the account of the Cuban presidency wrote on Twitter.

Cuban Boxer Shouted a Loud & Clear Commitment to the Revolution

During one of the 81 kg quarterfinal bouts at the Tokyo Olympics, Cuban boxer Julio Cesar La Cruz shouted "Homeland or Death! We´ll win" after finishing the fight against Emmanuel Reyes, an athlete of Cuban origin who competed for Spain.

"Homeland or Death" La Cruz stressed, after rejecting the slogan promoted by the U.S.-based conservative groups.

The Sirius Report
@thesiriusreport
·
11h
Cuba has signed an energy cooperation agreement with China, to upgrade Cuba’s energy infrastructure. The deranged, paranoid and naked emperor will be having an aneurysm as it imagines this is a cover for missile defence systems.

In short Cuban tourism is recovering after the Covid restrictions were relaxed thanks to Cuba's success in controlling the pandemic.

New infections have dropped off sharply across the country in recent weeks, according to official statistics.

The article is taken from Reuters with its typical Western rhetorics but we do not need to pay attention to that. We just need to know the undeniable fact that Cuba manages to overcome the pandemic.