Russia carries out another successful test launch of Bulava missile

The missile was fired from underwater from the Dmitry Donskoy nuclear-powered submarine in the White Sea at 5:10 Moscow time (1:10 GMT).

That video was reporting the launch, but it was not footage of it. It was Sineva. You can tell because it was liquid fuel.
coolieno99

Reuter's version of the launch


MOSCOW, Oct 29 (Reuters) - Russia successfully carried out a new test of an intercontinental missile on Friday that Moscow hopes to make the cornerstone of its nuclear missile programme.
The military said the 12-metre long Bulava, or Mace, fired from a submarine near Russia's border with Finland, successfully hit its target some 6,000 km (3,370 miles) away in the peninsula of Kamchatka in Russia's far east.
"Today at 5:10 a.m. (the missile) was launched from the submarine Dmitry Donskoi," said Igor Konoshenkov, press officer of the Defence Ministry.
"The launch, from an underwater location, was carried out normally and everything was up to standard," he told Reuters by telephone.
Military analysts saw Friday's test of the Bulava, which had failed seven of 13 previous trials, as a crucial hurdle in proving the reliability of the missile as a mainstay of the Russian army.
Further failures of the missile were expected to prompt fundamental changes to the costly project.
The Bulava missiles, which weigh 36.8 tonnes and can travel a distance of 8,000 km, are designed to be fitted on the Russian Borei class of submarines.
One missile can hold 6-10 nuclear warheads, which would deliver a impact of up to 100 times the atomic blast that devastated Hiroshima in 1945.
Deputy Prime Minister Sergei Ivanov told RIA news agency six more successful tests of the rocket were needed before it would be ready for use in the navy. .....

Ivanov has mentioned that it needs 6 sucessful launches for it to be accepted by Navy , so one for launch probably from YD by end of this year and 3 launches planned for until middle of next year.

I can bet the first 3 launches will test the reliability of Bulava design and will put the missile through different trajectories each launch more complicated then the previous one.

I still feel these missile are carefully built and does not really solve the production issue that it will face once it enters serial production , hope they put in lot of money to solve it and audits all the 620 suppliers of Bulava
Admin

I believe the problem is solved. Two successful launches by only watching the manufacturing process indicates it was indeed poor quality control. This missile is based on Topol so it should have worked period.
Viktor

Besides it was the only two lounches from submerged position.
Austin

Vladimir79 wrote:I believe the problem is solved. Two successful launches by only watching the manufacturing process indicates it was indeed poor quality control. This missile is based on Topol so it should have worked period.

Quite likely that is the case but its not over the bridge yet.

Bulava is made by the same design bureau MITT that made Topol-M , but its not based on Topol its a new missile with new design and characteristics
Admin

It is a navalised version of Topol-M.

The Bulava (SS-NX-30) is the submarine-launched version of Russia’s most advanced missile, the Topol-M (SS-27) solid fuel ICBM. The SS-NX-30 is a derivative of the SS-27, except for a slight decrease in range due to conversion of the design for submarine launch. The SS-27 is 21.9 meters long, far too large to fit in a typical submarine.

Vladimir79 wrote:It is a navalised version of Topol-M.

The Bulava (SS-NX-30) is the submarine-launched version of Russia’s most advanced missile, the Topol-M (SS-27) solid fuel ICBM. The SS-NX-30 is a derivative of the SS-27, except for a slight decrease in range due to conversion of the design for submarine launch. The SS-27 is 21.9 meters long, far too large to fit in a typical submarine.

No its a myth that has been carried too long , Topol-M and Bulava has nothing to do with each other except for the fact that it has been designed by same design bureau.

Bulava has been designed from scratch and its a new SLBM using new technologies ( all carbon composites ) and it achieves a very lighter weight , has the same throw up weight as Topol-M/RS-24 and has the same range as Sineva.

The only thing it would perhaps share with MIRV'd Topol-M i.e. RS-24 is the manouverable warhead , as they both have almost identical throw up weight.
Austin


Russia’s new Bulava submarine-launched ballistic missile conducted another, 14th, successful trial on October 29, reported the Russian Defense Ministry. Similar to the previous successful trial on October 7, this time the missile was again fired from a submersed position by the Typhoon class Dmitry Donskoy submarine in the White Sea to the test range Kura on the Kamchatka peninsula.

Now Bulava has seven successful launches of a total 14 trials. This year the Russian military plans to have one more launch from the new Borei class Yuri Dolgoruky sub that is designed to be the in-service carrier of these missiles. The Defense Ministry earlier explained that three launches in a row with the missiles assembled at one time are needed to eliminate the manufacturing defects which caused the previous test failures.

According to the first deputy defense minister Vladimir Popovkin, the missile will be tested until the reliability ratio of 0.98-0.99 is reached. The Russian first vice premier Sergey Ivanov was cited by RIA Novosti, saying that apart from the remaining launch in 2010, five more test firings are planned for the next year. “It’s evident that there is no engineering mistake”, he hurried to say, adding that the reason for previous failures was manufacturing defects.

Great news for Bulava fans(count me as one also)
Can anybody tell me what BULAVA actually means??
Admin

You mean a chemical MACE??
IronsightSniper


The Russian Defense Ministry said on Friday it has scheduled a new round of test launches of its troubled Bulava missile for mid-June.

Despite several previous failures, officially blamed on manufacturing defects, the Russian military has insisted that there is no alternative to the Bulava and pledged to continue testing the missile until it is ready for service with the Navy.

"The launch will take place between June 15 and 17 from the Dmitry Donskoy nuclear submarine [in the White Sea,]" the source said.

Russia is planning to conduct at least four Bulava test launches this year and deploy the missile on its new Borey class strategic submarines.

The Bulava (SS-NX-30) submarine-launched ballistic missile carries up to 10 MIRV warheads and has a range of over 8,000 kilometers (5,000 miles).

The Russian military expects the Bulava, along with Topol-M land-based ballistic missiles, to become the core of Russia's nuclear triad. 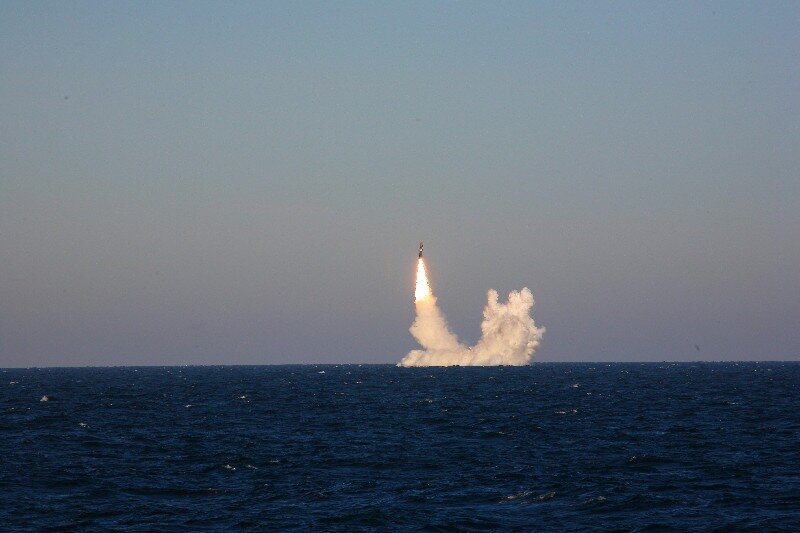 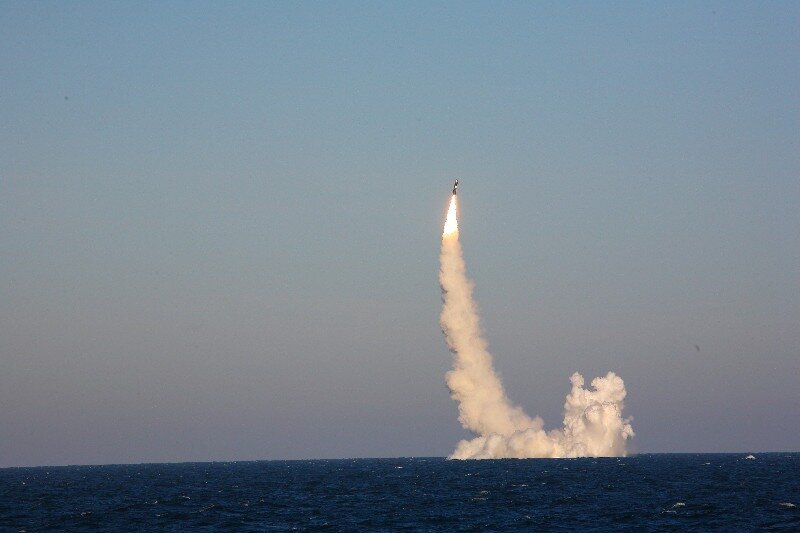 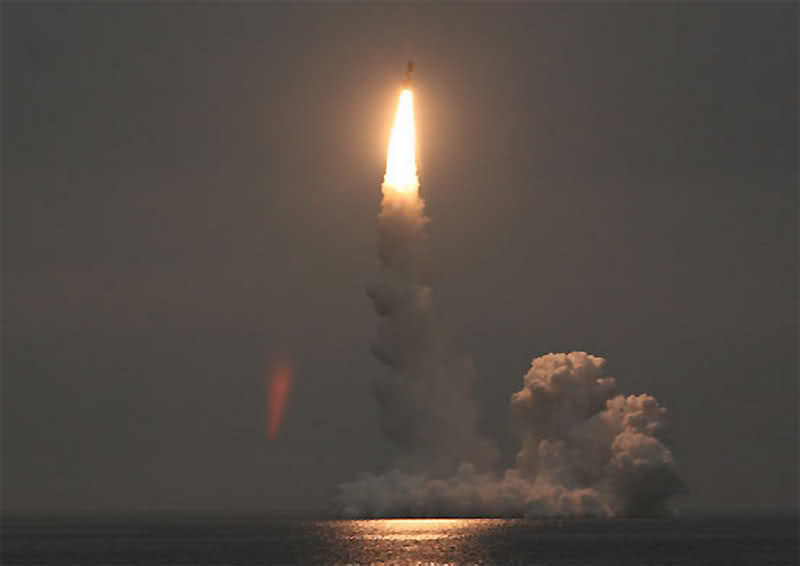 On June 28, 2011 the Yuri Dolgorukiy submarine of the Northern Fleet conducted a test launch of the Bulava sea-launched ballistic missile. The ministry of defense reported that the launch was successful. The missile was launched at 15:55 MSK (11:55 UTC) from a submerged submarine deployed in the White Sea. The warheads were reported to have successfully reached their targets at the test site in Kamchatka.

This was the 15th in the series of Bulava tests and the first launch of the missile from a submarine of the Project 955 class; in all previous tests the missiles were launched from the Dmitry Donskoy Project 941 submarine. The Russian Navy believes that the Yuri Dolgorukiy submarine could begin service in 2011. However, the 2011 test program has not been completed yet - it wasexpected that it would include four to five launches. Normally, an SLBM test program includes a number of salvo launches (see the history of R-39 tests), so we could probably expect salvo launches of Bulava ass well.
Admin

MOSCOW - Russia's test launch of its new Bulava intercontinental missile was delayed due to a malfunction on the nuclear submarine supposed to fire it, an official said Aug. 21.

"The launch from [nuclear submarine] Yury Dolgoruky was set for Saturday [Aug. 20] but it did not take place due to a malfunction in the submarine energy systems," the official from the Sevmash navy base in Severodvinsk told Interfax.

The submarine was in the arctic White Sea at the time of the incident and was forced to return to base without completing the mission, the official said.

A total of 15 Bulava missile tests have been carried out since 2005, but only seven of them have been considered a success.

The missile's incorporation into the armed forces is part of a wide-ranging military reform aimed at updating the military's Soviet-era structures and equipment to bring them in line with the demands of modern warfare.

"The regular launch of the missile was conducted at 7:20 a.m. Moscow time from a submerged position from the regular carrier in line with the state flight development tests at a maximum flight range of the missile," the spokesman said.

He added that the missile had successfully reached its target in the Pacific Ocean in accordance with all the necessary shipping security measures.

This is the 16th launch of the Bulava missile. Only eight of the previous 15 test launches were successful.

The first test launch of the Bulava from the Yuri Dolgoruky was conducted on June 28, 2011. Before that the missiles were fired from the Typhoon class Dmitry Donskoy submarine.

The Bulava (SS-NX-30) submarine-launched ballistic missile carries up to 10 MIRV warheads and has a range of over 8,000 kilometers (5,000 miles). The three-stage missile is specifically designed for deployment on Borey class nuclear submarines.
Cyberspec

Interestingly, the target area was near Hawaii and was closed for shipping for a 3-4 days.

Photo of Bulava launch at 45 degree (from horizontal) for maximum range trajectory.

Of course as long as it goes more than 8,000km it means they can hit any target on CONUS without leaving the pier... so any extra range is gravy.
Sponsored content