I personally dont see the need of pr.22460 except for filling the pockets of those behind this project. Russian MoD should instead be adding more of pr.22160 ships.

w.r.t to pr.21300 Igor Belousov, is there any plans to replace the non-Russian stuff with Russian ones?

And, does anyone have any info or details regarding the large refueller/replenishment ship that Russia submitted for Indian Navy's tanker tender. The contract was eventually won (& also delivered) by the Italians by using lower grade steel and lower pricing, not to mention the Italian connection which could also have played in that deal.
George1 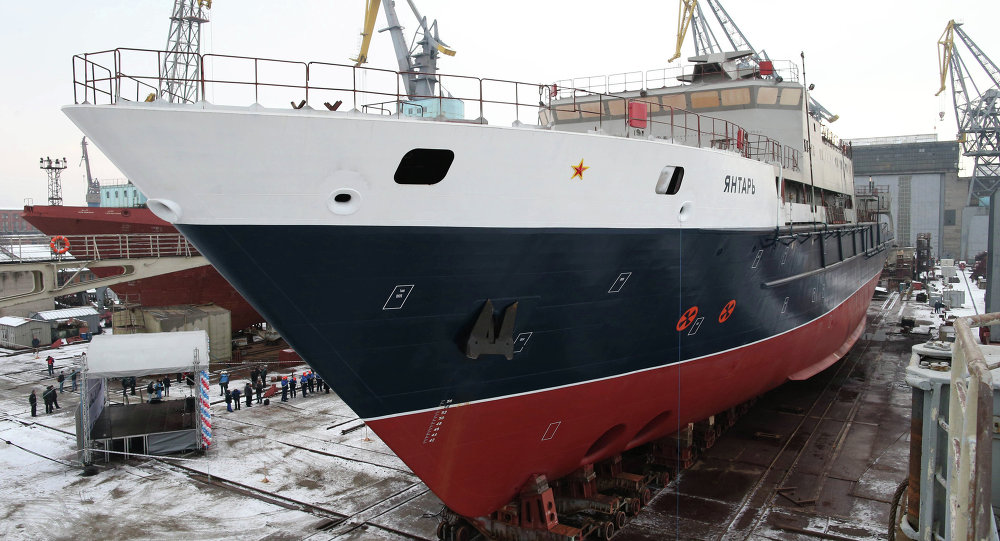 The Russian Navy has received a brand new oceanographic research vessel, the Yantar, which is equipped with two self-propelled deep submergence vehicles; the ship was built at the Russian Baltic shipyard of the same name, Yantar, and is slated to be used for deep-sea research and rescue operations.

The Russian Navy on Saturday took delivery of a new oceanographic research vessel.

The ship has been christened the Yantar, the Russian word for amber. It was named after Russia’s Baltic shipyard in Kaliningrad it was built at, which bears the same name, Yantar; the Russian exclave is known for its amber.

The vessel, also known as Project 22010, is designed for deepwater research. The 108.1m-long vessel, with a beam of 17.2m, was developed by the Almaz Central Marine Design Bureau in St. Petersburg.

The propulsion system includes two fixed pitch propellers and two bow thrusters. The ship carries the latest, most innovative equipment for acoustic, biological, physical, and geophysical surveys. It has a displacement of 5,200 tons, a maximum speed of 15 knots, a range of 8,000nm, and can accommodate a crew of 60 members.

The vessel's equipment includes at least two deepwater, autonomous underwater vehicles (AUVs) Rus and Konsul, which can be used for rescue operations.

Konsul and Rus – a new class of Russian military deepwater submerge vehicles. They are somewhat smaller than the well-known Mirs, accommodating a crew of two instead of three, but are purely domestically produced vessels and have a higher maximum depth due to their titanium pressure hulls: during the tests the original Konsul dove to the 6,270 m.

“The Yantar is equipped with a unique on-board scientific research complex which enables it to collect data on the ocean environment, both in motion and on hold. There are no similar complexes anywhere,” said the head of the deepwater research department at the Russian Defense Ministry, Alexei Burilichev. 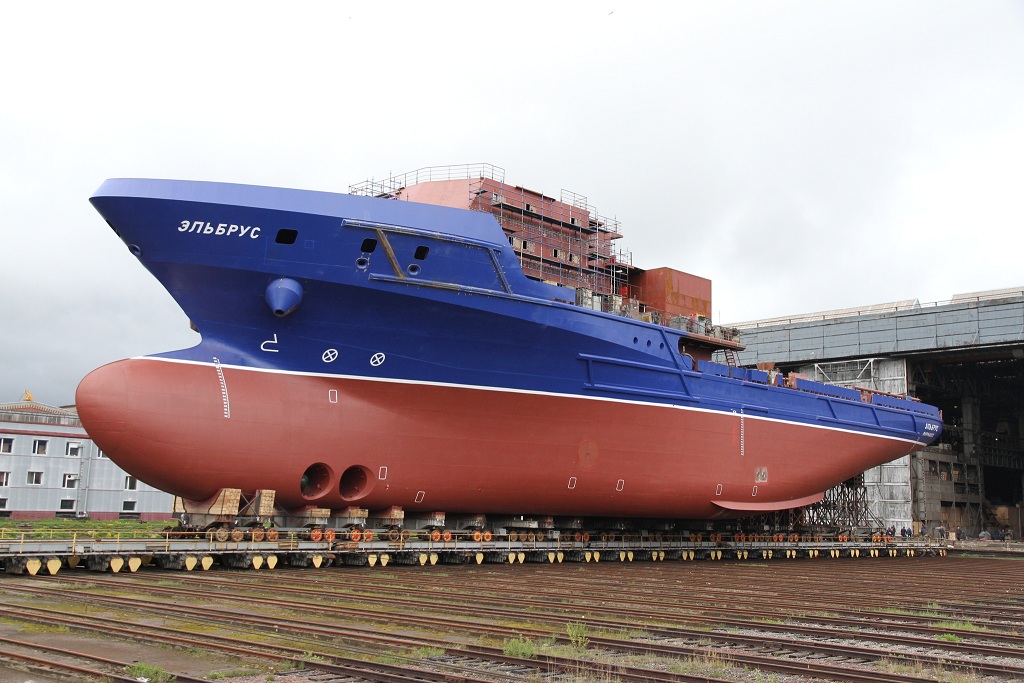 The support fleet is being replenished at a steady pace...the other 2 ships of this class should be handed over in the next 2-3 years 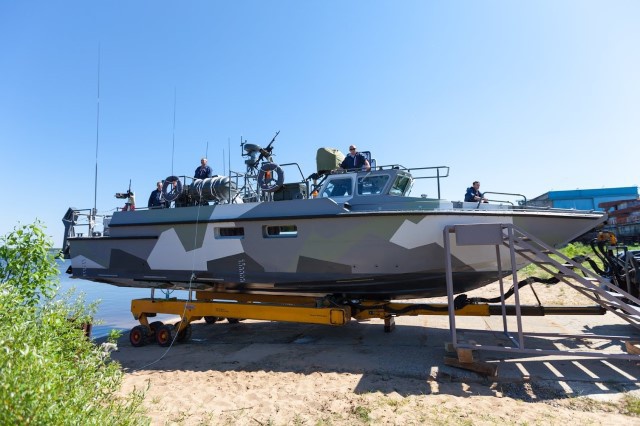 Special version of the "Raptor" boat being tested on the Moskva River...assumed to be a VIP version for the Min of Defence 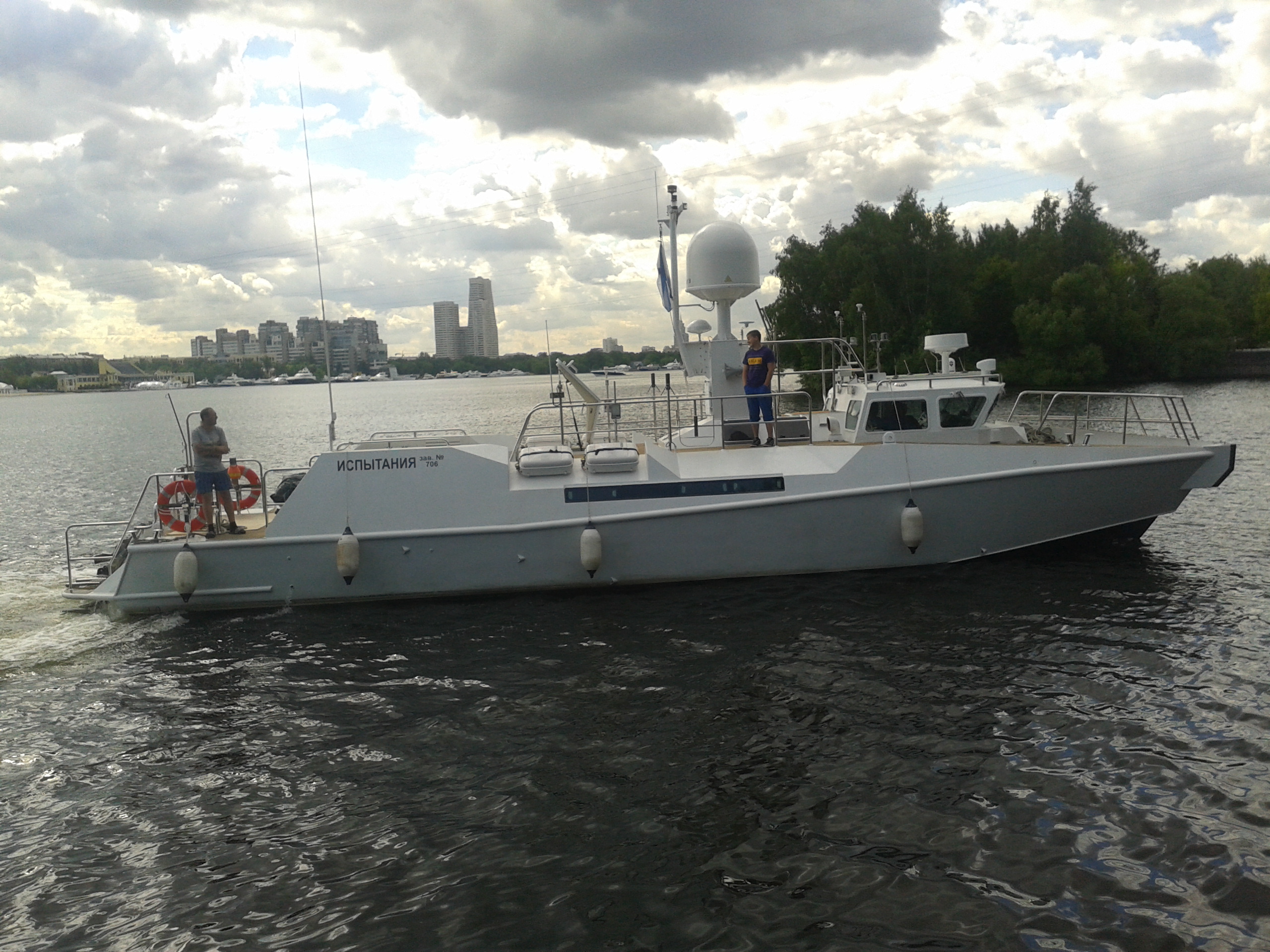 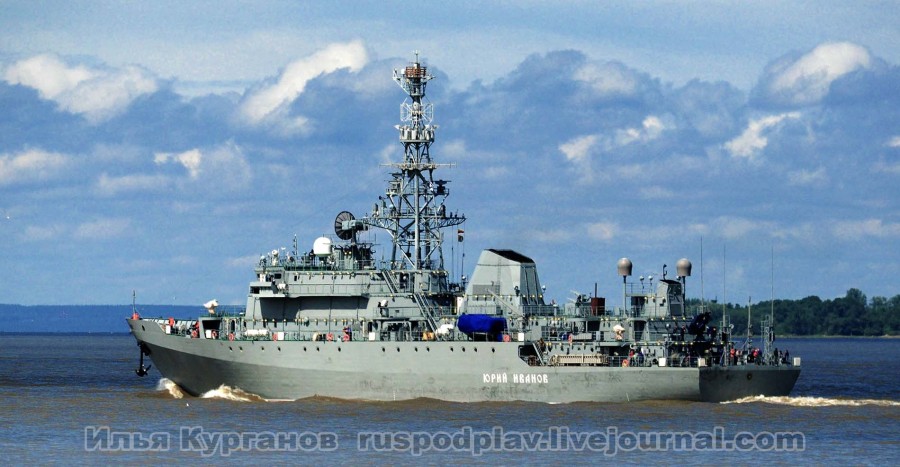 Commissioning of the project 21820 landing craft 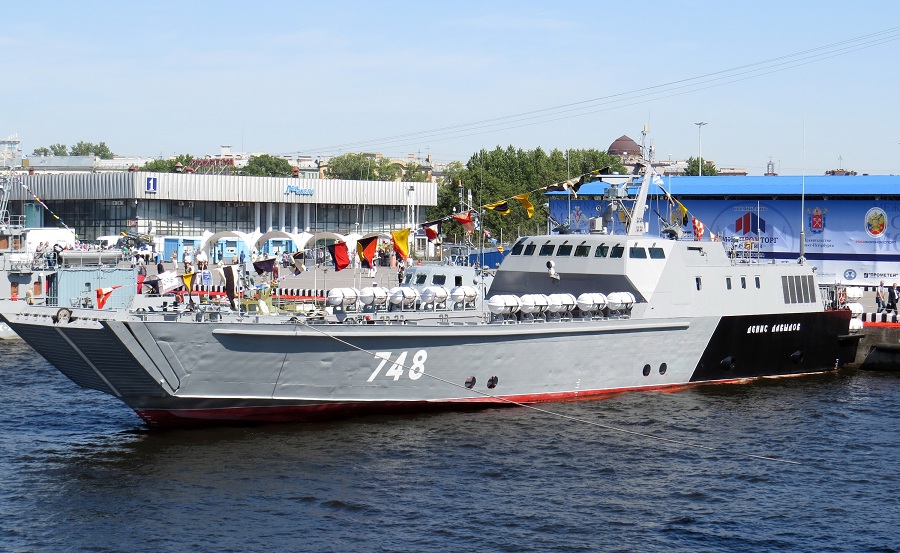 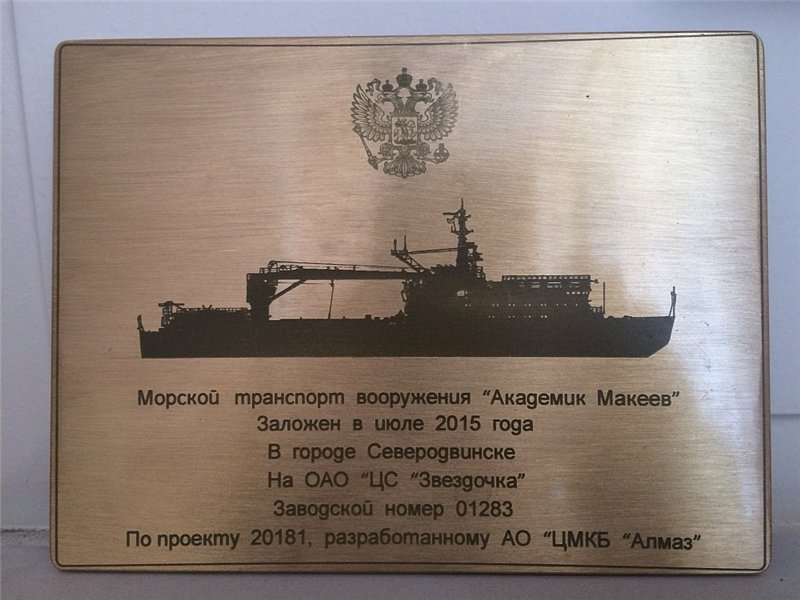 The ice-reinforced vessel was designed for loading, unloading and transporting weapons

"The Academician Kovalyov is expected to take to the sea for the first time approximately in the third ten-day period of September for sea trials", the spokesperson said.

As was reported earlier by the shipyard, the ship is to be delivered to the Russian Navy before the year-end.

The Academician Kovalyov was launched in the summer of 2014 to be completed afloat. The ice-reinforced vessel was designed for loading, unloading and transporting weapons. It is 107.6 m long, with a beam of 17.8 m, a total displacement of 6,300 tons and a crew of 60. The Russian Defense Ministry awarded the contract for the ship's construction in September 2011.

The Project 20180TV ship was designed by the Almaz Central Marine Design Bureau. The Academician Kovalyov is a derivative of the Zvyozdochka seagoing rescue towboat built by the Severodvinsk shipyard and delivered to the Navy in 2010.

In July, the Severodvinsk shipyard laid down the armament support ship Academician Makeyev, the fourth special vessel in the project's series designated for the Russian Navy. The ship was named after Viktor Makeyev, a distinguished Russian scientist and engineer, a general designer of submarine-based ballistic missiles (1924-85).
George1

The Project 1914.1 Marshal Krylov measurement ship with a displacement of 23,700 tons was launched on July 24, 1987 and remains the only Russian ship in its class, outfitted for space communications

"We are working on modernization of the Project 1914.1 Marshal Krylov ship operated by the [Russian Navy] Pacific Fleet. Improvements in the ship’s measurement equipment will enable it to support rocket launches from the Vostochny cosmodrome that is being built now," he said.

According to the chief designer of Baltsudoproyekt that developed the Project 1914.1 ship, "the Marshal Krylov is under our continuous supervision because we are installing specialized equipment and extending its service life under the government-awarded contract."

Obukhov said that the Marshal Krylov had come to Vladivostok for the upgrade in October 2014. The upgrade is being performed by the Dalzavod shipyard.

The Project 1914.1 Marshal Krylov measurement ship with a displacement of 23,700 tons was launched on July 24, 1987 and remains the only Russian ship in its class, outfitted for space communications, and one of the largest and best-equipped Russian Navy ships. It operates in support of flight tests of advanced spacecraft, launch vehicles and cruise and ballistic missiles. Measuring 200-plus meters in length and having a crew of about 350, the Marshal Krylov has a speed of 22 knots and can carry two Kamov Ka-27 (NATO reporting name Helix) search and rescue helicopters.
Dima

Probably missed this news due to preoccupation with Russian campaign against international terrorists in Syria. As per this article, the hull is complete and it looks like Pr.23130 tanker will be launched in Nov 2015

Shipbuilders of "Nevsky shipbuilding-Shiprepair plant" has completed the formation of the hull under construction for the Russian Navy of the middle sea tanker "Academician Pashin". About the exhibition "Neva" to the correspondent have informed representatives of the company.

Earlier it became known that the boat in the water is scheduled for the end of November 2015.

The Navy of Russia considers the possibility of construction of a series of such vessels, however, the decision of laying of the next block can be made only after lifting of the flag at the head of the tanker. According to the commander of the Russian Navy Viktor Chirkov, which he pronounced on the tab "Academician Pashin", this event marked "an important milestone in the development of the auxiliary fleet of Russia, which had not been updated for 35 years."

Note that the construction in Shlisselburg (Leningrad region) tanker cost the Navy almost 3 billion roubles. The company explained the high cost of expensive ship propulsion system, a cargo transfer device, and use of foreign equipment, which is unique at the moment of laying the "Academician Pashin" in Russia was not made.

In addition to the transportation of fuel for the fighting ships, the tanker of project 23130 will be able to take on Board aviation fuel, food and spare parts. According to representatives of the plant, the tanker, the cruising range which is 9000 nautical miles, can perform tasks as part of a carrier battle group. Among other things it was planned that such tankers will be able to accompany the helicopter carrier type "Mistral".

LLC "Nevsky shipbuilding-Shiprepair plant" is located in 40 km from St. Petersburg in the city of Shlisselburg on the left Bank of the Neva river and is one of the oldest enterprises of water transport in North-West Russia. Is engaged in shipbuilding since 1952. Builds sea and river vessels of various types and purposes and all kinds of ship repair. Slipway for rising of vessels of Nevsky plant allows to launch and lift for repairs the vessels up to 140 meters and dock weight up to 3000 tons. In 2013, Nevsky shipyard has received a license of Rosoboronzakaz on the right to development, production, testing, installation, Assembly, maintenance, repair, utilization and realization of weapons and military equipment.


State contract for the construction of the Russian Defense Ministry maritime transport weapons project 20180TV (designer - JSC "CMDB" Almaz ") was signed on September 15, 2011. This vessel is ice-class is designed for loading, unloading and transportation of sea samples of weapons, and is a modification of the previously built at the same plant rescue tugboat "Star" project 20180 (serial number 01218), transmitted by the Russian Navy in July 2010. Maritime transport weapons project 20180TV will be used to ensure the deployment of new nuclear submarine strategic of Project 955 on the Kamchatka Peninsula in the Pacific Fleet.

July 23, 2015 was built for the Russian Navy the second maritime transport arms modified project 20180TV (20181) "Academic Makeev" (serial number 01283), which became the fourth unit of the series as the project 20180. It is expected that the ship will be commissioned in 2018 to the Northern Fleet.

The Ivan Khurs communications ship is planned to be launched in the second quarter of 2016, according to a spokesperson of Severnaya Verf shipyard.

The spokesperson added that the Ivan Khurs would significantly outmatch its predecessors.

On July 1, the head of the Russian United Shipbuilding Corporation order department, Anatoly Shlemov, told RIA Novosti that the Ivan Khurs will monitor US missile defense systems, among other tasks.

The Ivan Khurs communications ship is planned to be launched in the second quarter of 2016, according to a spokesperson of Severnaya Verf shipyard.
The Russian Navy will receive the Ivan Khurs reconnaissance ship, able to monitor US missile defense systems, in December 2016, a spokesperson of Severnaya Verf shipyard said Friday.

On July 1, the head of the Russian United Shipbuilding Corporation order department, Anatoly Shlemov, told RIA Novosti that the Ivan Khurs will monitor US missile defense systems, among other tasks.

"The armament support ship Academician Kovalev has left the shipyard and gone to sea today [on Thursday] for state trials that will last about a week. The acceptance report will be signed in December," she said. According to the spokeswoman, the shipyard has removed all the ship’s imperfections detected during the shipbuilders’ trials in October.

The Project 20180TV reinforced ice-class armament support ship Academician Kovalev was floated out in the summer of 2014 for its further construction afloat. The vessel is designed to load, unload and transport weapons. 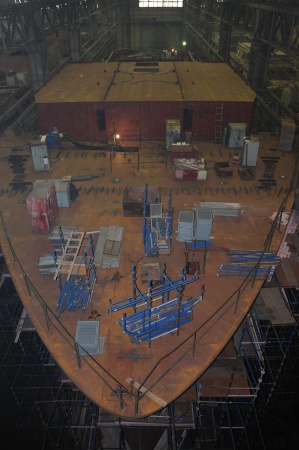 Built on "Severnaya Verf" head supply vessel project 23120, called "Elbrus", will travel to Murmansk until the end of February 2016. 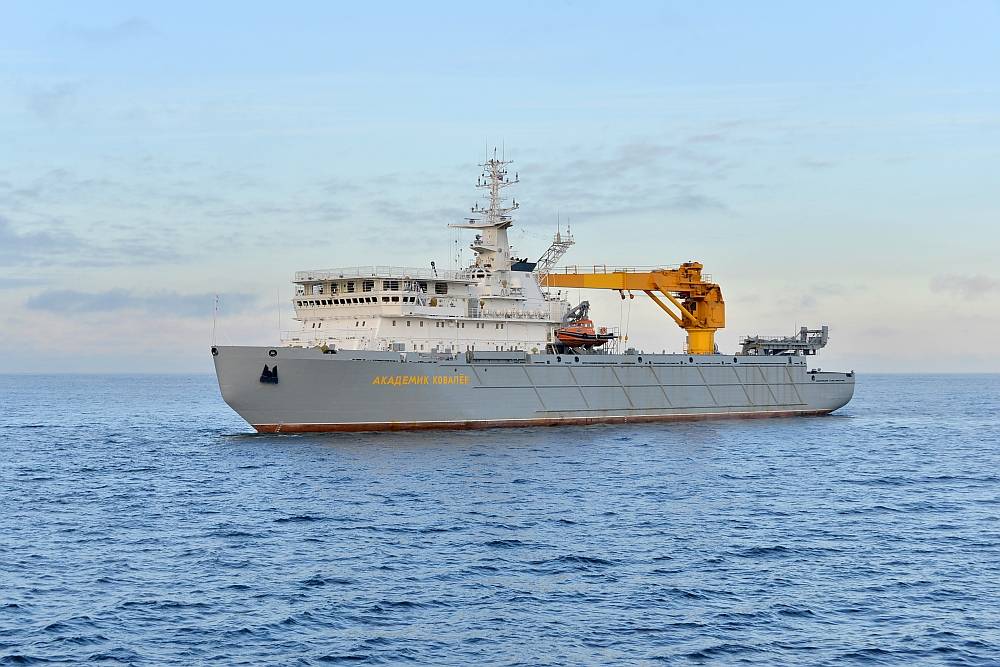 Can it load missiles on other combat ships ? what are russian ship that can suplly combat ship with weapons ?
Sponsored content