One of Libya's Governments Says to Step Down

Libya’s unrecognized Tripoli-based government, one of the two in the country, has announced it was stepping down.

MOSCOW (Sputnik) — Since 2014, there have been two governments in the country, a self-styled and more influential National Salvation Government in the capital city of Tripoli, and Council of Deputies in the eastern town of Tobruk that won a parliamentary majority at the June 2014 elections and has been recognized by the international community. In December, they agreed to create a Government of National Accord to end the political struggle.

"We inform you that we are stopping our work as an executive power, as the presidency, members of parliament and ministers of the government," the statement by the Tripoli-based government said, as quoted by the BBC on Tuesday.

The statement comes almost a week after several members of the Libyan UN-backed Presidential Council, which heads Libya's interim Government of National Accord, arrived in Tripoli.

Libya split following an Arab Spring protest that led to a civil war in 2011 and the overthrow of long-time leader Muammar Gaddafi.

The arrival of Libya's Presidency Council in Tripoli on Wednesday is a positive step in the Libyan peace process that promises to form a united government, Libyan journalist Hend Ali al-Honi told Sputnik.

The arrival of Libya's Presidency Council, the formation of which was brokered by the UN in Morocco in December, is a step towards reconciliation but after years of war and foreign interference Libyans are adopting a wait-and-see attitude to the new government, Libyan journalist Hend Ali al-Honi told Sputnik Arabic on Thursday.

"It is obvious that international pressure has produced the situation in Libya. The country has been suffering from this complicated conflict and war for years," al-Honi said.

"We are waiting until a clear image appears. We want to know what their interests are; will their interests serve Libya as one united government and maintain its territorial integrity?"

Al-Honi said that many Libyans aspire to the unification and reconciliation of Libya, and that the arrival of the Presidency Council is a step in this direction.

"It is possible that this authority will fail, but it is good for the country; we were afraid of the division of Libya. It is in the interests of Libya to be in harmony with each other and be united."

"The arrival of the members of the Libya Council won’t cause escalation of the political situation in Libya, because there are many who want conciliation."

"Many areas in Libya, not only Tripoli, aspire to conciliation and want the best for the country. Besides, many militant groups and militia declared their loyalty to the Libyan army, as happened in the eastern parts of Libya."

When it comes to Libya, Italy should carefully consider its military plans, as its intervention could make matters worse and turn the already volatile North African nation into complete chaos, Egyptian President Abdel Fattah el-Sisi told the Italian daily La Repubblica in an interview.

The agreement aims to put Libya back on the path of building a democratic State based on the principles of inclusion, human rights and the rule of law, after four years of factional fighting that has killed many Libyans and left nearly 2.4 million in desperate need of humanitarian aid.

Since Muammar Gaddafi was overthrown in 2011 two rival governments have formed in Tobruk and Tripoli, and many areas of the country are under the control of local administrations and militias who don't answer to any central administration. 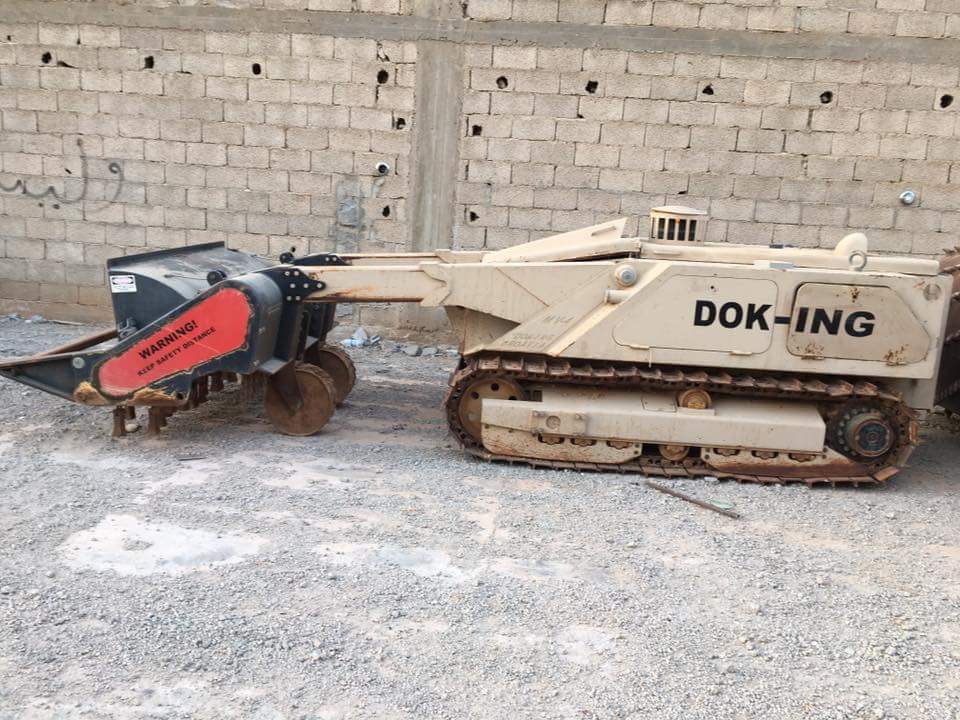 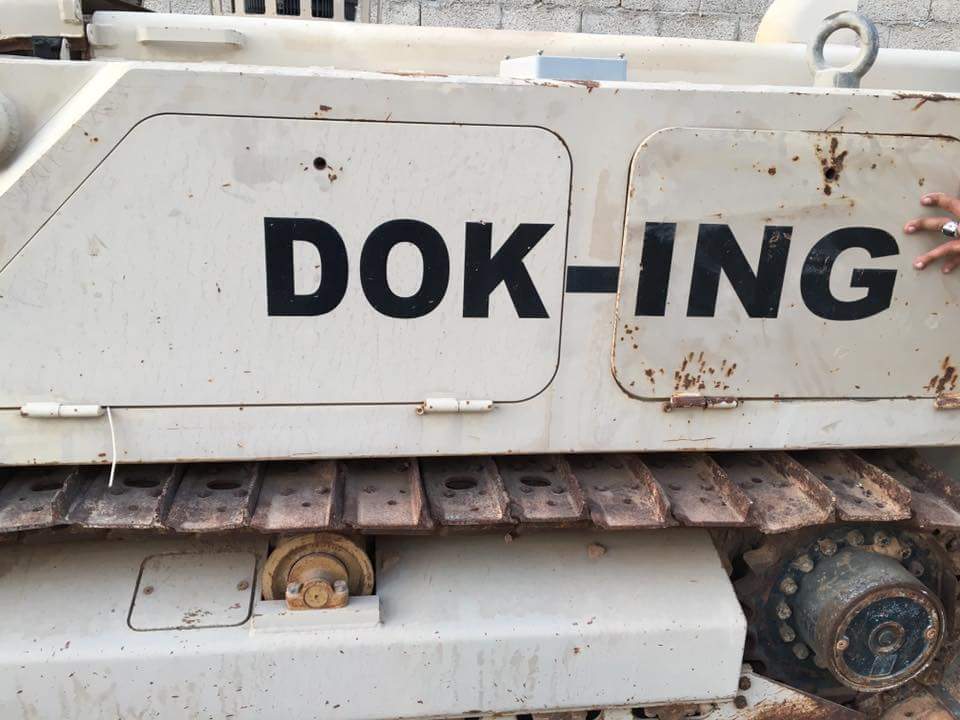 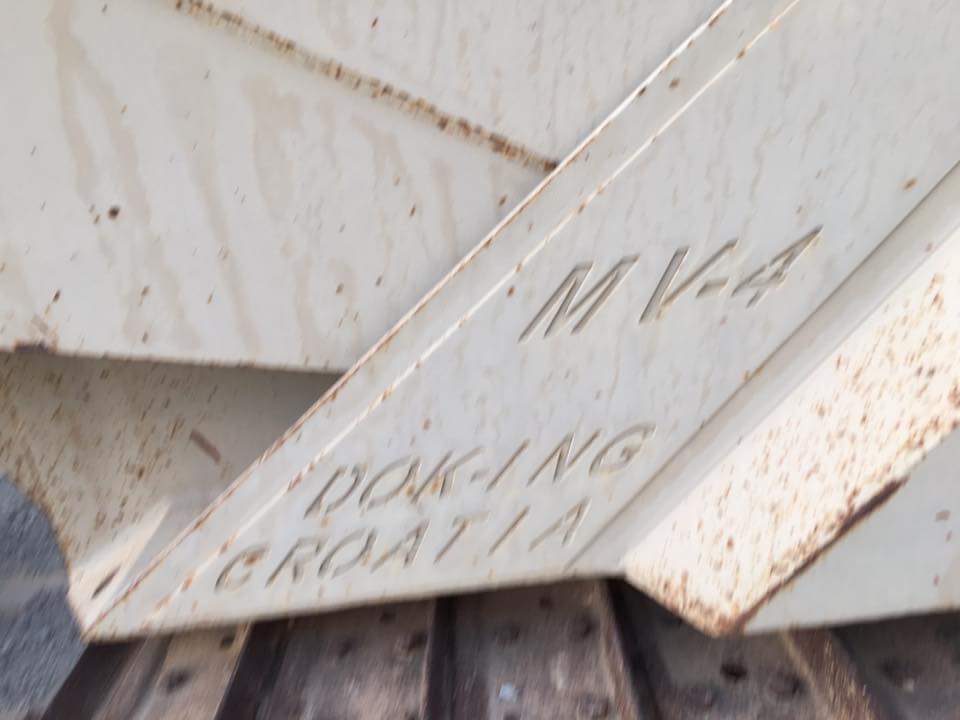 DOK-ING MV-4 Mine Clearance System captured from the Islamic State in Benghazi. Its produced by private Croatian company, was used as base for Uran vehicle series in Russia too.

UK special forces have recently carried out “black ops” attacks against Daesh stronghold of Sirte, on the Mediterranean coast, using Electronic Warfare to shut down ISIS communication network in Libya.

The “highly sophisticated” jamming strikes were led by a RAF RC-135W “Airseeker,” one of the three ex-USAF KC-135 tanker converted starting back in 2011 by L-3IS in Greenville, Texas, at a cost of around 650 million GBP (950M USD).

Indeed, the operators aboard the British Rivet Joint first tuned into the militants preferred frequencies and then used the high-powered transmitters to broadcast interference on the same wavelengths, drowning out the enemy’s conversations on the battlefield.

Whilst the RC-135 jammed the Daesh frequencies from off the Libyan coasts, aboard HMS Enterprise, a GCHQ (Government Communications Headquarters which is the centre for UK’s Signal Intelligence – SIGINT – activities) cyber-warfare team gauged the response to last week’s jamming strike by monitoring exchanges online between IS leaders – who are believed to be in command of up to 6,000 jihadists in Libya.

A defense source told the Daily Mail that the IS fighters “were very angry and couldn’t understand what had gone wrong. We jammed the frequencies for 40 minutes – long enough to prove the capability, but not so long that IS realized what was happening.”

The RC-135W is an intelligence gathering plane that usually monitors communications: the aircraft is equipped with all sorts of antennae and sensors, to eavesdrop enemy signals, transmissions, detect frequencies used by radio and radars and pinpoint sites of interest, mobile stations, SAM batteries, etc.

But, according to the source it also features active EW capabilities and the aircrews “occasionally use jamming strikes to spread confusion among their ranks at vital times.”

And what seems to be Schiebel Camcopter S-100
Guest

What are claimed to be Delta Force and SOCOM members in Misrata: 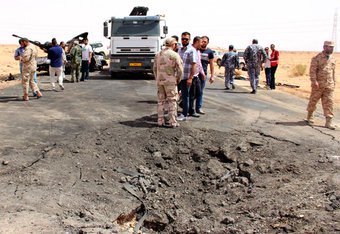 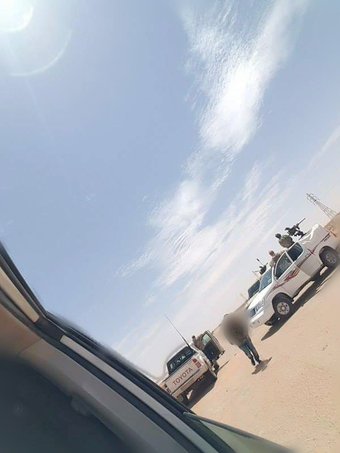 US and Greek authorities in a joint operation intercepted a container carrying 26 million prescription opioid painkillers that were destined to be supplied to the Daesh jihadists by sea, Greek media reported Friday.

MOSCOW (Sputnik) – According to the Ekathimerini newspaper, the container with Tramadol was discovered by officers of the Greek Financial Crimes Squad’s narcotics unit and agents of US Drug Enforcement Administration (DEA).

The container, which, according to the declaration carried towels and tablecloths, had reportedly arrived from India last month and was expected to be delivered to Libya.

Last February, another container with opioid painkillers ordered by the same Libyan company with alleged ties to Daesh was confiscated in Dubai by the local authorities.

The Daesh is an extremist group active in Syria, as well Iraq and other regional states, notorious for its human rights atrocities and a number of major terrorist attacks, such as the ones carried out in Paris and Brussels. The group is outlawed in Russia, the United States and many other countries.

it seems that the libyan forces have finally come round and attacked Daesh's sirte enclave before the beast could grow too much.

abu baker al baghdadi seems to be losing yet another of his "colonies" in a widespread implosion of the group.

Yet I think daesh will have a few surprises within the GCC nations and turkey in the near future.
max steel

Seven combat aircraft were transferred from the Czech Republic to the United Arab Emirates (UAE) in 2015, according to recently released information that Prague submitted to the UN Office of Disarmament Affairs (UNODA) on its major conventional arms exports for that year.

The Czech submission to the UNODA did not identify the aircraft and the UAE's military is not known to have taken into service any combat aircraft that were either used or made in the Czech Republic.

The Army of the Czech Republic's website noted that the size of its Mi-24/35 attack helicopter fleet dropped by seven helicopters from 2013-14, and the UAE is suspected of buying the same types and transferring them to its allies in Libya in violation of the UN arms embargo on the North African country.
max steel

The soldiers were killed while carrying out "dangerous intelligence operations", Mr Hollande said. Libya's UN-backed government responded by saying that their presence was a "violation" of the nation's sovereignty.

It said in a statement that it was "displeased with the French government's announcement".Earlier on Wednesday, French defence ministry spokesman Stephane Le Foll confirmed for the first time that its special forces were in Libya.

On Tuesday, Associated Press quoted Libyan officials as saying an Islamist militia shot down a French helicopter. The attack on Sunday happened near the city of Benghazi, and left no survivors, AP reported.

Libya has fragmented since the 2011 uprising when Col Muammar Gaddafi was ousted from office with the help of Nato air strikes.
It now has rival administrations, backed by various militias and brigades spawned by the revolution - and the chaos has allowed fighters from so-called Islamic State (IS) to gain a foothold.

Chopper was a lybian Mi-17.

However, the next day, FrAF went on an alleged retaliation strike ( https://www.washingtonpost.com/amphtml/world/middle_east/libya-unity-government-denounces-french-military-involvement/2016/07/21/80253bf6-4f3c-11e6-bf27-405106836f96_story.html)
starman

I hear Hifter has made some important gains in the east lately. Not sure what kind of government Libya would have if he were to win completely.
KoTeMoRe

Well it seems that the British finally decided to tell the truth, well as much as they can...

Please distribute as much as you can...we need ugly faces to get rad as hell.

At the end of this video, the spokesperson say "The recent talks with Libyan military leaders aboard the Admiral Kuznetsov suggest that Syria is not going to be the last battlefield for Russian PMCs".

Does this mean Russia is going to be involved in Libya, indirectly or directly.

par far wrote:At the end of this video, the spokesperson say "The recent talks with Libyan military leaders aboard the Admiral Kuznetsov suggest that Syria is not going to be the last battlefield for Russian PMCs".

Does this mean Russia is going to be involved in Libya, indirectly or directly.

the author of the article means Russian private military companies' members only. Saying Russia itself would be too far imho
calm

I wonder what will Russia do in Libya(we don't know for sure if they are in Egypt to fight in Libya, only Zionists are claiming this and we know not to trust the Zionists.)

If Russia is setting up a base in Egypt than it is a good sign because they can keep an eye out for what is happening in that area.

I don't think that Russia will commit any ground troops because of the obvious reasons and challenges, Russia might commit a small group of Special Forces to train a number of friendly forces in Libya.

It will be interesting to see what Russia does in Libya but I do not think they do anything major. 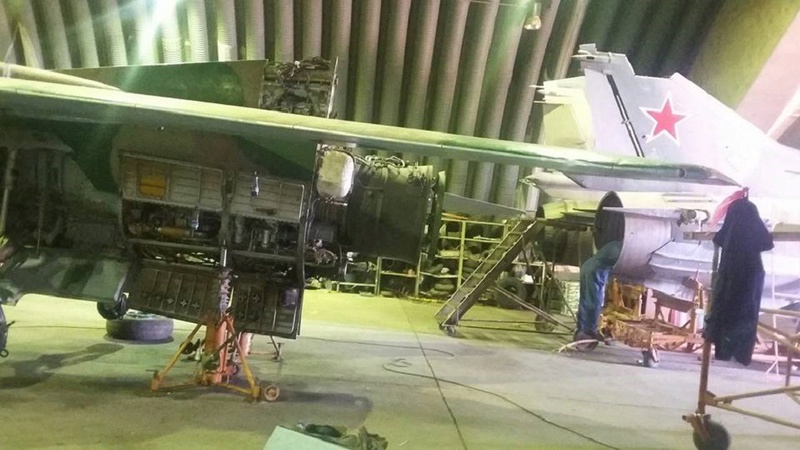 It looks like general Haftar got present from Russia after visit on Kuz carrier. The best option for Libyan army fighting terrorist would be MiG-27 upgraded with SVP-24 for precise attacks from high altitude. It is also compatible with using TV and laser guided bombs and missiles and Libya have enough MiG-23BN pilots to fly them.
medo 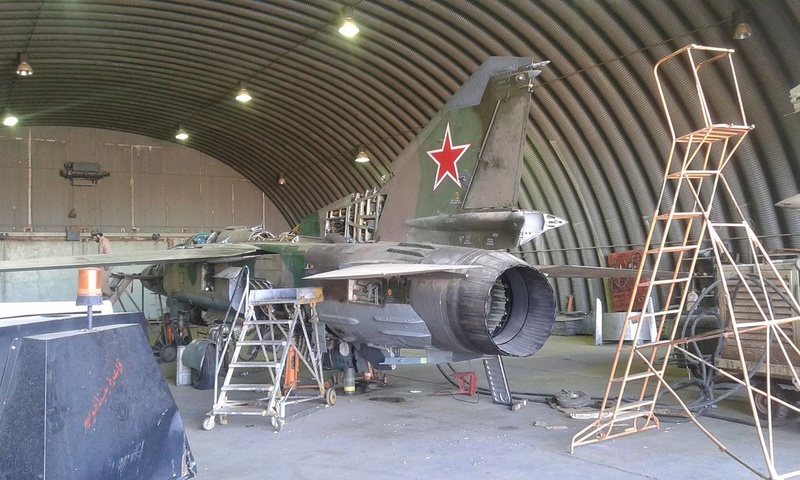 General Haftar receive another present from Russia. It looks like MiG-23UB.
miketheterrible

I am generally curious as to how many of the MiG-23's that are sitting in a field, wasting away, could technically be brought back into service through basic maintenance? I imagine that a lot of them could be gutted for working parts, used on a plane that has other working parts, and get one capable of working.
medo

Difficult to say, but we do not know, how many MiG-23/27 fighters are stored in many shelters, as those shelters are too small for bigger Flankers and MiG-31 jets, but big enough for Flogger family. I think RuAF still have them in reserve. As I know RCS MiG propose upgrade packages for Floggers and engines could be replaced by AL-31F engines, so I don't think they could have a problem to bring some of them in flying conditions, specially newer ones, which don't have many flying hours. Those delivered to Haftar have a quite good paint, so they didn't sit somewhere in the open to be canibalized.

Egyptian Rafale and F-16 strike attacks on Islamists in Libya