12:01 17/08/2009 MOSCOW, August 17 (RIA Novosti) - Russia and Libya have signed a contract to overhaul at least 145 T-72 Russian-made battle tanks in service with the Libyan Army, a senior government official said on Monday.

Moscow and Tripoli have been involved in talks on the modernization of the T-72 tanks since 2006 as part of renewed efforts to revive bilateral military-technical cooperation.

"Work has been conducted in the Libyan direction, and we have already made headway after signing a number of contracts with the country over the past year, including on the modernization of T-72 tanks," Konstantin Biryulin, deputy head of the Federal Service for Military-Technical Cooperation, said in an interview with RIA Novosti.

The official said talks on Russian arms deliveries to Libya are underway, but refused to disclose any details of the future contracts due to their confidential nature.

"I do not want to help our competitors in their work [on the Libyan arms market]," Biryulin said.

Russia has encountered tough competition with Western nations in arms sales to Tripoli since the UN lifted sanctions against Libya in 2003, when the Libyan president announced he would halt the country's nuclear weapons program and accepted responsibility for the 1998 terrorist bombing over Lockerbie in Scotland, agreeing to pay compensation to the victims' families.

Libya was one of the largest buyers of Russian-made armaments in the second half of the 20th century. Tripoli has acquired from the Soviet Union more than 2,000 tanks, 2,000 armored infantry fighting vehicles and armored personnel carriers, about 450 self-propelled artillery pieces, as well as a number of combat aircraft and large quantities of small arms since the beginning of the 1970s.

Konstantin Makiyenko, deputy director of the Russian Center for Strategic and Technological Analysis, said last year that future Russian arms contracts with Libya could be worth up to $4 billion, and include the total overhaul of Libya's obsolete arsenal of tanks.

"In particular, over 100 T-72s require an urgent overhaul, and the same refers to the T-62, T-55 and T-54 tanks, which constitute the backbone of the Libyan Army," the analyst said.

Libya in Talks with Russia Over Billion-Dollar Arms Deal

Libya plans to purchase over 20 warplanes from Russia. Moscow and Tripoli are currently in talks about the package of contracts, Interfax reports.

“Technically, many contracts have been elaborated well, and are ready to be signed. We only need to regulate financial issues,” the source said.

Russia’s defense export giant, Rosoboronexport, participated in the Arab-African Lavex-2009 air show, which took place in Libya in the beginning of October. Official spokespeople for the company said that potential customers were showing interest in the Su-35 multipurpose fighter jet, which was created with the use of fifth-generation technologies. Foreign specialists also paid attention to the Yak-130 training aircraft, as well as state-of-the-art MiG-35 jets and Ka-52A Alligator combat helicopters.

Russia and Libya have already signed five agreements in the field of defense cooperation. The contracts particularly touch upon the military hardware for land troops and navy.

Two year ago, Libya was in talks with France about a 6-billion-dollar arms deal to purchase Rafale fighter jets, as well as combat and cargo helicopters.

Su-35BM will sell like hell. Its without competitors best buy.
Viktor

Chemezov said a Libyan representative he did not name approached him personally during the opening ceremony of a Russian grenade-launcher assembly facility in Jordan earlier that day.

He said the Libyan representative had asked him “to hand a letter to our president, that they would like to buy something and will apparently send a delegation to discuss their request.”

That was not the first time the Libyans have made such a request, Chemezov said.
“They have already asked us, as far as possible, to revive contracts that were suspended,” Chemezov said, adding that negotiations had not begun.

Rosoboronexport head Anatoly Isaikin said in 2011 that the Russian state-run arms exporter had lost a total of $4 billion over the cancellation of contracts with Libya, adding that the figure included losses of opportunity and foregone profits.

Russia has joined arms sanctions against Libya, suspending supplies of military hardware to the country. Thousands of people have been killed since the uprising against Libyan leader Muammar Gaddafi's rule began in February 2011.

Gaddafi’s regime was overthrown in October 2011 by opposition forces with NATO’s assistance after a seven-month civil war. Gaddafi, who had ruled the country for almost 42 years, was captured and killed by rebels near his hometown of Sirte on October 20.

Kind of a weird way to hand over a request, isn't it?

Libya already contacted Russia with help in maintaining the legacy vehicles and aircraft they operate, but put off the new deals due to obvious priority in rebuilding the country.
Curious what has changed. Surely they won't be buying Su-35s anytime soon.

I suspect it is more "patching up" of the remainder of the previous Regime's military.
Viktor

. I to think that delivery of 4 Favorit batteries and Pancir-S1 and Su-35BM might be

than western one. On the other hand it would be interesting if they really insist on those old deals

Besides Libya is a country that could face disintegration and tanks, APC, IFV in massive numbers will be required almost certainly.
Viktor

Well, since we sold out the old Libyan government for chump change
We might as well follow through and try to make some money from the new government there
TR1

Sold out implies Russia owed anything to the dictator.

I have no problem with not supporting pieces of shit like him.
GarryB

Libya was another country turning west and it bit them in the a$$.

Russia was selling them military equipment, but they were hardly close buddies.
Hachimoto

This is why I've said Russian should have stronger Navy the URSS figure it too late the Chinese now are going crazy to build a big navy. you can't do business nowadays without a huge navy in your back.
collegeboy16

Hachimoto wrote:This is why I've said Russian should have stronger Navy the URSS figure it too late the Chinese now are going crazy to build a big navy. you can't do business nowadays without a huge navy in your back.

TR1 wrote:Sold out implies Russia owed anything to the dictator.

I have no problem with not supporting pieces of shit like him.

I have no problem with leaving them to their fate; Gaddaffi was overthrown very quickly and that I judge as simply his people expressing what they thought about him.

I do have a problem with enabling Western aggression though; it's the greater evil here IMO.

I'm amazed at the cynisism in today's politics.

'Westernizing' is quite literally just about doing what the West tells you to do.
If you do what you're told, you're praised as a 'democrat', 'reformer', 'liberal', 'friend of the US and EU', etc...
If you don't than you are demonised like Putin is.

Medvedev was praised and considered a 'Westerniser' when he abstained in the UN from supporting the aggression against Libya; rather than opposing it.
And Yeltsin was of course many times hailed and lauded in the West for his part in the self-detonation of Russia and for doing what Western advisors and policymakers told him to do.

It's all so cynical it's unbelievable.

And unbelievable it should be - because in fact it's all an illusion. Words mean little in this case.
Medvedev got no reward from the West for abstaining from a Veto at the UN; Russia in fact is now being rewarded with another attempted intervention in Syria.
Yeltsin got no reward or assistance from any of his alledged friends. All the Western neo-liberal financial advice only served to make the situation in 90s Russia even worse.
And as GazB mentioned; Assad & Gaddaffi got no reward for their overtures to Western powers either. 10 years ago the Assads were guests of Tony Blair in 10 Downing Street. But when it became convenient, the same political leaders in Europe, Turkey and the Arab states turned upon them as if by a flick of a switch; previous words and discussions about 'Westernisation' and reforms became instantly irrelevant; they were turned upon like a vulture swoops down on a carcass.

And for all the talk on European values, human rights, etc... Gaddaffi died like a dog. So too will anyone else who opposes America. Like the mafia, they never forget their enemies.
GarryB

And for all the talk on European values, human rights, etc... Gaddaffi died like a dog. So too will anyone else who opposes America. Like the mafia, they never forget their enemies.

Just look at Saddam... half his lawyers were executed too... is that democracy?

We are the Ego Borg... different from the Star Trek Borg because we believe we have assimilated enough to be superior and have nothing to learn from anyone any more so we just replicate ourselves... we don't bother trying to learn.
As Sa'iqa

GarryB wrote:Just look at Saddam... half his lawyers were executed too... is that democra

Democracy means a system of governance in which people decide who rules over them.... It has nothing to do with capital punishment or lack of thereof.
GarryB

Wrong... in a democracy there is no interference in the judicial system by politicians or politics except in very extraordinary situations.

In a dictatorship or faulty democracy the judiciary is a tool to enforce a totalitarian state along with secret police etc.

When 3-4 lawyers defending Saddam are executed for defending him... what sort of fair trial was he going to get?

We all know he was no saint... was it really necessary to kill those defending him to get a conviction?
xeno

Is that from an existing contract, pre-war?

They got some Khrisantema systems, wonder if that is a contract to be partially fulfilled.
TR1

Yep, it is the pre-war Khrisantema: 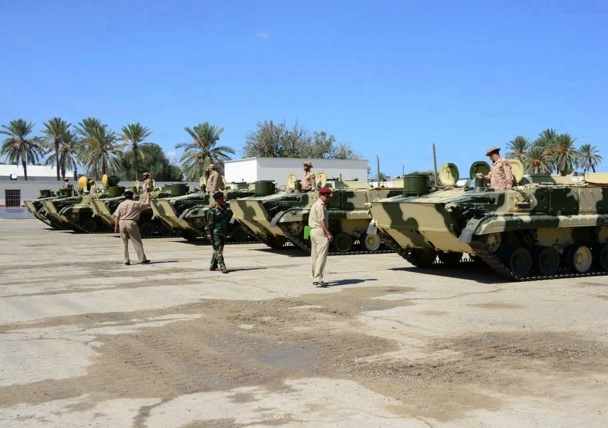 Remember everyone claiming Libya would not forget Russia's reluctance to go in, Russia would never get a deal, blah blah blah?

Lol, so much for that.
Viktor

libya is not even a functional state but devided by militia warlords and we manage to sell them arms? i hope the payment was already made befor we somehow delivered them
Viktor

It was about time

"We want Russia as a great government to aid in rebuilding stability and the military might of Libya," Thinni said on the eve of his official visit to Russia on April 14.
"This is the main reason for this visit," Thinni added.

The prime minister also said that the Libyan government was planning to implement a number of contracts signed between the Gaddafi regime and Russia in 2008.
"There are several contracts we would like to reactivate," he added.


Libyan Information Minister Omar al-Kuayri said that the issue of delivery of Russian military boats is now being considered by the experts.

CAIRO, July 27 - RIA Novosti. The Russian side has agreed to supply to Libya of military boats, he said in an interview with Sputnik Information Minister Omar al-Kuayri.

"I visited the factory for the production of military boats in Russia, and Russia agreed (to put them - Ed.). Now the issue is considered by experts" - said al-Kuayri.

Since the overthrow and murder in Libya in 2011, leader Muammar Gaddafi's country is experiencing a period of schism. In the political arena oppose liberal forces, supported by the army, and representatives of Islamic parties that support groups of former rebels. As a result of unresolved differences appeared dual power in the face of an elected parliament and the pro-Islamic Natskongressa. In a number of areas of Libya did not act neither of the central authorities. In the absence of strong government influence in some regions capture the terrorist groups associated with the "Islamic state" and "Al Qaeda".