Brazil appeared to be taking sides against Britain in the long-running dispute over the Falkland Islands by refusing permission for a Royal Navy ship to dock in Rio de Janeiro.

HMS Clyde, which patrols the waters around the Falklands, was forced to switch course to Chile after being rebuffed by the Brazilians.

The snub was being seen last night as a clear sign that new left-wing Brazilian President Dilma Rousseff was trying to curry favour with Argentina.
Snubbed: HMS Clyde, pictured in Portsmouth, was forced to switch to Chile after the rebuff by the Brazilians

Snubbed: HMS Clyde, pictured in Portsmouth, was forced to switch to Chile after the rebuff by the Brazilians

Miss Rousseff is due to visit Buenos Aires next month to discuss improving trade relations on her first official trip abroad.

Up until recently, Britain has enjoyed a cordial relationship with Brazil and the Navy has never been prevented from docking at the country’s ports.
New approach: Brazil's President Dilma Rousseff, pictured in Brasilia yesterday, is thought to be playing the 'anti-colonial' card

But Argentina has increasingly tried to put pressure on its neighbours to make life difficult for the Falklands patrol ships.

And foreign policy analysts claimed the new Brazilian president was trying to play the ‘anti-colonial card’ to satisfy the left-wing factions of her Worker’s Party.

In September last year, HMS Gloucester, a type 42 destroyer, was barred from entering Montevideo in Uruguay to pick up fuel and supplies.

It was the second time Argentina’s much smaller neighbour has blocked British ships to show solidarity in the Falklands controversy.

The Argentine government of President Cristina Fernandez de Kirchner was said to be ‘satisfied’ at the Brazilian move, according to the newspaper Clarin.

A Foreign Office spokesman tried to play down the incident.

He said: ‘We can confirm that HMS Clyde had planned to make a routine port stop in Rio de Janeiro in early January.

‘Brazil did not grant diplomatic clearance this time. We respect Brazil’s right to make such a decision. We have a close relationship with Brazil. 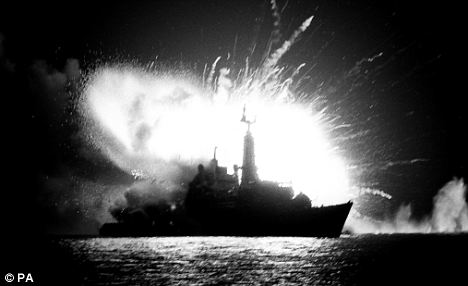 Flashback: An Argentinean bomb exploding on board the Royal Navy frigate HMS Antelope, killing the bomb disposal engineer who was trying to defuse it, in 1982

If Brazil really does want closer ties with Argentina then of course this sort of thing makes sense... and considering the damage colonial powers have been responsible for in Central and South America I think it is a bit rich calling them anti colonial.

The UKs actions over the Falklands war are completely colonial in nature so painting those who oppose such actions by the UK as "anti colonial" merely emphasises the colonial nature of the UK in her actions.
Vladimir79

Brasil just signed a military cooperation pact with UK, guess we can throw that out the window now. France is their dominant partner.

The US had a pact with central and south American countries that basically secured them as US "puppets" in return for protection from Uncle Sam from external threats.

Problem was that the US was thinking of threats from the Soviets and in 1982 the threat actually came from the British.

Turned a few central and south american countries against the US at the time.
Vladimir79

The US and UK are basically non-factors in the region. France, Russia and China are the ones fighting for the roost.

Well a leftist Brazil just sided with Argentina... perhaps encouraging them to group together could lead somewhere.

Perhaps an offer of Su-35s to Argentina might be appropriate in the near future?

There was talk of Brazil with the PAK-FA, but that might just have been all it was.

There is no reason why Russia, France and China can't all sell to countries in the region... most of the countries fly ancient model F-16s if they have been allowed to by the US, otherwise they operate F-5s.

Personally I think this would be a good region to "donate" some older surplus material to to generate some good will.

Obviously only where the material will be of use to the recipient... and of course setting up some facilities down there to upgrade and overhaul material means support will be greatly improved which will further improve sales prospects.

It is pretty expensive to get parts and servicing for Soviet material down there, it is a long way to send an engine for full overhaul and then to have it sent all the way back. Makes things very expensive and increases down time.

Having friends in that region also makes naval deployments easier if they can have more places they can stop off at.
Vladimir79

GarryB wrote:Well a leftist Brazil just sided with Argentina... perhaps encouraging them to group together could lead somewhere.

Perhaps an offer of Su-35s to Argentina might be appropriate in the near future?

Argentina is too poor for new Su-35s. Talk has been modernising their French fighters along with buying used M-2000s. It would make more sense for FAA.


There was talk of Brazil with the PAK-FA, but that might just have been all it was.

France has pretty much cornered the Brasilian market for high ticket items... Rafale is pretty much a sure deal there.


There is no reason why Russia, France and China can't all sell to countries in the region... most of the countries fly ancient model F-16s if they have been allowed to by the US, otherwise they operate F-5s.

Venezuela is proving to be the lucartive market for Russian products, it will nice to see if a few more countries will be willing to lean that way. Brasil bought Mi-35s and hope they will buy some SAMs. Mil helicopters are selling well in Ecuador and Peru. It is a diverse region with competitive interests. We need to keep China from getting a competitive foothold. Partnering with France might be a wise idea for market penetration.


Personally I think this would be a good region to "donate" some older surplus material to to generate some good will.

Donate with the hidden context of "maintenance contract." lol


Obviously only where the material will be of use to the recipient... and of course setting up some facilities down there to upgrade and overhaul material means support will be greatly improved which will further improve sales prospects.

I believe Mil is setting up a maintenance depot somewhere over there.

I remember reading somewhere that there was a helicopter maintainence depot to be set up in Mexico I think.

Plus I was thinking of meat and potato items regarding sales like Su-25s... even NATO countries don't really need that level of fighter (though that wont stop them from buying them).

Other items that might sell are military transports like the Il-476, and of course helos of all types... even perhaps the attack version of the ANSAT could be developed into a nice cheap little COIN aircraft.

Small arms, RPGs, APCs, artillery... all sorts of stuff that is probably a bit obsolete and in need of replacement.

This shouldn't be a rush but a properly planned thing so that for instance a country doesn't get stuck with an aircraft they don't need and can't get spares or support for without taking the damn thing to bits and sending it on a 6 month ship ride to home base to get fixed.

Regarding Argentina... you are probably right... getting them to buy Su-35 would be dishonest and would not only be the sort of thing the IMF would do to control that country in the UN but it also might lead to them getting ideas that will make things much worse and lead to perhaps Russia having to choose between Argentina and the EU. (I was going to put Argentina and the UK but that choice might not be that hard for Russia at the moment).

At the end of the day it is better if military weapons are sold but not needed.

Actually I seem to remember reading about a joint venture between a Russian company and Argentina to create fish farms down there for caviar... so the trade does not need to be all military... other ties would be good as well. The military can be the toe into the market so to speak.

Donate with the hidden context of "maintenance contract." lol

Or indeed... if you like this then look at this upgrade that makes it all weather and night capable.
Vladimir79

Brasil is setting iself up to become the major supplier of arms to the region. Everyhting they buy now must include ToT. Setting up hubs in Brasil to supply the rest of latin America might be a good way to go. It lowers the price of products while you still get market penetration with a local with all the clout.
Hoof

Damn, you all are so smart... makes me wonder, what the heck do governments actually do ? we all think of such interesting things that could actually work =)
George1

LONDON — Britain has taken a significant step toward updating its air defenses on the Falkland Islands by kick-starting a competition to supply a key element of a new ground-based system.

Defence Ministry officials recently briefed industry on its requirements for a battle management C4I system and have triggered the process toward selecting a contractor to do the work by issuing a pre-qualification questionnaire.

An MoD spokesman declined to confirm the system is destined for the Falkland Islands, saying that commenting on deployment details is "inappropriate" at this time.

Industry sources, though, said the BMC4I system is scheduled to head to the British overseas territory in the South Atlantic, some 300 miles off the coast of Argentina.

Britain and Argentina fought a bloody war over the islands in 1982 and the dispute concerning sovereignty of the territory, known in Buenos Aires as the Malvinas, continues to rumble on diplomatically.
Mattke

This is an old dsispute, they even went to war for it, but a solution which both will be happy will not be very easy.
Sponsored content