It is more tragedy than comedy. Like the Germans advancing on Moscow not having the right clothing (or supposedly so)
because high command assumed it would win before the onset of winter. I am not surprised that the British army is not
really prepared for Russian winter war.

OMON members, I don't need to tell you which decade 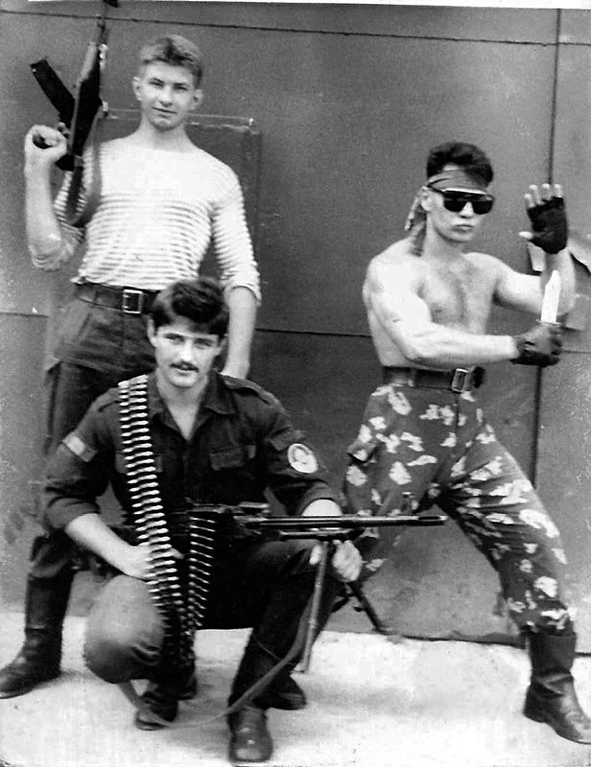 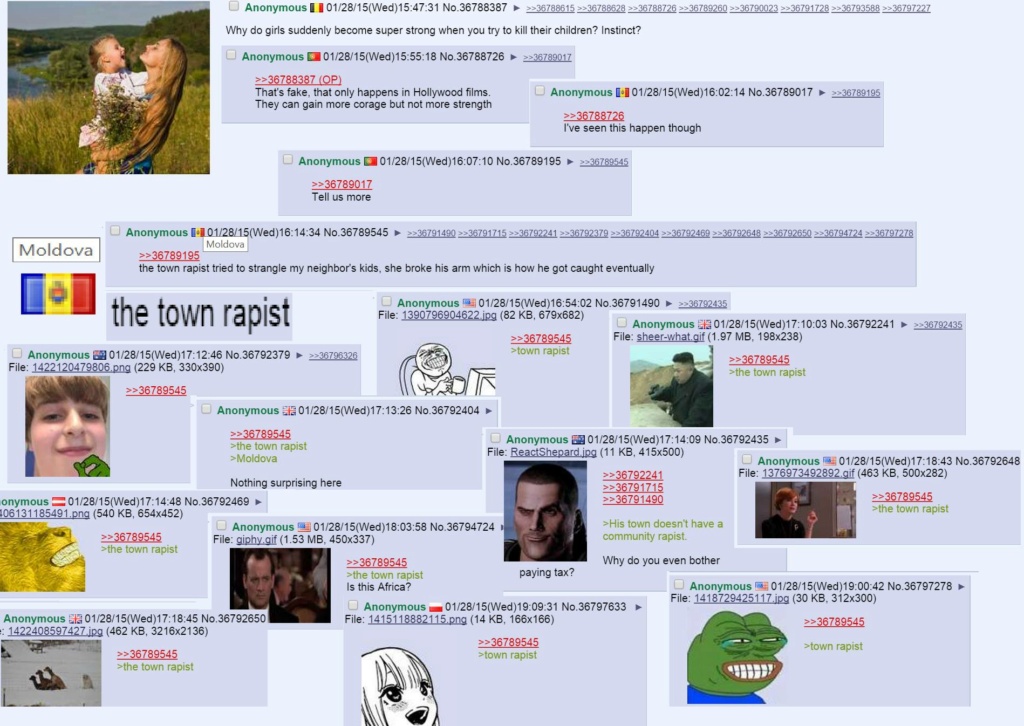 So, does he get paid from government budget or do all townfolk just chip in?

. i was going to Norway in 2007 and i was myself forced to buy proper winter gear for my training while i was still in NATO.

And thank god i did.
Otherwise, i might have a few finger's less to type with loss to Frostbite.

Some must-have item's an NATO soldier has to buy himself: an heavy SnugPak, PETZL headlight, Leatherman, an Magnesium Block, and an Garmin capable Glonass/GPS.
Because.....NATO is too fucking cheap to supply the proper gear

NATO:"oh we have GPS, Take this thing the size of an refrigerator with you, with Battery's larger than your mother-in-law's dildo's. But you still have to calculate what the hell the longtitude and lattitude mean"

NATO" "are you cold?, then grab that frozen husky outside your shelter and smash your squaddie's head to claim his winter gear".

*random elderly tourist standing next to us in Norway, skiing on proper gear*
"good day boys".
Good day Ma'am"
"you guys look in not to good shape".
"ah, we are doing okay".
"really?...".
"no,...we are moving here with just one avalance-beacon for the 14 of us, our shitty 1960's radio puts us outside any effective radio range anyway to call for help. And we can't even ski...because we are walking on dry wood skis where the snow sticks to in clumbs making us unable to freaking ski".
"oh....that sucks....sounds like your army should have not made budget cuts!".
*ski's away with her husband like they are riding on super-lubricant with no effort at all*.
We: ".....**** this job....".

Thanks for the first hand information. NATO command must be staffed with affirmative action hires. Do they even know what
caliber of bullets to supply.
Airbornewolf

kvs wrote:Thanks for the first hand information.   NATO command must be staffed with affirmative action hires.   Do they even know what
caliber of bullets to supply.

No problem, you are welcome.
Please ask another bad memory from my catalogue of 10 years of NATO Nightmares...in Service

Ordering the Right Munitions?. No they even screw that up at times.
Take my word for it, i did the job of ordering munitions, only when i did it it went according to plan.
Lets just say it often went NOT according to plan.

We as NATO are one big happy fammily!

Except, The U.S is the asshole uncle that is that gun-nut. And they take the whole convention of Geneva a bit loose when it comes to using ordnance. Sure....white phosporous is just for "creating smoke" and "those misplaced canisters of VX are better put to good use".

the EU is acting like the retarded nephew take the moral high-ground: "tee-hee!, only play war the enviromental responsible way and by the book!. Unless Uncle U.S is mean again and twists our Wrist

Eastern Europe members be like: "you both are not right in the head,...why are we even here!?!

I kid you not, when we ran out of ammo, the american's offered to help us out, (an EU army) with emergency replenishment.
the US shoots 25 MM, and we shoot 25MM. what can possibly go wrong?!?

Turns out, quite a lot actually.

First off, the EU only uses this special AP non-nuclear compound to manufacture armor-piercing munitions.
The U.S uses only depleted uranium. it is not...beneficial for your health to be long-term around that shit.

This random EU army stored this munitions at first under their beds as they did not know what "APFDS"means.

At the firing range, crews noticed this munitions went trough anything!. awesome!. Altough....what where all these plastic caps exiting the barrell?.
Better ask Command.

Then came some people suddenly out of an helicopter with geiger counter's.
oh yes, this stuff gave off radiation.
perhaps not much, but it sure makes a dent into you baby-making plans if you are dumb enough to store this shit under your sleeping stretcher.

Also, the gunner's could shoot at 1.5 the range they where used to, awesome ammo!. why did they not used this before!.
There was a bit more recoil but damn!. this stuff was good!.

That was..., untill two days later the gun barrels simply flew out of their breaches forward from their turrets.
This was because the U.S Munitions use more propellant in their rounds, it was beyond the Oerlikon's 25 MM gun mount specifications for the designed munitions.
It litterally broke the bolts keeping the barrel in place.
either the rear breach fly's back into the APC, or the barrel let's go first.

that AGL version is designed to fly to an range of 2200Meters.
In anyone monkey brain it should ring an alarm bell that your underslung reaching just 400 Meters might not be the same version.

Yet, there are enough soldiers that experience that the hard way in NATO every year....
How they cram an AGL round into their underslung and are suprised they rifle break's in half and missing a few fingers if they are unlucky.

DU is also toxic because it is a heavy metal and when it impacts it produces a lot of fine mode aerosol that can be inhaled.
Iraqis were subjected to DU poisoning since the microscopic and smaller than a grain of sand fragments fall out on the ground
and are then blown around by the wind like all the other dust. But who ever said all is fair in love and war.

Yes, ironically DU is spent fuel rod material, so the radiation you get from it under the bed is not enough to worry about... often background radiation is higher.

But fire it out of a gun and it reacts with steel... it softens steel and tends to burn leading to a very very fine dust in the air and then it is really a serious problem, because the human body detects this fine dust material and thinks it is a type of calcium and uses it in rebuilding bones, so the very weak radiation it gives off that can't penetrate skin comes into direct contact with your bone marrow and red blood cells and is very very bad for you.

It is described as being genotoxic because it mutates and damages genes at a cellular level.

Not a question of not having kids, more the trauma of what sort of physical and mental defects they end up with... not having kids is probably the best choice. 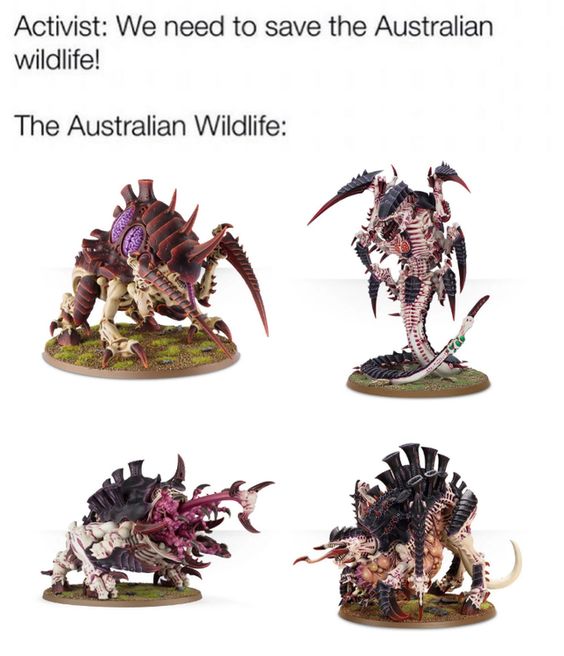 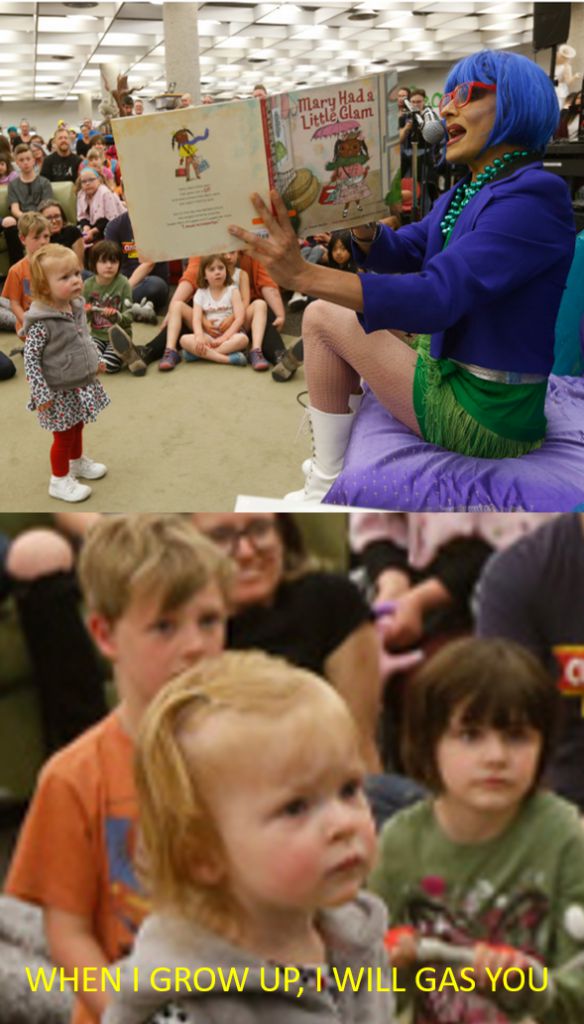 You have got to be kidding me!!!

You have got to be kidding me!!!

It only gets better.

Eat your heart out Bollywood. There is a new contender in town. Nollywood. 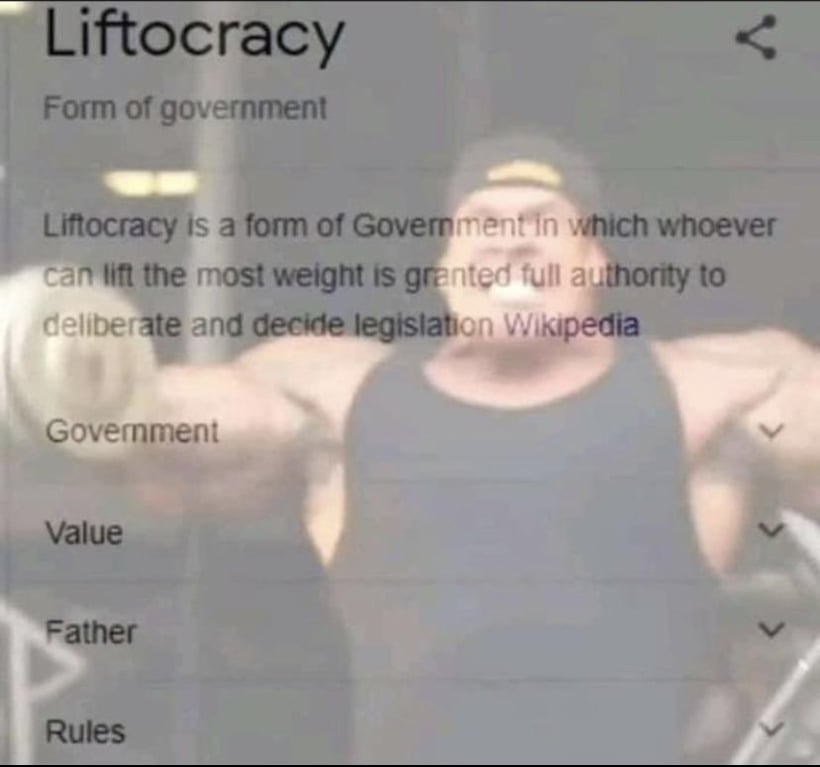 Those African movies are great... in the 1980s there were a whole lot of really bad movies that were low budget but not meant to be amazing.

There were lots of space movies in the 50s and 60s that were funny too...

My favourite from the 80s was a series called the Toxic Avenger... a hopeless nerd falls into toxic waste and becomes big and muscle bound and strong.... you know... they way it does in a movie and does not in real life... in real life you suffer and die... in a movie you become a vigilante hero.

BTW @PD... this form of government is endorsed by the state of California...
PapaDragon 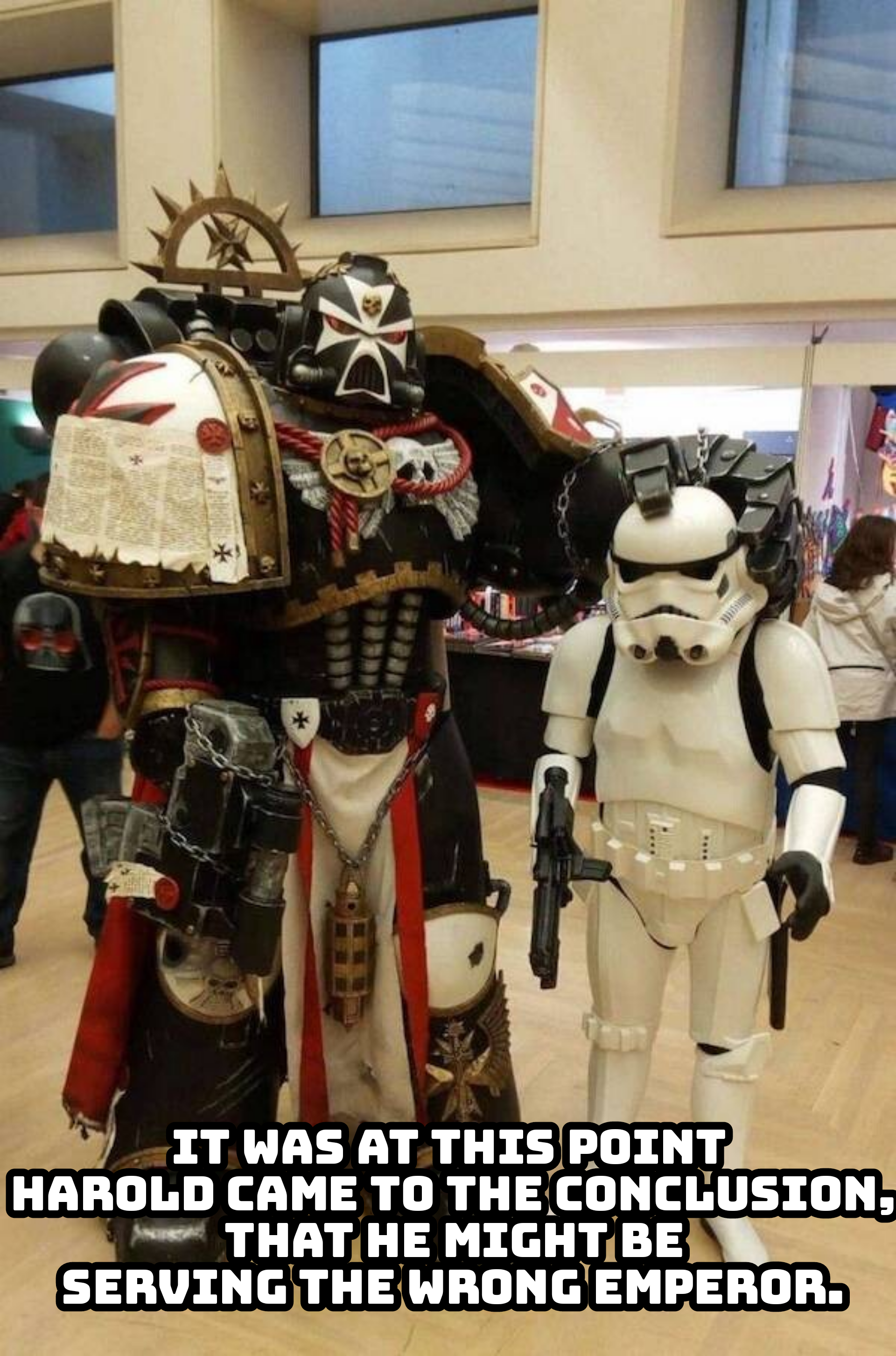 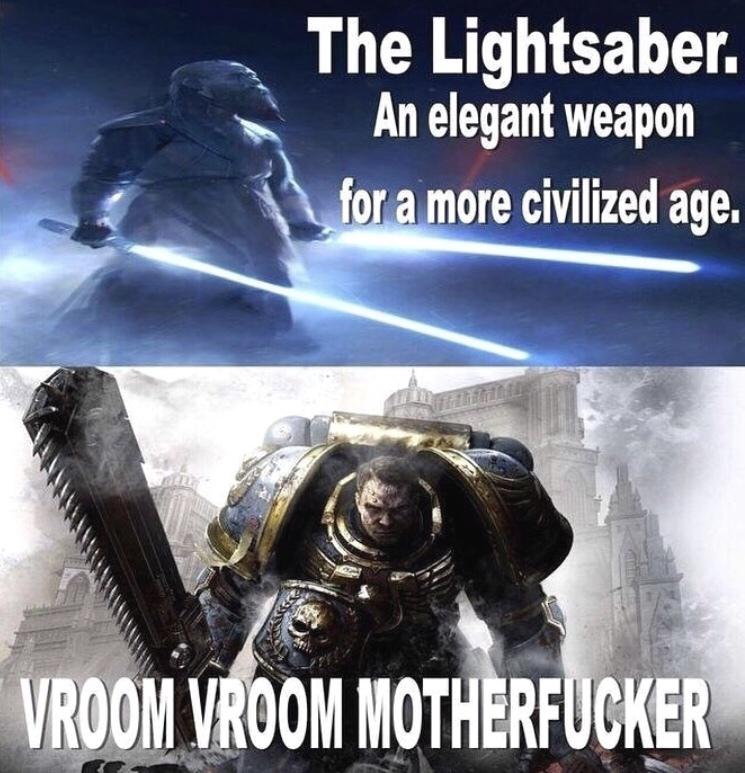 Its a chain sword - a sword with a chainsaw for the blade.

Its a chain sword - a sword with a chainsaw for the blade.

Perhaps we have another willing servant for the Golden Throne here?.
Or maybe you like something a bit more...Heretical?

Other universes use jump drives and nothing bad happens.
40K's way of space travel is going trough litteral Hell itself.
And if your ships Gellar Field fails, Hells deamons and Monsters come aboard to Feast on you. 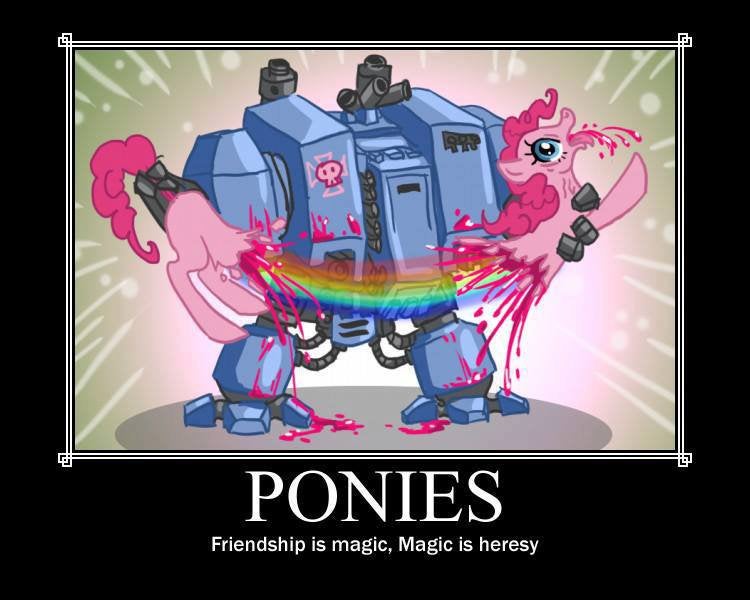 Looks more like this than any chain saw I ever saw or used...

Looks more like this than any chain saw I ever saw or used... 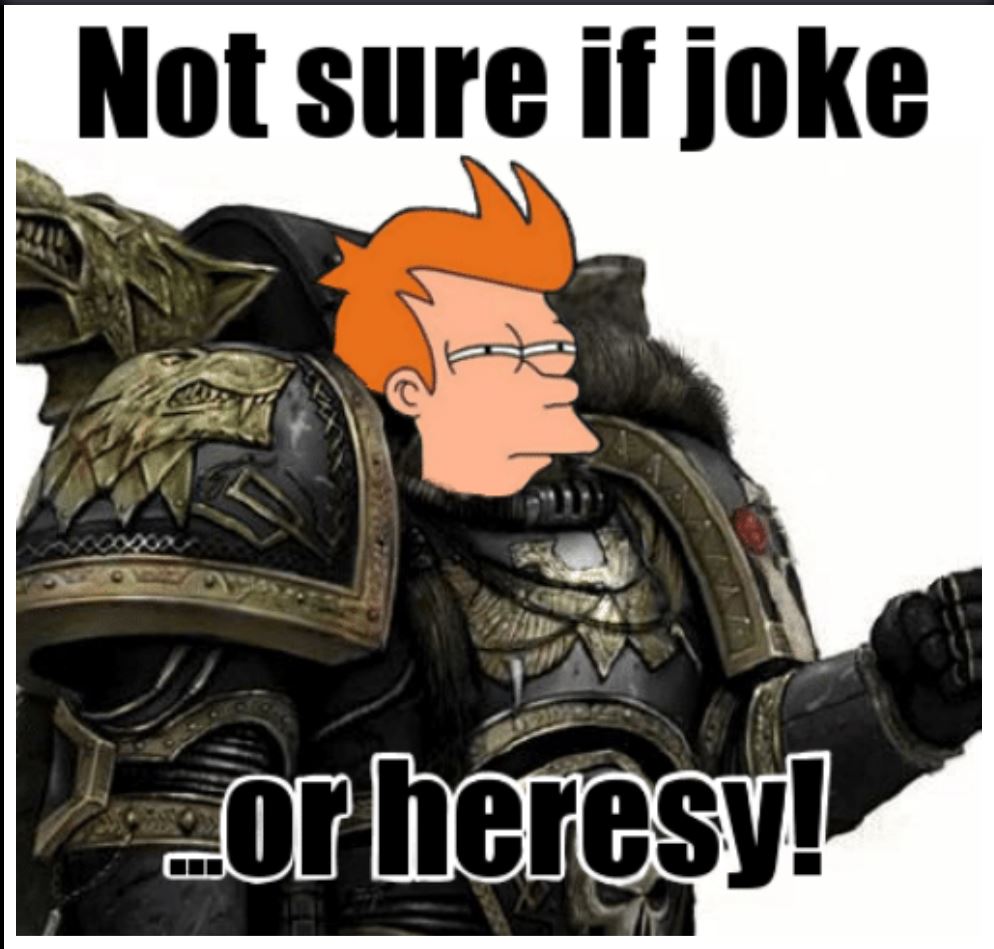