This little fighter has a bright future.


According to him, the negotiations on this position is scheduled to begin in the spring.


"The talks will begin soon, and the sooner they will be finished, the better for Russia and the Corporation" Irkut ", - the deputy director general of Rosoboronexport.


Earlier, Bangladesh, Russia provided a loan of $ 1 billion. The loan was announced during a visit to Moscow, Prime Minister of Bangladesh in January 2013.

Yak-130 - it's training and combat aircraft developed by Yakovlev. It is equipped with an integrated digital control system, which allows the switch to automatic control. Also equipped with an active system for aircraft flight safety, which in the study can be reprogrammed to stability and controllability characteristics. Yak-130 allows pilots to prepare for planes 4 and 5 generations.

So this deal is settled too ...

No MiGs or Sukhois though?

They had trouble maintaining their Mig-29s, so I suspect a LIFT is probably more suitable to their needs.

Having said that the early Mig-29s were fairly maintainence intensive... designed for war instead of peace time.

Things were replaced on a schedule rather than subject to inspection, which is expensive as the schedule is understandably conservative to prevent accidents.

That means if a part can be worn out in as little as 200 flight hours in harsh conditions when the aircraft is roughly used then the schedule might require its replacement every 100 hours to ensure it does not fail. Of course you might find with careful inspection that that part might be good for 1,000 hours or more depending on the conditions.
d_taddei2

I think the YAK130 is a great little aircraft thats cheap to buy and maintain, and it can be used in all roles trainer, light attack, recce, anti air, anti ship/sub, aswell as being able to operate from unpaved and grass strips.
It might not meet Russian pilot protection standards but its still a cheap alternative to flying higher cost aircraft during peace time operations, ideal for recce and maritime recce.
Its also a capable light attack/anti air/anti ship/sub aircraft, and although it will never be as good as the higher cost aircraft its still cheap and capable. Syria seem to be doing alright using their Areoo L-39's as attack aircraft, having only lost a 2 or 3 in 2 yrs of conflict.

Its also a great aircraft for defence forces or countries with a small military budget. I think some African, central and south american countries could be potential customers for the light attack role, and anti drug and COIN operations.

Does anyone know if any country has adopted the YAK130 as light attack?
GarryB

It also has dial in performance so it can simulate the flight characteristics of various aircraft like the Mig-31, Mig-29, Su-27, Su-35 etc.

Regarding its performance as a military fighter light strike aircraft... the standard model lacks a radar, but fitting it with a targeting pod like Damocles would actually make it a rather potent little aircraft.

The Russians have a wide range of air to ground weapons that use either IR guidance or laser spot seeking heads for which the Yak would be fine.

An F-16 dropping a laser guided bomb from medium altitude is an effective modern weapon of war... the Yak could certainly do the same.
d_taddei2

Quite agree garry, with very little upgrades/modification, the Yak130 becomes a cheap versatile attack aircraft, especially if they are facing insurgents. or low tech enemies.

A bit off topic has Russia ever had/made a light strike aircraft like the T6 Texan or other turbo prop COIN aircraft???

I know the SU-25 covered this role.
GarryB

For aircraft designed for ground attack they tend to protect it with armour which makes "light" a nominal term in this case.

The also have a light border patrol aircraft with a single engine called the SM-92... don't know if it is still in service be this is what it looked like: 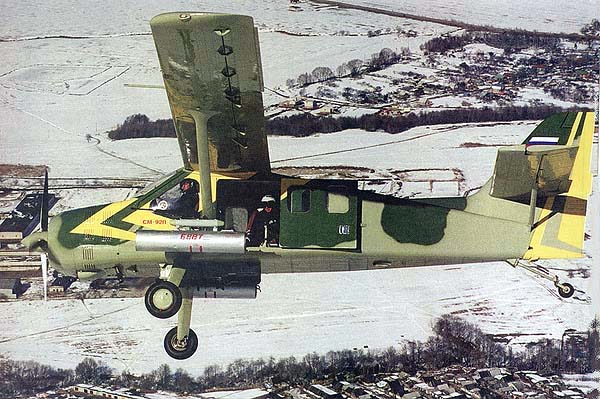 With attack helos and CAS aircraft they have not so far gone the American route of the C-130 type gunship AFAIK.
GarryB

Fitted with a small radar... perhaps the 80kg AESA being developed for the naval Ka-52K the Yak-130 would be a potent little fighter aircraft... a modern subsonic Mig-21... slower but better armed and fully multirole.
d_taddei2

thanks garry for the info, looks pretty cool, ive always been a fan of the AN-2, it would be pretty cool to see a Russian version of USA hercules gunship, wonder what aircraft they would use?

good that you compared the yak130 to the mig-21, some countries are still using them and the yak could be a good replacement. That way they would only need to operate one tpre of aircraft as the yak can be used as a trainer and for other combat missions. Also would help when coming to place an order and spares parts.

Think they would also be ideal to be used in conjuntion MI-35's in supporting ground troops. where SU-25 were in short supply.
GarryB

pretty cool to see a Russian version of USA hercules gunship, wonder what aircraft they would use?

A contemporary model could have been the An-12 with a 122mm gun and a 57mm gun and a couple of GSH-30-6 gatlings, but these days I would go for something modern like the MTA or An-70.

The idea is a bit moot however... you would need complete air control and it would still be pretty vulnerable...
Viktor

Next year Russia will start deliveries of Yak-130 operational trainers to Bangladesh under a contract for 16 jets of the type, Voenno-promishlenniy Courier reports with reference to Director for Special Commissions of Rosoboronexport and the head of the company’s delegation at DSA-2014, Nikolay Dimidyuk.

«We have signed the contract recently; Irkut Corporation is the main contractor. The deliveries will be started in the second half of 2015», - the source said. He reminded that Yak-130 jets will be purchased by Bangladesh in the network of a $1 billion credit granted by Russia and intended for purchase of military equipment.

«We have sold 16 jets of the type to Bangladesh and many APAC countries are interested in Yak-130, because it has proven itself under severe conditions», - Dimidyuk added.

Rosoboronexport reported earlier that the company is negotiating deliveries of Yak-130 jets to 10 countries. Experts believe that successful promotion of Yak-130 at the global market is connected with the fact that Russian air forces have put the jet into service. Under the contract signed in December 2011 by Russian Ministry of Defense and Irkut Corporation 55 Yak-130s must be delivered to the air forces during a period until 2015.
Viktor

Bangladesh is going to buy Russian submarines and naval aircraft


Bangladesh intends to discuss with Russia the purchase of her aircraft for naval aviation, as well as two diesel-electric submarines

INDIA ENCOURAGES BANGLADESH TO PURCHASE RUSSIAN SUBMARINES INSTEAD OF CHINESE

This May Russia will start deliveries of Yak-130 operational trainers to Bangladesh, RIA Novosti reports with reference to Senior Vice-President of Irkut Corporation, Vitaly Borodich.

“In May deliveries of Yak-130 jets to Bangladesh will be started. A total of 16 aircraft will be delivered to the customer,” Borodich said at Aero India-2015 airshow.

Yak-130 is the two-seat next-generation operational trainer designed for pilot training and combat missions performed under normal and severe weather conditions. The jet is capable of destroying ground and air targets.

This aircraft demonstrates the parameters close to advanced fighters at subsonic speeds in terms of aircraft performance and maneuverability. That is why it is used for training of future pilots of “4+”-generation and fifth-generation fighters. Moreover, it may be operated from unpaved runways.
Viktor

Said to be the first one: 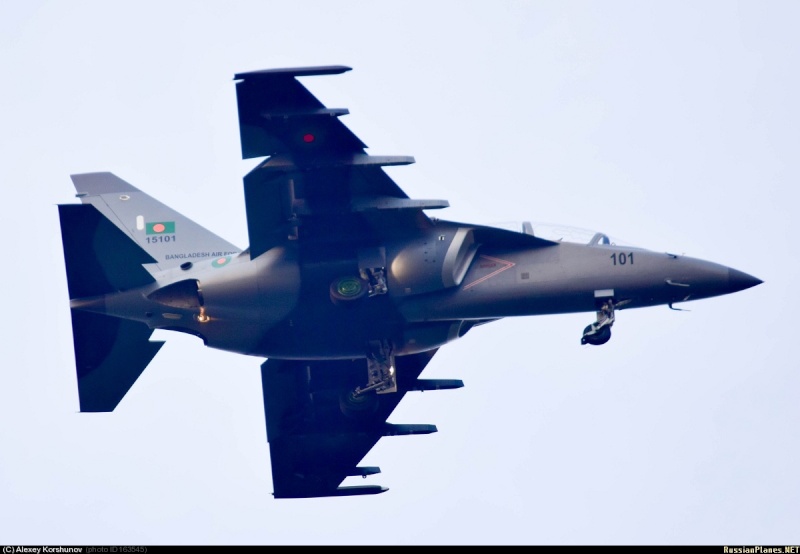 First image of it in BAF cammo: