I bought and restored two Merrill carbines from the American Civil War era.  Had so much fun, that I had to build this website to share what I've found - https:\\jameshmerrilltribute.smugmug.com.  I've read two authors who've mentioned (without proof) about a Russia connection with Merrill.  Been searching a long time for evidence of Merrill spending time at the Sestroretsk Armory in St. Petersburg in the mid-1850's, as well as any business relationship with Tsar Alexander II and arms sales to the Russian military/government at the end, or shortly after the American Civil War (1864-66).  Maybe the Tsar connection was from the 1850's and not the 1860's - just want to know for sure.

Someone from Ivanovo, who's an antique firearms researcher, contacted me via my website.  He sent me a photo of a carbine that looked similar to Merrill's early firearms that he contracted Remington to manufacture for him.  My Ivanovo connection hit pay dirt with a link to the St. Petersburg archives, that summarized documentation (in physical archives, not online) in 1856 where Merrill's breech loading lever technology was applied to 100 Russian firearms.

If you go to my site, you'll see on the home page a link to the page where I see two matching firearms, one here in the US (PA), and the other at the Ivanovo Museum.

My Ivanovo connection ALSO sent me an awesome Weapons magazine pdf from November 2013.  I believe that on p.47 the author details the Merrill firearms converted with Merrill's breech lever technology.  Unfortunately, all the contents are in Russian (and images only, so I can't use translate.google.com), and the entire document is password protected.

Would anyone know a way to contact the author, Aleksey Nikolaevich Klishin, expert on cultural values, melee weapons and firearms, Ministry of Culture of the Russian Federation.  I emailed the ministry to see if they could put me in contact with him, but received a reply that I need to fill out some form in person.  I'm in the US.  I'm hoping Aleksey will consent to providing the page in textual format so I can translate, or have him translate the page and send to me. 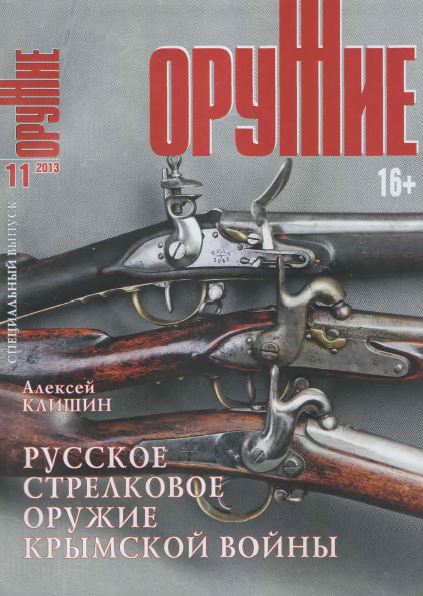 en shot of the magazine cover.  Hope someone can help me out.  Thanks, Eric in WI, USA.
GarryB

If you go to the Yandex site:

You will see across the top text, site, document, image.

Then click on the select file link in the middle of the page.

(do this first) In the pdf file you have open the page you are interested in and expand it so the text is big and clear and take a screenshot and then save it onto your desktop.

When you select the find the saved screenshot image and it will process the page looking for the text which it will highlight in yellow.

Click on the yellow to see the translation from Russian to English.

BTW it is a forum rule that users post an introduction in the introductions and rules section...

If the file wasn't 15MB and password protected, that yandex link would likely work fine. For online sites that accepted the file size, the show-stopper was the file password protection. Think my only next step is to somehow find and communicate with Aleksey.
GarryB

Didn't think about the filename.  File is "Клишин - оружие Крымской войны.pdf".  Please let me know if you have any luck.

If anyone can by my researcher at the St. Petersburg Archives, please let me know. There are 44 pages of wonderful historical data regarding Merrill and converting 100 Russian rifles. Thanks.
GarryB

I find it hard to search because I don't speak or read Russian but on using Yandex search it came up with this page:

The image of the book is the same as this book:

(note if you left click on the big blue download button it will verify the book is intact and available and then show a screen with a green go to pdf button... I normally right click that green button and choose save link option... select a location to save the file and click OK to download.)

These files are pdf and not locked or protected... just open with pdf viewer and go to section of interest and take screenshots to translate with Yandex.
Guest

Bummer the suggestion didn't work for me, nor did searching another couple hours make any difference. Then, my wife looked on her iPhone for an app (will post later), took a few screen shots and sure enough just about all the Russian words were translated to English. I'm having her try one more time with better resolution/lighting to see if everything translates.