Isos wrote:They can't live democratically because every difference is a reason to fight.

This seems to be a major problem with these people of colour - Arabs, Hindus, Blacks etc. Always looking for a fight. Always determined to break rules in their own shithole countries and the Western countries they migrate to.

People of colour are extremely violent because of their low IQ that leads to limited reasoning skills.

People of colour are extremely violent because of their low IQ that leads to limited reasoning skills.

I would say it's because poor people come to power so they want to stay where they are and in the same time other poor guys wants their places.
jhelb

Isos wrote:I would say it's because poor people come to power so they want to stay where they are and in the same time other poor guys wants their places.

How often do Whites resort to violence? Most anti social elements in the world are dark skinned people. When they are not beating the daylight out of you, they are cheating you.

Dark skin tends to make people violent. They can be as violent as they want or cheat as many people as they want but they should carry out these antics in their own country and not migrate to Russia/Europe, North America and create problems there.
GarryB

The super power state is white... why has it not fixed all the problems of the world?

Why are American solutions in the middle east dumber than no solution at all?

Lets take three functioning democracies and destroy them.... Iraq, Syria, and Libya... of course you could argue they were not democracies, but one could lay the same accusation against the UK, Australia, New Zealand, the US, Canada etc etc... where there is rarely more than one actual choice anyway.

White countries regularly murder millions of non white people... when one white holiday maker gets in the wrong place at the wrong time and gets killed or even just kidnapped the western media go apeshit and you hear nothing else until something else happens.

You would think more intelligent non violent people would have more respect for all life rather than less... but it is OK because pretty soon all guns will be banned and you will have to do what you are ordered to do by the rich... no matter what their skin colour.

Back on topic please or this thread will be locked.
AbdulhamidtheSecond

This is how a relationship between a White and a Black country should be.
ahmedfire

The Head of the liquidity crisis management committee at the Central Bank of Libya, Ramzi Al-Agha, told Al-Arabiya Net that the governor of the central bank, Al-Siddiq Al-Kabir, changed the operations of managing financial reserves and created a set of time deposits of about 4 years without any return – zero deposits – with the value of $8 billion deposited entirely in the Central Bank of Turkey.

Al-Agha pointed out that these deposits, according to the agreement signed between the Head of the Presidential Council, Fayez Al-Sarraj, and Turkish President Recep Erdogan, will remain in Turkish banks for a period of 4 years without any interest or costs for the stability of the Turkish lira and the protection of the Turkish economy.

Al-Agha added that the meeting of the Governor of the Central Bank, Al-Siddiq Al-Kabir on Monday with Turkish President Recep Tayyip Erdogan, is contrary to the protocols and norms among countries, as such meetings are supposed to include at least the Prime Minister of the GNA 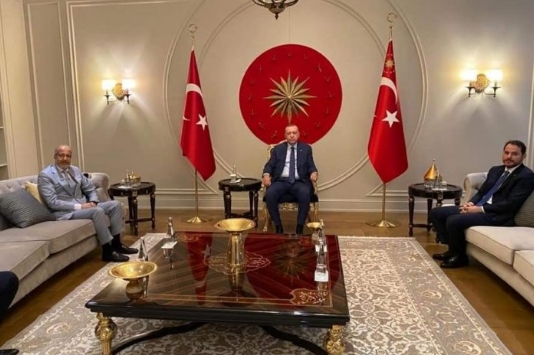