I would like to add for the record that after seeing that first vid when it aired, i immediately unsubscribed from the YT, so yea Vann was right.

Lol yeah, The Young Jerks network, those moonbats are laughing stocks. Cenk Uyghur likes to posture like some free-thinker, but the guy was on MSNBC, reading scripts and kissing Obama's ass like the 'Kool-aid' drinker that he is. What I find the most funny is that their limp-wristed network has a token Armenian, nothing more ridiculous than a supposed Armenian who has no problem working for a psuedo-progressive opinion network (as opposed to journalism) in which it is  ran by a Turk, in which that organization is named after the genocidalist far-right wing Young Turk regime, in which that Turk that runs the network has an irrational seething hatred for any and all things Russian lmao! Could you imagine a so-called 'progressive' network named after the Ku Klux Klan, in which Black employee's defend the naming of the organization? Or a so-called 'progressive' network named after the Brownshirts, in which Jewish employee's defend the name of that organization lol?

guy's MIA for quite some time now... must be getting that nanomachines upgrade- how do you say "nanomachines, son!" in russian?

collegeboy16 wrote:guy's MIA for quite some time now... must be getting that nanomachines upgrade- how do you say "nanomachines, son!" in russian?

5 most ridiculous theories about the whereabouts of VP
Morpheus Eberhardt

Where is Putin ? he disappeared for several days
sepheronx

He wasn't on the news only other than photos of his appearance. Maybe he is not feeling well?
magnumcromagnon

sepheronx wrote:He wasn't on the news only other than photos of his appearance.  Maybe he is not feeling well?

Apparently he had some back pain, considering all his years of Judo practice:

Too much fixation on Pootie. By lovers and haters.

I didn't even notice he was gone. Whaddaya know, the country just kinda runs itself!

Anyway, to be serious for a moment, the Russian MoD are testing Putin response times.
magnumcromagnon

flamming_python wrote:I didn't even notice he was gone. Whaddaya know, the country just kinda runs itself!

Anyway, to be serious for a moment, the Russian MoD are testing Putin response times. 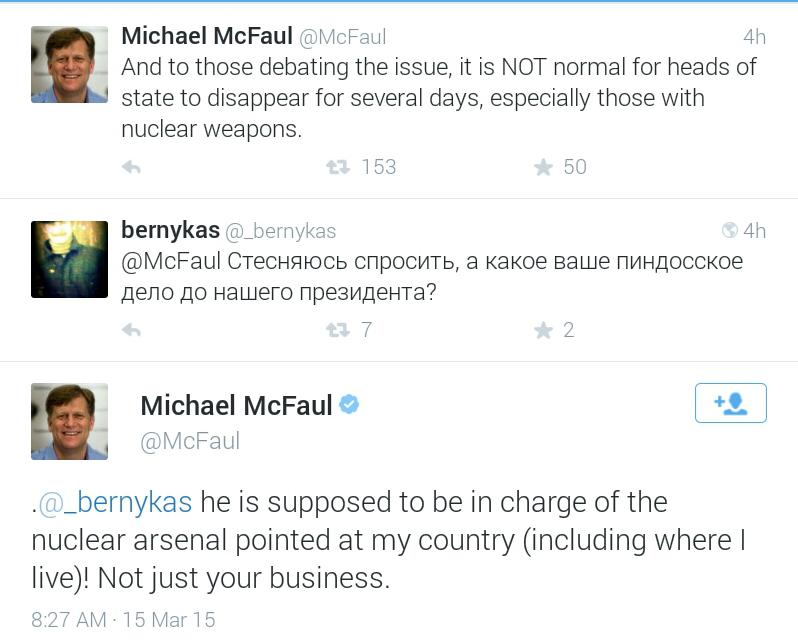 Well if those nukes are pointed at McFails house I hope Putin left a moron in charge... only trouble is that all the worlds morons seem to be in the republican party or congress...

After watching the video posted by Kyo in the other thread I am now suspicious of Putin's absence. There really was an
attempt to stage a Moscow Maidan, including the presence of dozens of Banderite goons following the CIA recipe book.

The snap military drills are a form of communication with the psychopaths in Washington that Russia will not roll over.
We don't know the half of the stuff that goes down. I wouldn't be surprised if there wasn't some assassin Putin hunt
after the failure of the Nemtsov murder Maidan. There are thousands of infiltrators from Ukraine in Russia who are
basically NATO agents of disruption. The possibilities for provocations are endless.

Vladimir Putin will hold a large conference on April 16 during which he will answer to questions from across Russia.
Cyberspec

Russian President Vladimir Putin shared his view on topics "starting from the Chechen campaign and ending with oligarch friends, attitude to power and attitude toward God" in new made-for-TV film, according to the statement of Russian journalist Vladimir Solovyov.

MOSCOW (Sputnik) — Russian President Vladimir Putin covered a wide range of issues, including the Chechen war and Russia's role in world affairs, during an almost two-hour interview to be used for a new made-for-TV film, Russian journalist Vladimir Solovyov, who hosted the interview, said Monday.

Solovyov said Putin shared his view on topics "starting from the Chechen campaign and ending with oligarch friends, attitude to power and attitude toward God."

The president also spoke about what it takes to be a leader on this scale, according to Solovyov.

"He said: 'as a matter of fact [you have to sacrifice] everything, there is no normal life at all, this is why I always honestly say that I do not like to work as president at all,'" Solovyov stated.

Putin's relations with Russian oligarchs also came up in the interview, parts of which will be used in the film, dedicated to the 15th anniversary of Putin's presidency, which will be broadcast on Sunday.

"Putin said that soon after he became president a group of oligarch mates came and said: 'Do you understand that you are not a president? We will rule the country,' and Putin said: "We shall see," Solovyov said.

Putin is currently serving his third four-year term as president of Russia after also holding the post in back-to-back terms from 2000 to 2008. He served as prime minister for four years before being elected president again in March 2012. Putin's current term expires in 2018.

Pretty insightful analysis by Rostislav Ishchenko, about the conflict between the US and Russia....

What does Putin want? A major analysis by Rostislav Ishchenko (must read!)
http://thesaker.is/what-does-putin-want-a-major-analysis-by-rostislav-ishchenko-must-read/
alexZam 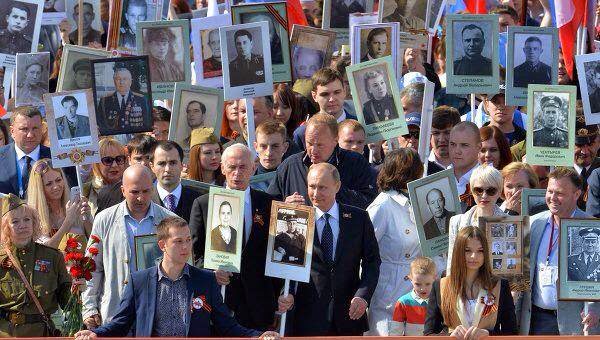 Russian President Vladimir Putin spoke about the 'Immortal Regiment' initiative's importance, while marching with over 300,000 people in Moscow's Red Square, Saturday. "It was born not in cabinets, nor in administrative structures, but in the hearts of our people," Putin told the interviewer.

Some estimate that around 500 000 people attended....possibly the biggest public gathering in Moscow ever! 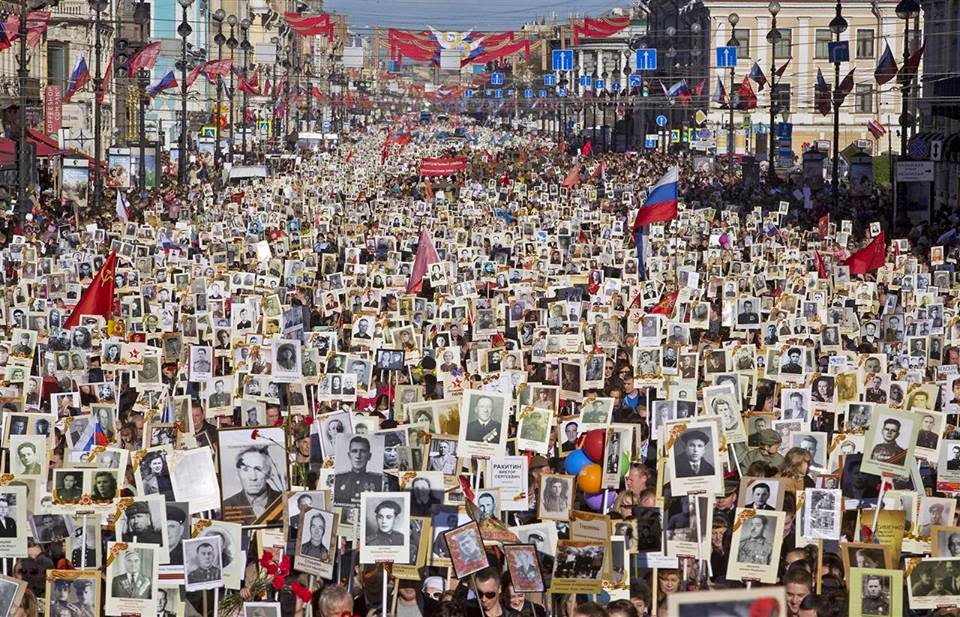 Got into this, dunno if it was posted before. It's old actually, but valid. Those were Dmitry Medvedev times as President and VVP as PM.