According to the Vietnamese resource baodatviet.vn, at the end of 2017, the LAO PSTV television channel of the Ministry of Defense of the Lao People's Democratic Republic (Lao People's Democratic Republic) demonstrated the modern 122-mm self-propelled CS/SH1 howitzer mounted on the 6x6 wheeled chassis. These systems are an export version of the SPH PCL09 manufactured by the China Corporation China North Industries Corporation (Norinco) for the People's Liberation Army of China (PLA) since 2010. Laos became the first known foreign customer for SPH CS/SH1. 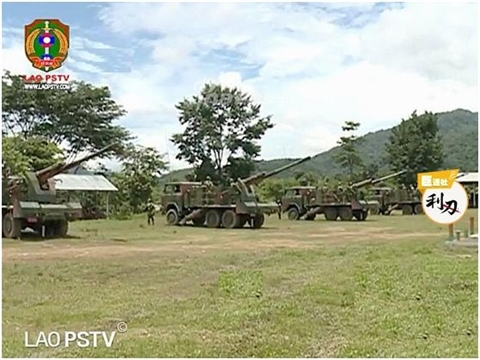 It is also reported that the Minister of Defense of Laos, Tiansamon Tiannalat, visited Russia in early April 2018, visiting, in particular, the JSC 61 Armored Repair Plant in Strelna (St. Petersburg). There, the Laotian Minister was shown a sample of the T-72B tank in a modernized version (known as the "White Eagle") previously delivered to Nicaragua. This visit to the plant in Strelna clearly indicated the interest of Laos to tanks in this version of modernization.

During the official meeting ceremony, the Lao People's Armed Forces Chief of General Staff laid a wreath at the Tomb of the Unknown Soldier near the Kremlin wall.

The Russian Defense Ministry noted that the Laotian delegation would visit the fourth Guards Tank Division of the Western Military District to acquaint themselves with the organization of combat training and day-to-day activities of the unit.

According to Alexey Khlopotov in his blog, the first photos of the upgraded T-72B1 tanks (product 184-1MS) acquired by Laos in the Russian Federation appeared on Twitter. Several dozens of combat vehicles were delivered to one of the ports of Vietnam, from where they will be delivered by auto trailers to the customer. 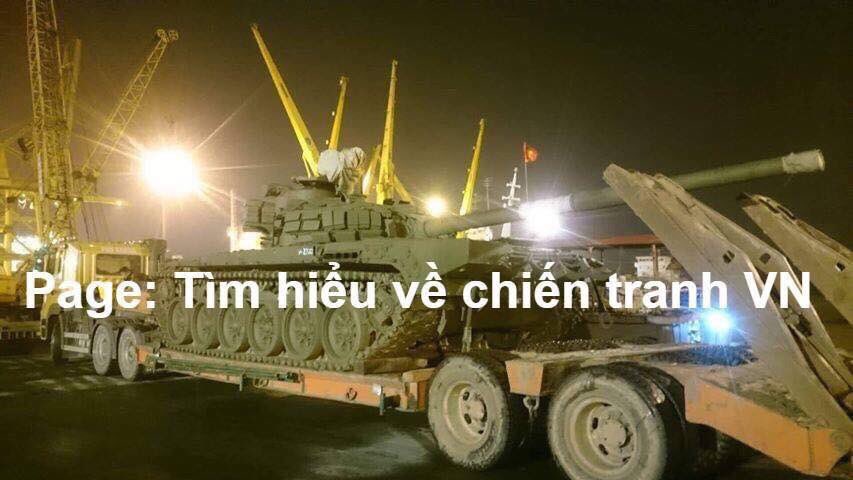 Modernization was carried out by 61 BTRZ near St. Petersburg. The fact that Laos bought dozens of such tanks became known on December 9th. Giving an interview to the program “Military Acceptance”, Laos Minister of Defense Tyansamon Tyannyalat answered the question about what weapons would be sent to Laos from Russia in the near future, replied: “There will be new T-72 tanks a few dozen units ...”

Talk about this for the first time came to the public plane in April of this year, during the visit of Tyansamon Tyannyalat to the JSC "61 Armored Repair Plant."

Let me remind you that “Product 184-1MS” was developed in the framework of the ROC “Proryv-2G” in early 2010 jointly with VNIITransmash, 29 KTTS of the Ministry of Defense of the Russian Federation and 61 BTRZ on request of Oboronservis. A prototype of the T-72B1 tank upgraded with this version was first demonstrated in June 2012 at the 2nd International Forum "Engineering Technologies 2012" held in Zhukovsky. The car received the nickname “White Eagle” for its unusual white color. In 2015, Rosoboronexport signed the first contract for this car. The buyer was the Armed Forces of Nicaragua. For them, 50 tanks of this modification were acquired.

Russian de-miners in Laos clear over 40 hectares of mines

De-miners use the MBI-P2 magnetometers, which help detect large metal items at a depth of up to six meters

The Russian mine clearance team is deployed to the Khamkeut District of the Bolikhamsai Province, where a branch of the International Anti-Mine Center was established earlier. Team members mostly deal with the cluster munitions the US Air Force used in 1969-1974, the newspaper wrote.

Russian de-miners use the MBI-P2 magnetometers, which help detect large metal items at a depth of up to six meters, as well as the improved OVR-2-02 protection kits, which contain audio response units and cooling systems, as well as special hearing protection devices that silence all sharp sounds and loud noises but allow users to hear commanders’ instructions.

The International Anti-Mine Center’s team of 36 de-miners has been carrying out a humanitarian demining operation in Laos since mid-October. Team members plan to clear over 100 hectares of mines until March 2019.

According to the Vietnamese web resource soha.vn, the Lao armed forces created their own version of the installation of a 122 mm Soviet towed howitzer on a self-propelled chassis, placing it on a Ural-4320 family truck with a 6x6 wheel formula. For firing, the installation is posted on three pillars (two on the sides and one at the rear). A sample of the self-propelled unit was demonstrated in 2018, serialization is unknown. 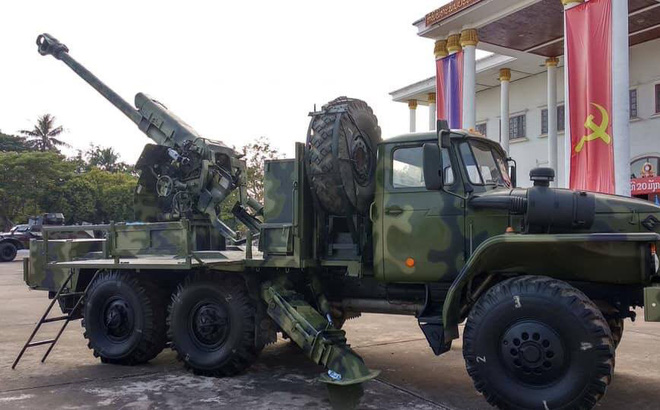 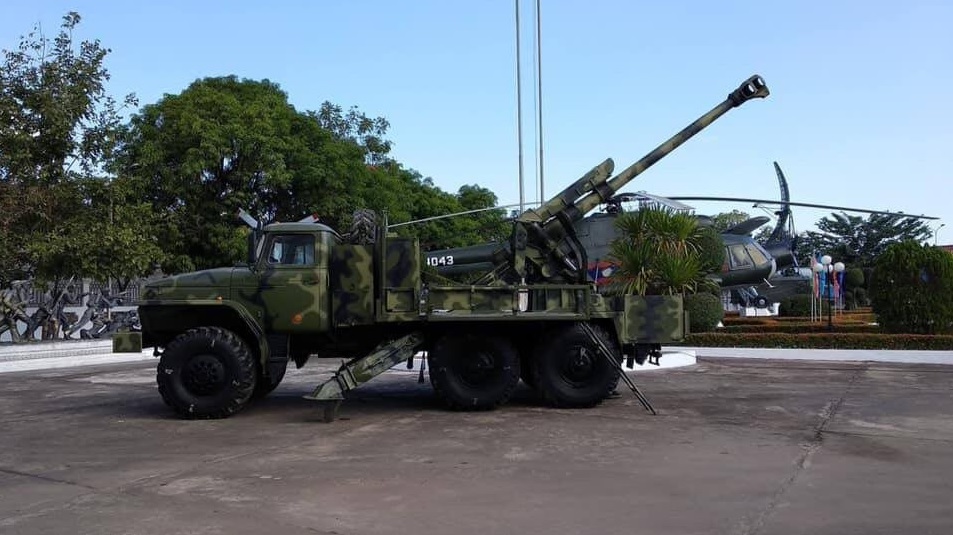 According to the Vietnamese web resource soha.vn, the Lao armed forces created their own version of the installation of a 122 mm Soviet towed howitzer on a self-propelled chassis, placing it on a Ural-4320 family truck with a 6x6 wheel formula. For firing, the installation is posted on three pillars (two on the sides and one at the rear). A sample of the self-propelled unit was demonstrated in 2018, serialization is unknown.

Those look like the Chinese ones they received from Norinco.

Lao web resources distributed a photo of three Russian-made Yak-130 combat training aircraft received by the People’s Army of Laos at the Vientiane airfield. Aircraft have Lao tail numbers "044", "045" and "046". 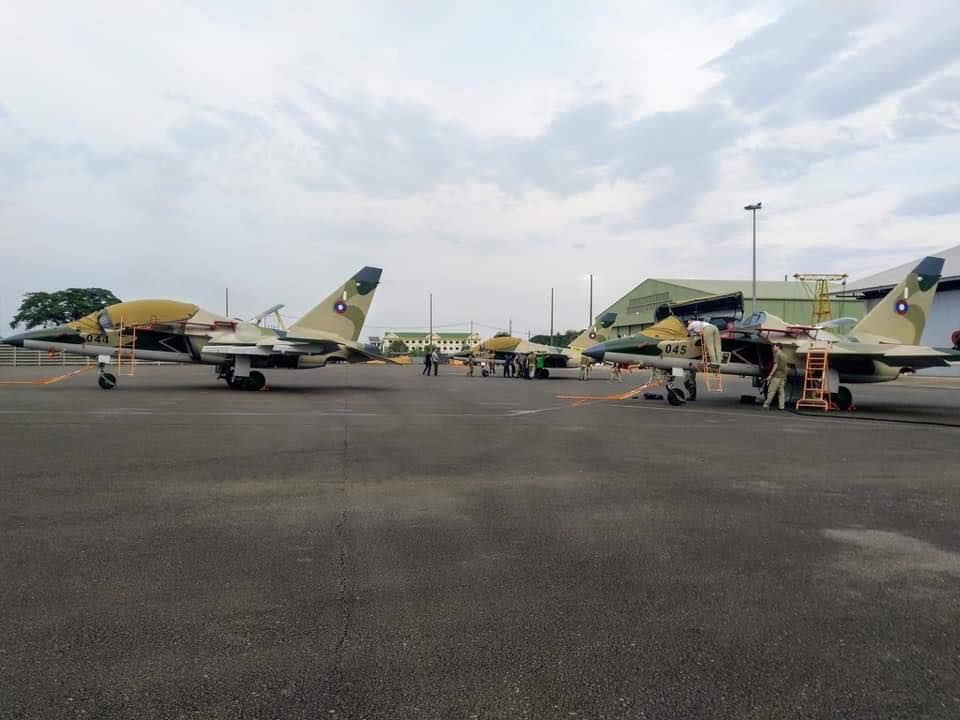 Recall that the first Yak-130 for Laos (tail number "044") was delivered to the capital of Laos, Vientiane on December 20, 2018 from Irkutsk on board the IL-76TD transport aircraft (registration number RA-78765) of the Russian airline Aviakon Citotrans.

The military attache of the Embassy of the Socialist Republic of Vietnam in Laos solemnly handed over to the representatives of the Ministry of Defense of this country a batch of automatic rifles Galil ACE.

The rifles were donated by Vietnam in honor of the 70th anniversary of the Lao armed forces. 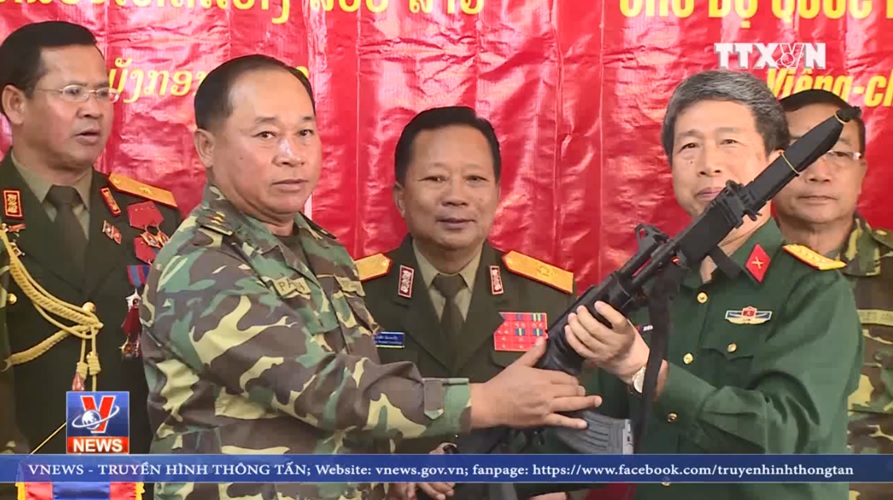 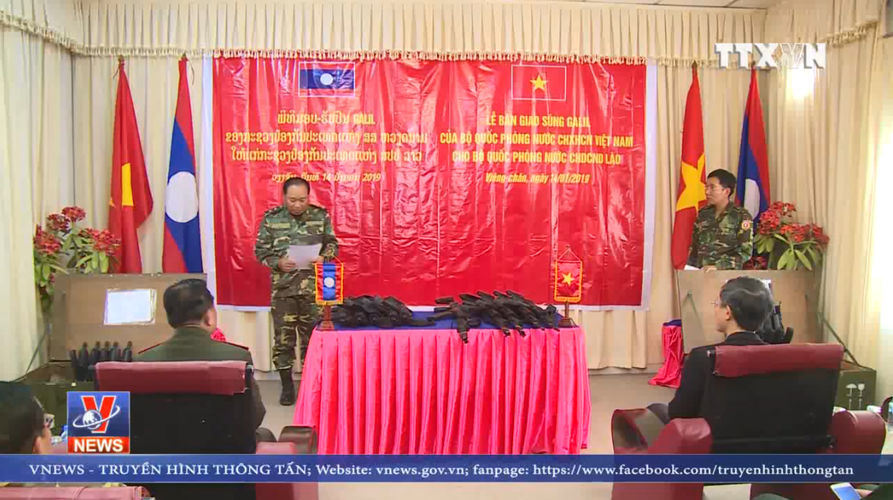 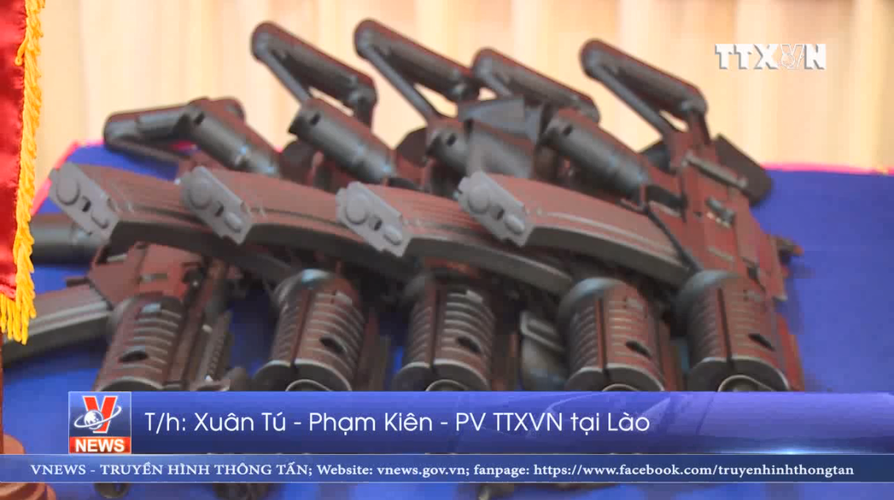 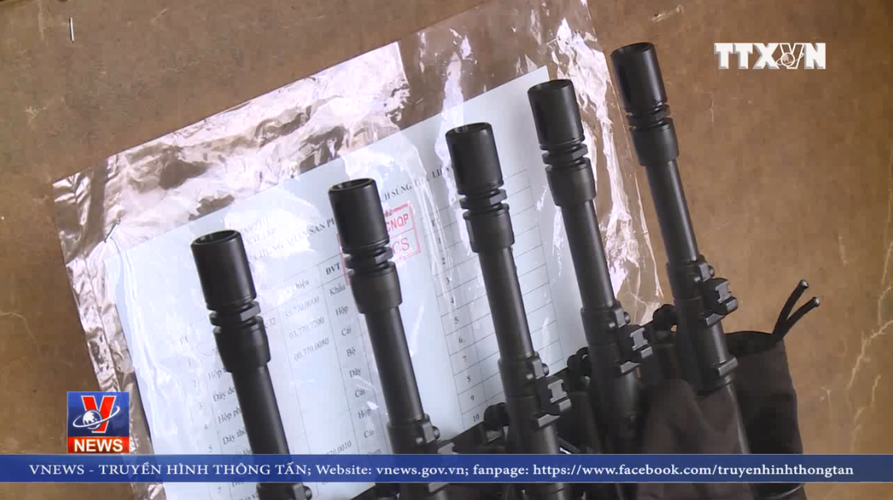 In 2014, a modern production line for the production of Israeli automatic rifles Galil ACE 31 (shortened model) and Galil ACE 32 under license from the Israeli private company Israel Weapon Industries (IWI) was launched at the Z111 arms factory of the Ministry of Defense of Vietnam in Thanh Hoa. Both samples are produced under the Soviet cartridge 7.62x39 mm and are designed to replace the Kalashnikov assault rifles of the same caliber in the Vietnamese People’s Army. 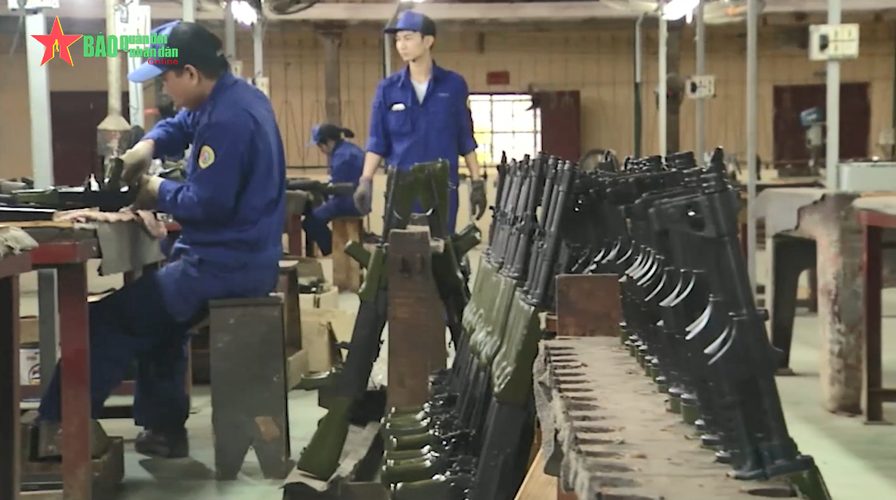 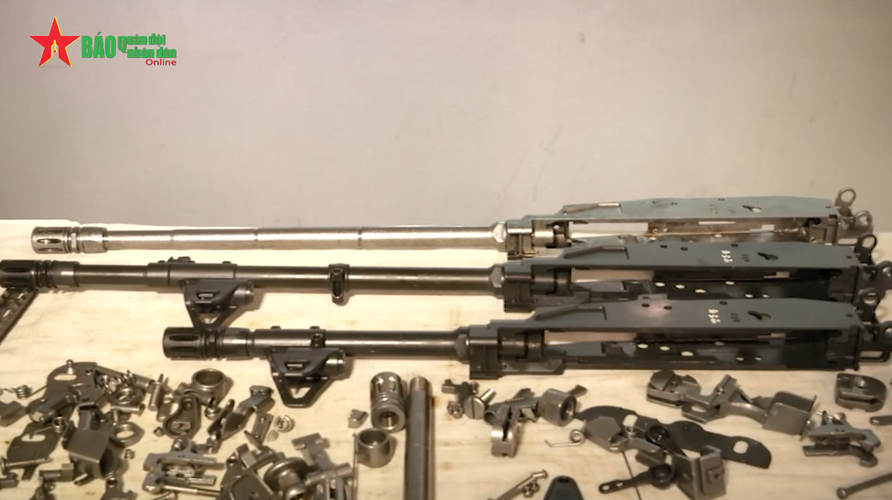 On January 20, 2019, a military parade was held in the capital of the Lao People’s Democratic Republic, Vientiane, in honor of the 70th anniversary of the founding of the People’s Army.

At the parade were first demonstrated new models of military equipment purchased in Russia and China. In particular, the upgraded T-72B1 tanks, the SR5 multiple launch rocket systems manufactured by NORINCO, a Chinese corporation (which were not previously reported to Laos), modern Chinese 122-mm CS / SH1 howitzers on a 6x6 wheelbase and Chinese 82-mm self-propelled mortars W99 (aka PCP001) on the chassis of Mengshi army terrain vehicle.

In the parade, the soldiers of the Laotian army observed Israeli automatic rifles Galil ACE. 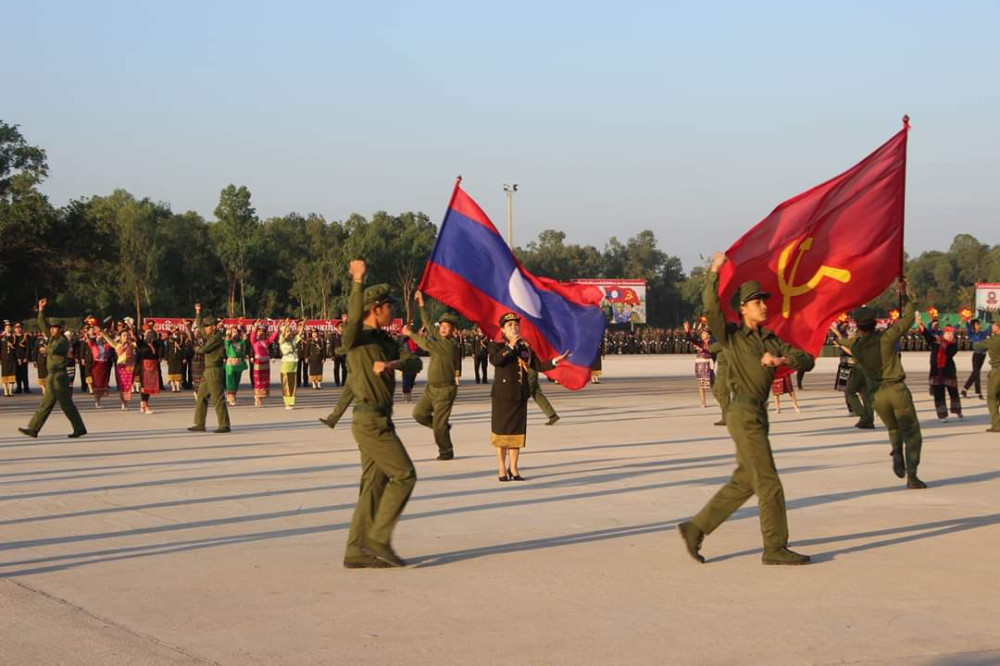 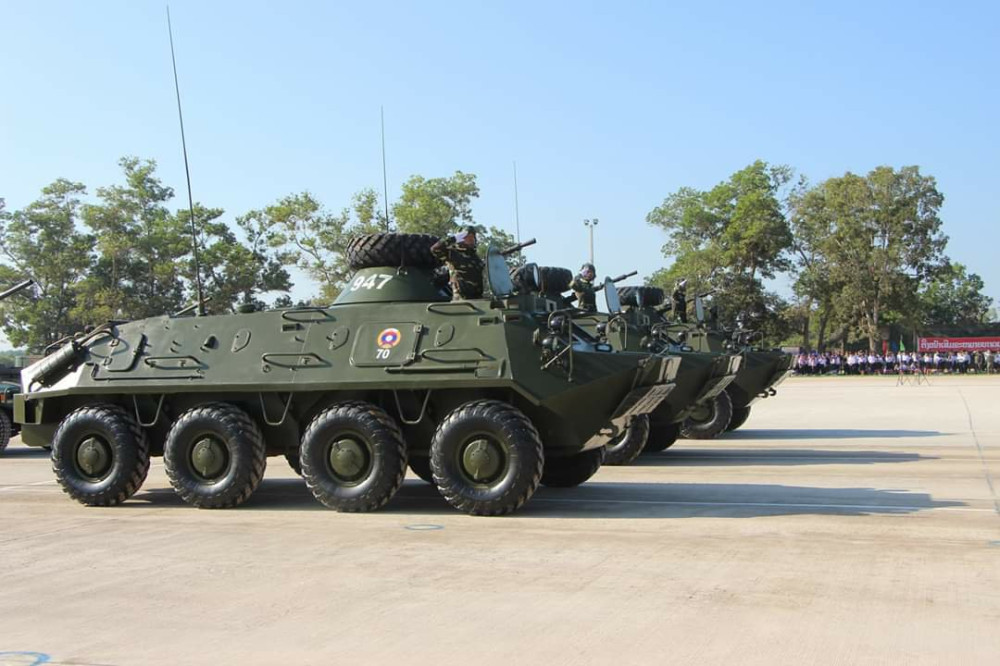 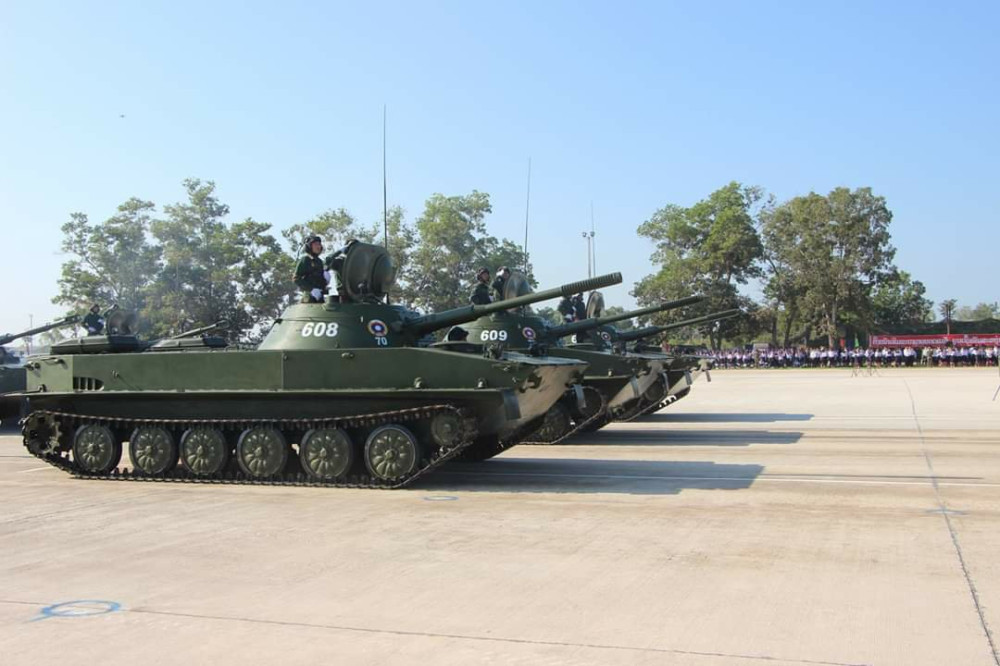 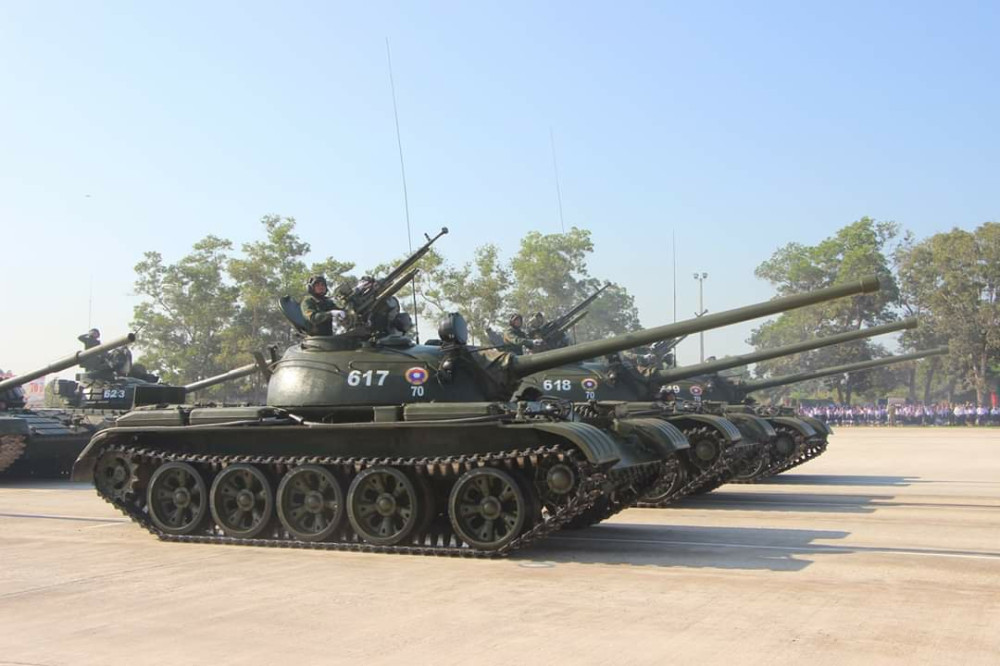 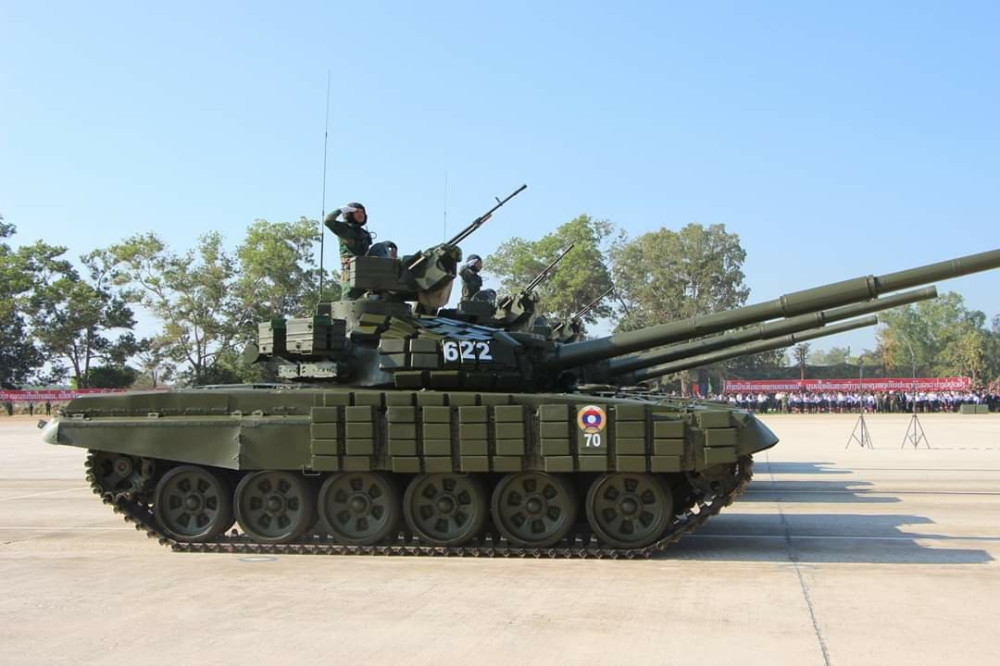 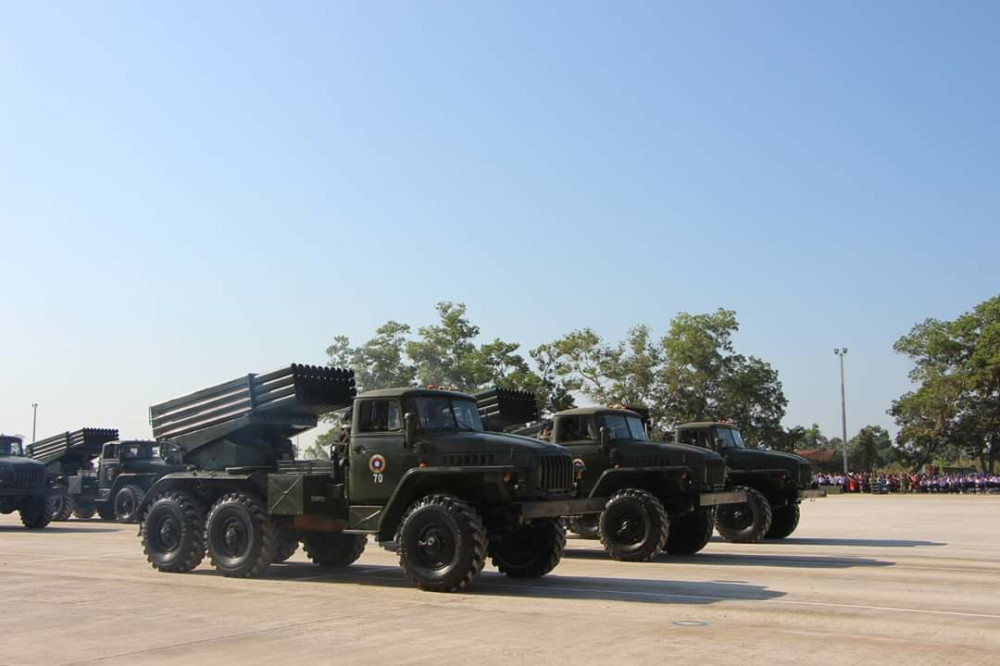 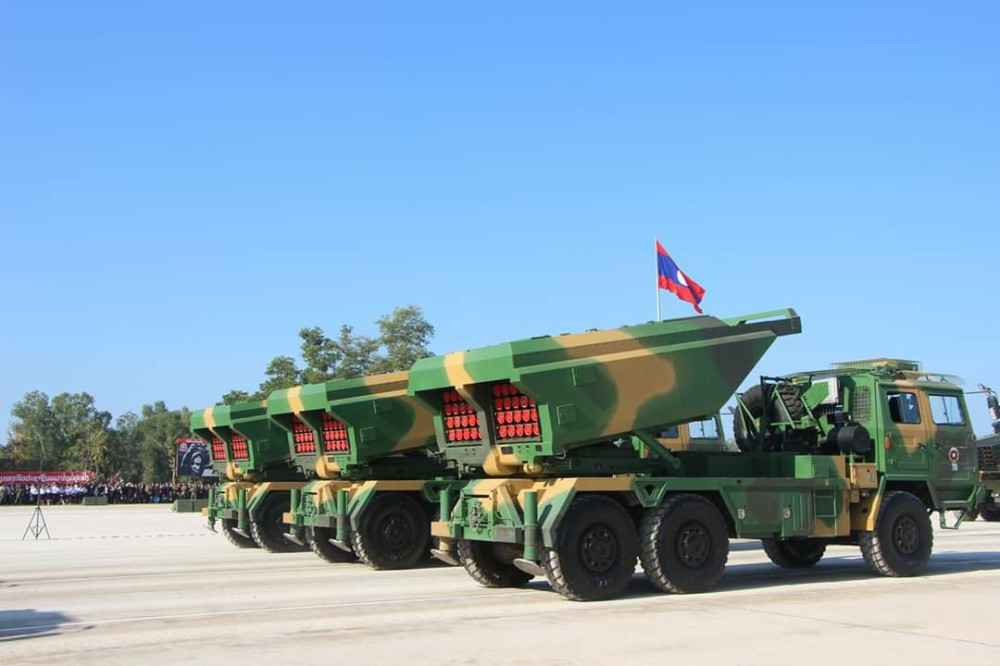 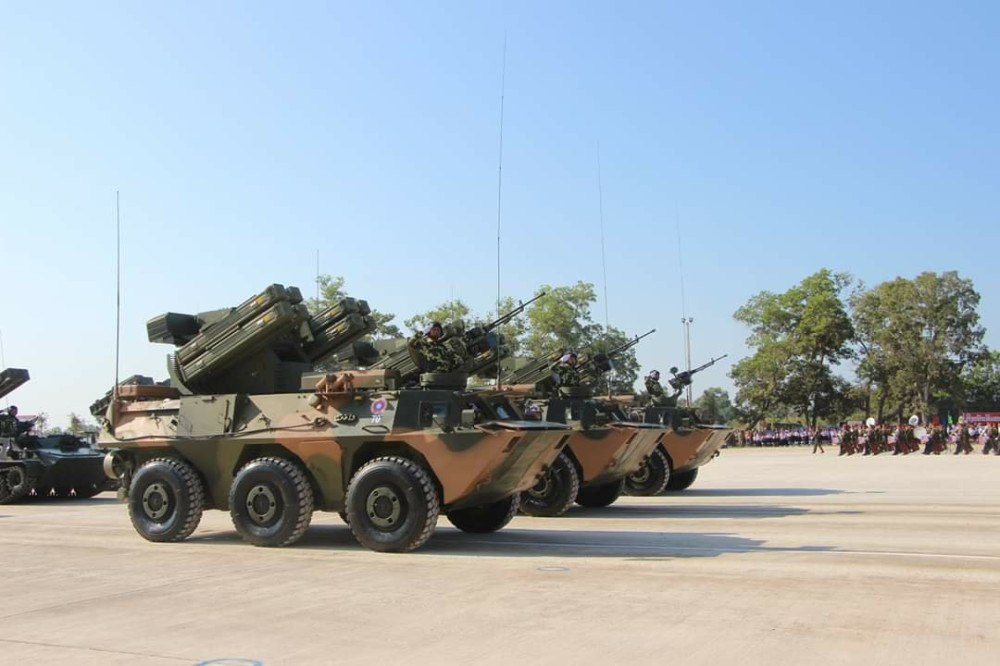 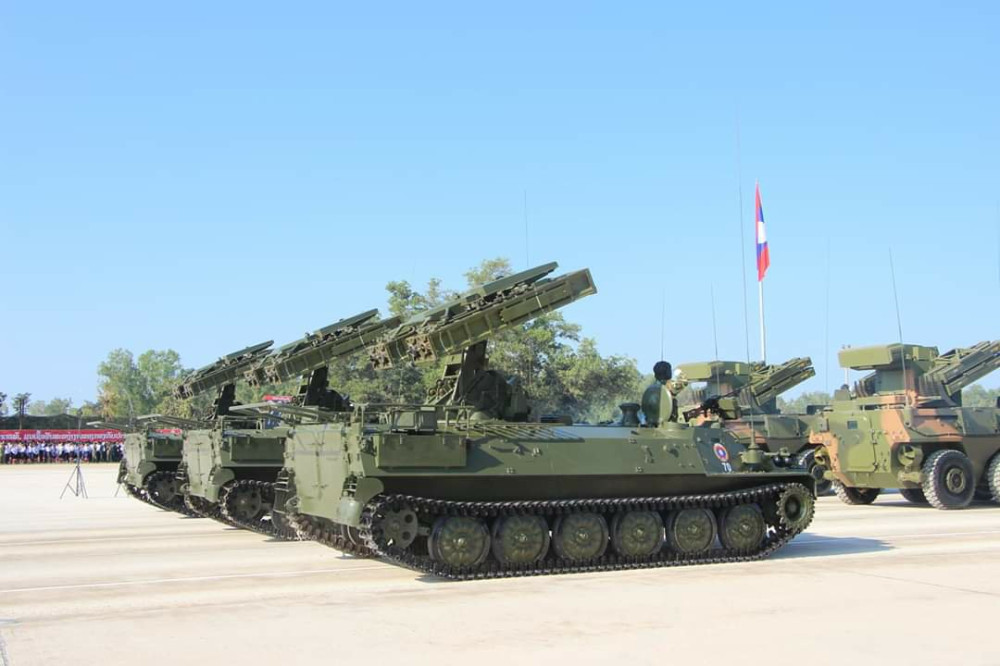 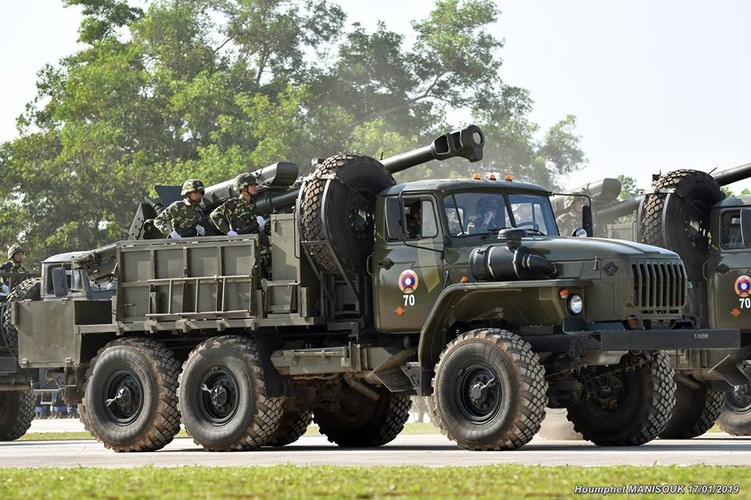 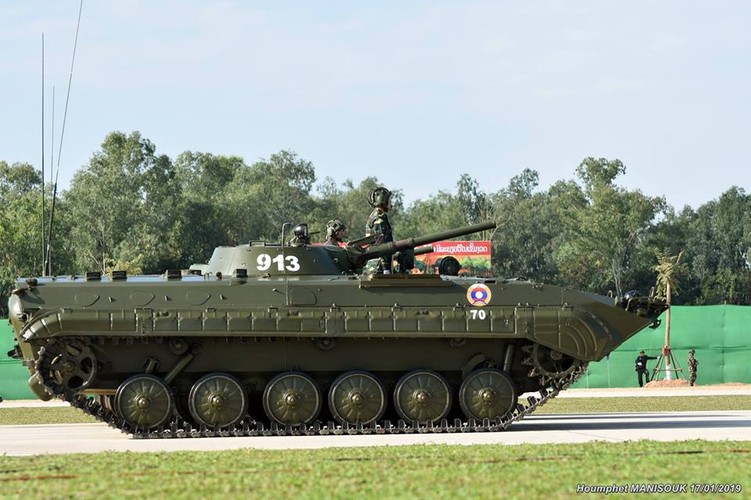 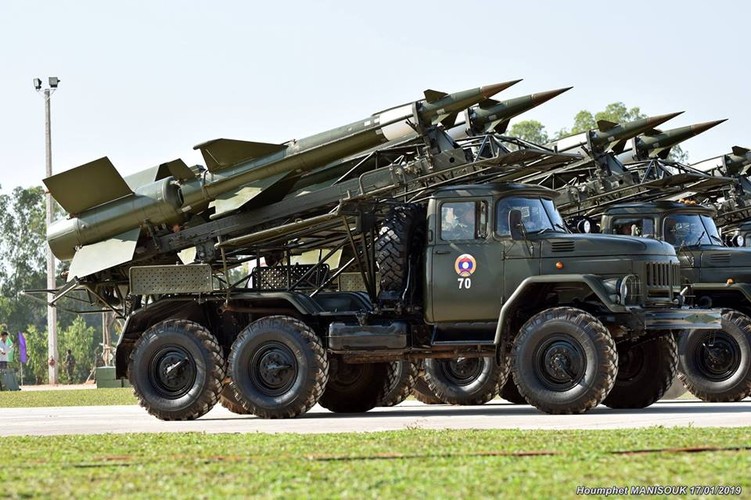 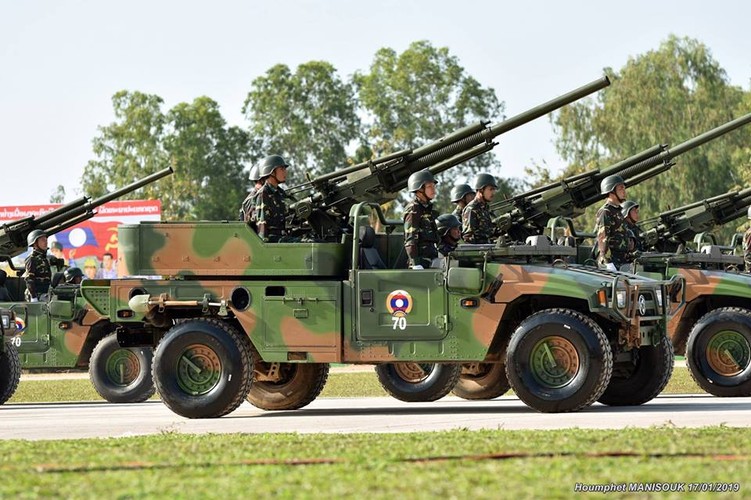 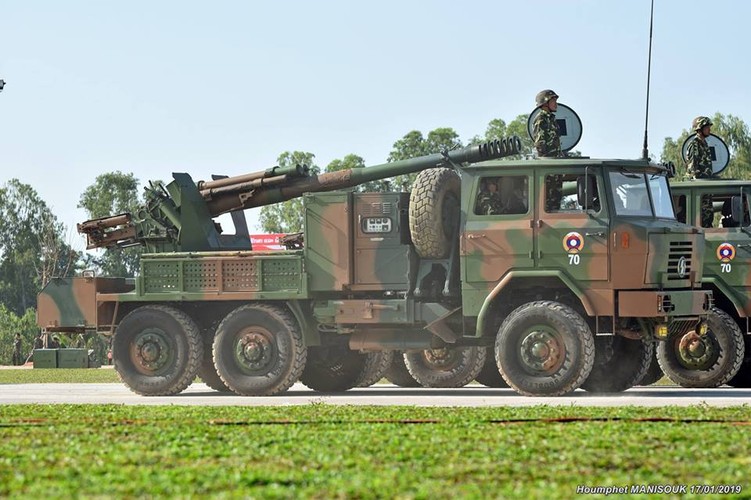 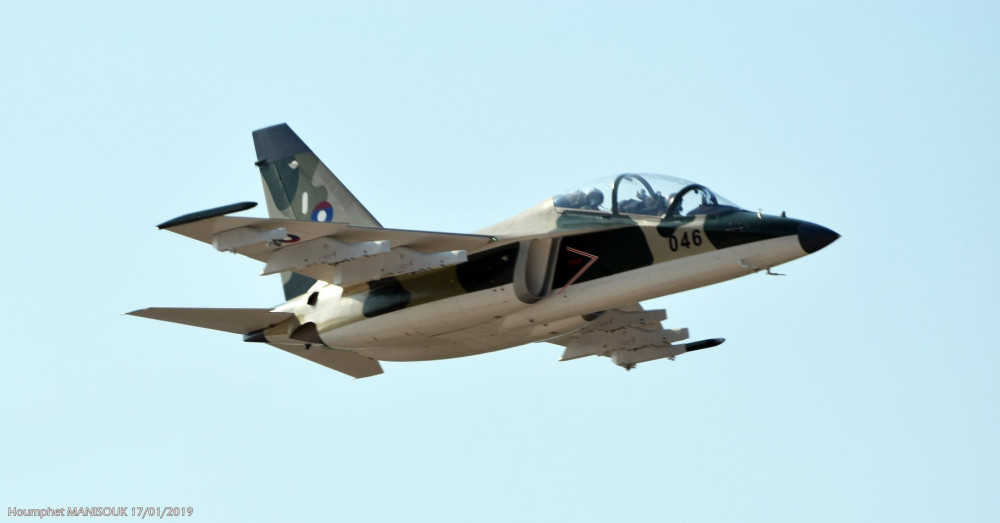 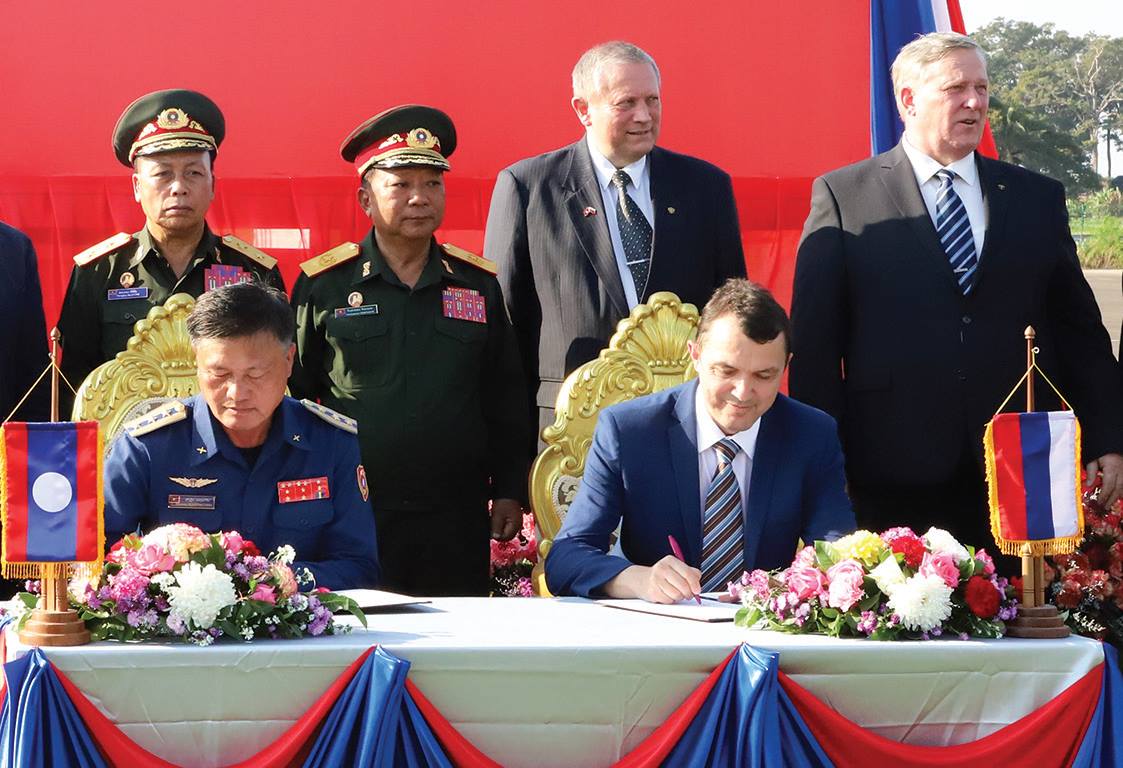 On January 22, 2019, an official ceremony was held at the airport of Vientiane, the capital of the Lao People’s Democratic Republic, to transfer four Yak-130 combat-training aircraft produced by Irkut PJSC.

As previously reported by bmpd colleagues “Within the framework of the contract signed in 2017, four Yak-130 combat training aircraft were delivered to Vientiane on a commercial basis. Aircraft paid in full, "- said the military department. They also noted that armored and lightly armored vehicles, as well as other Russian-made weapons, were simultaneously delivered to Laos. The contract was signed on August 26, 2017 by the head of the Russian government, Dmitry Medvedev, and the Prime Minister of Laos, Thonglun Sisulit, in Gorki, near Moscow. On January 10, 2019, Interfax, citing a source, announced the delivery of several Yak-130 to Laos. The FSMTC of Russia did not comment on this information then.

According to “Kommersant”, we are talking about the beginning of the implementation of a larger supply. According to the source of “Kommersant”, according to the above contract, ten such machines will be delivered to Laos. The estimated cost for all of the Yak-130 was about $ 300 million. Laos became the fifth foreign recipient of the Yak-130 aircraft produced by the Irkutsk Aviation Plant PJSC "Irkut Corporation", after Algeria (16 cars), Bangladesh (16 cars), Myanmar (six machines) and Belarus (eight cars).

Yak-130 is designed for training and combat training of pilots, as well as the use of air and ground targets. It allows you to train pilots for combat aircraft of the generations "4+" and "5". For the first time the car took to the air in 1996, and in 2002 was chosen as the main aircraft for the training of pilots of the Russian Air Force.

"Tank units of the Eastern Military District will take part in Russian-Laotian drills that will be held in Laos on December 10-19 at the Ban Pan training range," the press service said. "For the course of the drills, the Laotian army will provide Russian servicemen with their own weapons and military equipment, in particular T-72MS tanks, [armored vehicle] BRDM-2MS, PKTM machine guns, AKM assault rifle," the press service added.

Over 500 servicemen from Russia and Laos will take part in the joint drills. Russia will be represented by tank units from the Zabaikalsky region.