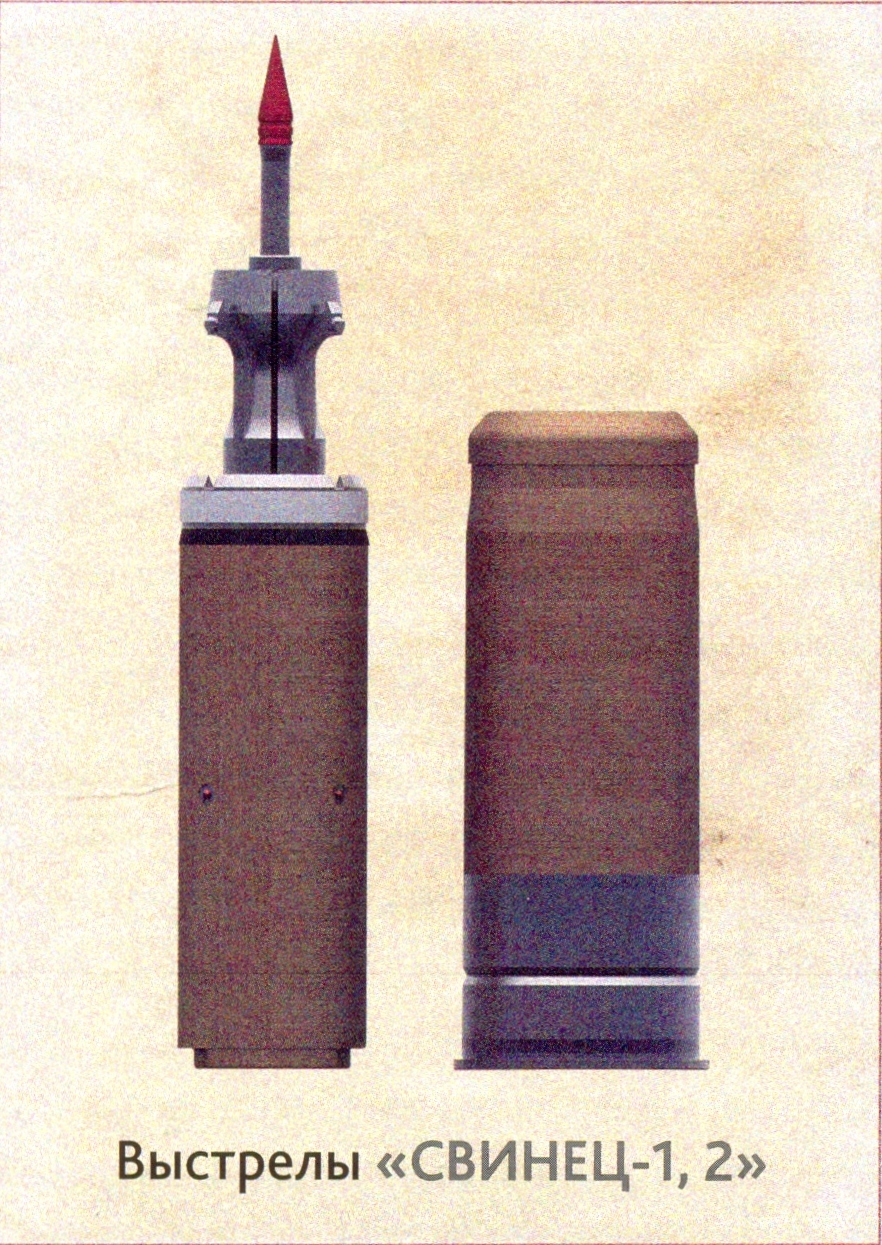 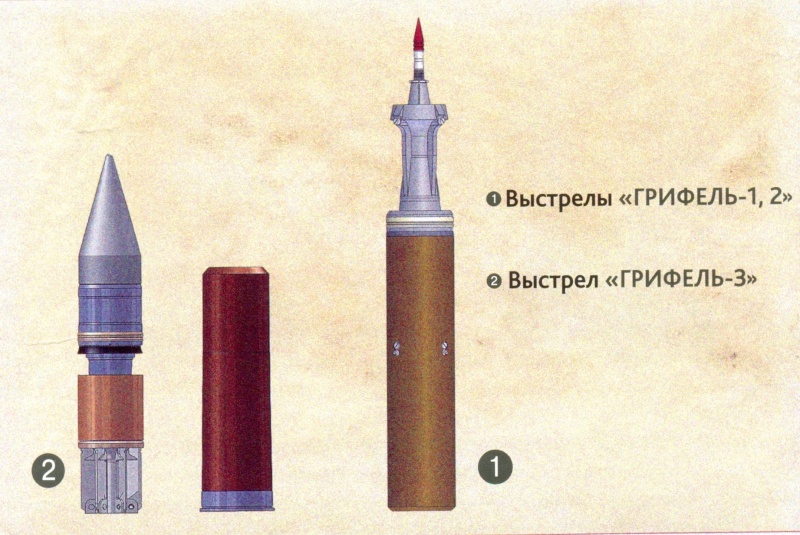 all pictures from Otvaga2004.
Viktor

900mm - that would be the make one hell of a penetration.

Any info about the round.
Austin

This is the reply i got at mp.net , if you read russian then the link would tell you better , share if you find any thing interesting

"Grifel" created for the object 195 or armata, and can load only in new autoloader, or turret autoloader like on "Burlak" turret 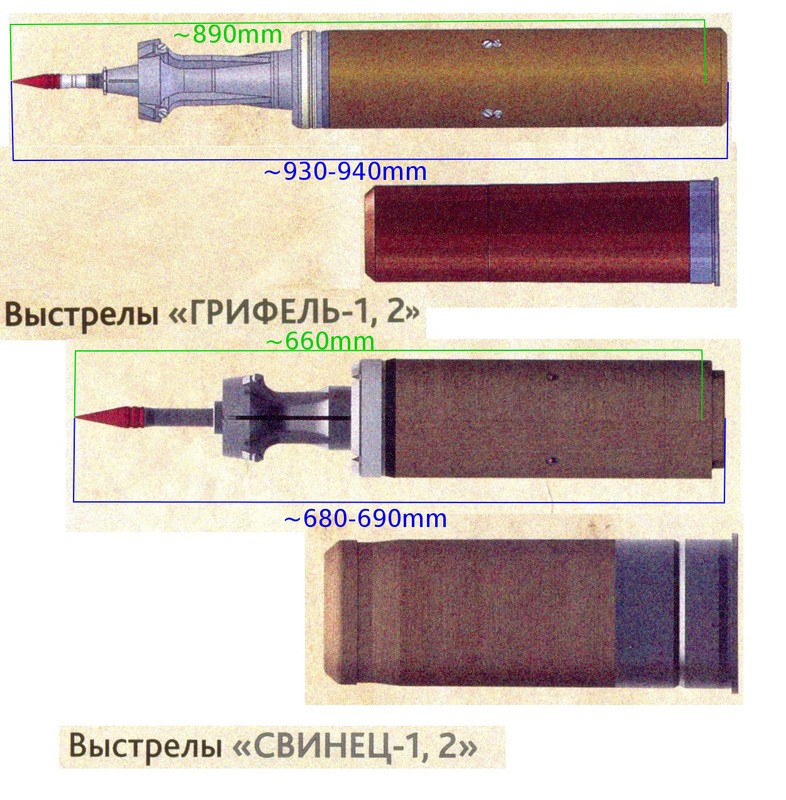 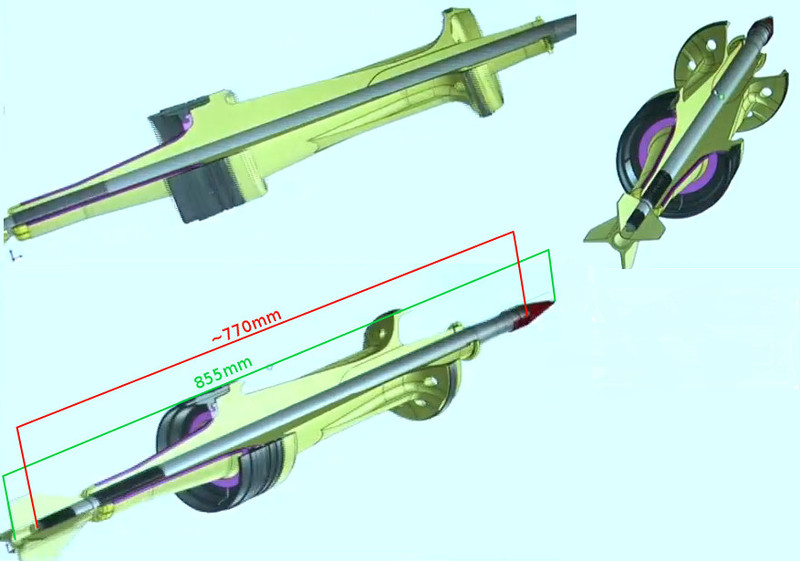 What has the export version got to do with this?

The T-90AM has a new modified autoloader, the T-90A had an older modified AL to allow longer ammo to be loaded, but newer even longer rounds have been developed since the T-90A entered service.

The new longer rod rounds have been developed since the T-90A and the new autoloader goes with the new gun in the T-90AM.
Austin

As per many Russian posters T-90A/M autoloader cannot hold rounds more than ~ 740 mm in length , thats the autoloader limitation and not related to export model.

They have developed 2A82 Gun to fire higher chamber pressure rounds.

Are those new longer APFSDS rounds developed for Armata?
Austin

Seems like its for Armata and for cancelled T-95
Austin

Some more pictures via Lidsky M.D 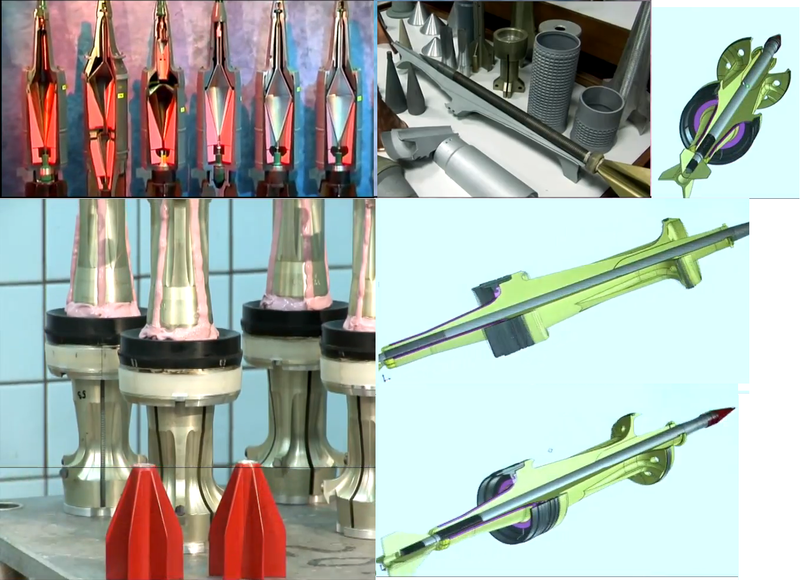 By the pictures I think these new rounds are one piece rounds as opposed to two piece rounds Russians used so far. Im I wrong?

neat round, from what ive read its penetrator length is similar to m829a3s while having greater energy values. wonder if its DU or WHA? however apart from the elongation and new propellant, nothing else seemsnext-gen to me. acquiring ultra-light composite sabots, a self-sharpening penetrator(WHA) tech , or even amorphous alloy penetrator, even more powerful propellants would be the next steps for future APFSDS rounds. alsoanyone else notice that the projectile is seated about halfway in the propellant part? there are "screws" where i think the projectile ends.
GarryB

Seems like its for Armata and for cancelled T-95

Just noticed, what is going on wit that HEAT round, 2nd from left in the top picture?

Usually the anti-ERA charge is at the very tip, this seems to have something more complicated going on.
Werewolf

It is actually quite common to have a double HEAT charge... Hellfire, for example has a double charge full calibre warhead to achieve the high penetration claims.

The order of detonation will be small precursor charge in front first to prematurely set off any ERA layer and blow it out of the way before the main charge acts. Next goes the rear most charge which blows a small hole through the charge in front of it, followed by the front charge. Against armour with no ERA the first precursor charge will start a small penetration, the rear charge will continue that and dig a significant hole into the target and the final charge will complete the penetration and spread hot material inside the tank interior.
TR1

Ah thanks, forgot that was that new round.
Werewolf

Ah thanks, forgot that was that new round.

Unfortunatley it is not in service. Would be nice to see it as soon as possible in service.
Always prefered HEAT over APFSDS.
GarryB

I rather suspect they will unify or combine a few of the ammo producers (ie chemical factories that make propellent and explosive) and then start orders for new ammo so they have some in stock when the new vehicles become available.

Looking at the situation with aircraft there were very few modern weapons actually in service... most simply were not bought because of their cost... no point buying expensive new weapons if you don't have any new or upgraded aircraft that can actually use them.

Now however, their numbers are reducing, so they have to make the change from dumb/simple/cheap, to smart/capable/not so cheap. An example is the new electronic fuse and guidance system they have for their 152mm shells and larger. It has a GLONASS receiver and control fins that allow it to guide an old obsolete 152mm shell to within 10m of a target in any weather, day or night. The new fuses cost around $1000 dollars each, but it means that you might only use 2-3 rounds instead of 40-50 so it actually saves money and makes the on board load of ammo a SPG carries much more effective... being able to engage 10-20 targets instead of 1 or 2.
Austin 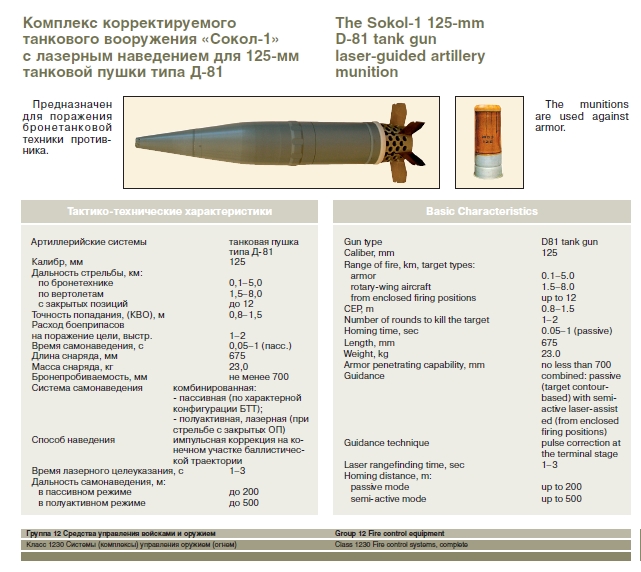 As indicated in the picture it is the Sokol-1 guided projectile. The variant shown has a multimode guidance consisting of a fourth generation (lock-after-launch capable) imaging guidance plus a laser semiactive guidance.
GarryB

The first I saw of that projectile was in Russias Arms 2004 where it is mentioned for the first time.

I think it uses an EO seeker similar to that used in the Ugroza guidance kits for unguided aerial rockets.

Very simply it can lock on to distinct targets like tanks or buildings, or indeed moving objects, but for a camouflaged log bunker you can point a laser and it will home onto that laser spot too.

Keep in mind that Russian and Soviet laser guided weapons are not the same as western systems... they still have to be aimed at the target but in the case of indirect fire munitions like artillery fired guided missiles like Gran, Kitilov, Krasnopol, etc.. ie semi active laser homing (as opposed to laser beam riding like Svir and Kornet) the laser only marks the target for the last three seconds of the trajectory. With direct fire rounds it is one second.

Very simply when a target is detected and its coordinates are calculated a flight time is also worked out and the launch platform is sent firing instructions from the target marker team and a clock counts down till impact minus 3 seconds for indirect fire and impact minus 1 second for direct fire ammo at which time the laser is automatically activated the target is marked and the projectile manouvers for a direct hit.

Basically Austin is hunkered down on the tree line with his laser target marker and radio and small laptop computer and looks for targets. Once found he will lase an object 50m away from the target to get its approximate position without giving away his location the laser will calculate the range precisely and using mils stadia on the aiming reticle Austin can calculate the change in angle and also in range to the actual target to get its precise location. (at different ranges the markings on his sight cover different distances so at x range 10 mils might be 10 metres... the laser will give the range to the spot lased and the stadia can be used to correct the location for the actual target).

Austin will then radio a nearby friendly artillery unit and call for a strike... a particular vehicle will be selected and its position and the position of the target will allow a precise shooting solution to be worked out (ie elevation and traverse) and flight time. Once the shot is ready Austin will transmit a fire signal and he will place his crosshair on the part of the target he wants hit with the trigger pulled. At 3 seconds to impact the laser will light up the target and the incoming round will detect the reflected laser signal and generally fire side thruster rocket motors to get as close as it can... as you can read CEP is 1-2m.

In this case however Sokol-1 is fired from a tank gun so it will have 1 second to manouver to hit the target.

This would be an excellent round for a towed 125mm gun in a self defence position... and would also be good for use against IFVs and ATGM carriers.

It wont make a T-80 a missile tank, but it is an effective new round for a variety of uses.
Austin

Thanks Garry but I wont do any of those

Check Page 17 , 3BM42 has been described in some detail

On Vasiliy Fofanovs page LINK, under section 125mm guided rounds there is "Sokol-1" new generation ATGM fired from the gun. It would be interesting if that same round could be fired