The French Foreign Legion (French: Légion étrangère) is a unique unit in the French Army, established in 1831. The legion was specifically created for foreign nationals wishing to serve in the French Armed Forces, but commanded by French officers. However, it is also open to French citizens, who amounted to 24% of the recruits as of 2007.
The Legion is today known as an elite military unit whose training focuses not only on traditional military skills but also on its strong esprit de corps. As its men come from different countries with different cultures, this is a widely accepted solution to strengthen them enough to work as a team. Consequently, training is often described as not only physically challenging, but also extremely psychologically stressful. A size of The French Foreign Legion is about 7,700 men in nine regiments and one sub-unit.
While most of the Legion's commissioned officers are French, approximately 10% of them are former Legionnaires who have risen through the ranks. Though open to people of any nationality, most Legionnaires still come from European countries. Membership of the Legion is a useful guide to political history: specific national representations generally surge whenever a country has a political crisis, and tend to subside once the crisis is over and the flow of recruits dries up. After the First World War, many (Tsarist) Russians joined.
Immediately before the Second World War, Czechs, Poles and Jews from Eastern Europe fled to France and ended up enlisting in the Legion. After World War Two, the German presence was particularly strong. Following the break-up of Yugoslavia, there were many Serbian nationals. Also in the 1990s, the collapse of the Soviet Union, and the changes in the former Warsaw Pact countries, led to an increase in recruitment from Poland and from the former republics of the USSR. Recent years have seen an increasing number of recruits from African and Balkan countries.

However, in addition to the fluctuating numbers of political refugees, asylum seekers and economic migrants from a wide variety of nations, there has been, since the end of World War Two, a strong core from two nations in particular, Germany and Britain. The Legion appears to have become as much a part of these two nations' culture as a French institution, and a certain stability in recruitment levels has developed; it does not follow the general 'yo-yo' trend so closely.

After the fall of the Third Reich, Germans, long a major presence in the legion, are believed to have accounted for roughly sixty percent of its manpower. After the war, the French administered two zones of Western Germany adjacent to France. In these zones, recruitment offices enabled many former German POWs to join the legion almost immediately after their release from prison camps. However, Bernard B. Fall, a leading expert on French Indochina and the author of the famous accounts Street without Joy and Hell in a Very Small Place, disputes this figure and claims that Germans made up thirty-five percent of the Legion at most in the post-WWII period. Nevertheless, the image of a German-dominated postwar Foreign Legion is the setting for the well-known novel Devil's Guard, which narrates a former Waffen-SS member's brutal experience of joining the Legion and fighting alongside other former SS against the Viet Minh in Indochina.

During the late 1980s, the Legion saw a large intake of trained soldiers from the UK. These men had left the British Army following its restructuring and the Legion's parachute unit was a popular destination. At one point, the famous 2eme REP had such a large number of British citizens amongst the ranks that it was a standing joke that the unit was really called '2eme PARA', a reference to the 2nd Battalion, the Parachute Regiment of the British Army.

While no serious studies have been made of the motives for enlistment over the years, the majority in the Legion's ranks were either those transient souls in need of escape and a regular wage, or refugees from countries undergoing crises. In recent years, however, the improved conditions and professionalism of the Legion have in turn attracted a new kind of 'vocational' recruit, from middle-class backgrounds in stable and prosperous countries, such as the US, Britain and France itself.

In the past, the Legion had a reputation for attracting criminals on the run and would-be mercenaries, but in recent years the admissions have been severely restricted and background checks are performed on all applicants. Generally speaking, convicted felons are prohibited from joining the service. Legionnaires can choose to enlist under a pseudonym ("declared identity"). This disposition exists in order to allow people who want to start their lives over to enlist. French citizens can enlist under a declared, fictitious, foreign citizenship (generally, a francophone one, often that of Canada or Monaco). After one year's service, Legionnaires can regularise their situation under their true identity. After serving in the Legion for three years, a legionnaire may apply for French citizenship. He must be serving under his real name, must no longer have problems with the authorities, and must have served with “honour and fidelity” for at least three years. French nationality cannot be granted under a declared identity. Furthermore, a soldier who becomes injured during a battle for France can apply for French citizenship under a provision known as “Français par le sang versé” ("French by spilled blood").
This is site of Legion: http://www.legion-recrute.com/en/
There you can see that France recruits many people from another countries of the world. Legionnaires will serve in Afghanistan, French Guiana, some countries of Africa: Djibouti, Mayotte, etc.

If I ever got in trouble with the law, I would join the FLE.
milky_candy_sugar

Actually that's what my french cousin did. - Most of the french people in FLE are bounty hunters, robbers, but sane. For the foreign people, its another thing, But sane criminals are still accepted
milky_candy_sugar

The national composition of the French Foreign Legion

Interesting infographics from the official page of the French Foreign Legion in the social network twitter.
It is reported that at this time [as of January 16, 2017] the strength of the legion is 8,624 servicemen from159 nationalities. In the percentage of representatives of Central Europe and the Balkans - 21.5%, French - 11.4%, Slavs (judging by the map, Russians, Kazakhstanis, Uzbeks, representatives of Kyrgyzstan, Turkmenistan and Tajikistan) - 22.1%, Arabs - 3,3%, Africans (Central, Western and Eastern Africa) - 11.4%, Asians - 11.5%, North America, Western Europe, South Africa, Australia and Oceania - 9.3%, Hispanics - 9.5% 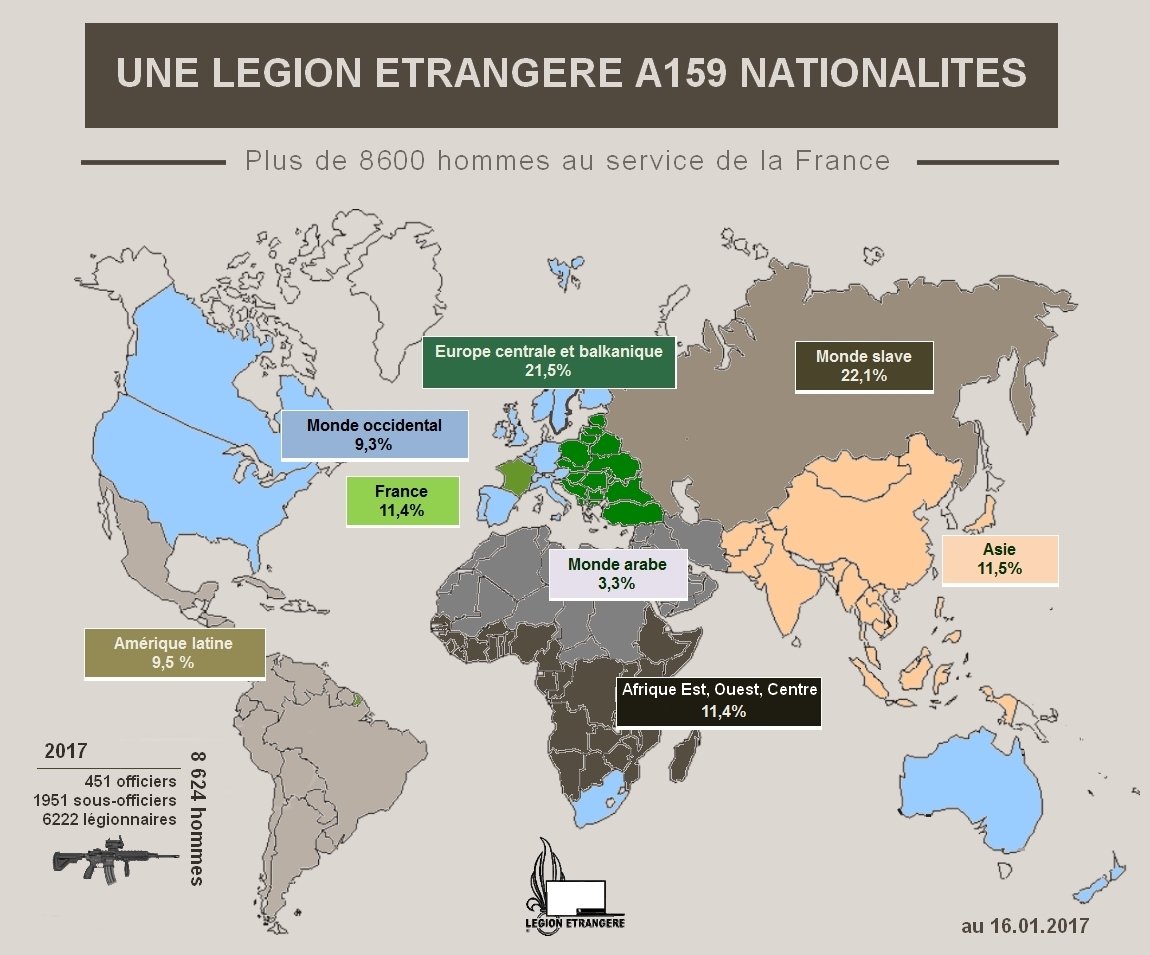