Australia will embark on a decade-long surge in weaponry and military forces to defend its land, sea, skies and space from Asia's rapidly growing military forces.


Key points:
•Australia ratchets up military spending in response to rising tensions in Asia
•Spending up by nearly $30 billion
•Climate change and terrorism also listed as threats
•Defence spending will rise even if GDP falls


The 2016 Defence White Paper maps a course towards a total of $195 billion in defence capability or equipment by 2020-21, together with a larger military force of 62,400 personnel, the largest in a quarter of a century.

When Defence planners get it wrong

The Defence White Paper comes with a big sales pitch, but past editions have often missed the mark, writes Greg Jennett.
Joining an Asian-region mini arms race, the White Paper promises 12 submarines to be built at a cost of more than $50 billion between 2018-2057.

However, maintenance costs will push that $50 billion budget much higher.

Navy will scoop a quarter of all new spending on capability, with nine new anti-submarine warfare frigates and 12 offshore patrol vessels.

The RAAF will build up two fleets of drones while also bringing its eventual fleet of 75 Joint Strike Fighters online.

The Army will claim 18 per cent of all extra spending on equipment, buying armed drones, new protected vehicles to transport troops, helicopters for special forces and a long-range rocket system.

Underscoring a sense of urgency to the renewal of Australia's defence power, the Government is aiming to build spending up to 2 per cent of GDP by 2020/21 — earlier than previously promised — representing an overall increase of $29.9 billion.

Prime Minister Malcolm Turnbull said the Government was committed to the "significant increase in spending" due to regional challenges as well as the threat from climate change and terrorism, among other issues.

The factoring in of climate change was not planned under the Abbott Government.

"In the next two decades, half the world's submarines and at least half the world's advanced combat aircraft will be operating in the Indo-Pacific region, in our region, and this complicates the outlook for our security and strategic planning," Mr Turnbull said.

"We would be concerned if the competition for influence and the growth in military capability were to lead to instability and threaten Australia's interests, whether in the South China Sea, the Korean peninsula or further afield.We have a strong, vital, vested interest in the maintenance of peace, stability and respect for the rule of law."

The language of the White Paper points to a realisation that Australia needs to increase the "potency and agility" of its forces in the face of rising wealth and power in Asia, coupled with the strategic tension already arising between China and the United States.

"Territorial disputes … have created uncertainty and tension in our region," the White Paper notes.
Ahead of the release of the Defence White Paper, Malcolm Turnbull said "under Labor, defence spending as a share of GDP dropped to its lowest level since 1938". Fact Check investigates.

"Some matters that previous defence white papers have described as long-term issues, such as the impact of modernisation in our region, now fall to this White Paper to respond to."

Australia continues to throw its military lot in with the United States, assessed to "remain the pre-eminent global power over the next two decades".

The White Paper aims to deepen Australia's alliance with America, including the relocation of a US spy telescope known as an "optical space surveillance telescope" to Exmouth in Western Australia.

On the path to building defence funding up to 2 per cent of GDP, the Government will also "de-couple" its spending on the military from the general health of the economy, so that even if growth slows, defence will still get its 2 per cent share.

US Ambassador to Australia John Berry described the White Paper as a "well-considered, comprehensive approach to addressing evolving security challenges of the coming decades".

"As allies, we welcome the Government's sustained investment in defence capabilities and readiness and its support for rules-based international order," he said.

Boxer CRV won the tender of the Australian Army

On March 14, 2018, the government of Australia officially announced the selection of the armored Boxer CRV presented by the German group Rheinmetall in the tender for the LAND 400 Phase 2 program (Mounted Combat Reconnaissance Capability) for the purchase of 221 military reconnaissance vehicles with the wheel formula 8x8 for the Australian army. The statement was made personally by the Prime Minister of Australia, Malcolm Turnbull. Competitor Boxer CRV in the tender was an armored car AMV35, presented jointly by BAE Systems Australia and the Finnish group Patria. 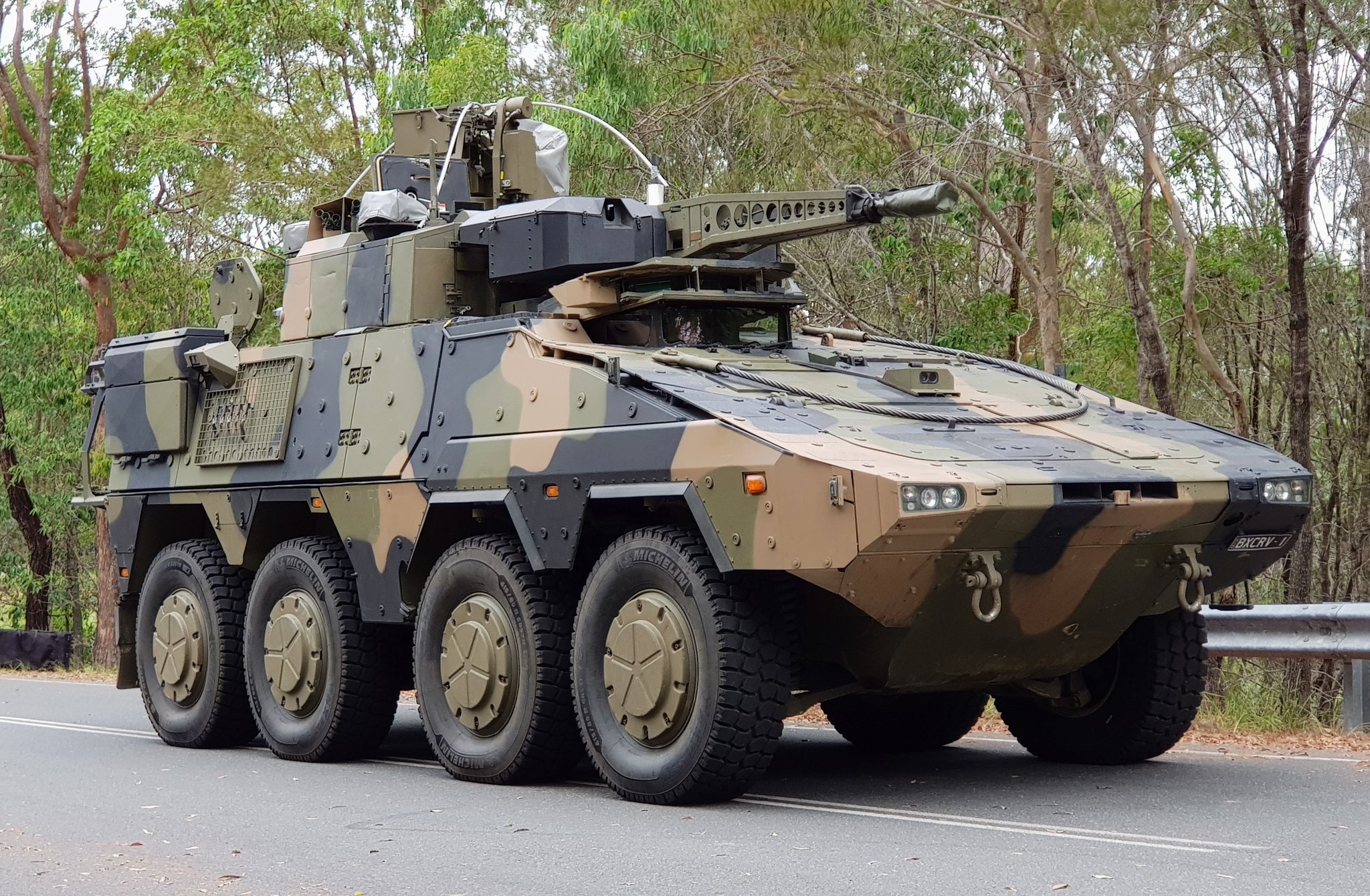 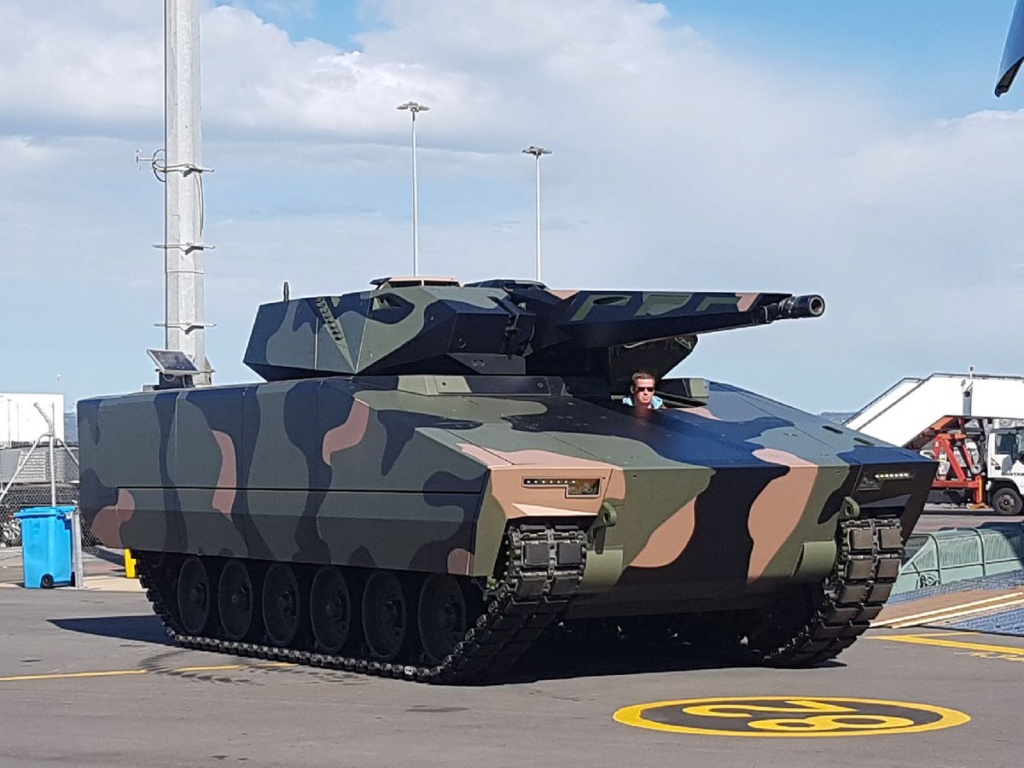 Thus, two other bidders - BMP General Dynamics Ajax and BAE Systems Hagglunds CV90 - dropped out of the Australian tender. The German BMP Puma jointly developed by Rheinmetall and KMW was not put up for tender due to the requirement of the Australian Ministry of Defense for applicants to have a manned tower.

BMP KF41 Lynx is a new proprietary Rheinmetall development. In turn, the AS21 Redback presented by Hanwha is a modified version of the serial South Korean BMP K21.

Now both selected bidders are given 12 months to manufacture several prototypes of the selected KF41 and AS21 machines for an extensive Australian test program for final sample selection as part of Phase 3 of the LAND 400 Phase 3. This test phase should be completed by the end of 2021, after which the results will be presented to the Australian government, which will make the final type selection in 2022 during the so-called 3rd stage of the evaluation program.

The LAND 400 Phase 3 program provides for the purchase of 450 caterpillar infantry fighting vehicles for the Australian army totaling up to Australian $ 15 billion (up to US $ 10.3 billion), with the goal of replacing the old American M113AS4 armored personnel carriers as the main infantry battalion. .

On September 24, 2019, the German group Rheinmetall handed over to the Australian army the first armored vehicle GTK Boxer CRV with an 8x8 wheel formula under the 2018 contract under the LAND 400 Phase 2 program (Mounted Combat Reconnaissance Capability). The transferred machine is made in the "multi-purpose" MPV configuration (in fact, an armored personnel carrier) and is the first of 25 units of the Block I series manufactured by Rheinmetall directly in Germany.

Recall that on August 17, 2018, the Australian government signed a contract worth 2.1 billion euros (3.3 billion Australian dollars) with the Rheinmetall group to supply the Australian army with 211 Boxer CRV combat vehicles (Combat Reconnaissance Vehicle) with an 8x8 wheel formula. Earlier in March 2018, the Boxer CRV armored vehicle presented by Rheinmetall was declared the winner of the Australian Army's LAND 400 Phase 2 (Mounted Combat Reconnaissance Сapability) tender for the acquisition of wheeled combat reconnaissance vehicles to replace the 257 ASLAV wheeled armored vehicles used for this purpose in intelligence option.

Acquired by Australia, the Boxer CRV, a modification of the famous German Artec Boxer armored personnel carrier, has a total combat weight of 38.5 tons, making it apparently the heaviest modern wheeled armored vehicle in the world. Boxer CRV has a capacity of seven people (including four paratroopers) and the linear version of the CRV is equipped with a two-seater Rheinmetall LANCE turret with a 30-mm automatic gun Mauser / Rheinmetall MK30-2 / ABM with programmed shots and ATGM Rafael Spike-LR2. In the future, machines should be equipped with an active protection complex (a choice should be made between the Rheinmetall Active Defense System and Rafael Trophy complexes). Of the 211 vehicles contracted by Australia, the LANCE turret with a 30 mm cannon will receive 133 linear CRV machines. Machines of all other options should be equipped with remotely controlled combat modules with a 12.7 mm machine gun.

The first 25 Boxer CRVs of the Block I series (13 multi-purpose MPVs and 12 linear reconnaissance CRVs) should be manufactured by Rheinmetall and delivered from Germany by the end of 2019. The remaining 186 vehicles of the Block II series will be assembled from 2021 to 2026 at the military vehicle center of excellence (MILVEHCOE) in Australia, which will be created in Brisbane (Queensland), which will also act as a center for the integration, maintenance and repair of these machines. The Block II series should include 121 CRV line reconnaissance vehicles, 29 forward guidance vehicles, 15 command and staff vehicles, 11 repair vehicles and ten armored recovery and recovery vehicles. 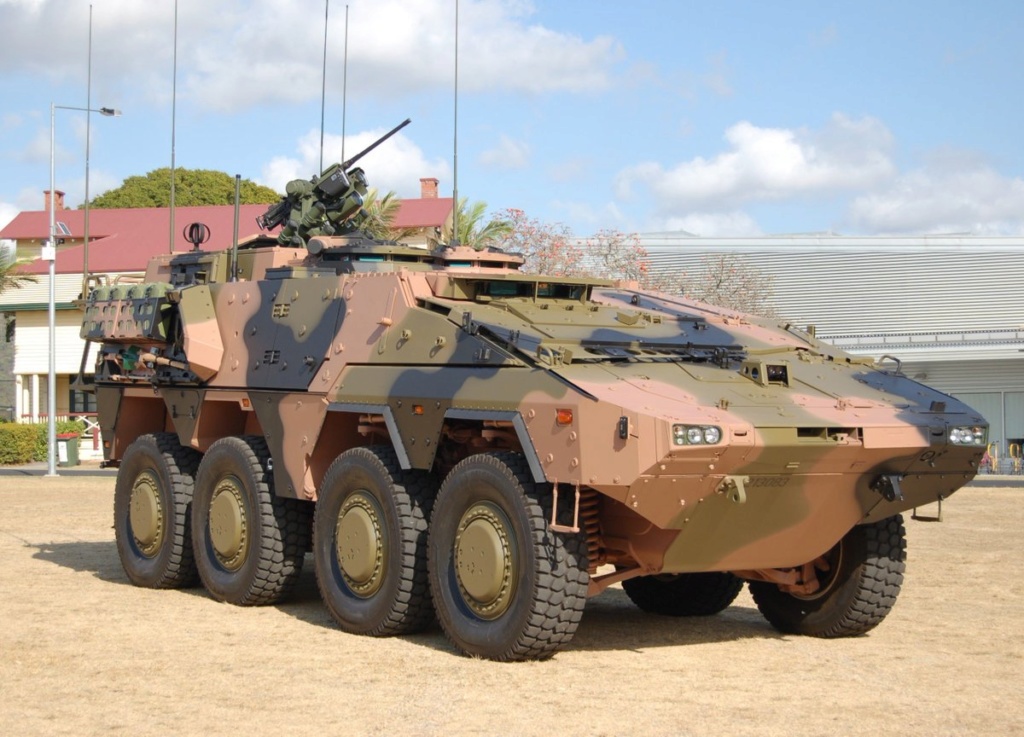 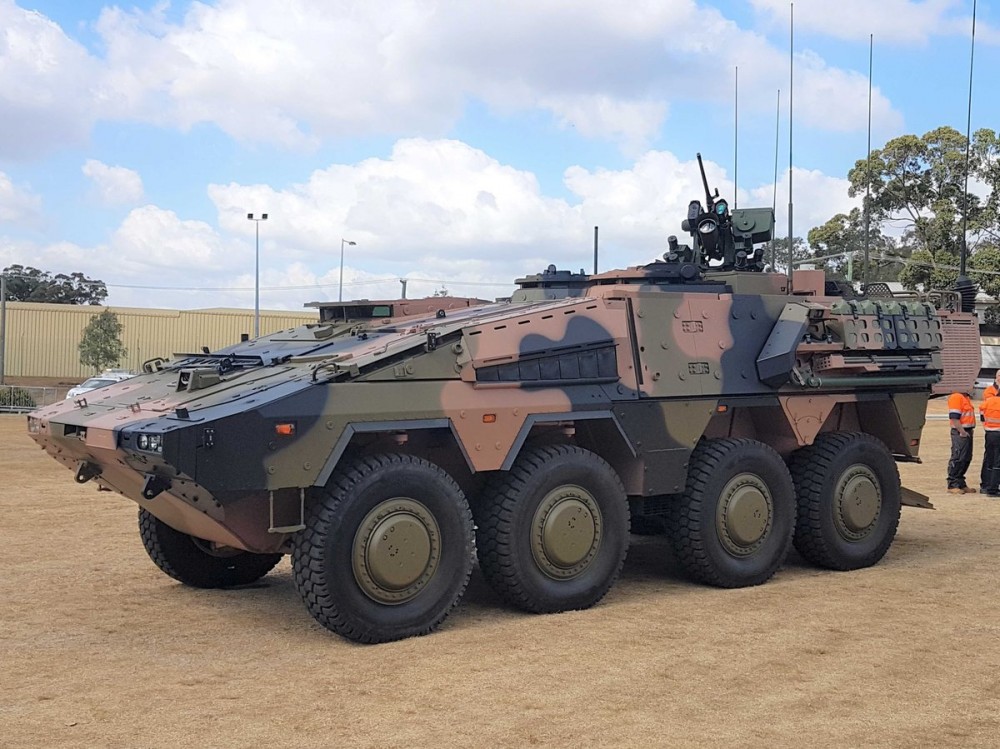 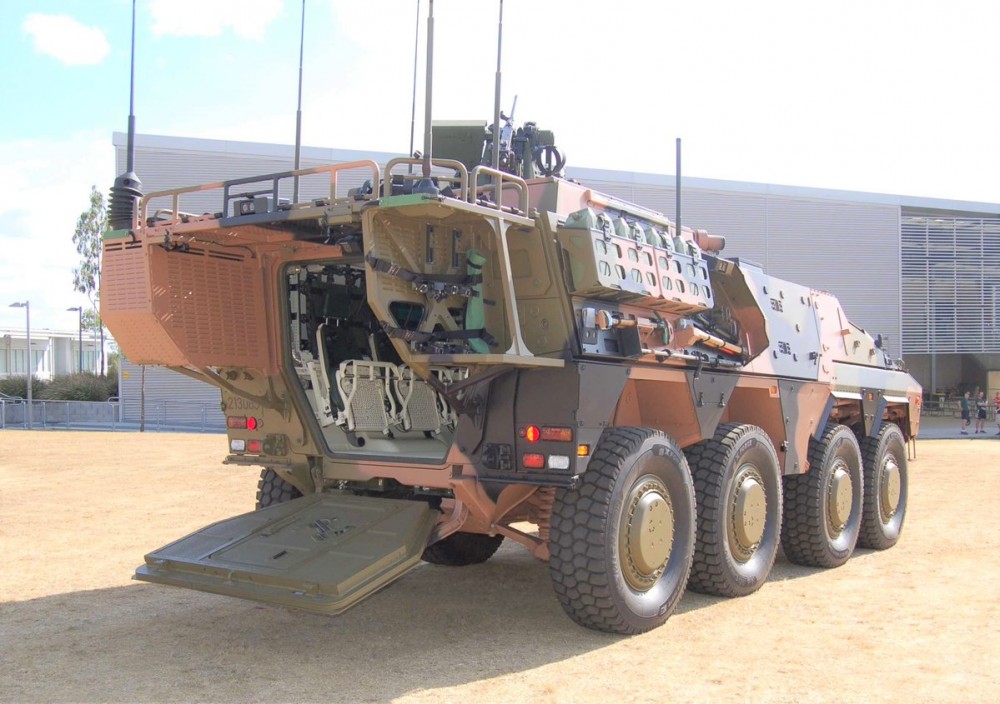 Concerning fleet costs, the 2020 Defense Strategic Update and 2020 Force Structure Plan express their commitment to implement the accepted programs for the construction of the Australian Navy with 12 large Attack non-nuclear submarines, nine Hunter frigates, 12 Arafura patrol ships, six large Cape patrol boats and two ships of complex supply type Supply. It also announced plans for the Australian Navy to build two multi-functional transport vessels / supply ships, an icebreaking vessel for operations in the Antarctic waters, a sailing training ship, a vessel for communication with the Pacific states, a rescue vessel, as well as a series of patrol ships based on the Arafura type eight mine and hydrographic vessels. It is also planned to purchase mine weapons "to protect naval approaches to the coast of Australia," long-range weapons for attacking ground targets (that is, cruise missiles), and new tactical ship-based UAVs.

The total cost of all these and prospective shipbuilding programs, starting with Attack-type submarines, as well as repair and modernization of cash ships of the Navy, is estimated at 183 billion Austrian dollars (up to 127 billion US dollars) for the period until the 2040s.

The development of the Air Force confirms the line to create a combined fleet of combat aircraft from the F-35A Lightning II and EA-18G Growler, as well as plans to purchase long-range air-to-air and air-to-surface weapons, as well as “potentially hypersonic weapons” . It is also planned to develop ground-based air defense and missile defense systems and the purchase of additional military transport aircraft C-130J.

In the field of ground forces, plans have been announced for the acquisition of infantry fighting vehicles, engineering vehicles, long-range missiles, self-propelled artillery, freight vehicles, vehicles for special operations forces, UAVs, transport helicopters and landing boats. It is planned to replace the Tiger combat helicopters and modernize the M1A1 Abrams tanks, followed by studying their possible replacement.

The announcement of the choice of the K9 self-propelled howitzer by the Australian Department of Defense was confirmed by Hanwha Defense itself , saying that the estimated value of the contract will be about 1.3 billion Australian dollars (890 million US dollars, or about 1 trillion won).

The victory in the Australian tender was another export success for the K9 ACS on the world market - to date, these systems have already been purchased by five countries (Turkey, India, Norway, Finland and Estonia), and the K9 chassis is used for the production of the Polish Krab ACS. Transport-loading vehicle K10 of the South Korean army (c) Hanwha Defense

South Korean BMP AS21 Redback on trials in Australia

The LAND 400 Phase 3 program provides for the purchase of 450 tracked infantry fighting vehicles for the Australian army for a total of up to 15 billion Australian dollars (up to 10.3 billion US dollars), with the aim of replacing the old American M113AS4 armored personnel carriers as the main vehicle of the motorized infantry battalions. 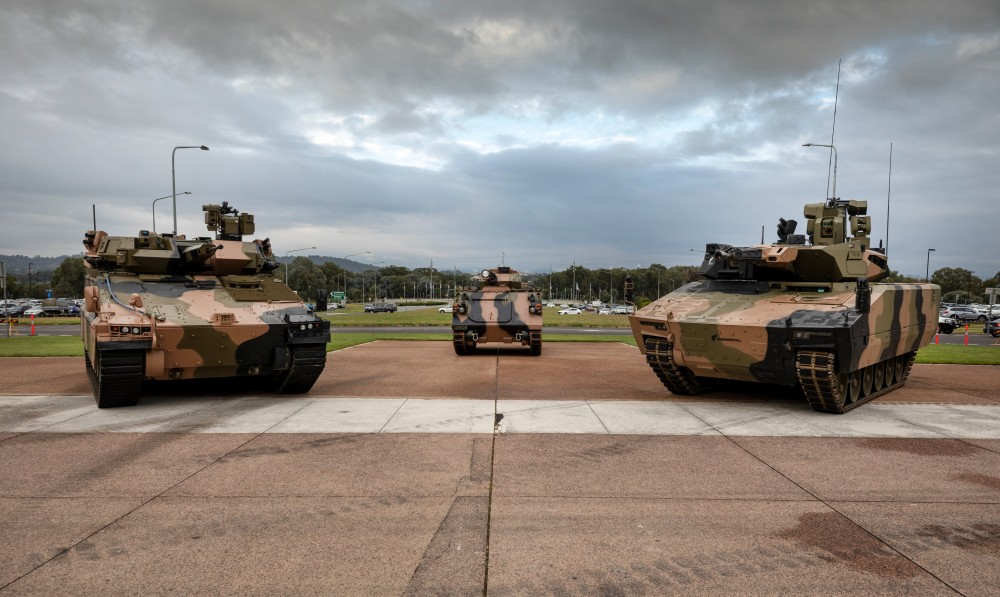 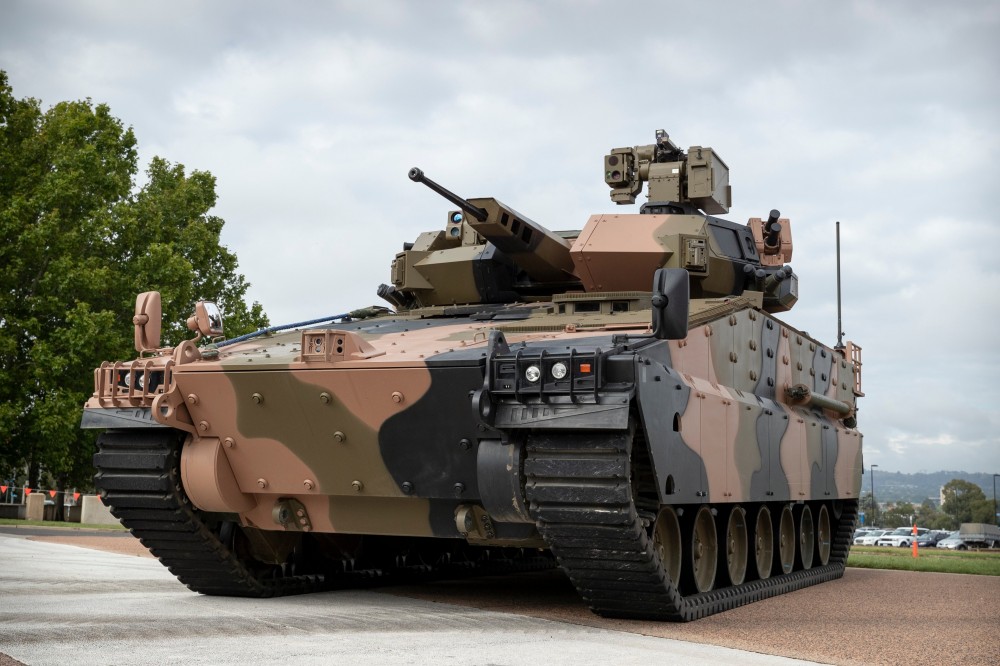 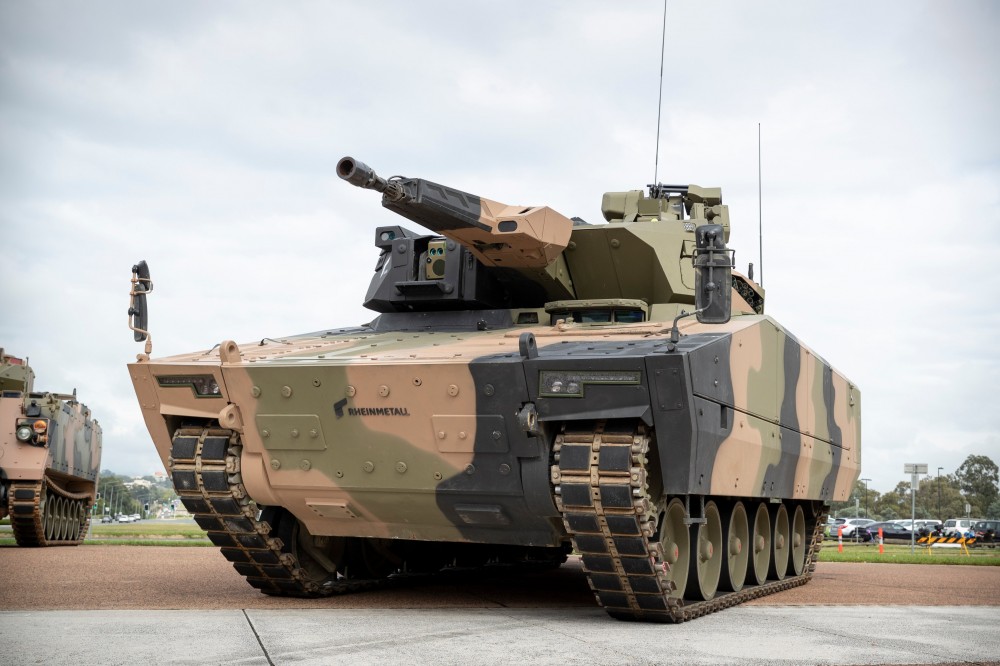 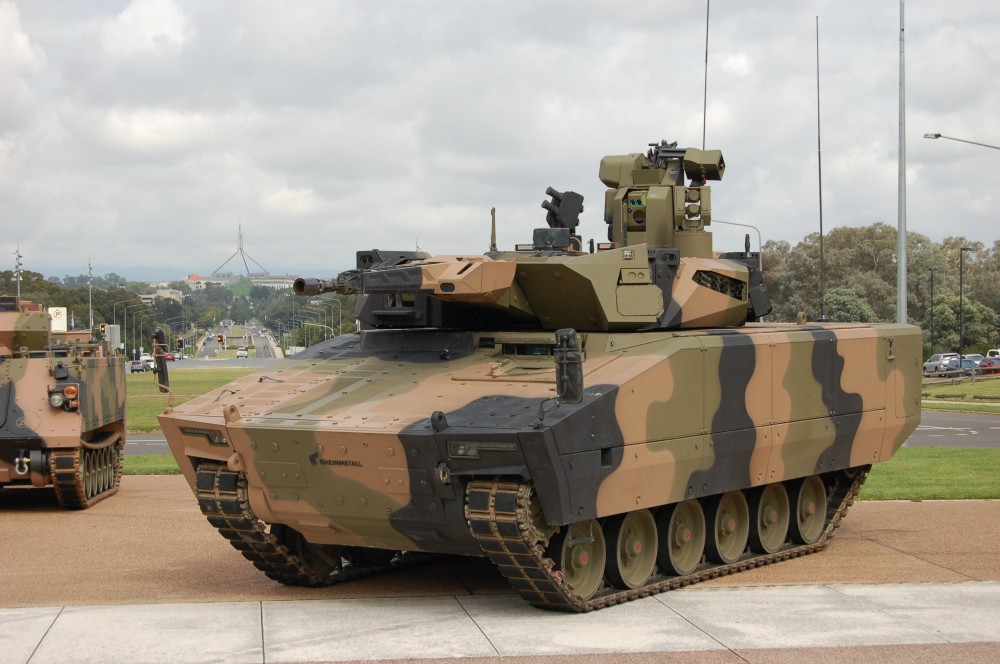 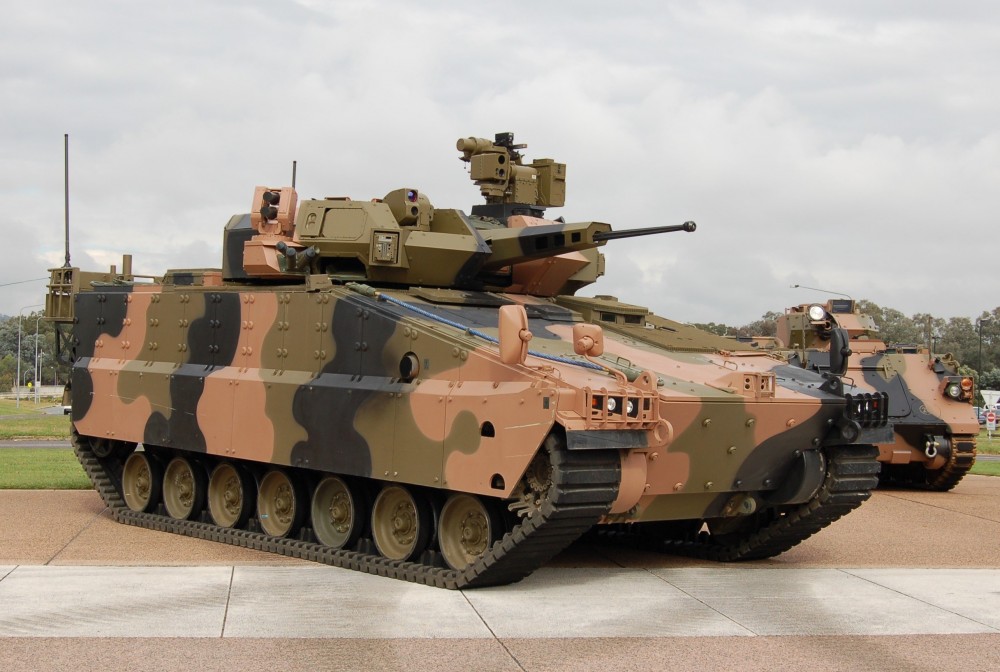 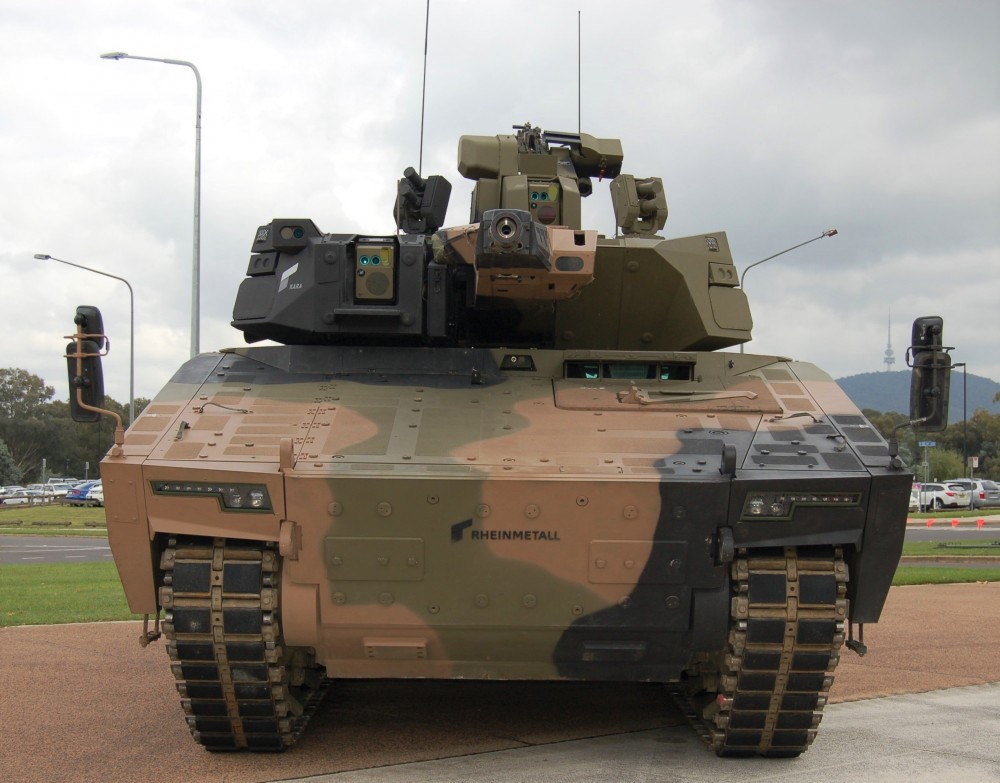 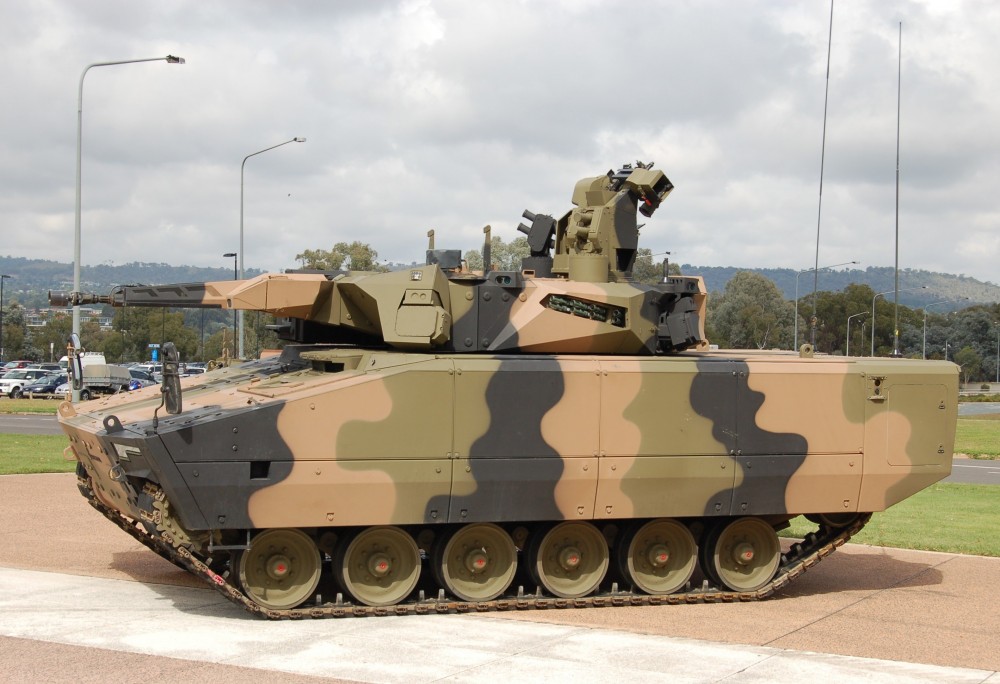 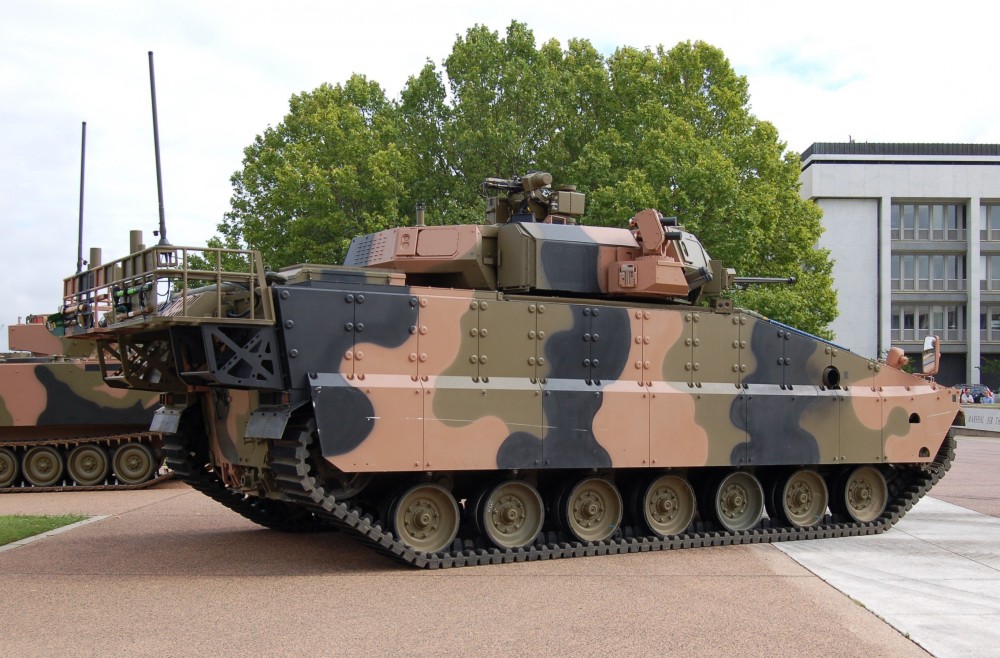