While it is a pro US forum;  the author makes a compelling case for Seaplanes.  If you can read the information for what it is and apply what he is saying to Russia, China, India or Iran.  These countries can have a compelling advantage over the U.S. and Nato.

Sea planes made a lot of sense in the early 20th century when there were few air ports but lots of harbours.

Sea planes are less aerodynamic and higher maintainence and really only make sense in particular situations... sea rescue, and fire fighting are two that spring to mind...

Garry B did you read the two articles? I think the author makes a compelling case for seaplanes as a weapon of war. He is says how some corrupt elements in the military played down the seaplane success in World War II.
GarryB

He is a very angry person isn't he?

the picture of the prop fighter with wingtip mounted AMRAAMs says it all...


Armed with AMRAAM BVR and short-range Sidewinder AAMs, SC-3s could engage even supersonic fighter jets and shoot them down. With two sets of eyeballs scanning the skies with sensors looking in all directions, its very likely the SeaHawk III crew will see the MIG first and shoot first.

And which model Mig will ignore detecting this fighter at ranges in excess of 80km and will wait till it is within visual range before opening fire?

As I mentioned... being able to operate from water requires fairly calm water... it compromises the aerodynamic shape of the aircraft which introduces more drag and weight which is never a good thing, and it increases maintainence requirements... expensive modern jet engines don't like salt water and there are limits to what you can do with regard to corrosion resistance.

I personally think the airship is something worth bringing back... with modern materials like carbon fibre and strong fabrics and of course new technology like fuel cell technology allowing the use of hydrogen as a fuel and a lifting gas and also when put through a fuel cell as ballast then they become much cheaper and more flexible.

You could design an airship to operate at 30,000m or 40,000m where there is very little oxygen so hydrogen wont even burn. The main problem with airships has been the waste of hydrogen to descend and climb and the complicated use of ballast.

to start with the airship must be neutrally buoyant. Send it to a location to pick up the payload, but to load the payload on you have to drop ballast to maintain buoyancy. Once fully loaded with payload and fuel you start to fly to the destination but as you travel you burn fuel and get lighter so you need to release lifting gas or you just keep climbing.

Once you get to the destination you need to offload the payload while at the same time take on ballast... usually water or sand bags.

For a naval airship loading enormous radar antennas as part of the aircrafts structure so really all you need is lifting gas to get airborne and fuel to run the diesel engines plus some ballast and perhaps some self defence missiles.

To climb you can use electricity to create more hydrogen from water ballast or you can burn diesel fuel. to descend or stop climbing hydrogen can be put through the fuel cell to create electricity and heat so reducing ballast and increasing lifting gas. The Diesel engines also produce heat which improves the performance of hydrogen lifting gas.

Alternatively a small nuclear fuel cell like the ones used on satellites could be used together with a fuel cell to enable a large radar to be operated with the flexibility the hydrogen fuel cell offers in terms of ballast/lifting gas management.

Regarding the second article about bringing back heavy sea planes... what does he mean by back?

(Sorry to post Wiki at you but it is handy..)

Some of the authors points are rather far fetched.

Anyways the #1 problem with a fighter-type seaplane, aerodynamics. No matter what, performance will always suffer. Dorsal intakes are mandatory, and the unfortunate thing about dorsal intakes is they cannot breathe at a high AoA. This physical limitation prevents them from being feasibly used on a fighter aircraft.

#2, payload. You cannot hang fuel tanks or missiles below the wings, unless you want a high wing configuration or pontoons. Both configurations will severely cripple performance. Weapon bays may reduce the problem, but the lack of external fuel tanks will continue to be a drawback.

#3, They STILL have the logistics ball and chain. They need to operate near a support vessel, as they would need to be refueled and rearmed.

GarryB, I'm 100% behind the airship idea. Their comeback is long overdue.
GarryB

Sea still carries the vast majority of trade and commerce around the world.

Ships are potentially very vulnerable but as a group and fully supported by air and land forces they can be very powerful and also the only way to reach some targets.

Some cheeky fishing boat sitting off your coast fishing illegally in your waters... it makes sense to send a boat after it rather than a plane.

The west has found its naval forces very useful in supporting operations including in Afghanistan, Kosovo, etc etc and likely will continue to do so. Even with a badly neglected naval force Russia has already used ships near Syria and even to an extent Venezuela to show support and as political symbols. In 10 years time when the Russian Navy is in much better shape they might represent real military power projection too.
andalusia

I think Seaplanes should be apart of Russian naval strategy; yes they have some limitations but they have their advantages:

I think Seaplanes should be apart of Russian naval strategy; yes they have some limitations but they have their advantages:

I know this American is talking about the advantages of seaplanes for US Navy but it could work for Russia or China.

There is the Soviet/Russian Beriev A-40/A-42 project, based off the Be-200 airframe. Recently revived I think

It's a seaplane. And makes sense for the ASW and maritime patrol role. Can be armed with different types of buoys, depth charges, mines, torpedoes and anti-ship missiles. You can land it on the water and carry out accurate sensor readings with its hydro-acoustic equipment and other instruments.

But a fighter? No that's ridiculous.

flamming_python wrote:There is the Soviet/Russian Beriev A-40/A-42 project, based off the Be-200 airframe. Recently revived I think

It's a seaplane. And makes sense for the ASW and maritime patrol role. Can be armed with different types of buoys, depth charges, mines, torpedoes and anti-ship missiles. You can land it on the water and carry out accurate sensor readings with its hydro-acoustic equipment and other instruments.

But a fighter? No that's ridiculous.

Maybe not seaplanes but vertical take off drones the back of destroyers, corvettes, cruisers and frigates; they can be armed with missiles and torpedos:

Most VSTOL fighters are not actually very good fighters.

The idea of a seaplane is good for a range of missions.... even MPA you could design your plane so it can land near your refuelling ships and get refuelled at sea when the conditions are right for that.

Another aspect is something the US never even tried...

It is a fixed wing aircraft that is amphibious and uses a hovercraft like undercarriage so it can land on sea and on bit open flat areas like ice or snow...

One version was even supposed to be VSTOL... 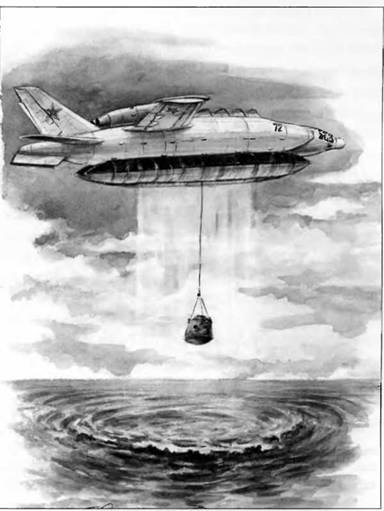 In terms of fighters I don't think it makes sense but for light transports to remote areas on large rivers or near the sea or even out in the desert or tundra...

But as I said they certainly do have some limitations, but in the Pacific Islands for instance flying from Island to Island... some of which are very small with no reason to waste large areas with runways.

Certainly much faster than helicopters and being able to land on the water in an emergency much safer and cheaper too.