Reuters, referring to the head of the Russian private military company of the RSB-Group, Oleg Krinitsina, reported that several dozen employees of this firm conducted an operation in Libya and left the country after it was completed in February. As the agency specifies, their task was the demining of the industrial facility in Benghazi. At the same time, the customer and the specific object, on which his employees acted, were not named.

The military commander added that any contacts in the future also can not go beyond the official ones. "How can I negotiate with a private company and why?" - said al-Manfur.

About the activities of Russian PMCs in Libya

According to the resource "opex360.com" in the article "Libye: Une société militaire privée russe a envoyé des démineurs près de Benghazi", in accordance with Article 359 of the Criminal Code of the Russian Federation, activities related to mercenarism can be sentenced for up to eight Years imprisonment. However, this does not prevent the existence of private military companies (PMCs), such as Moran Security Group (registered in Belize), Tiger, Antiterror-Orel, Slavonic Corps (registered in Hong Kong) or RSB-Group headquartered in ... Moscow.

Since 2012, several attempts to legalize the activities of PMCs have failed because of the opposition of the Russian Defense Ministry and the FSB, which have negatively affected the establishment of such organizations, because of fears that such structures, financed by oligarchs, may run counter to the interests of the state. But, in fact, they are tolerated with their presence.

So, in recent months it was reported on the actions of PECs Slavonic Corps and Wagner (created by Dmitry Utkin, a former GRU officer) in Syria. The same was reported about the Donbass.

Although two Slavonic Corps executives Vadim Gusev and Yevgeny Sidorov were sentenced to three years in prison for hiring 267 Russian citizens to take part in the fighting in Syria, although they were told that they would protect oil infrastructure facilities, some PMC leaders feel confident , As Dmitry Utkin, who was seen at a reception in the Kremlin in December 2016. And the employees of the "Wagner Group" carried out operations in Syria in close cooperation with the Russian army.

The uncertainty of the legal status around the PMC is "very useful", since "officially" Russia can say that it does not participate in ground operations in Syria. And if the staff of PMCs are killed, this is not a problem of the Ministry of Defense, because in this regard there is no resonance in the media.

This appeal to the services of PMCs also allows Moscow to operate in those territories for which there is no intention of seriously interfering. The founder of the RSB-Groups and the graduate of the "KGB academy" Oleg Krinitsyn likes to repeat that "what is not forbidden is allowed". In an interview with the French newspaper Le Figaro last year, he claimed that 86 of his staff, all former military men with experience, carry out demining operations in Libya, in the interests of an unnamed customer.

A few months later Krinitsyn raised the curtain over the secret in an interview with Reuters. According to him, about 12 Russian PMCs sent dozens of people to the zone controlled by the national Libyan army and report to Marshal Khalifa Haftar and the authorities in Tobruk that are not recognized by the international community.

The presence of these "counterattacks" was a simple "commercial agreement," Krinitsyn specified. Their mission, which ended in February, was the demining of industrial infrastructure in the area of ​​Benghazi, which were repulsed by the forces of Haftar from the Islamists. In addition, according to Krinitsyn, PMC has the ability to protect their lives and the lives of their customers. In addition, he noted that "according to the military canons, the attack must be followed by a counterattack. And this means that we must destroy the enemy. "

The head of the RSB-Group also noted that his company did not work with the Russian Ministry of Defense, but, on the other hand, had contacts with the Ministry of Foreign Affairs. He did not specify whether the "mission" of contractors was approved by the government of national consensus, formed under the aegis of the United Nations. But all the facts show that this was not.

Support of Marshal Haftar by Russia is not a surprise. However, Moscow is trying to play its role in the settlement of the Syrian conflict, trying to establish a dialogue between the two warring governments. On March 3, the head of the government of national reconciliation, Fayez al-Sarray, paid a visit to Moscow.

Haftor is also assisted by Egypt and the UAE, as well as by Frania, which sent troops, advisers from the General Directorate of Foreign Intelligence (DGSE) to his disposal.

Note bmpd. It is interesting that today, with reference to the Reuters news agency, information appeared that US and Egyptian military and diplomatic sources reported that Russia deployed a limited contingent of 22 military and unknown numbers of unmanned aerial vehicles at an airbase in Egypt on the border with Libya.
Agency sources said that "the United States noticed something that could probably be Russian troops and unmanned aircraft" in the Sidi-Barrani base, located 100 kilometers from the border of Egypt and Libya. According to the interlocutors of Reuters, the purpose of this placement should be "support for the commander of the Libyan army Khalifa Haftar," who on March 3 was defeated in battles with rebels from the Benghazi Defense Brigade, who attacked the oil ports controlled by his forces.
Cairo denies the presence of the armed forces of other countries. "On the territory of Egypt there are no foreign military forces from any country. This is a matter of sovereignty, "the agency said.

Found this interesting. Sounds true but I don't know much about the subject. First paras more at link

Mercenaries are illegal under Russian law, but that doesn’t stop them from being a central element of the Kremlin’s geopolitical adventurism, whether in Ukraine or, even more clearly, Syria. The tale of Wagner, a St Petersburg outfit at the heart of the fighting in Syria, says much about the privatisation of statecraft and the mobilisation of private enterprise in modern Russia.

The private security industry is a major sector in Russia, but private military companies (PMCs), those directly involved in fighting in combat operations rather than simply guarding people, goods and facilities, remain outside of Russian law. ChVK (Private Military Company) Wagner, despite having offices in St Petersburg and a training camp on the grounds of a Russian commando base in southern Russia, has managed to thrive, perhaps because its main client has been the Russian state and its Syrian ally.

JohninMK wrote:Found this interesting. Sounds true but I don't know much about the subject. First paras more at link

Mercenaries are illegal under Russian law, but that doesn’t stop them from being a central element of the Kremlin’s geopolitical adventurism, whether in Ukraine or, even more clearly, Syria. The tale of Wagner, a St Petersburg outfit at the heart of the fighting in Syria, says much about the privatisation of statecraft and the mobilisation of private enterprise in modern Russia.

The private security industry is a major sector in Russia, but private military companies (PMCs), those directly involved in fighting in combat operations rather than simply guarding people, goods and facilities, remain outside of Russian law. ChVK (Private Military Company) Wagner, despite having offices in St Petersburg and a training camp on the grounds of a Russian commando base in southern Russia, has managed to thrive, perhaps because its main client has been the Russian state and its Syrian ally.

OMG, Mark Galeotti at it again...

First of all, mercenaries definitely are illegal under Russian law, however Russian law does not apply outside of Russia. You don't need to be a lawyer to know that it's a slam-dunk case.

And as for training camp I don't see how it's any different from paramilitary ''patriotic clubs'' in Poland and Baltics or simple historic reenactment society...

This fighter appears to be with the mysterious Turan unit in #Syria.Turan is apparently made up of contractors from Russia & post-Soviet states.Note milled receiver AKS with FAB Defense furniture and 30-round mag. 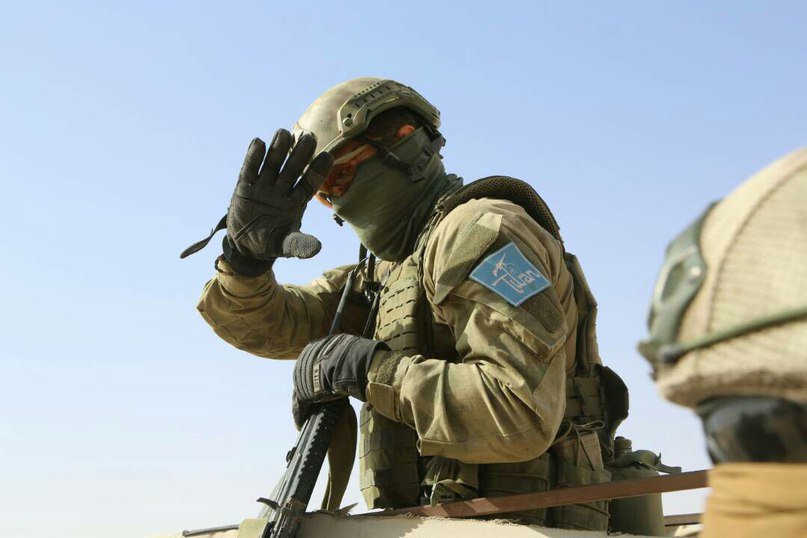 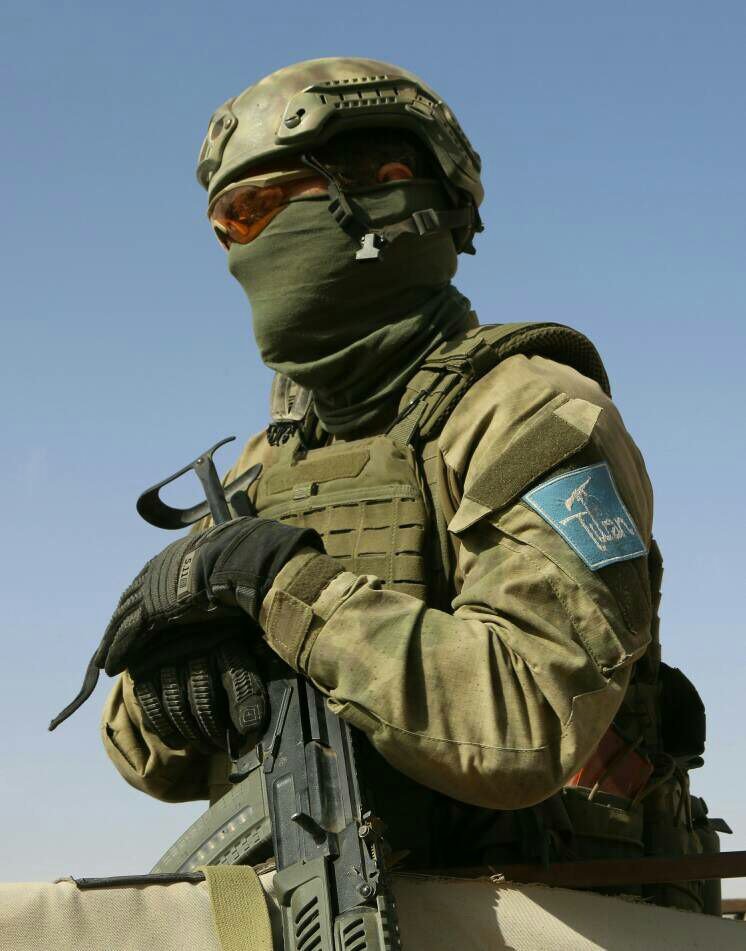 The activities of Ukrainian and Russian private military companies in Africa

The first PMCs appeared in Ukraine even in the time of the presidency of Viktor Yanukovych. For example, the company Vega Strategic Services, founded in May 2011 and Omega Consulting Group, created in 2013 by Andrey Kebkalo, one of the founders of Vega Strategic Services. At the moment, the state does not have a clear opinion on these companies. The Ministry of Defense of Ukraine for a long time believed that these companies provide mercenary services (and the company refutes it) and until the last moment took a negative position towards the prospects for the development of this market, which could lead to a reduction in the number of trained reservists. But the deputy of the Ukrainian parliament Yevgeny Dayday recently announced his intention to introduce a draft law on the legalization of military companies.

This reversal happened at a time when Russian PMCs also penetrated into Africa. The Russian "Forces of Special Operations", which protect the president of the Central African Republic (CAR) Faustin Arshanja Tuader, are in fact employees of PMCs. The presidential guard now consists of employees of the "Wagner PMs", the sources of the bulletin reported, which confirms the report, a widespread resource of the Conflict Intelligence Team on April 23, 2018. This contract is of increasing concern to Western embassies. The company was founded by Dmitry Utkin (call Wagner), a former lieutenant colonel of the GRU of Russia. The contract of the company in the CAR was part of a large package of contracts for the supply of weapons, concluded in December 2017.

Under the contract with the Russian government, people of Wagner's PM were also deployed in the east of Ukraine, and later in Syria. In Syria, the company exists under the name Evro Polis and supports both operations of the Russian armed forces and the protection of the facilities of the companies Lukoil and Gazprom. Wagner could also appear in the Sudan.

Like the Ukrainian parliament, the Russian State Duma has been considering from the beginning of the year about legalizing PMCs. Previous attempts were unsuccessful.
In addition to political interests, Ukrainian or Russian companies have advantages in the eyes of potential customers: their personnel has experience of conducting asymmetrical fighting and are satisfied with reasonable salaries. And the premium for risk is greatly reduced. The initial salary in the Wagner PMC is about $ 2,000.