Right now is Mongolia turning to  the west, china- aligned, or turning more pro-Eurasian ? We haven't heard about them like...ever.

Anyway I know they keep a token military that uses old soviet vehicles, mostly BTR-60s I think. Anyway back to my question how much interest in buying Russian equipment or equipment in general and has any contract been signed for something?
TR1

They got T-72s and BTR-70Ms from Russia a couple of years ago.
George1

As part of the current contract with Mongolia was put another batch of modernized T-72 tanks, armored personnel carriers BTR-80 [in fact, the BTR-70M - bmpd] and associated equipment designed to increase the country's defense.

At the ceremony, which took place in the 1st mechanized infantry brigade of general purpose forces of Mongolia, attended by Ambassador Extraordinary and Plenipotentiary of the Russian Federation in Mongolia I.K.Azizov, military and air attache at the Russian Embassy in Mongolia Colonel G.M.Sulimuk, Minister of Defense of Mongolia Ts.Tsolmon, Chief of the General Staff of the Mongolian Armed Forces, Major General D.Davaa and other officials. In his speech, Ambassador of Russia said: Over the years, cooperation in general to Mongolia received military aid to the country in the amount of about three billion US dollars, 95 percent of which - free of charge. Today's event is symbolic because only the Russian Federation to Mongolia supplying military equipment necessary for the organization of defense of the country and its territorial integrity, reflecting the special nature of our time-tested cooperation.

Ts.Tsolmon Minister, speaking to the audience, also stressed the close ties that bind our two countries in the field of military-technical cooperation, recalling the Russian-Mongolian brotherhood in battle during World War II and the liberation of North-East Asia in 1945. Focusing on the successful experience of the annual bilateral military field exercises, the Minister expressed his gratitude to the Russian Defense Minister Sergei Shoigu Mongolia for providing military-technical assistance.

Cooperation between Russia and Mongolia in the military-technical and defense spheres is developing rapidly and has a rich history dating back to 1921. Over the decades, Mongolia supplied a significant number of armored vehicles and aircraft, combat aircraft and helicopters, artillery and air defense weapons. At the present stage of Russian-Mongolian cooperation is based on an intergovernmental agreement on the provision of Mongolia's military and technical assistance on a grant (2004) and the Medium-Term Program of the Mongolian-Russian military-technical cooperation (2014). 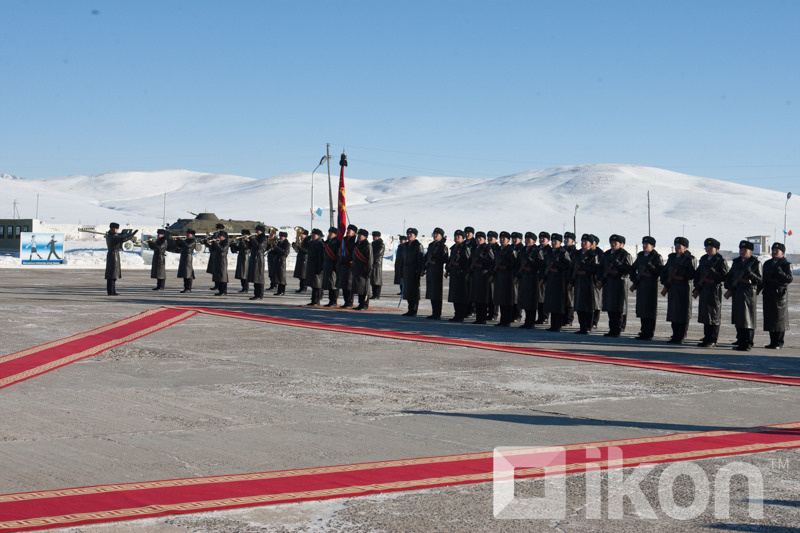 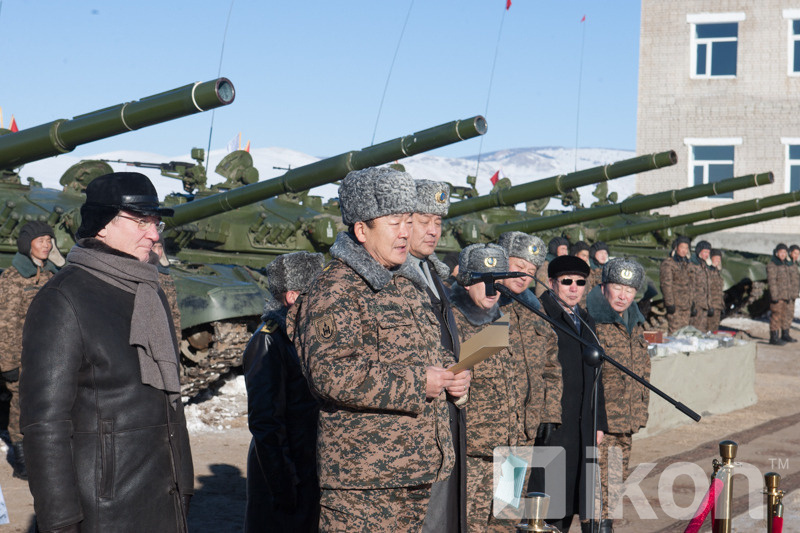 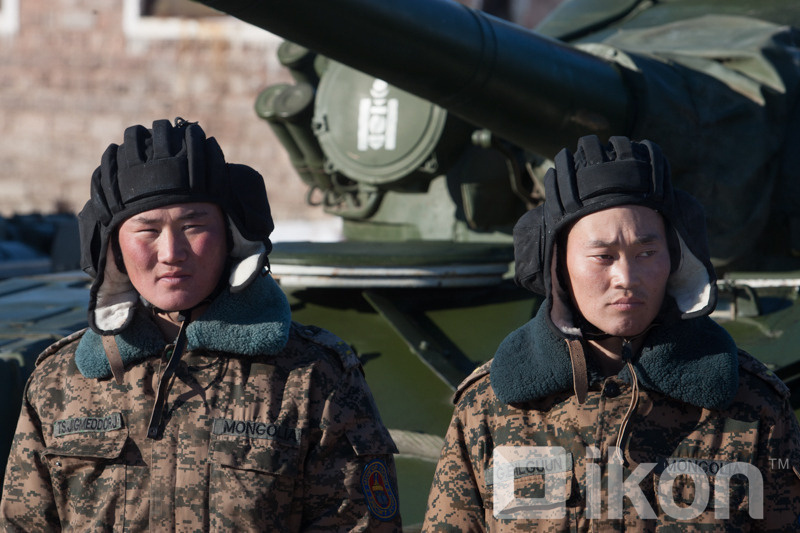 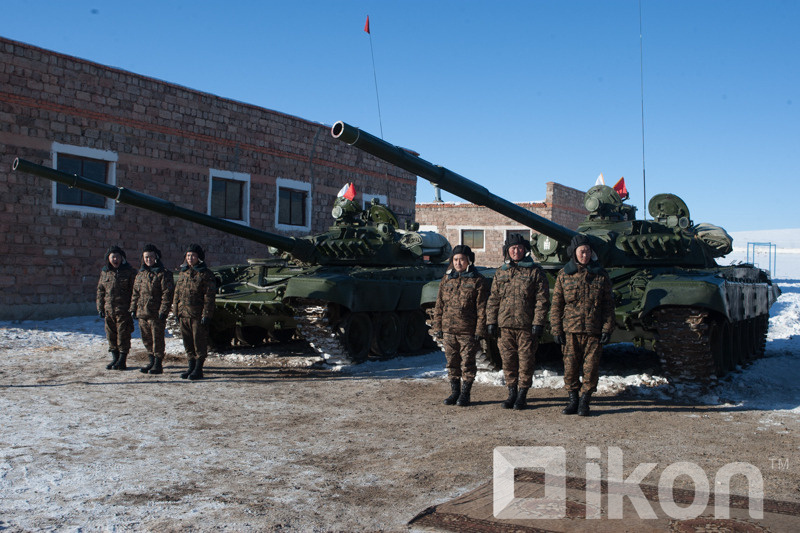 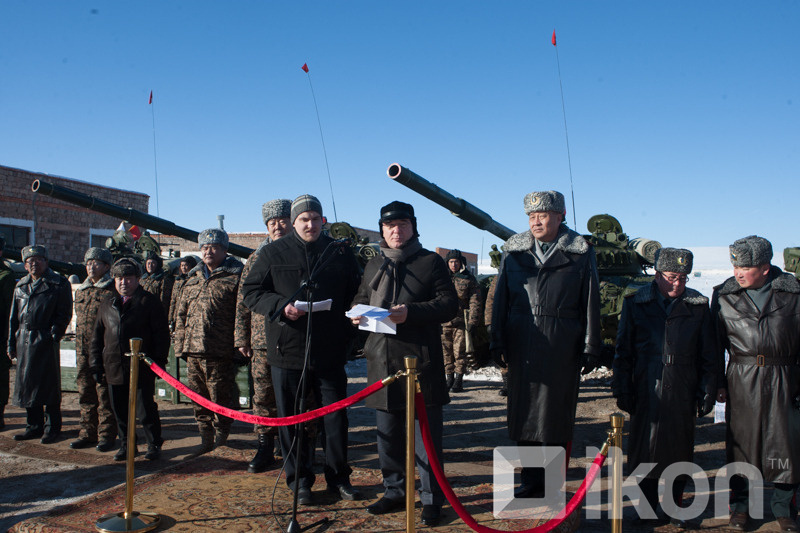 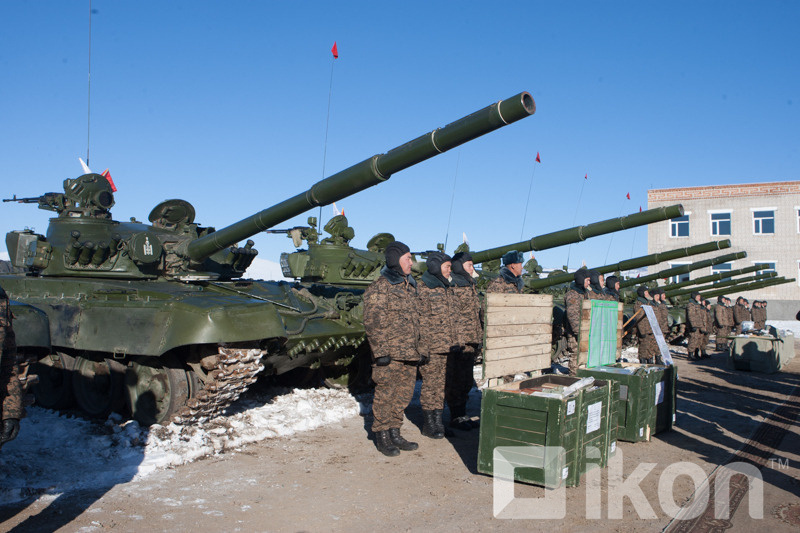 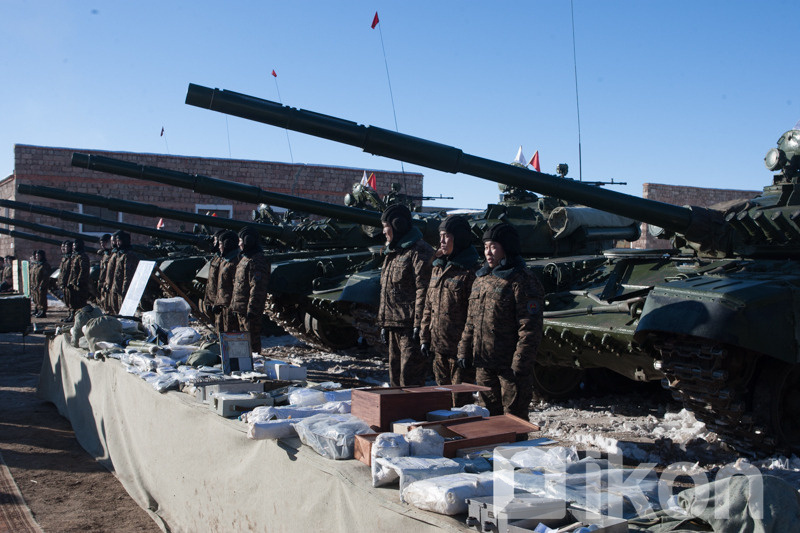 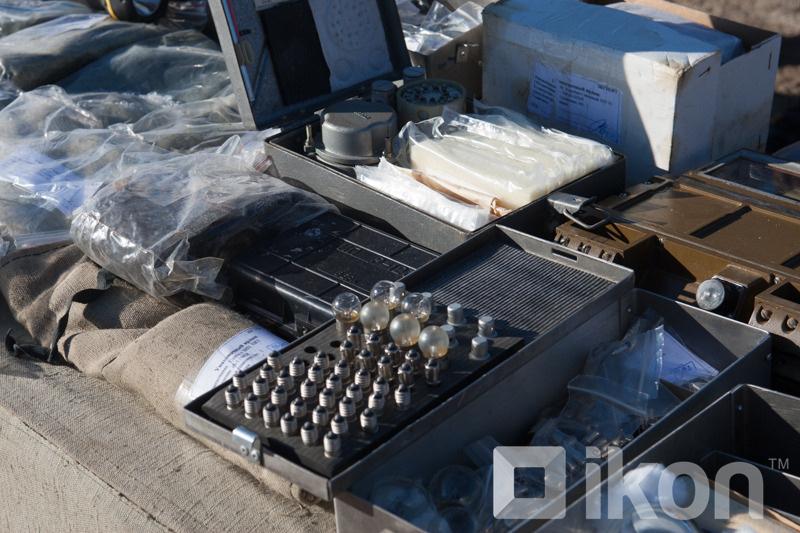 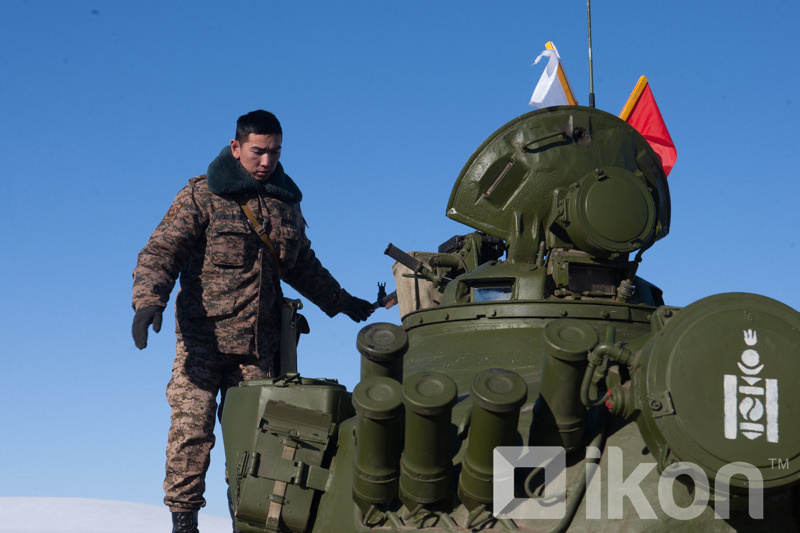 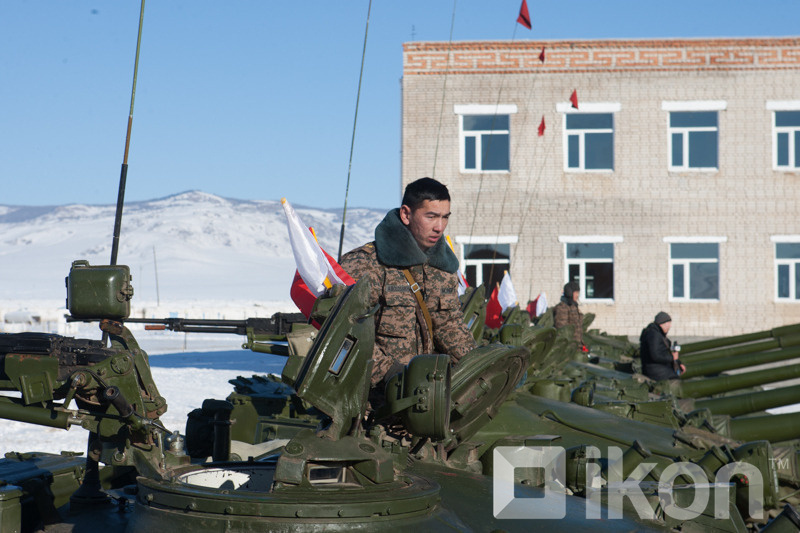 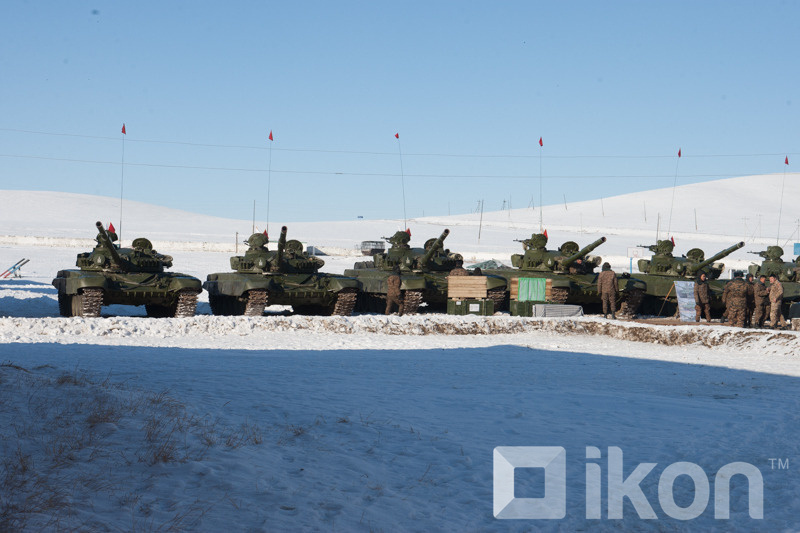 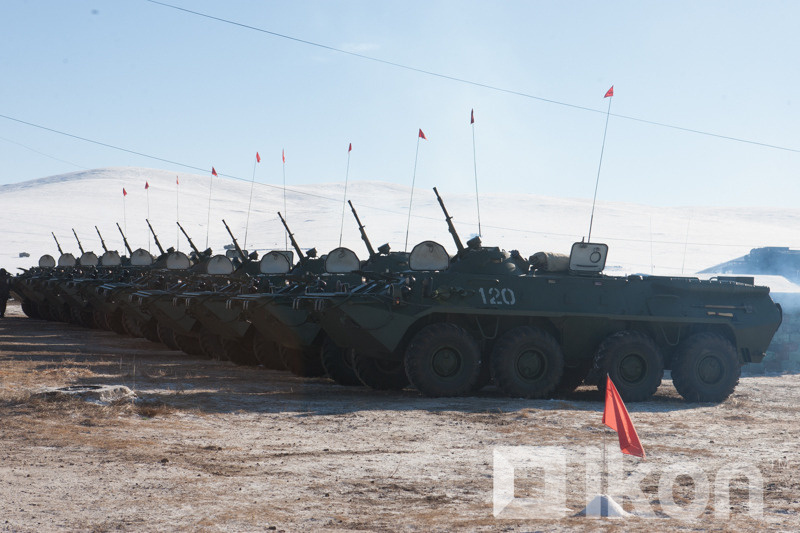 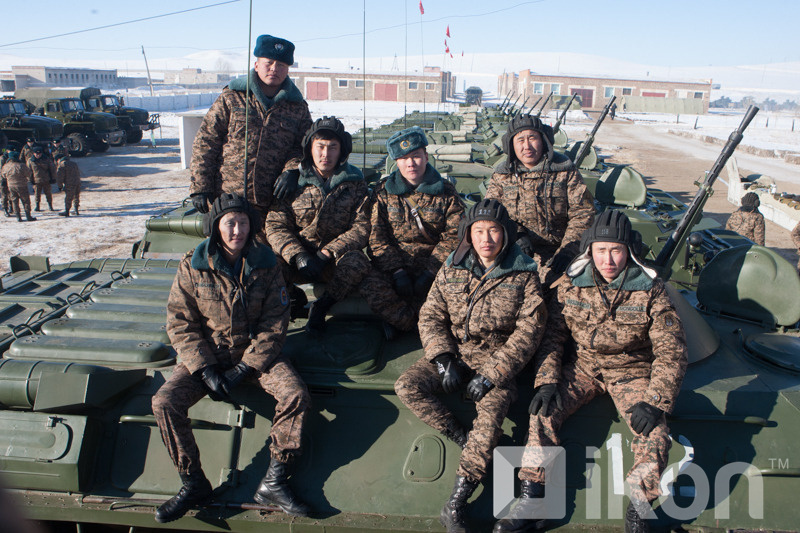 Mongolia doesn't really need much a military force really, the only real thing it would ever be used for is in emergency situations such as natural disasters and possibly in a small isolated case of terrorism which is at such a low level of terrorism threat its almost non-existent so doesn't need a serious amount of decent high end equipment. If Mongolia insists of having a reasonable armed forces then here are my views on it.

I personally looking at what they have they probably have too many tanks, instead of getting T-72 they would have been better getting there T-55 upgraded something along the same type of upgrade as the Egyptian Ramses, this alone would have been enough. The BTR 60/70/80 are good enough Mongolia ideally needs highly mobile forces if anything further purchases would be better spent on BTR-82A and Tigr-M and possibly some Ural or Kamaz Typhoon especially ones with the remote turret. Other upgrades could be done to there BM-21's and their BMP-1. They have a reasonable amount of artillery despite no SP artillery, for this they would be better to buy 2S23 "Nona-SVK, but if they did want some with more range etc, then Russia has plenty of 2S1 and 2S3 in stock that it could sell.

A couple of areas where Mongolia are lacking is air defence, aircraft, and infantry anti tank weapons.

For anti tank weapons Russia could easily sell them AT-4 and AT-5, and some various shoulder launched anti tank weapons, and a small number of Kornet D(Kornet mounted on Tigr-M) this would be enough or another option would be for them to convert some of their BRDM-2 into anti tank platforms carrying AT-4, AT-5, AT-6 or even purchase some MT-LB armed with AT-6.

For aircraft side of things, they could upgrade their Mi-24's to be able to operate day/night and in all types of weather depending on the quality of their airframe, if their knackered they could just operate/buy Mi-171Sh attack heli's and add some more Mi-17 transports. As for fixed wing 6-8 multirole attack version of YAK-130 would be enough, for their needs. Their was talk of Mongolia buying the YAK but nothing has materialised. Another possible useful aircraft would be a couple of Mi-26T2.

And finally air defence, Mongolian air defence is pretty dated, buying some SA-24 MANPADS, and some BUK would be suffice, as well as getting their ZSU-23-4 upgraded to ZSU-23-4M5 (and host of improvements including addition of SA-24) and get is SA-9's upgraded, and if you add all this to their existing air defence of SA-2(S-75M), SA-3(Pechora-2M) and various AA artillery and as I mentioned above of the multirole YAK-130 carrying some form of AA missiles and they would have a fit for purpose air defence. Other minor upgrades could be done to their AA artillery that they currently have ZPU-4, ZSU 23-2, S-60 and 61K, upgrades could include mounting them on trucks or MT-LB to make them more mobile and adding to this a decent fire control systems/radar controlled and they would prove deadly against Helicopters, low flying aircraft and UAV's. Also to note some of their ZSU23-2 could be given the ZU-23M1 upgrade (fire controls sytems etc and addition of SA-24) and all of these systems could also double up as ground fire support. They could also buy SA-8, SA-13, and Tunguska systems as Russia looks to replace these systems and Mongolia would get a reasonable deal on them.

So really for not much investment and mostly through upgrades, as well as a little procurement, and of course some good training and Mongolia could have a reasonable armed force.

medo wrote:Few days ago I read rumors, that Mongolia want to buy 12 Su-30SM fighters for 600 million $. Anyone have any more information regarding Mongolia buying Su-30SM fighters or this was an April 1st joke?

Probably the 2nd, i don't think that Mongolia has money for Su-30SM. They didn't even acquired the 2nd hand MiG-29s that have been mentioned years ago
d_taddei2

medo wrote:Few days ago I read rumors, that Mongolia want to buy 12 Su-30SM fighters for 600 million $. Anyone have any more information regarding Mongolia buying Su-30SM fighters or this was an April 1st joke? 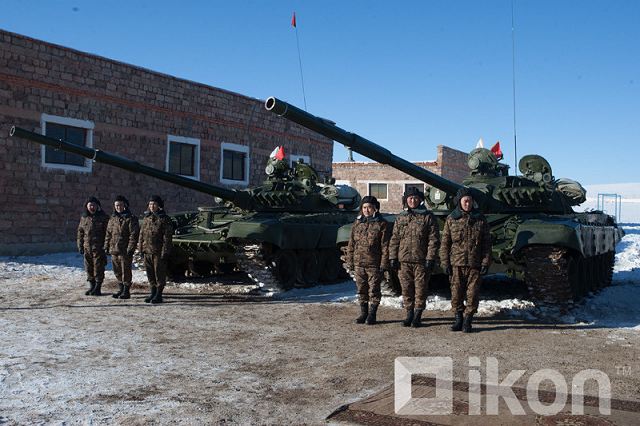 Mongolia has already received T-72A main battle tank from Russia
"I informed the defense minister that we had worked out the basis of Mongolia’s military policy, a package of defense laws had been adopted in line with the policy and specific tasks had been set to the armed forces," the Mongolian defense minister said.

"In this context, we asked Russia to provide support in rearming and strengthening our armed forces, in particular, the newly-formed air defense force," he added.

According to Bat-Erdene, Russia is assisting Mongolia in training its troops. About 350 Mongolian servicemen are currently studying at 20 Russian military schools on favorable terms or free of charge.

The Mongolian delegation headed by the defense minister has arrived for the 6th Conference on International Security in Moscow. The conference started on April 26 and will last through April 27.

During the conference, Russian Defense Minister General of the Army Sergei Shoigu and the heads of Russia’s Security Council and Foreign Ministry will present Russia’s vision of the international situation and the reasons why the situation has become less stable.

In December 2015, Mongolia has take the delivery of Russian military equipment including T-72A main battle tanks and modernized BTR-70M APC. This transfer of combat equipment to Mongolia is provided in the framework of military and technical assistance of the Russian Federation.

In the past Mongolia has already received Russian-made military equipment including 100 main battle tanks T-72A, 40 BTR-70M APC, 20 BTR-80 and some military trucks.


Speaking about air defense, Russia could easily give them some 2S6 Tunguskas, or some Buk-M2s, or even some S-300s which are being replaced by the S-400 in Russia.
George1

Russia to hand over two MiG-29 fighter jets to Mongolia on its Independence Day Nov. 26

According to the Mongolian media, on November 15, 2019, two MiG-29 fighters arrived at the military airfield Nalai near the capital of Mongolia, Ulan Bator, transferred by the Russian Federation to Mongolia from the presence of the Russian Air Force.

The solemn ceremony of handing over the aircraft to the Mongolian side will be held on November 26, 2019 on the day of the 95th anniversary of the proclamation of the Mongolian People's Republic.

September 3, 2019 during the visit of the President of the Russian Federation V.V. Putin to Mongolia countries signed an intergovernmental protocol on the renewal of the agreement on the provision of Mongolia military-technical assistance at no cost. The agreement was signed on March 3, 2004.

Vladimir Putin, who was on a visit to Ulan Bator, said that military-technical cooperation between the Russian Federation and Mongolia is an important factor in stability and security in the Asian region.

Also, Mongolian bloggers write that up to this point in the arsenal of the country's air force there were only a few helicopters. But now Mongolia can exercise control over its airspace and, if necessary, force intruders to land.

An interesting video about combat training in the 16th motorized rifle brigade named after Marshal H. Choibalsan of the armed forces of Mongolia. Almost all weapons and military equipment supplied through military-technical assistance are sent to this brigade. In 2012-2016, the compound received T-72A tanks and modernized armored personnel carriers BTR-70M, as well as Ural vehicles from the deposits of the Russian armed forces under agreements concluded with the Russian Ministry of Defense in 2009-2010.

The largest military parade of the Mongolian army in recent years will take place in July this year and will be timed to coincide with the 100th anniversary of the Mongolian People's Revolution.