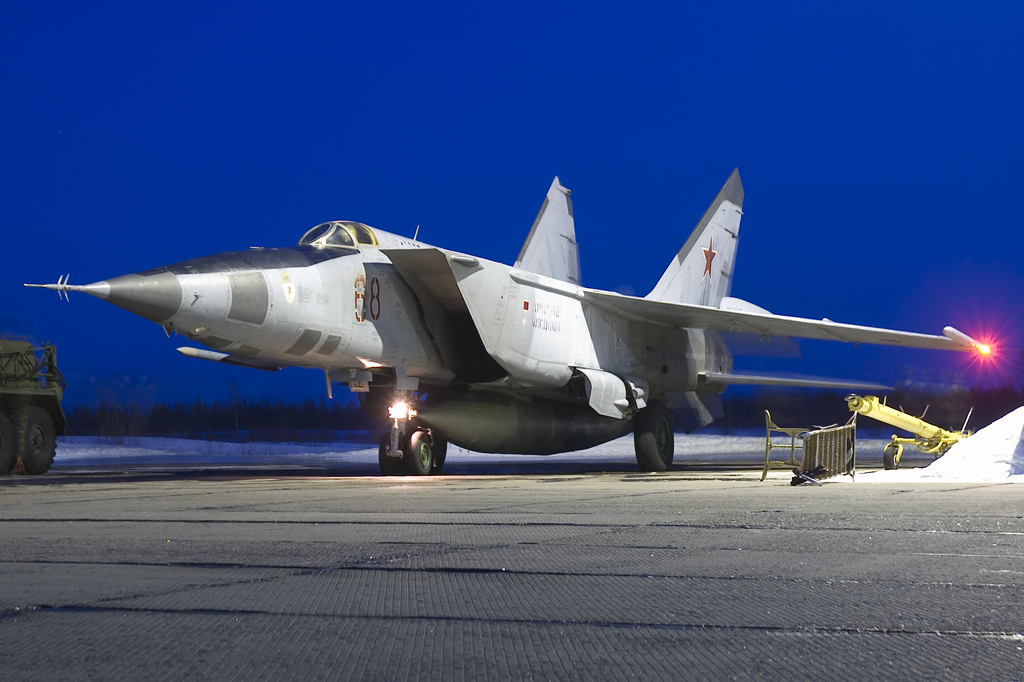 Would be interesting to see what difference more powerful engines would make to the performance of the MiG-25... especially engines designed to operate at very high speeds... some sort of bypass turbojet where the bypass air could be used as a ramjet at very high flight speeds...

Of course that new high temperature aluminium they are developing would do amazing things for the MiG-25 by making it much more heat resistant while making it much much lighter too.

Replacing old 1950s equipment with modern new stuff would also lighten it and make it more effective... I rather suspect more sophisticated and modern engines would make it much cheaper to operate too... lighter weight means it would climb and accelerate much faster and use less fuel doing so, and a modern ramjet mode turbojet means fuel burn sustaining high speed wont be too bad either... it would be an interesting aircraft for New Zealand to move around the huge airspace we have down here to patrol our large area of water that we manage. Aussie would probably find it useful too for mapping and locating things over its enormous territory.

The Foxbats had pretty impressive data collecting equipment, and with modern equivalents it would be able to collect enormous amounts of data per flight... including up to rather high altitudes too.

Would be an interesting science plane but being Soviet and Russian neither countries would even consider it of course.
d_taddei2

Am I correct in saying that the mig-21 is the oldest service fighter aircraft in service?

I know DPRK still have su-7, (although some sources say it came into production at the same time as mig-21) and still have Shenyang j-5 / j-6 and mig-15 as a trainer (which isn't used as fighter aircraft) we also have the issue of are they really still in flying condition. When they have their various parades u never see any of these flying only l-39, su-25, mig-29. So in theory we could ignore DPRK stats as very unclear and very likely out of service.

The F-5 is a similar age as is the Mirage III and the F-4, but from the figures I have seen, the MiG-21 entered service before they did, and most of the previous generation aircraft have been retired already... so you might be right.

Western experts wont mention that because it is not in their favour to do so.
d_taddei2

GarryB wrote:The F-5 is a similar age as is the Mirage III and the F-4, but from the figures I have seen, the MiG-21 entered service before they did, and most of the previous generation aircraft have been retired already... so you might be right.

Western experts wont mention that because it is not in their favour to do so.

yeah and they dont like to give any praise to the Mig-21. I know it had some teething problems at the start but doesnt all aircraft. that fact remains this aircraft is still pretty decent and even some western pilots have said it a worthy adversary. Check out the Indian and USA Cope exercise of how good the Mig-21 are makes a good read.

can i ask your opinion was the design of the aircraft good? in terms of the engine etc, you dont see that type of single engine aircraft any more (nose cone)

If Russia was determined to bring back a single engined aircraft do you think to save on costs they could redesign the Mig-21 and bring it back? a redesign as in make slightly bigger to fit better radar, upgrade avionics (which it has done over the years Bison, Bis, 93 etc) but still keeping it fairly small aircraft. I believe the engine is still pretty decent even in todays standards and there is always scope to improve it. I sometimes thing its better to take something thats older but still good and improve on it especially if the desired outcome isnt something too high tec or the needs arent as great. but as i mentioned on other threads this would most likely steal sales from yak-130 and Mig-29M2. But i would imagine a new upgraded and redesigned Mig-21 wouldnt cost that much to redesign in relation to building a new aircraft from scratch and it would cost less than a Mig-29M2. And it would appeal to current and previous countries who operate/operated Mig-21. and maintenance would be cheaper than Mig-29M2 and it would be better than the Yak-130. to me its not a bad idea. and if it can steal sales from F-16, Gripen, T-50
Sponsored content