The point about sea anti - ship drones. On land, large and slow drone against armour, with short range ATGM not useful. Both agree. On land drones do not have to be long range. Lines of contact are close. At sea, ships are far away to avoid becoming target. So need large drone wingspan fuel to reach. But means slow and easy target if too close to ship. Drone can carry own weight plus payload. But if separate payload, with own body and engine and avionic and sensor, then can be only small warhead. Not effective against ship either.

But separate missile must have own avionics. Most expensive part of missile. This gets destroyed every time anyway. And we save body of UCAV. BUT have to make two avionic. So cost more. Plus, when UCAV turn around, it exposes engine to heat sensor and become target.

It comes down to survivability... if there is a good chance of the drone surviving then it makes sense to make it sophisticated and fast and powerful and loaded with weapons instead of the drone itself being a weapon.

Think of it in terms of getting bombs on target.

A drone is a useful alternative because modern bombers and modern precision guided bombs are expensive... a cheap simple drone makes sense, but if you already have those expensive bombers and with a modification are then able to use cheap dumb bombs with an accuracy and precision good enough so instead of dropping million dollar bombs you are dropping thousand dollar bombs then suddenly it becomes much harder to justify using a drone for that job because that bomber can carry self defence equipment and self defence weapons and would be much harder to deal with than a simple drone.

Obviously you could argue that having fighters protect the bomber means more cost but cost is justified if it means actually reaching and destroying the target.

For Iran a mini sub might be the best solution... with low speed very quiet propellers they could be towed out to sea by fishing vessels and then released to sail back towards any attacking western ships from behind... using lots of batteries you could make it so that it can be very quiet and sneak up on targets from behind, or position themselves in the path of enemy ships and dive down to sit just below their hull and when the ship comes over top a MAD sensor could make it go boom...

Being a submarine you could put ten tons of explosive inside it easily... along with ten tons of batteries.... connect a power cable to the fishing boat to charge the batteries to full charge while towing it out to position and then at the time it is released transmit the general positions they need to be at to be effective... they could release a small buoy with an antenna to receive targeting instructions... they could carry dozens of them including fake ones that are released with a delay so they pop up hours after the mini sub has gone by... the sub itself could operate along the sea floor to make it hard to detect but with sonar to detect vessels and aircraft and ships looking for it...


But separate missile must have own avionics. Most expensive part of missile.

The problem there is that each target requires its own individual bomber platform to deal with it... which might sound cheaper but would likely end up being much more expensive.

Of course cost is not the only factor... a weapon that costs $50 is no good if it does not destroy the target... if they can develop 152mm ammo that can reach targets 170km away then what could they achieve with a 203mm calibre round. Shore based gun artillery is interesting... and so would shore based rocket artillery... especially if it can be used against ground targets too...
nomadski

Agree. It is more a case of what you have. But if you don't have and are making. Then everything else being equal. Then you need a variety of systems. That exploit and rely on different methods of attack and guidance. From manual to automated to using different sensors. So that if enemy overcomes one system. Say knows how to jam Radar, then you have X and Y  and  Z. But not good idea to have duplicates. Two systems to attack same target that rely on same method.

Now this is more like it. For war situation. Stand off range should be big. Bigger than many SAM, I think. Then manouver out of the way. Keep UCAV on land, for recon or use against Rats.
nomadski

Looks like Iran making Turbofan for UCAV. Can fly at  60000 feet. Long endurance. So Iranians are heading to developing combat air to air UCAV , stealth fighter against F35 or F22 at high altitude. No place to escape for them.

I have always thought that, if we assume radio and optical communication to be secure enough to allow use of AA missiles in piloted jets. Then control of UCAV  in  air combats from ground, should be just as effective. With added advantages of cost and superior numbers. And no pilot lost in combat. So for cost of one F35, we build 100 combat UCAV........ Die F35 Die........... LOL.

Of course more advanced models, using internal inertial or starlight navigation and automated target detection and engagement without ground control will make ECM and others useless against them, in loiter mode.............
nomadski

When possible, UCAV 'S design and functions should be amalgamated. So that there are not too many different types. Leading to expensive and truncated system. The same drone can perform the function of surveillance and launching ATGW against armour, for example.

But having different types, may be necessary at times. A missile needed to destroy a Tank, may only need a warhead of 5 kg. And land army can launch at close ranges, of only a few kilometres. But a missile warhead to sink a ship, may need to be 100 or more kg. And ranges from shore, can be in the hundreds or more km.

In both these cases, different drones are needed. Against Tanks, a small disposable drone with electrical drive and low RCS. Is useful. With much longer range than present anti - Tank missiles.

For anti - Ship drones,  large and longer range drone is useful. Like Simorgh. But improvements can be made.  And of course body is composite. This drone carries the longest range cruise missile. The cruise is fired at maximum range. To give large UCAV, chance to avoid enemy fighters at sea. And this flies fast and programmed evasive terminal moves.

Using UCAV against ship may be more effective than submarines. Because enemy ship can move fast and change position. Difficult for submarine to catch. But UCAV, travels at 100 km / hr. Five Times as fast as Sub. Can catch ships at sea. But even UCAV at long range needs course correction. A ship can change position by 200 km. To New position. By the time UCAV  or cruise missile reaches it .

Two ways of doing it.  If avionic and micro-chip in short supply and  engine for props and pumps and gears cheap. Then let cruise guide the UCAV. Then discard it, and fly to target. UCAV body disposable. And at rear. Cruise mounted forward section.

The second way, if avionic and micro-chip not expensive or in short supply, but engine and body expensive. Then build UCAV, to return to base, after firing cruise anti- ship. Recover body. But build more avionic. Cruise mounted mid- section, under wings. Inside body.
nomadski 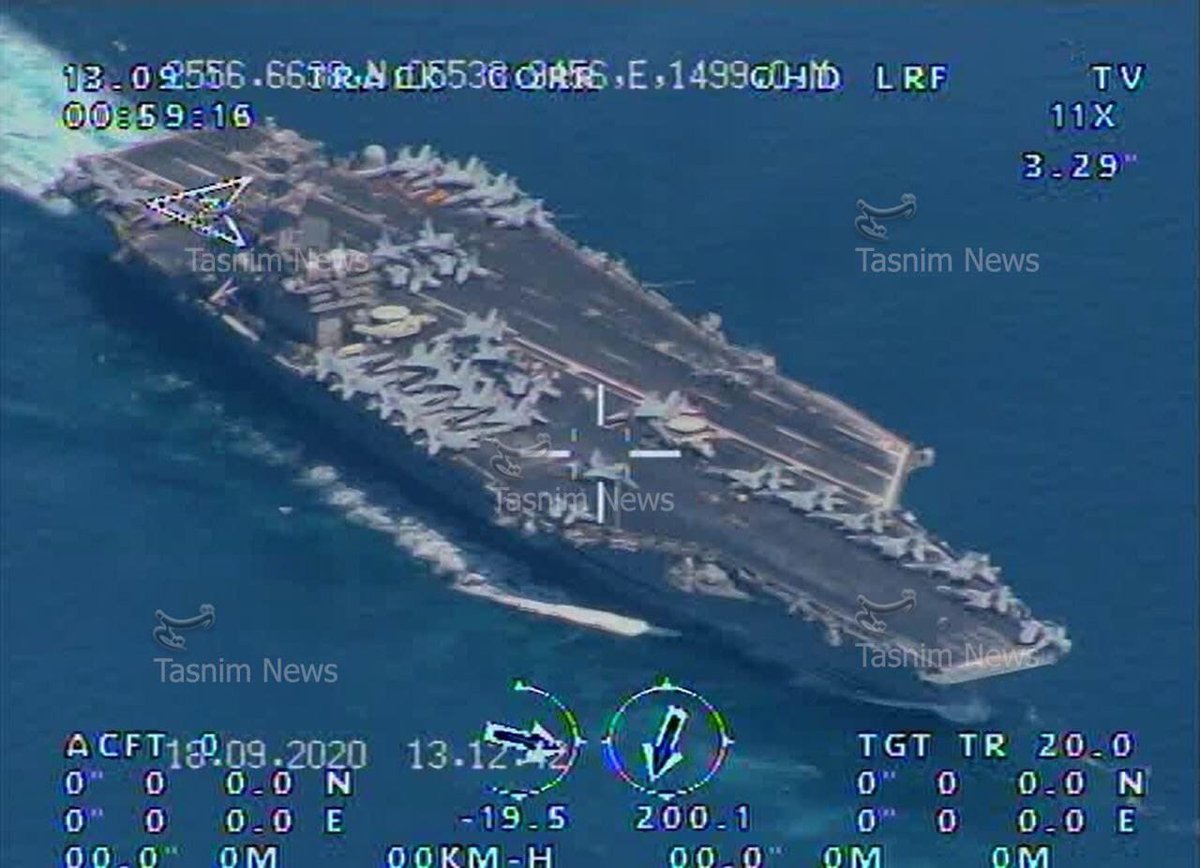 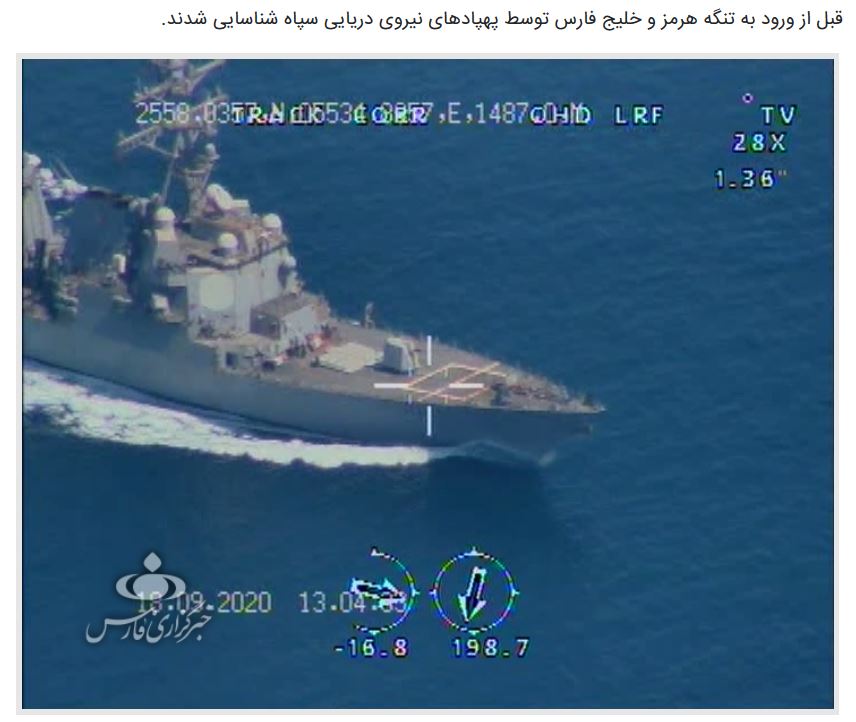 New IRAN UAV´s
https://colonelcassad.livejournal.com/6213631.html
New Iranian attack UAVs and kamikaze drones entering service with the Islamic Revolutionary Guard Corps. Photos taken in late September and early October 2020.
At the moment, Iran is confidently among the top 10 countries of developers and manufacturers of multifunctional UAVs, and also has an extensive practice of their use, primarily in Yemen.
Therefore, every few months Iran presents both modernized versions of existing UAVs (reconnaissance, strike, corrective, kamikaze), as well as various new products, both serial and promising, which are still in the process of development. 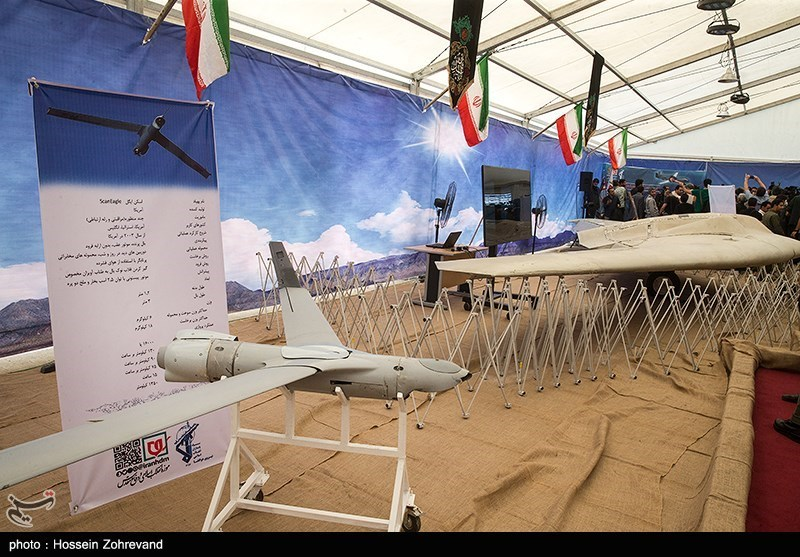 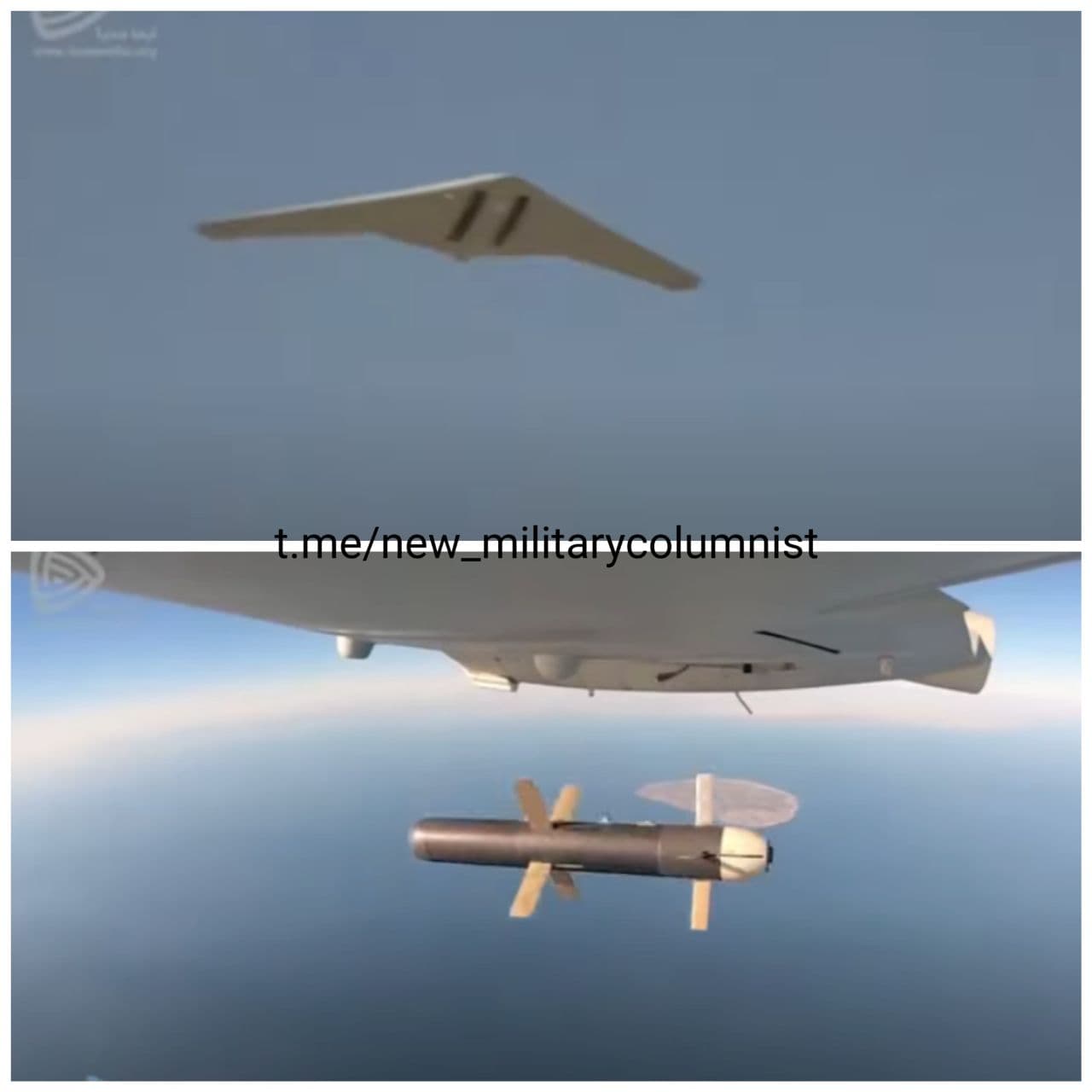 Iran test their copy of Spike missile, which they got in Syria, when it was shot down.

spriters
@neccamc1
·
12h
The heavy reconnaissance and strike UAV "Fotros", which can carry 6 missiles, has an effective flight range of up to 2000 km at an altitude of up to 25000 feet (7620 m) with a flight duration of up to 30 hours. For testing purposes, the device has already been seen in Syria.

They released one UAV with the name Gaza . 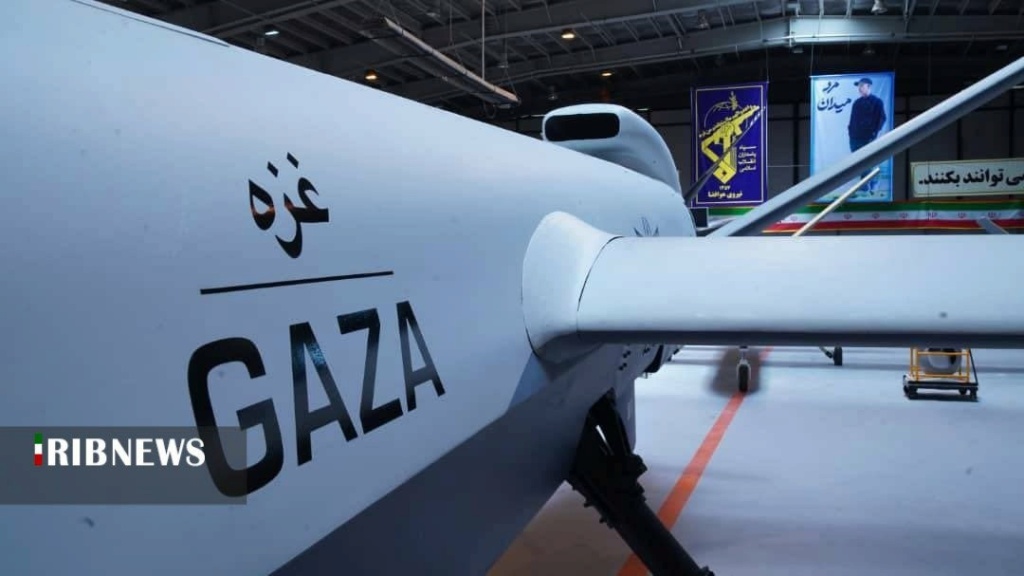 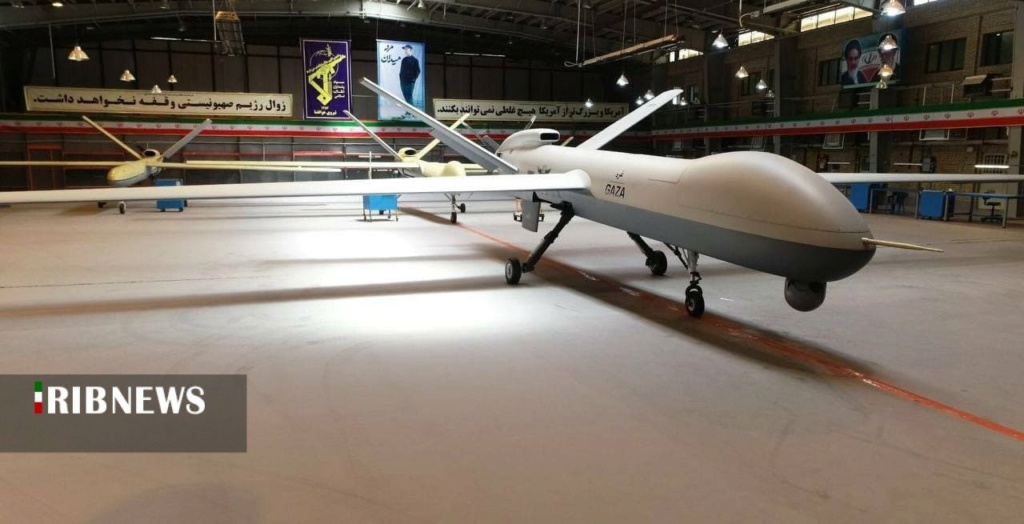 More on the Gaza. Looks a real threat!

Radio button The new reconnaissance and strike UAV Gaza is a further development of the Shahed-129 UAV with noticeably increased dimensions and characteristics.

It is stated that it can carry up to 13 guided bombs at a distance of more than 2000 km, as well as up to 500 kg of various reconnaissance and electronic equipment. The declared flight duration is up to 35 hours.

Obviously, such indicators were achieved due to the use of a more powerful engine, most likely a turboprop.

According to the commander of the Aerospace Forces of the IRGC, Brigadier General Amir-Ali Hajizade, the drone detects stealth aircraft with a radius of up to 500 kilometers. 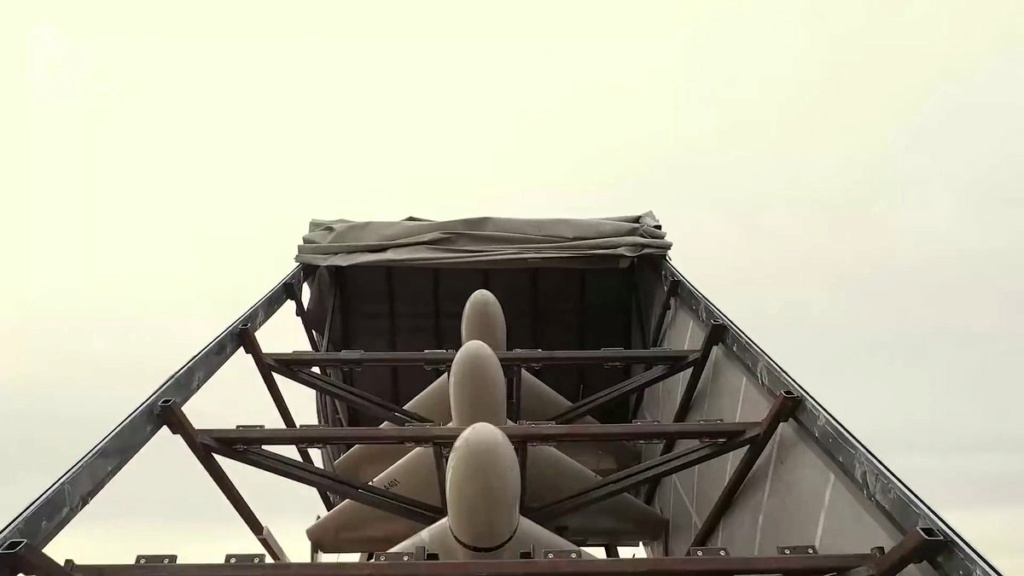 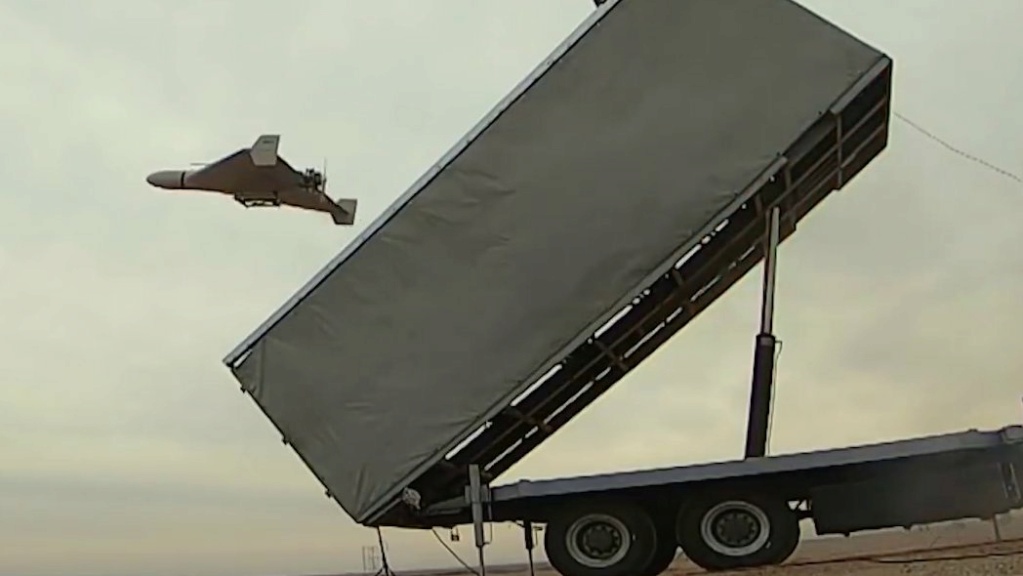 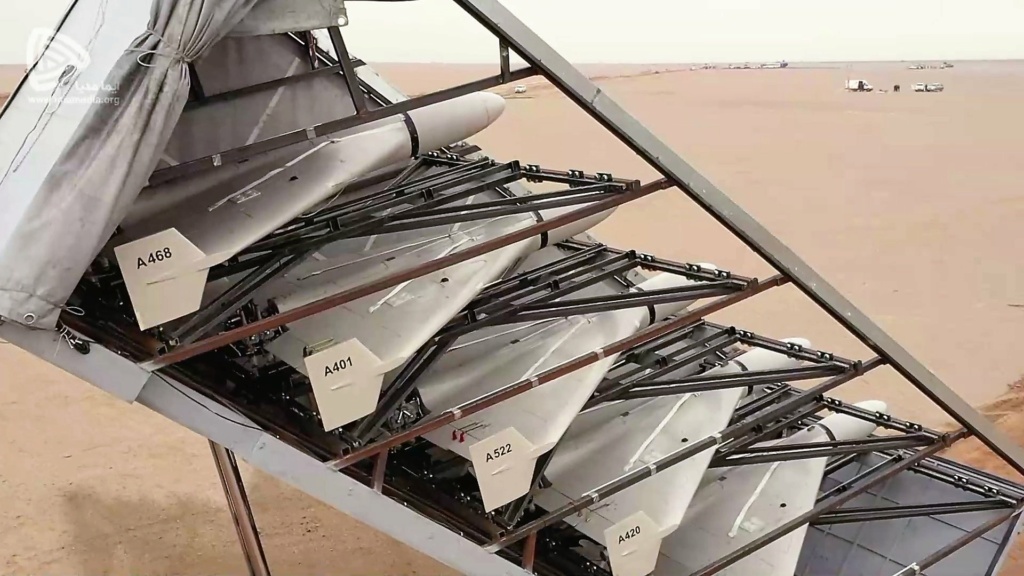 That drone launcher is quite clever... though solid rocket boosters would be expensive compared with perhaps a compressed air launcher, but I guess solid rocket fuel was simpler.

Many Russian drones use an elastic launcher, but found in very cold conditions it does not work very well...

This seems very clever because you can change the launch order as you please so you might have some long endurance drone first to go out and look around and when it finds a few targets then other drones with bombs could be launched to attack those targets, or suicide drones could be used that lack the excellent optics of the loiter drone and only have cheap simple cameras that could fly out to the loiter drone and then attack the targets and then the loitering drone can return home with its expensive powerful day and night cameras to be reused.

Having each drone ready to launch also means if one fails to launch or crashes a replacement is ready to be launched in its place.

Also for ground forces having one drone to deal with can focus your attention so a drone flying higher might not be noticed so while enemy ground forces are firing small arms at a low flying expendable drone a more expensive reusable model of the same drone with much better wide angle cameras and state of the art navigation and laser range finding could be watching for muzzle flashes and recording the positions of enemy troops... ready for an air strike or artillery strike...

I like it, though I would probably replace the solid rocket motor with a compressed air launcher arm built in to the truck and perhaps operating from a compressor attached to the trucks engine... it would work in any temperatures and be completely reusable... make it the full height of the trailer box with perhaps three sections so it extends three times the height of the trailer at full reach on launch...

For heavy payloads perhaps a smaller solid rocket booster to further assist the launch... but most of the time just compressed air. 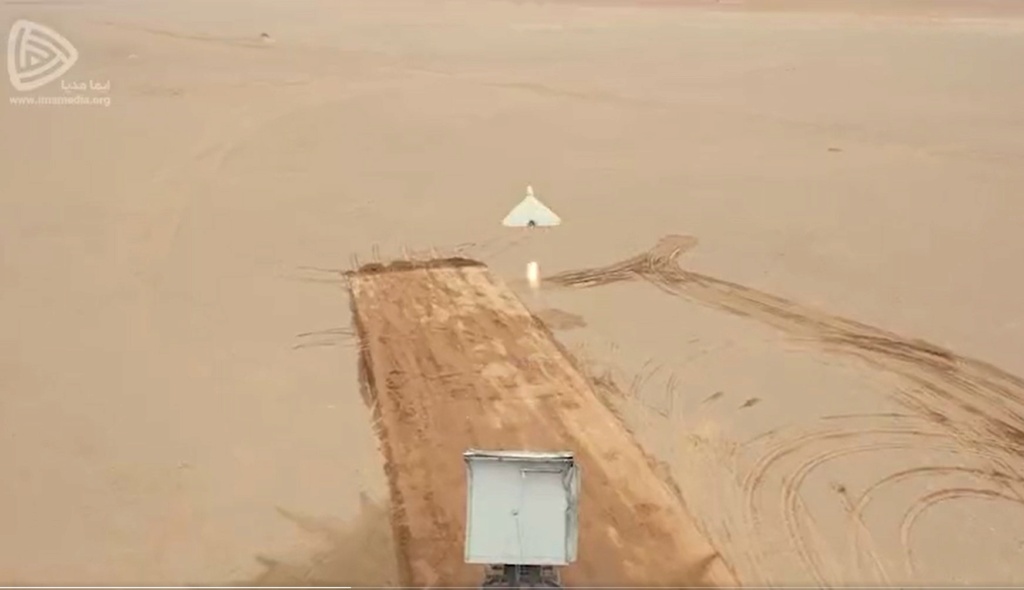 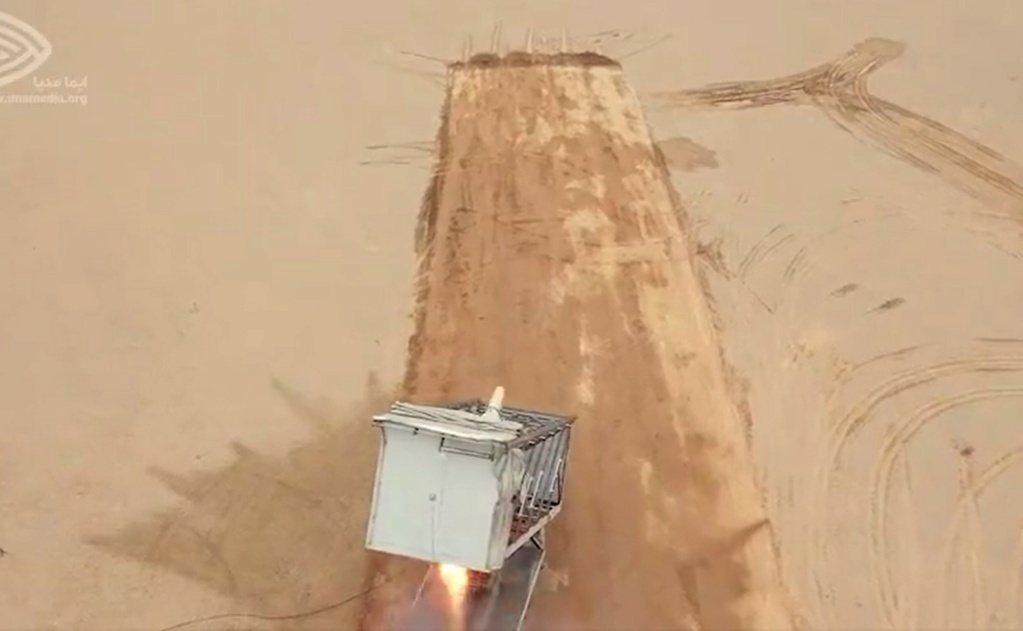 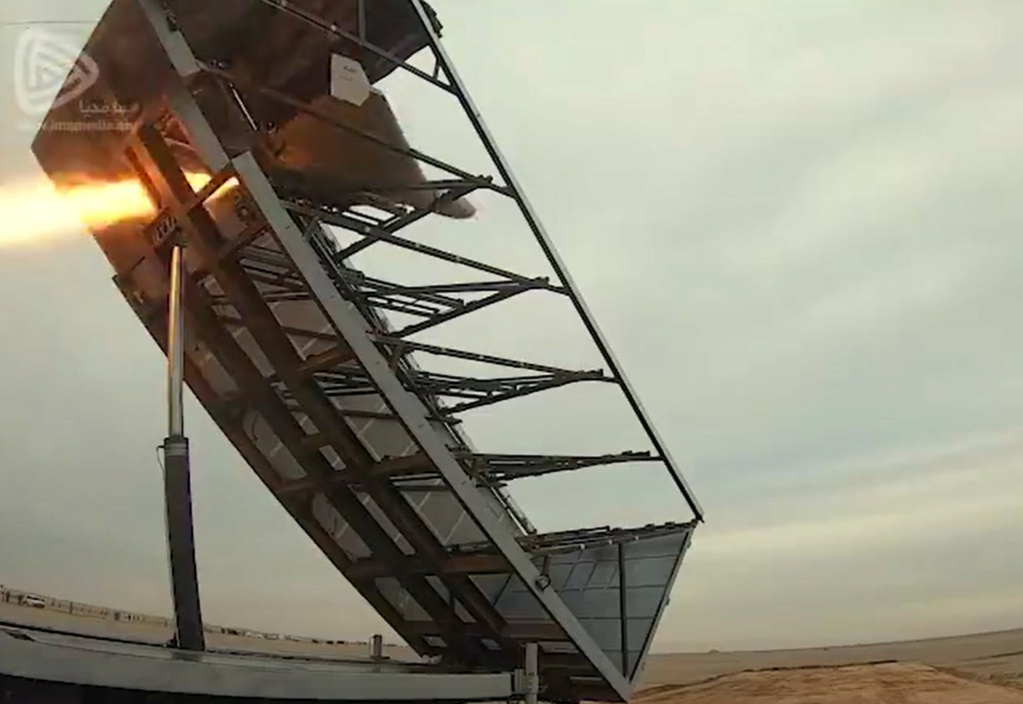