RPG-28 is not guided so decoys and Jammers wont do very much.

No APS system is perfect... they can certainly be targeted using accurate small arms fire, or simply overwhelmed.

Or how about a rocket propelled land mine...

RPG-28 is not guided so decoys and Jammers wont do very much.

No APS system is perfect... they can certainly be targeted using accurate small arms fire, or simply overwhelmed.

Or how about a rocket propelled land mine...

How about a MON-100 shaped charged mine for AT purposes?

How about a MON-100 shaped charged mine for AT purposes?

The MON-100 is not anti armour... it uses a shaped charge to keep its anti personel fragments in a tighter group so it is effective in the anti personel role out to greater distances.

the MON-300 also uses a shaped charge shape to focus anti personel fragments so they can be used as a super shotgun over great distances.too.

they do have mines with shaped charges designed to penetrate armour at standoff distances... the TM-83 for example is a 25cm diameter 25kg mine designed to penetrate an armour plate up to 400mm thick at distances up to 50m. the penetration is up to 80mm wide and can be used at a roadside to attack the sides of passing vehicles.
acatomic

Mindstorm wrote:
It seem that, not only KBM has not abandoned the goal to offer abroad mass production of the modernized Arena-E ,but has also significantly improved its defeating capability against the most modern AT elements (top attack included) and the adaptability to different platforms.


Link: New members are not allowed to post external links or emails for 7 days. Please contact the forum administrator for more information.

On the other side this choice very likely mean that the new generation of active protection systems now developed for perspective unified platforms of the "Kurganet" and "Armata" family will be not offered in an export model ,on the international market for a long time.


Was this version of Arena-E shown on DEFEXPO-2014?

Are there any photos from DEFEXPO-2014 of Arena-E? I've been looking everywhere and I just can't find any. 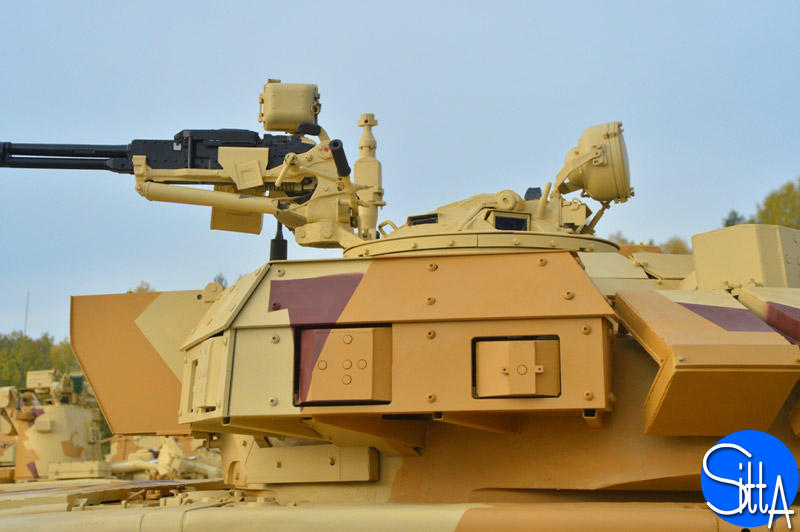 BTR 82A and modernized T72 Delivered Year to Date

Most likely no. Never saw a tank with Arena in the actual forces

There is a new version of Arena that has a much lower profile and I suspect rather better performance... the key will be price... the original was not cheap.

The upgraded T-72s are largely a stopgap measure that will have new all weather and night capable optics (ie thermals) and all the new bits and pieces that will allow useful day night and all weather training. It will also have new communications and battle field management systems that allow commands to be datalinked to each vehicle.

Other than that it will likely include the new gun and autoloader.
acatomic

What do you think, could Arena be mounted on the hull of BMPT-72?
Mike E

acatomic wrote:What do you think, could Arena be mounted on the hull of BMPT-72?

Probably, they could build a mount for it with ease. Can it right now? - I'm not sure.

It is designed to be added to an existing tank design so pretty much any tank not already fitted with APS can have ARENA-2 attached to it.
acatomic

It is designed to be added to an existing tank design so pretty much any tank not already fitted with APS can have ARENA-2 attached to it.

I was asking because I'm corious if intercept plate arrangement (one plate would have to give 90 degrees coverage) on a hull of BMPT would be enough to give full 360 protection.

From that new video there are four plates in each side piece with two firing forward and two firing sideways suggesting the bins at the rear likely fire backwards meaning a total of about 12 munitions with four covering the front, two to each of the sides leaving a suspected four to the rear.

They should each cover about 90 degrees but are launched up and direct their fragments down and forward into the ground so it is much safer for friendly infantry to operate nearby.

George1 wrote:Enhanced active protection "Arena" is marketed under the batch program of modernization of the T-72

"According to the information we have on these missiles, the Arena-M will undoubtedly be able to protect a tank from a TOW," the chief designer said.

"Over the past time, Army Commander-in-Chief Colonel-General Oleg Salyukov has visited the Machine-Building Design Bureau twice. We agreed to sharply intensify the work. Now the active protection complexes for T-72 and T-90 tanks are at the stage of preliminary trials," Kashin said.

According to the chief designer, the Machine-Building Design Bureau and Uralvagonzavod have agreed to mount the active protection system on T-72 and T-90 tanks.

"But now the developers of tanks have requested quite a different arrangement of the active protection system. The principles seem to be the same but in actual fact this is an absolutely new development. Moreover, the active protection system configuration was specified several times in the course of developing T-72 and T-90 tanks and the complex had to be remade anew," the chief designer said.

The need for active protection is demonstrated by the latest combat experience, he noted.

"The conflicts in the Middle East have shown that, first of all, it is impossible to do without tanks and, secondly, they can no longer be protected by traditional means, including reactive armor: when struck, the tanks burst into flames," the chief designer said.

The Arena is an active protection system intended to shield tanks from anti-tank grenades and anti-tank guided missiles. Specifically, the Arena system comprises a multifunctional radar of increased jamming resistance designed to detect and track anti-tank targets. Focused instant-effect protective ammunition is used for the aimed destruction of incoming targets. Protective ammunition is accommodated in silo sections arranged around the turret.

The TOW is an American heavy anti-tank system made operational in the US Army in 1970. Missiles are directed by an operator and guided by wire or by a radio channel in the latest modification. This system is one of the most wide-spread complexes in the world.
Share