The T-80s future in the Russian Army

limb wrote:So my claim that tank reverse speed is actually useful is correct and confirmed, despite what tacticool "genius" fanboys were saying before the war.


The interviewer shouyld've asked why there are so many captured BVMs(from the arctic division). The ukrainians have at least 10 captured ones vs a bit less T-72s.

Also I wonder why he considers the thermals to be inadequate.

Check original text, in Russian. I couldn't understand what slang that he used means in the context. I think that Sosna U has french second generation matrices, but I'm not entirely sure.
caveat emptor

As for, why the tanks were abandoned, probably, because the loss of fuel or some mechanical breakdown. Most of the tanks and other equipment didn't show any battle damage.
Isos

That's weired the strategy was to removed t-80 from service and use only t-72 variants and t-14.

T-80 proved to be far superior.

I agree reverse speed is critical and the t-72 will need to get a better gearbox to allow at least 14km/h like t-80.

Arena will also need to be bought in huge quantity.

Optics are old IMO and they will need to upgrade them.

Communications seems to have been not that much used in fear of letting nato get access to them and against ukraine they will be good with civilian radios since they have a huge tactical advantage.
caveat emptor

I was looking to see if ЕСУ ТЗ automatic fire control system was used, but he denied to answer. It should act as an umbrella system for whole army and, in theory, it should greatly shorten time between target acquisition and engagement.

The T-80 is considered to be a foreign tank, when the Ukraine sold lots of T-80 tanks to Pakistan and Russia objected they refused to supply guns for the sale to avoid upseting India and in response the Ukraine stopped supplying spare engine parts for the T-80UD in Russian service.

The engines were only made in the Ukraine which left Russia with the gas turbine version in service which drinks more than Boris Yeltsen.

Conceptually the T-64 and the upgraded T-80 were the high quality but also expensive tanks, while the T-72 got stuff as it became affordable like laser range finders and improved armour types.

The autoloader on the T-80 series carries more ammo... 28 rounds vs the 22 rounds of the T-72/T-90, and the design is different in that the propellent stubs are stored vertically in the T-64/80 family in their layer of the autoloader, while T-72/90 the ammo is all horizontal... and covered by a layer of armour plate inside so a turret penetration wont shower exposed propellent stubs with sparks and burning material that would set it off.

Regarding the thermals, I seem to remember the Sosna-U sights were the gunners sights and were not available to the commander... sounds like this guy is used to using better thermals on another tank... perhaps he has tested thermals on the T-14?


That's weired the strategy was to removed t-80 from service and use only t-72 variants and t-14.

The forces using upgraded T-72s were not that long ago using T-55s...

The myth of the T-80 being "Ukrainian" needs to die, It was derived from the T-64, but only the turrets of the early T-80 ever came from Kharkov, The T-80U is fully Russian, designed in Leningrad and made in Omsk.

The-thing-next-door wrote:The myth of the T-80 being "Ukrainian" needs to die, It was derived from the T-64, but only the turrets of the early T-80 ever came from Kharkov, The T-80U is fully Russian, designed in Leningrad and made in Omsk.

Well it is soviet. Like plenty of hardware they were made ftom parts coming from russian and ukrainian factories which made big issues for Russia after 1991. Just see ship's engines. They still have issues because of that after 30 years...

There was no distinction btw Russia and Ukraine.

However you can see how Russia managed to keep the t-80 and upgrade it while Ukraine totally failed with its t-84.

The-thing-next-door wrote:The myth of the T-80 being "Ukrainian" needs to die, It was derived from the T-64, but only the turrets of the early T-80 ever came from Kharkov, The T-80U is fully Russian, designed in Leningrad and made in Omsk.

Exactly, tank is Russian, as is gas turbine. One problem  that is real is that it is a gas guzzler which makes operating it pretty expensive.
@Isos T-80UD variant has Ukrainian diesel engine.

Many of the parts that made up the T-80 came from Ukraine, and the big upgrade of the new more powerful diesel engine was based in the Ukraine...

It was a Soviet tank but to keep it running they needed the cooperation of the Ukraine and didn't get it.

The Utes HMG was made in the Ukraine and has been replaced by Kord in Russian service.... not much wrong with Utes though Kord is better.

The Russians could make Utes HMGs but they choose to continue forward making only Russian weapons with parts and support centred in Russia.

Antonov was Russian too, but the plans and Plants etc were in the Ukraine when the music stopped and so they are dropping those too.

The T-80 is good for Navy units and also for units in extreme cold regions... with such a situation there is no reason why a gas turbine engine could not be adapted for T-14s and also Kurganets type vehicles for use in such roles.

The BMMP the Navy was planning would have a gas turbine and a diesel engine... where the diesel is used on land and the gas turbine used on the water... presumably running water jets more efficiently than a diesel engine could...

Seems to me that they need to upgrade the armour and equipment of their Naval Infantry forces.... those two 40K helicopter landing ships can't come too soon... likely new helicopters and new land vehicles too including all new optics and communication and the fact that they are talking about one helicopter carrier carrying troops and armour and of course fuel and food and water and ammo and weapons as well as helicopters and landing boats and landing hovercraft, the other vessel was reportedly going to be optimised for drones and helicopters which suggests an enormous expansion of the use of drones is anticipated... land, sea surface, air and underwater drones presumably.

The plan to save money not upgrading older stuff to use on newer stuff is not a good idea and I have mentioned in the past that putting newer stuff on the in service older stuff is a great way to get it into mass production and get field experience with it so bugs and problems can be ironed out but also so the makers can earn a living from their products which can fund upgrades and improvements.

The Moskva is a huge ship so keeping S-300F and OSA on board when there are other much newer and much more capable systems they could have put on board is a false saving of money.... obviously easier to say now with hind sight but these are weapons of war and a big ship that can defend itself is not an asset.

It sounds like its large radar arrays were useful enough...

Older tanks equipped with older optics and systems will also struggle but then tactics also come in to it too... at least their guns are powerful enough to be effective against any potential enemy target... not like the Germans going into the Soviet Union with 50mm tank guns and 75mm short barreled guns.

Any word on a BVM like upgrade to the t-80U?
Podlodka77

The Ministry of Defense of the Russian Federation, within the framework of the state defense order, received a batch of T-80BVM tanks ahead of schedule 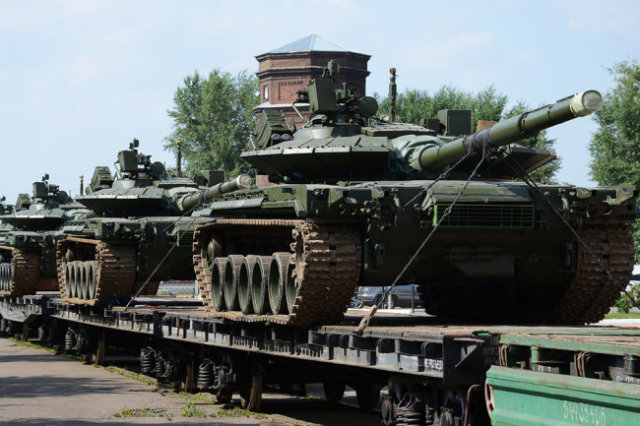 MOSCOW, 30 September. /TASS/. A batch of T-80BVM tanks was delivered ahead of schedule to the Ministry of Defense of the Russian Federation by the Omsk Transport Engineering Plant (Omsktransmash) as part of the state defense order. This was reported on Friday in the press service of the enterprise.
The Omsk Transport Engineering Plant (part of JSC Concern Uralvagonzavod, part of the state corporation Rostec) handed over to the Ministry of Defense another batch of T-80BVM tanks as part of the execution of the state defense order. The company fulfills all obligations to the customer ahead of schedule. The updated combat vehicles have passed the necessary tests with a positive result, and in the near future they will be delivered to the military units of the Russian army.

It is noted that before being sent to the cars, they put letters from the children of the plant employees with drawings for military personnel.

The T-80BVM is an upgraded version of the T-80BV. The 125-mm cannon was improved on the machine, the gas turbine engine was improved - its power increased to 1,250 hp. With. In addition, the tank is equipped with a multi-channel gunner's sight, a driver's observation device and an armament stabilizer. The armor is reinforced with anti-cumulative lattice screens, as well as a complex of modular dynamic protection. Deliveries of T-80BVM to Russian troops began in 2019.