You are not connected. Please login or register
+3
TR1
gloriousfatherland
Pervius
7 posters

When the United States had its Civil War and the States tried getting Democracy Russia sent it's Atlantic and Pacific Naval Fleets to the Union North's ports.

Did the Russian military ever fire a shot or join the Union Army to fight America's Confederacy?

Did any Russian military die in the US Civil War while they were in the United States?
gloriousfatherland

hmm, realy a good topic to discuss....one which i dont know much about
TR1

Pervius wrote:When the United States had its Civil War and the States tried getting Democracy Russia sent it's Atlantic and Pacific Naval Fleets to the Union North's ports.

Did the Russian military ever fire a shot or join the Union Army to fight America's Confederacy?

Did any Russian military die in the US Civil War while they were in the United States?

A pretty interesting subject, there are quite a few academic pieces on it in English around the web.
BTRfan

This greatly angered the Rothschild/London banking/imperialist cartel that owned the British Empire and was one of the reasons why the British were so keen to support the Bolsheviks with money, weapons, etc, in 1919.


I have a lot of original documents from 1919-1921 about the Bolshevik revolution, from the British Foreign Office, the Home Office, the US State Department, excerpts and reprintings of Pravda, Izvestia, etc, and I have a working theory at the so-called "Allied Expedition" actually helped the Bolsheviks by fighting the White Army, but I have been unable to locate hard/concrete evidence. I have a huge amount of circumstantial evidence (everywhere the Allied forces were deployed the White Army had major set-backs, which seems odd and begs the question "what were the Allied forces doing if everywhere they went the White Army experienced major problems") but I have not been able to locate a smoking gun such as an American document where a general writes, "we were ordered to attack the flank of a White Army division to open the way for a Bolshevik advance."
BTRfan

These are my two main documents on the Bolshevik Revolution, original copies. 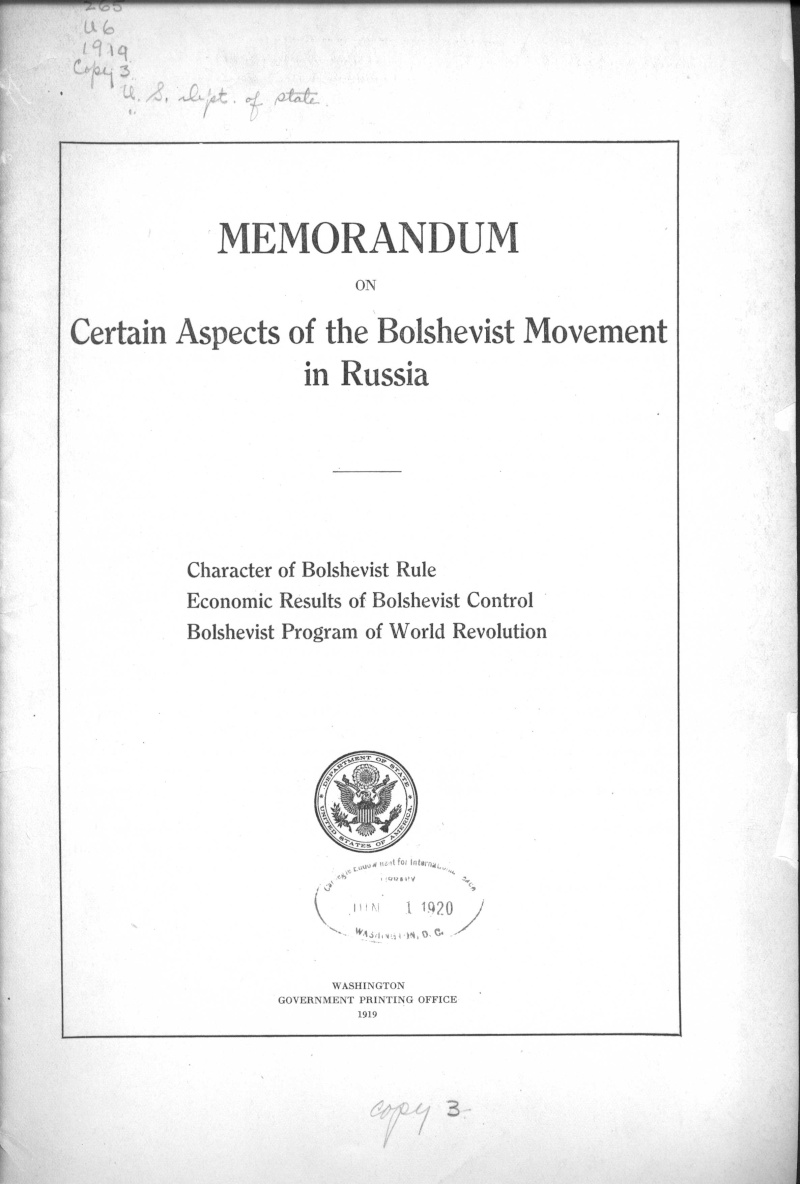 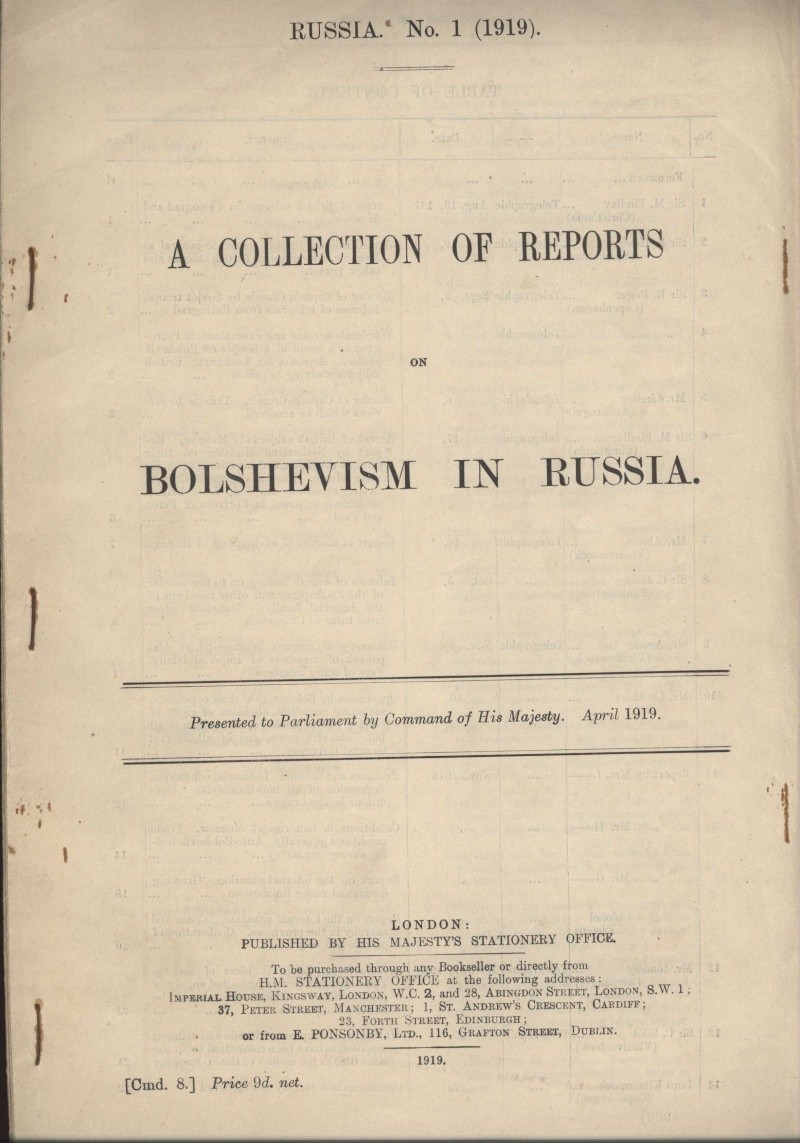 April 2011 marks the 150th anniversary of the U.S. Civil War, which began when Confederate forces opened fire upon Fort Sumter in Charleston, South Carolina. The following essay by Webster Tarpley, tells about the largely untold alliance between President Abraham Lincoln and Russian Tsar Alexander II, which by many accounts was key to the North winning the U.S. Civil War, sealing the defeat of the British strategic design.


The Union and Russia

The Russian-British rivalry was of course the central antagonism of European history after the Napoleonic era, and the Russian attitude towards London coincided with the traditional American resentment against the former colonial power. Benjamin Platt Thomas’s older study shows that the US-Russian convergence became decisive during the Crimean War; while Britain, France and the Ottoman Empire attacked Russia, the United States was ostentatiously friendly to the court of St. Petersburg. He depicts Russian minister to Washington Éduard de Stoeckl as a diplomat “whose sole aim was to nurture the chronic anti-British feeling in the United States.” (Thomas 111) According to Thomas, Stoeckl succeeded so well that there was even a perceptible chance that the United States might enter the Crimean War on the Russian side. The US press and public were all on the side of Russia, and hostile to the Anglo-French, to the chagrin of the erratic US President Pierce (who had been close to Admiralty agent Giuseppe Mazzini’s pro-British Young America organization) and the doughface politician James Buchanan. The latter, at that time US envoy to London, embraced the British view of the Tsar as “the Despot.” (Thomas 117) Thomas finds that “the Crimean War undoubtedly proved the wisdom of Russia’s policy of cultivating American friendship, and in fact, drew the two nations closer together.” (Thomas 120) But Thomas glosses over some of the more important US-UK frictions during this phase, which included British army recruiting in the US, and the ejection of the British ambassador as persona non grata. (Thomas 120)

Turning to the conflict of 1861-65, Thomas points out that “in the first two years of the war, when its outcome was still highly uncertain, the attitude of Russia was a potent factor in preventing Great Britain and France from adopting a policy of aggressive intervention.” (Thomas 129) He shows that the proposed British-French interference promoted by Lord Russell, the Foreign Secretary, in October 1862 was “deterred at this time mainly” by the Russian attitude, and cites Russell’s note to Palmerston concluding that Britain “ought not to move at present without Russia.” [5] (Thomas 132)

The critical importance of Russian help in deterring the British and Napoleon III as well is borne out by a closer analysis. As early as 1861, Russia alerted the Lincoln government to the machinations of Napoleon III, who was already scheming to promote a joint UK-France-Russia intervention in favor of the Confederacy. [6] As Henry Adams, the son and private secretary of US Ambassador to London Charles Francis Adams, sums up the strategic situation during Lee’s first invasion of Maryland, on the eve of the Battle of Antietam: These were the terms of this singular problem as they presented themselves to the student of diplomacy in 1862: Palmerston, on September 14, under the impression that the President was about to be driven from Washington and the Army of the Potomac dispersed, suggested to Russell that in such a case, intervention might be feasible. Russell instantly answered that, in any case, he wanted to intervene and should call a Cabinet for the purpose. Palmerston hesitated; Russell insisted….” [7]

On September 22, 1862, Lincoln used the Confederate repulse at Antietam to issue a warning that slavery would be abolished in areas still engaged in rebellion against the United States on January 1, 1863. The Russian Tsar Alexander II had liberated the 23 million serfs of the Russian Empire in 1861, so this underlined the nature of the US-Russian convergence as a force for human freedom. This imminent Emancipation Proclamation was also an important political factor in slowing Anglo-French meddling, but it would not have been decisive by itself. The British cabinet, as Seward had predicted, regarded emancipation as an act of desperation. The London Times accused Lincoln in lurid and racist terms of wanting to provoke a slave rebellion and a race war,"]

In the civil war russian ships were based at San Francisco and New York (Boston?) and prevented an interference by british and french Forces on the side of the south.
GarryB