Fajr was a 50kg imagery Sat. with on-board Gas propellants which gives it the capability to change orbits without the carrier and thus more endurance.
The Fajr sat was put in 400km orbit of the earth and has a life span of 1.5 years

Last edited by ShahryarHedayatiSHBA on Sat Feb 28, 2015 7:06 am; edited 1 time in total
Solncepek


It seems Iran is going to launch a satellite into orbit soon, but the question is when.

As I noted recently, Defense Minister Hossein Dehghan told the Majlis that Iran would conduct a space launch during the festivities to mark Iran’s revolution, which should run from 1-11 February.

Other Iranian officials, however, have suggested that Iran would merely show off new toys during the festivities, holding off the launch until after Nowruz aka the Iranian new year (March 20).

On 3 February, National Space Day, Iran’s President marked a number of achievements and showed off a new 50 kilogram satellite.  That mass is interesting.

Next up is, according , the display of a Simorgh tomorrow on 11 February. We’ve seen the Simorgh before —  most recently in August — but perhaps we might be surprised.  The Simorgh is designed to put a small payload, usually listed as 60 kg, in a 500 km orbit.  In other words, perfect to launch Friendship.

So when will the thing actually launch?

While the most recent statement indicates a launch sometime after Nowruz, Iran has now issued a pair of Notices to Airmen (NOTAMs) for the Imam Khomeini Space Center near Semnan for 16-18 February.  (Iran is also maintaining a NOTAM over the pads near Shahroud, but these don’t look like a launch.)

Will Iran actually launch during this window?  Who knows!
But, on balance, it looks like Iran is moving toward using the Simorgh to launch a friendship satellite, possibly between 16-18 February.
Solncepek

Iran is preparing to launch a rocket from the Imam Khomeini Space Center. We anticipate that Iran will attempt the launch between 1-2 March 2016. 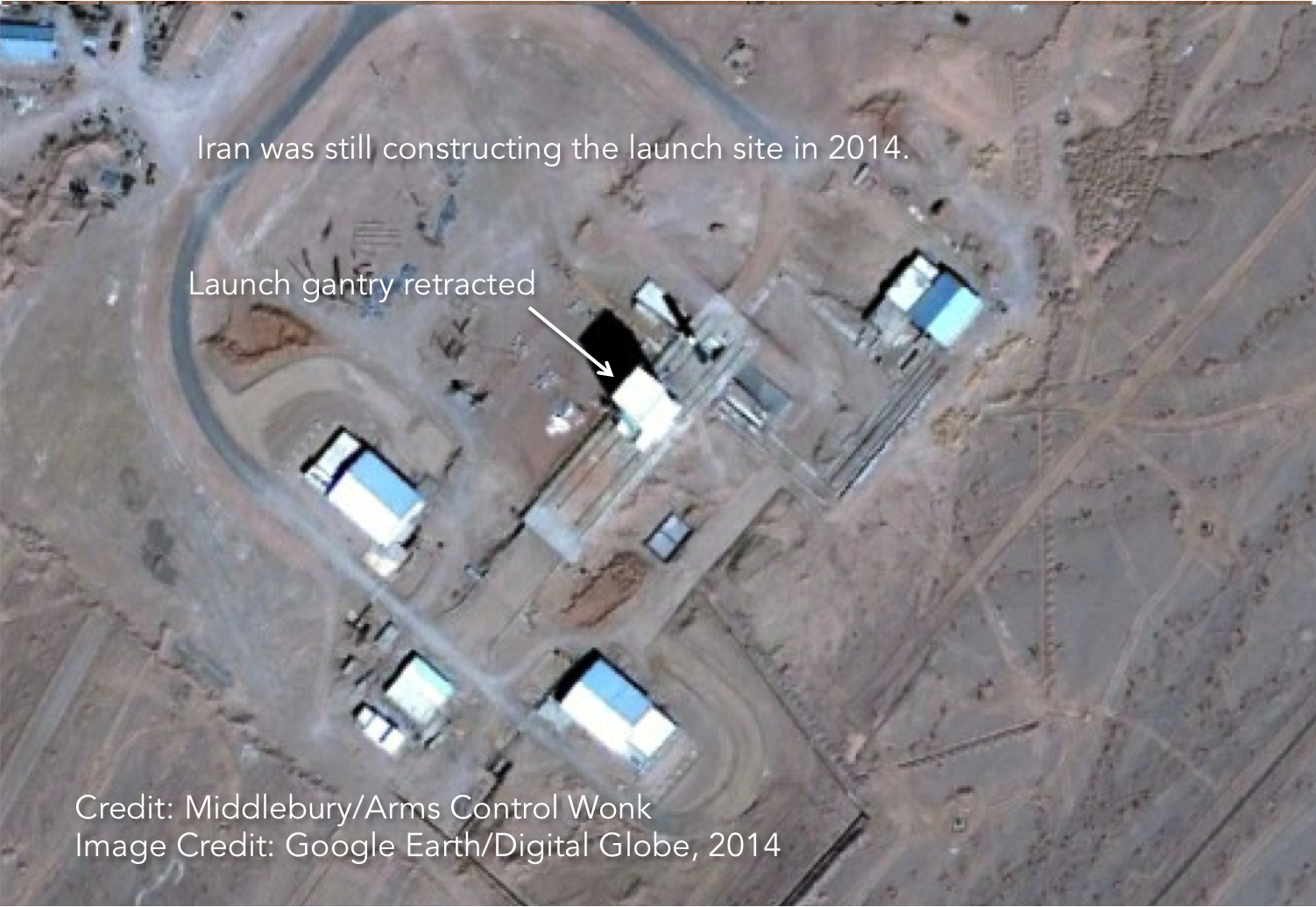 Launch Preparations? All I see are buildings. But those buildings tell a story. First, the new image reveals that Iran has completed construction at the site, which we call Launch Complex 2. That’s news. Second, the launch gantry, which moves along rails, is now positioned over the launch bucket. That suggests Iran is stacking up and fueling the rocket inside. (If you want to see a similar launch operation, this video from India is a good model.) Third, there are a lot of vehicles on site. That means personnel are there working. This is pretty much what preparing to launch looks like.

Why 1-2 March? Iran has issued a Notice to Airmen (NOTAM) closing the airspace over the launch pad for 1-2 March. Iran typically issues a NOTAM before a launch, although a previous NOTAM for 16-18 February expired with no launch and Iranian officials floated different launch dates. And, of course, space launches can be delayed. Still, here is the NOTAM:

What kind of rocket will Iran use? Iranian officials have indicated that Iran will launch a Simorgh, which has a first stage similar to the one in the rocket North Korea recently launched, the Taepodong-2. Iran has launched its smaller rocket at a different launch pad at the Imam Khomeini Space Center. Last year, President Rouhani gave a press conference in front of a Simorgh. Iran displayed a mockup of the Simorgh launcher on 11 February during celebrations to mark the Iranian revolution. We’re going to release a model of the rocket soon.
What kind of satellite? President Rouhani celebrated National Space Day on 3 February by unveiling a satellite called Friendship Testing Satellite. The Simorgh is designed to put a 100 kg payload into a 500 km orbit.

Friendship? Are you sure this isn’t an ICBM? The first stage of the Simorgh is very similar to North Korea’s Taepodong-2. There are differences, but the Simorgh demonstrates two essential technologies for an ICBM — clustered engines and staging. That said, the Simorgh itself is not an ICBM. What the US intelligence community says is: “This technology could be used for an ICBM-class vehicle.”
Wasn’t there some false alarm about a rocket at Semnan before? Yep, Israeli TV did a bad job of analyzing a satellite image in January 2015. We wrote a post called “It’s Not A Rocket.” This is different: The launch site is finished, the gantry is in the proper location, and there are vehicles on site. Also, Iranian officials have said they will conduct a launch and issued a NOTAM closing the airspace for 1-2 March. Something might still cause Iran to delay or scrub the launch, but this is different. 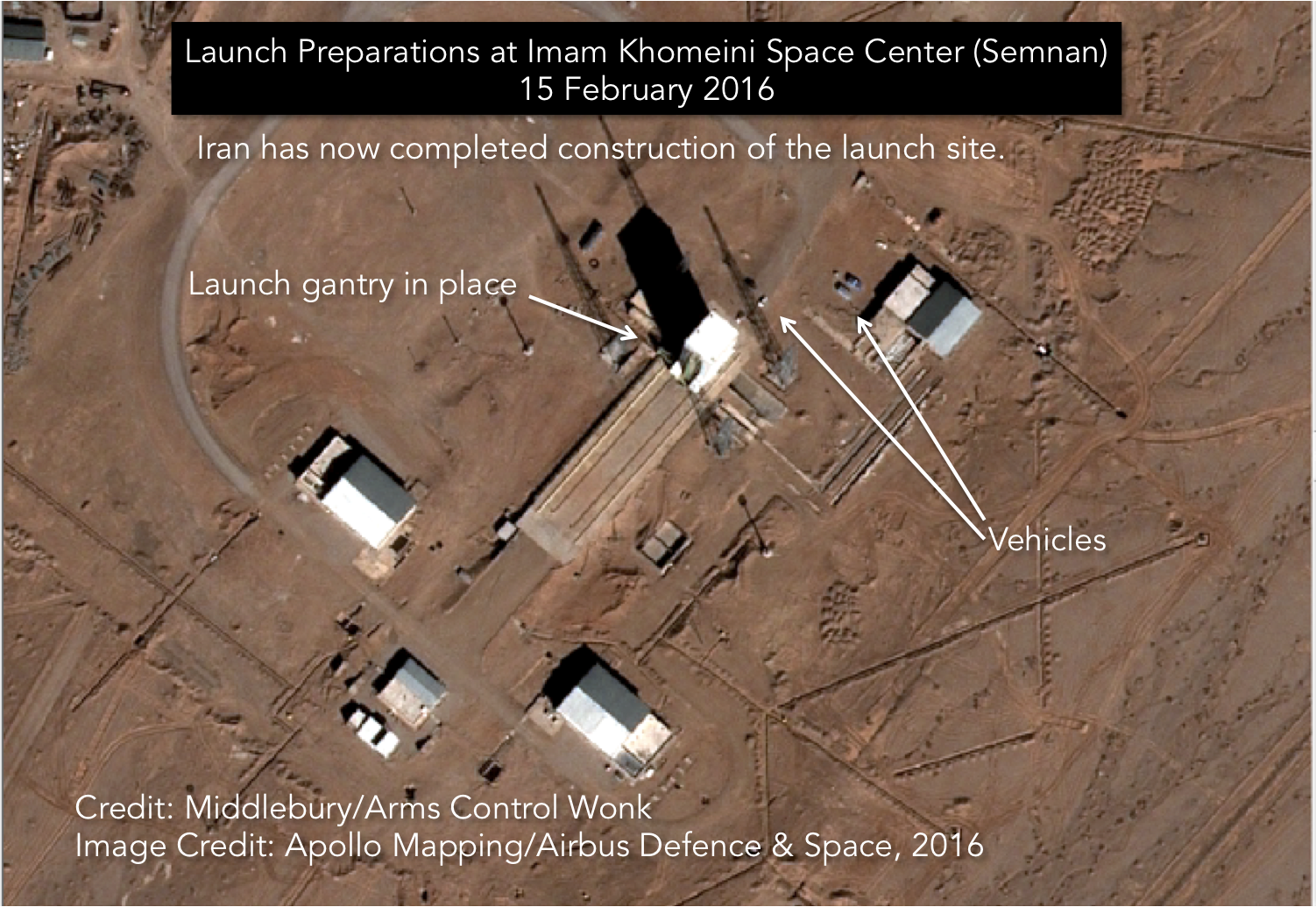 
Mahmoud Vaezi, the Iranian Minister for Communications and Information Technology, announced on May 8, 2017, that two Iranian-made satellites are almost ready for launch.

“Now, we have two satellites ready to be launched, one being Amir Kabir sensing satellite and the other being Nahid telecommunication satellite,” said Minister Vaezi to Iranian news agency ISNA.

Minister Vaezi said that work on the two satellites was “over 97%” done and that their launch should be expected in the coming few months.

Nahid-2 (Nahid is Farsi for Venus) is the successor to the Nahid-1 satellite that was expected to have been launched by March 2017, but as yet is still awaiting a launch date.

Nahid-1 was originally scheduled to be launched in 2012, and has folding solar panels. Nahid-1 is designed and jointly manufactured by the Elm-O-Sanat University Metro Station in Tehran and the Iranian Space Agency’s Aerospace Research Institute. Nahid-1 will weigh about 55 kilograms and operate in the Ku-band.

Nahid-2 will weigh approximately 100 kilograms and will be 64 by 64 centimetres in size, and is supposed to be placed in geosynchronous orbit (approximately 36,000 kilometres altitude) in 2018. SpaceWatch Middle East reported in March 2017 that the Iran Space Agency has applied for five orbital slots in that orbit with the International Telecommunications Union (ITU) in Geneva, Switzerland.

The Amir Kabir-1, also known as AUTSAT-1, is a remote sensing satellite that weighs 70-80kg with a resolution of about 80 metres, and is designed to provide post-disaster surveillance (such as earthquakes) and agricultural applications. Amir Kabir-1 is designed by the Amir-Kabir University of Technology, and is being manufactured by the university and by a company called Iran Aerospace Industries Organisation.
http://en.abna24.com/news/iran/iran-to-launch-nahid-1-and-payam-e-amir-kabir-satellite_832750.html

I suspect part of the bitching from the US and Israel about Irans rocket programme is their fear that Iran might get remote sensing satellites up and find out some of the crap both countries are up to in the region...
yavar

I thought I post this today, before Iran sattelite launch by this Friday. Because Iran sattelite boys can now read this and absorb info, instead of after emotional launch or otherwise by Friday. The main point is about liquid engines and number and size of them. The bigger a liquid engine, the more the thrust. And fewer components. And weight. Leading to greater reliability. However bigger engines also seem to develop problems of instability in chamber. Smaller engines, have less thrust and more components, leading to greater weight. But less component reliability. Because of greater number of components. But they do not develop chamber pressure instability. So there seems to be a sweet spot. An ideal size and number of liquid engines. Another limiting factor for big number of smaller liquid engines, seems to be the synchronising of operation of large number of engines. The Yanks went for large engines for space programme. After solving chamber pressure problems by changing convergence angle of nozzles. And increasing fuel injection pressures by pumps, to stop blow backs. The Russians went for larger number of smaller Engines. I think the Russian route is cheaper. And providing reliability of components, and unified synchronous operation of Engines. Then it is better route to take. But that is what I have seen on TV. And reason myself.

NB :  Make sure that any exposed pipes in Engine area, are not frozen in winter temperatures. Defrost first. Remove water condensate from internal electrical . Hot air.

They said that acceleration slowed down. They were 10 seconds short of injecting into orbit. Then signal was lost. I think, if problem was shortage of fuel in second stage, that engines could cut off early. Acceleration slows down and engines shut down. But it does not explain why telemetry signal was lost, soon after. It looks more like, the Engines developed a fault. A crack in Engine nozzles or pipes. Engines loose power. A fire then destroying telemetry soon after.

Looking at Engine nozzles of second stage, to me it looks like, they are very hot and not cooled. By fuel circulating around nozzles to cool down. Like space - x photos. So to my mind some changes can be made now :

( 1)  The body of Rocket can be made of composites. This will reduce weight and allow for more fuel for second stage.

( 2) The Engine nozzles of second stage can be cooled. Other pipes protected from cold of space. To stop thermal fractures.

A fantastic effort. Well done to all staff. To do this on 2 million Euro budget.!

This nozzle looks very different in heat to zafar thrusters in vacuum.

yeah, shame for sure but hopefully they've gleaned enough info to understand what went wrong. back on the bike and try again

If it was easy then everyone would be doing it... just got to keep on keeping on.
Sponsored content