Il-112 is coming along nicely. The TV channel "Star" posted on the resource "Youtube" uninteresting video, which in all its glory can be seen in the assembly terminated by PJSC "Voronezh Aircraft Manufacturing Company" first flying prototype of the light military transport aircraft Il-112V, as well as details of its construction.

As reported in its press release, the United Engine-Building Corporation (part of the Rostekh State Corporation), the company supplied two experienced powerplants TV7-117ST to Voronezh PJSC "VASO" (included in the UAC) for equipping the first prototype of the Russian light military- Transport aircraft IL-112V. The engines were delivered on time and in accordance with the obligations under the contract between JSC "ODK" and OJSC "IL".

Work on the Il-112V project is conducted in accordance with the state contract for the development of experimental aircraft for the creation of an airplane, concluded between the Ministry of Defense of the Russian Federation and OJSC Il. Light transport Il-112V with a maximum load of up to 5 tons is designed to transport personnel, military equipment, various types of weapons and other goods. IL-112B will replace the fleet of An-26 aircraft.
For the Il-112V, the St. Petersburg company ODK Klimov develops a turboprop engine TV7-117ST, which, along with the AV-112 air screw and the RSV-34C screw control regulator (the developer, JSC "NPP" Aerosila "), constitutes the power plant of a new aircraft .

According to the President of the United Aircraft Corporation Yuri Slyusar, the first flight of IL-112V is planned before the end of 2017.

On February 3, 2017, the docking of the wing with the fuselage was completed on the first prototype IL-112V and the aircraft entered the final assembly shop.
On February 22, JSC "IL" started work on assembling an experimental sample of a procedural simulator - an important element in the preparation of the first flight of IL-112V.
April 5, 2017 at VASO received the first engines TV7-117ST.
On April 11, the Board of Directors of OJSC "IL" approved a deal with the LII them. Gromov to equip the pilot Il-112V aircraft with the KBTI-M kit for testing.

According to Russia's Vice-Premier Dmitry Rogozin, the year 2017 has become "rich in aviation premieres"

GORKI, May 29. /TASS/. Russia will begin the trials of its new Ilyushin Il-112V military transport plane at the end of this year, Vice-Premier Dmitry Rogozin reported to Russian Prime Minister Dmitry Medvedev on Monday.

The Il-112V is a light military and transport plane with a maximum load of up to five tonnes. It is designated to transport personnel, military hardware, various types of armaments and other cargoes. The aircraft can be used at small unequipped aerodromes with both concrete-paved and soil-based runways. The plane is expected to be rolled out in two modifications: for civil aviation (the Il-112T) and military transport aviation (the Il-112V). It was reported earlier that the Russian Defense Ministry wanted to order 62 such planes.

The debut flight’s rescheduling "is largely due to equipment" and won’t affect the start of the plane’s serial construction, the chief designer said

"Our plans point to the end of this year. However, the first flight will most likely be rescheduled for the beginning of next year," the chief designer said.

The debut flight’s rescheduling "is largely due to equipment" and won’t affect the start of the plane’s serial construction, the chief designer said.

"We presume that the trials will last no less than two years. Further plans for the serial production remain as before," he noted.

The preparations for the serial production of the Il-112V plane at the Voronezh Aviation Enterprise have been launched along with the manufacture of the first machine, the chief designer said.

"We won’t separate the prototype aircraft and the series. In the final account, the fate of this project will be determined after two or three prototype planes are built," he added.

The Il-112V lightweight military transport plane with a maximum load of up to 5 tonnes is designed for transporting personnel, military hardware, various armaments and other cargoes. The plane is being developed as a replacement for the Antonov An-26 and An-24 turboprop aircraft.

The Il-112V can be used at small unequipped aerodromes with both concrete-paved and dirt runways. The plane is planned to be produced in two modifications: for civil aviation (the Il-112T) and for military transport aviation (the Il-112V). It was reported earlier that Russia’s Defense Ministry wanted to order 62 such planes. ZHUKOVSKY, July 19. /TASS/. The first flight of the new Il-112V military transport aircraft has been rescheduled for 2018, whereas its serial production will start in 2019, President of the United Aircraft Corporation Yury Slyusar said on Wednesday.

"Serial production hasn’t been rescheduled. Besides, we are launching this plane ahead of the plan, as these planes were set for 2021. Now we are ready to start in 2019, because we realize the need for such aircraft. The first flight has, actually, been rescheduled for 2018," he said at the MAKS-2017 International Aviation and Space Salon.

Slyusar explained that a delay of the Il-112V’s first flight was due to transitional period problems that appeared in the document flow of "two epochs": part of the documents were printed and part were digital.

The Il-112V lightweight military transport aircraft can carry up to 5 tonnes and was designed to transport crews, as well as military equipment, various types of armaments and other cargo. It was created to replace the An-26 and An-24 turboprop transport aircraft. The plane can operate on small scarcely equipped airfields with hard-and soft-surface runways. There are plans in store to produce two versions of this plane: the Il-112T for civil purposes and the Il-112V for military purposes. It was earlier reported that the military planned to order 62 aircraft.

The first prototype Il-112V was built

Interesting photos of the August 19, 2017 visit by the Deputy Prime Minister of the Russian Government Dmitry Rogozin PJSC "Voronezh Aircraft Building Society" (VASO) and the inspection of the first pilot prototype of the IL-112V light military transport aircraft (serial number 00-01) under construction there. As can be seen from the photographs, both turboprop engines TV7-117ST produced by JSC "ODK-Klimov" are installed on the plane. Both engines were delivered to VASO in early April 2017.

Nevertheless, according to the known data, the first flight of the first prototype IL-112V was postponed for at least the first quarter of 2018, which is primarily due to the decision to preliminarily conduct flight tests of the TV7-117ST engine on the IL-76LL airplane-flying laboratory (registration 76454, Serial number 0073469074). Flight tests of the engine on the IL-76LL, as reported, should be started in Zhukovsky in late August 2017. 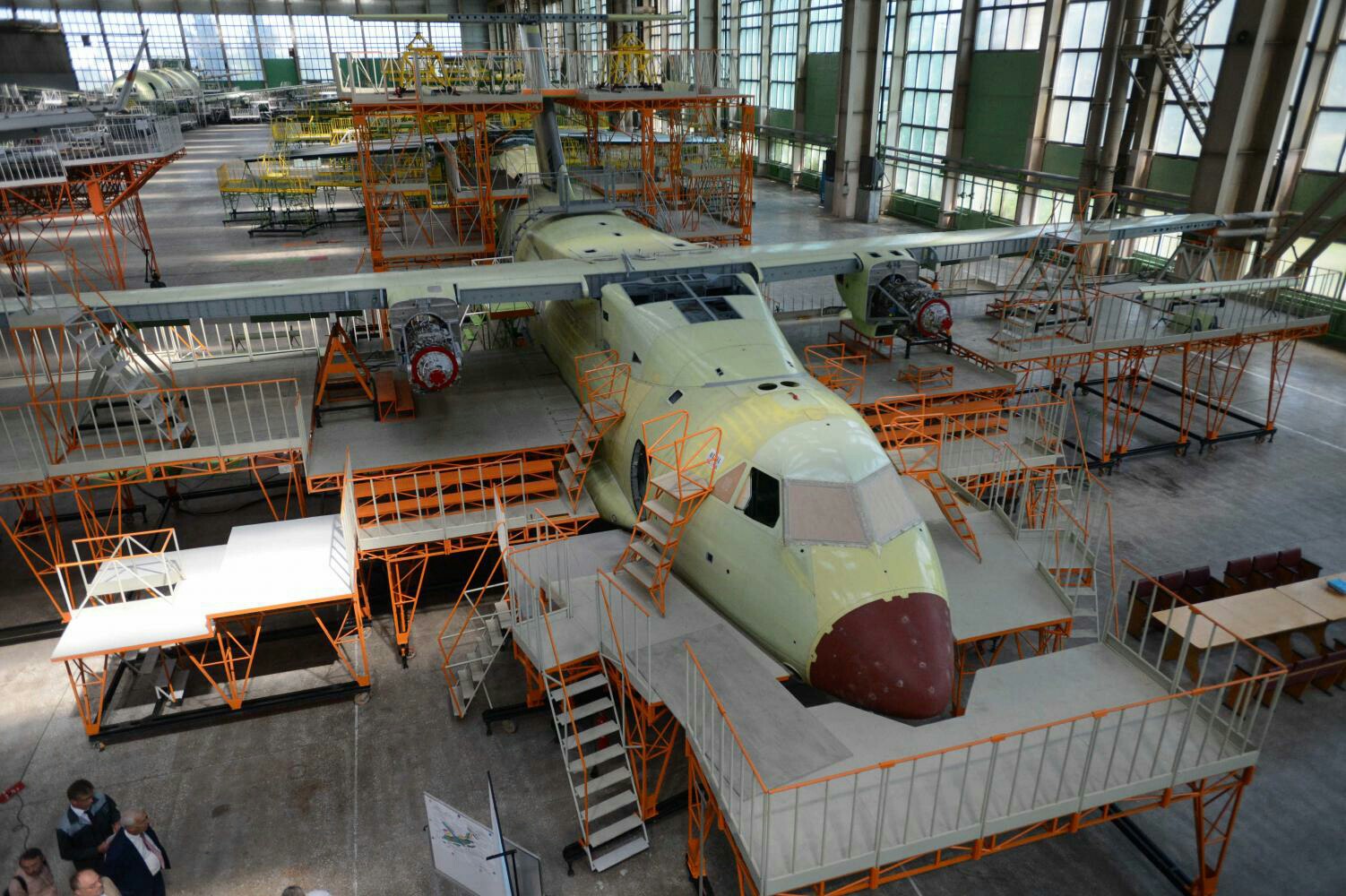 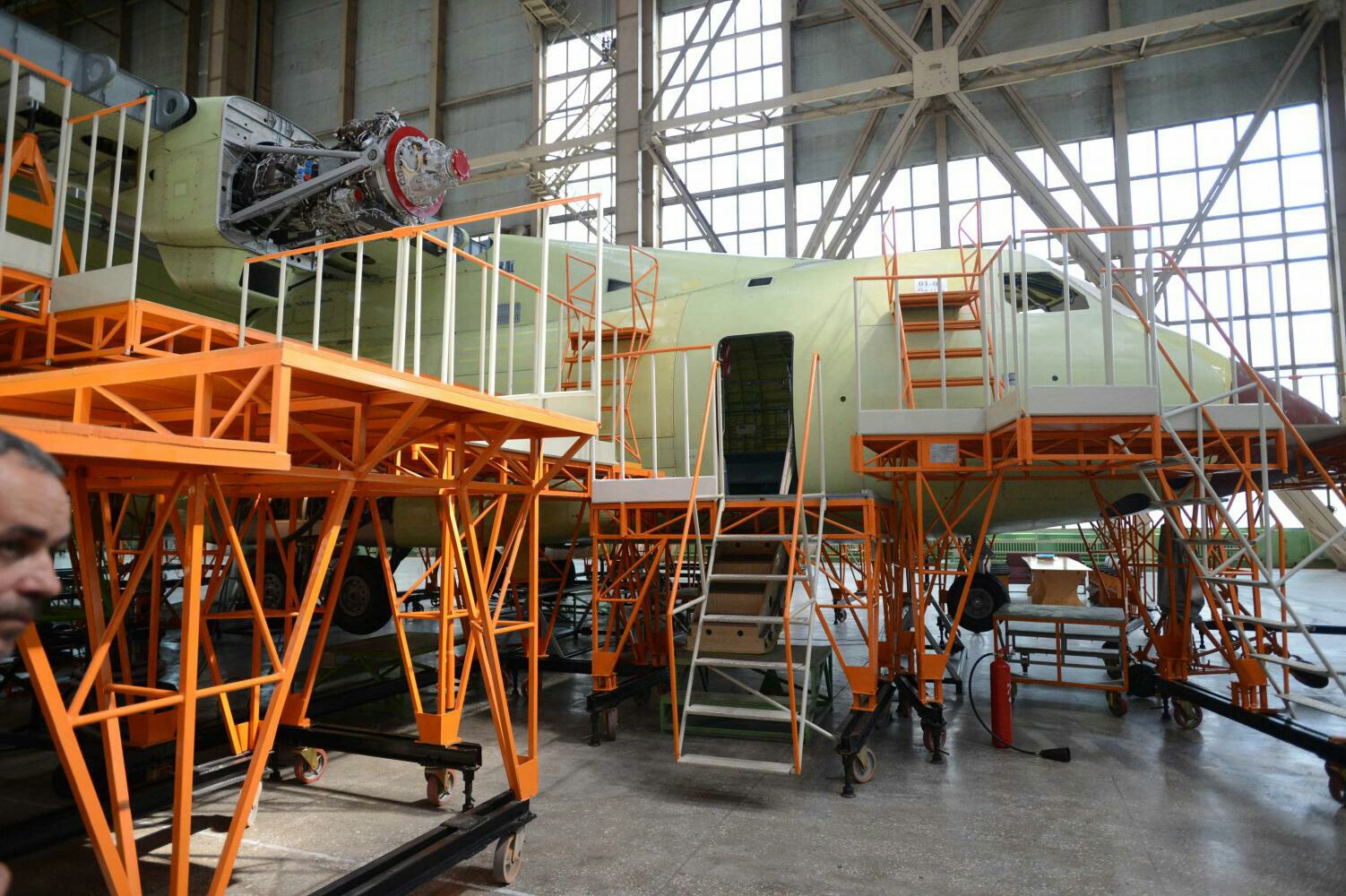 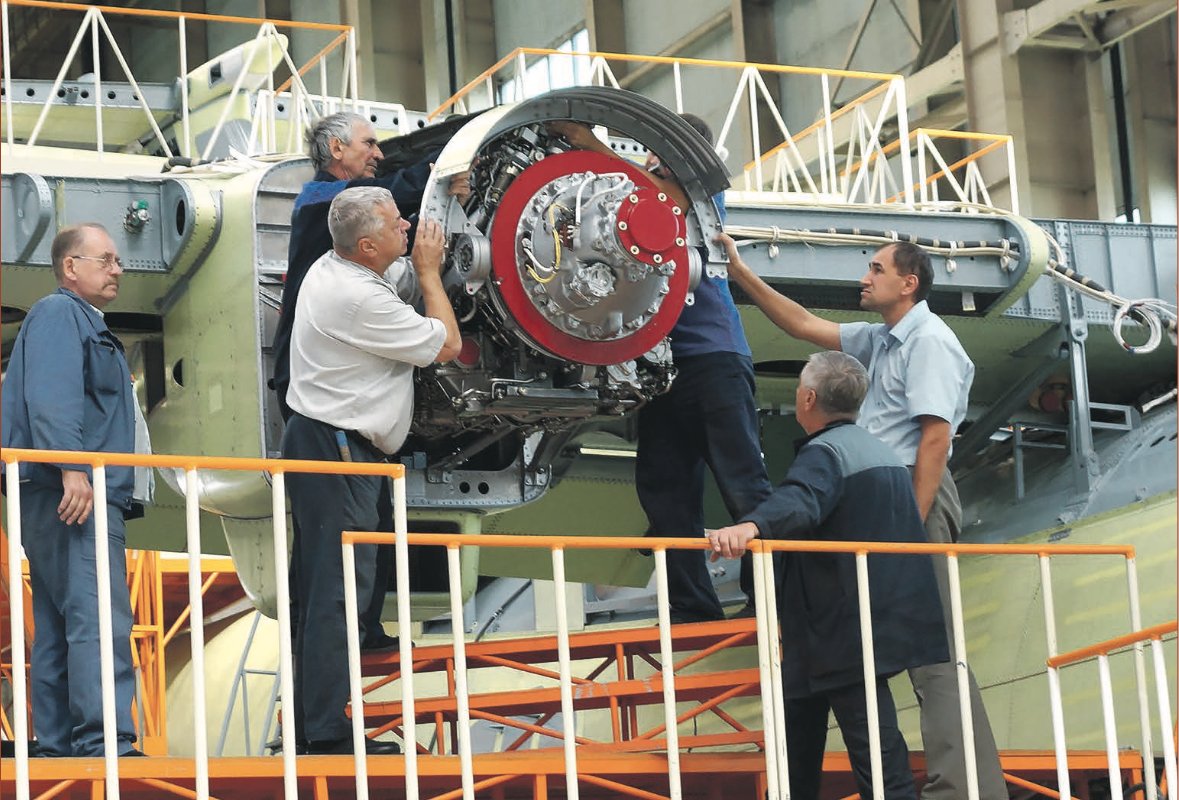 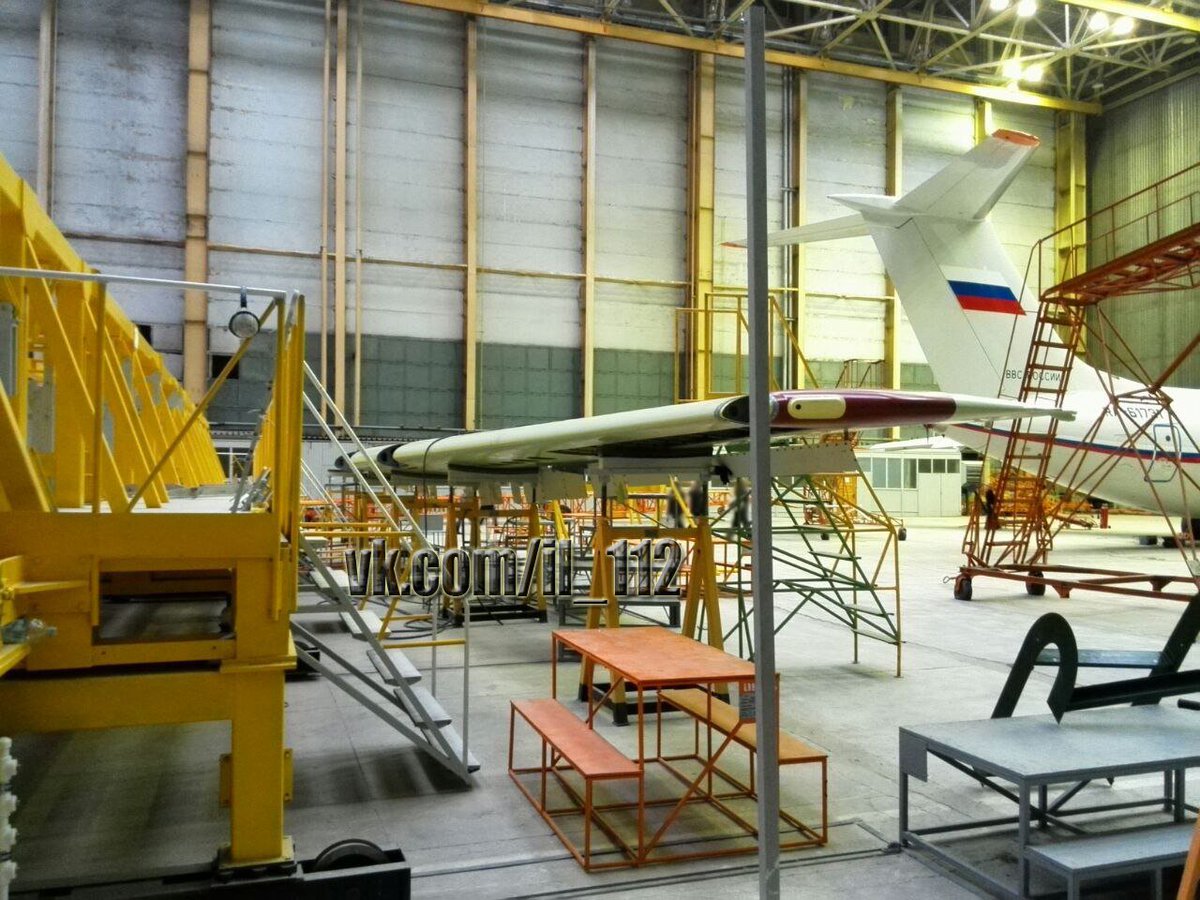 Fuselage of the 2nd Ilyushin-112V prototype (0102) at TsOS VASO in Voronezh, Russia.
Image via http://vk.com/vasooverhear 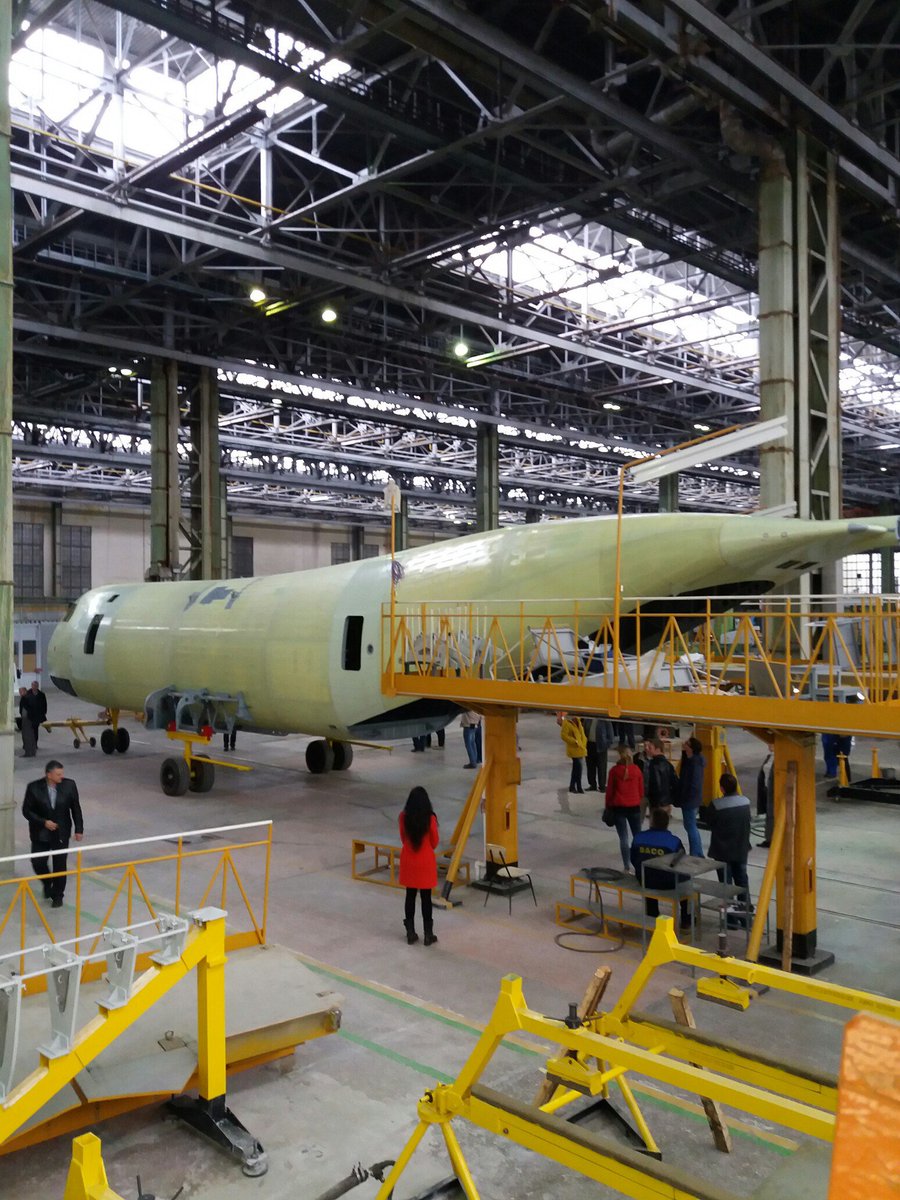 PJSC "Voronezh Joint-Stock Aircraft Building Society" (VASO, a member of United Aircraft Corporation) on January 13, 2018 reported on the laying of two more pilot prototypes of the Il-112V military transport aircraft in the slipway,

Now VASO is building. The first flight prototype of IL-112V (serial number 01-01), as well as a prototype for static testing (serial number 01-02). The press release of VASO is accompanied by photographs of the practically finished first prototype 01-10 in the final assembly shop of the enterprise, and the state of the sample for static testing is also visible. According to unofficial information, the first flight of the prototype 01-01 is now scheduled for the second half of 2018. 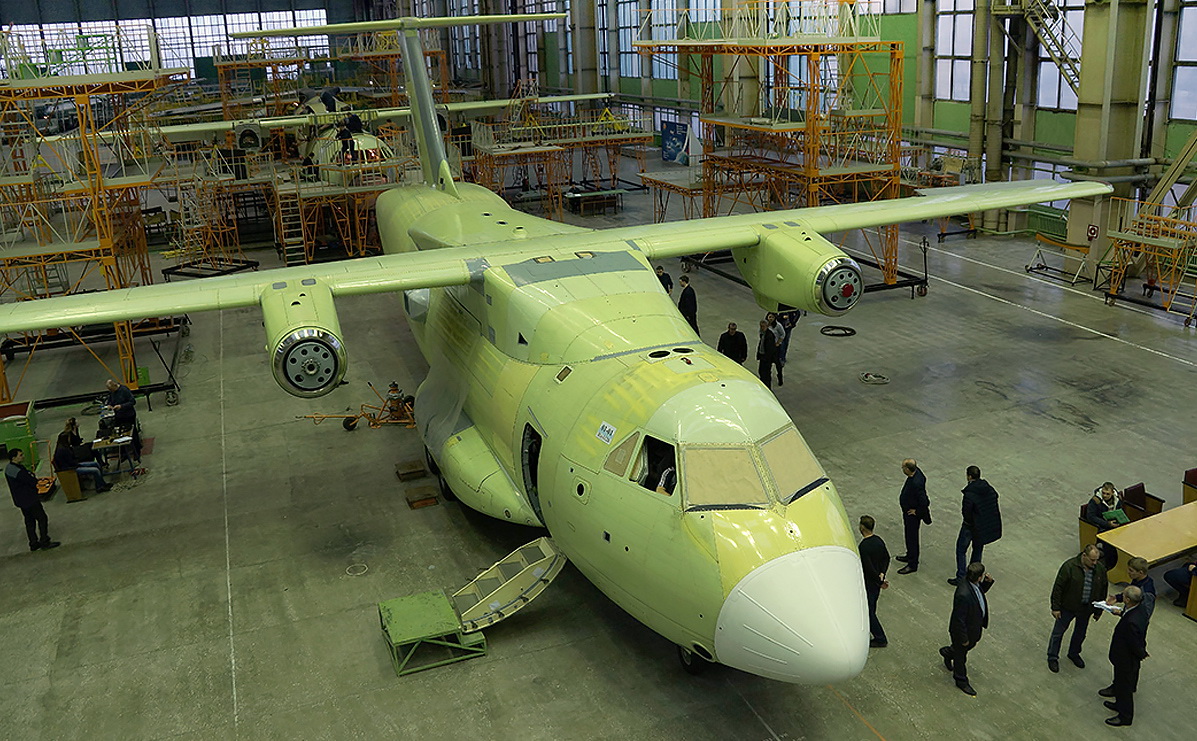 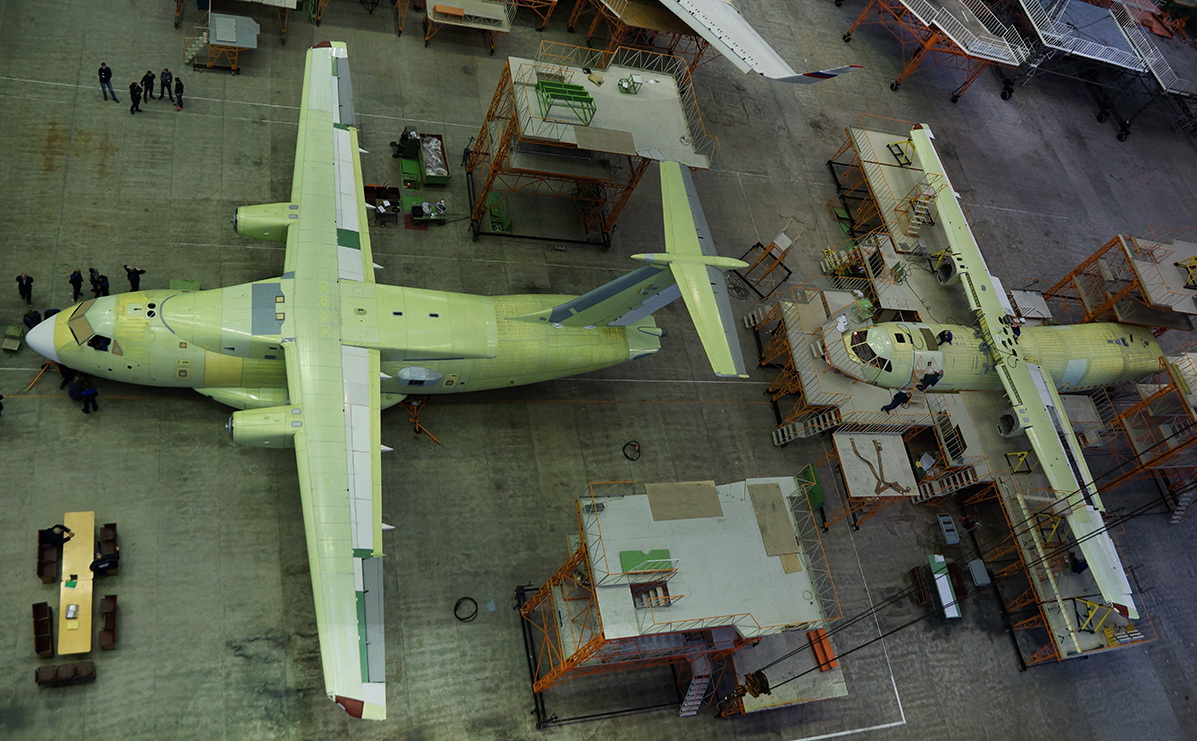 "In the framework of the state armament programme <...> was the planned order of 22 aircraft. But the demand for them is high because the aircraft of the previous series already go, the life cycle of their at the finish. I think that more than 100 aircraft in total, we will buy", - said Borisov.

According to him, it is assumed that the VASO will be the main enterprise to manufacture a large batch of the Il-112V, which the company is preparing for the first flight.

"This is the Junior model of the military transport aviation. Of course, we look very carefully at this project," - said Borisov.

Light military transport aircraft Il-112V with a maximum load capacity of five tons is designed for transportation of personnel, military equipment, various types of weapons and other goods. It is created to replace the turboprop An-26 and An-24.

Can be operated on a small maloobrazovanna airfields, having both concrete and ground cover of runways. The release is planned in two versions: for use in civil aircraft (Il-112T) and military transport aviation (Il-112V). Earlier it was reported that the military intend to order 62 of the machine.


Well  wouldn't be bad at all.

The FSMTC noted that in August 2017, representatives of the Indian Defense Ministry and the Air Force of India held a presentation of this project
Chennai, / India /, 12 April. / TASS /. Russia has formed a proposal for the Indian side on a light military transport aircraft IL-112, now it is under consideration. This was stated to journalists on Thursday by the deputy director of the Federal Service for Military-Technical Cooperation of Russia (FSMTC) Vladimir Drozhzhov.

India intends to buy everything from everyone.... Or 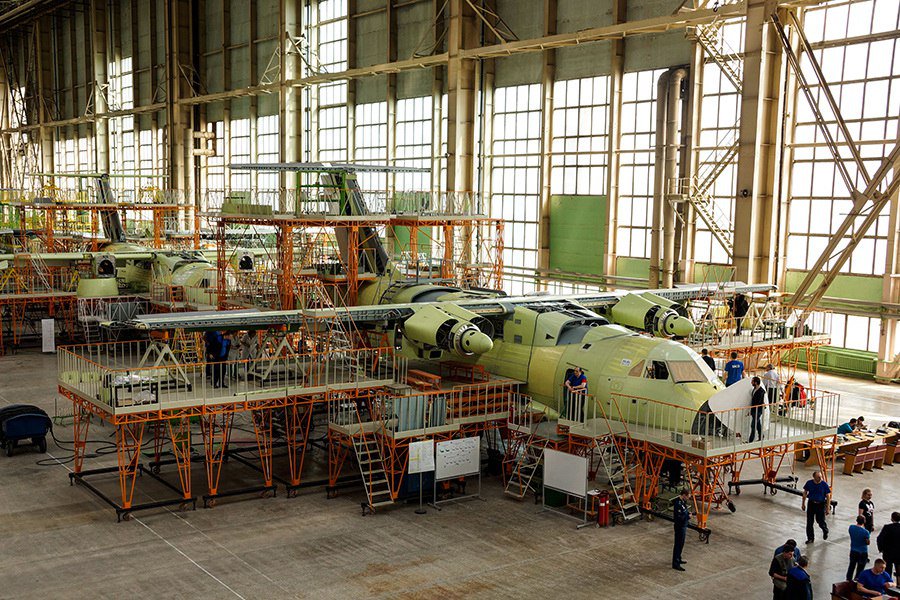 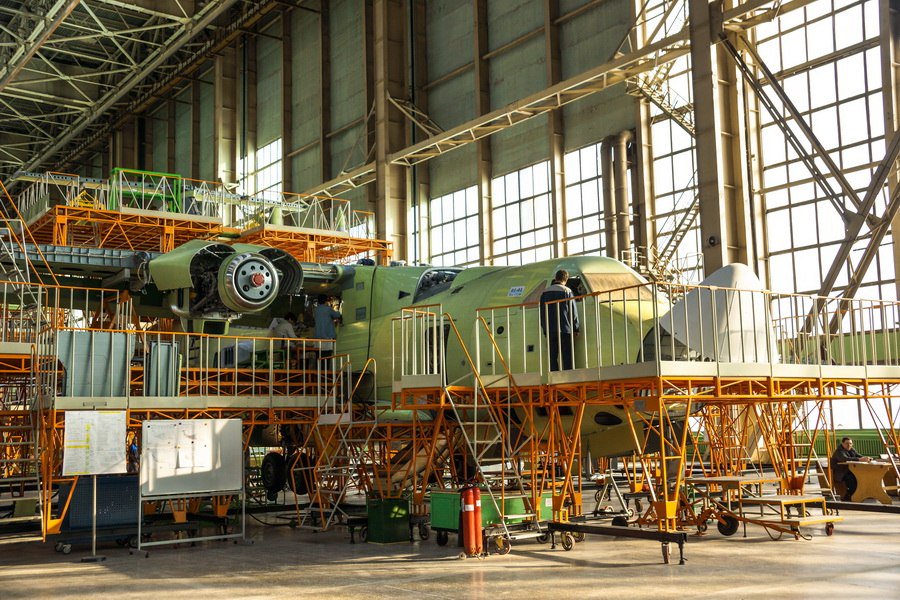 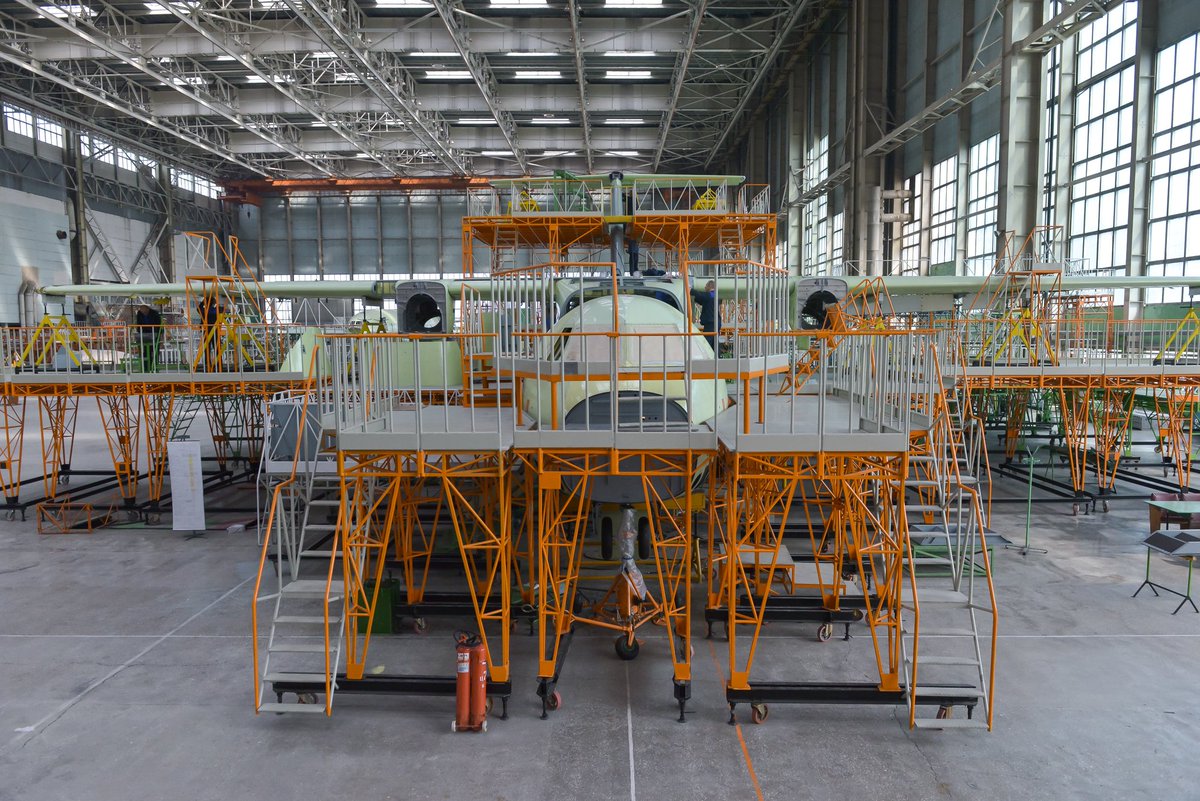 miketheterrible wrote:India intends to buy everything from everyone.... Or

perhaps Russia can sell with industry cooperation. During tightening sanctions it is both new large market, also Russian standards of production and foot in sanctions' door
miketheterrible

Anyway, India is prone to retardation in massive levels lately when it comes to procurement. What I'm saying is, it's not even worth mentioning what India is interested in cause usually nothing comes of it. Apparently the Ka-226 isn't even fully signed yet cause of India, FGFA, the transport aircraft, s-400, etc. All a joke to India it seems.
Nibiru

Nibiru wrote:Il-112 to be scrapped

Huston, we have a credibility problem.
miketheterrible

Russia's fleet of transport planes are in dire straights. Add to that, reduced budget is bullshit because as pointed out multitude of times, if one does the actual numbers and planned total amount (SAP programs), they are within target, and that also included these systems.

Wargonzo is actually rather very good and their videos are great. If the Il-112 is having problems because of design issues, then the question will raise as to what will they replace the old planes with? They have already spent way too much money on these programs, especially how far the Il-112 and the Il-79MD has gone for them to make any cancellations?

There is possibilities to its cancellation. But then what? Will they just copy design of the Antanov jet they are currently using and restart production?

If they cancel this, the Russian transport fleet will be in trouble. Essentially all they will have is the Il-76 and its updates, along with old jets. The Il-96 restart plan is good, but will it also face the same fate? Seems that even with over 20T rubles planned for military procurement, they seem to cancel a lot of projects. Most come down to piss poor production capabilities or design issue....

Wanna guess who is in charge of this particular project (112)?

Hint: he is related to Trampoline Man...
Sponsored content