Eh she spoke stupidity sure but that's not a declaration of war nor could it be considered one. Again her words where stupid as shit but she didn't mean Germany was literally at war, frankly speaking she doesn't even have the power to declare that.
billybatts91

They going to need a lot more troops to do that.....

Oh we are sending Abrams, and like I said in American hands and in numbers they are game changers. However, American hands means logistics, air superiority/air supremacy, artillery superiority, logistics and support services, and years of training. Ukraine has absolutely none of those. They may make a local showing but a few well aimed hits and its over

Imagine I am a dreamer ...
But those declarations might be empty good enough.
Maybe they don't believe their own propaganda anymore and are quite convinced that no deliveries will happen in reality as there will be nobody to receive the shipment ...

That lancet was very slow. They could have downed it with their ak-47 for sure. From the videos shared until today, it seems to be very bad when used horizontally like that. Slow and hard to aim. When coming from the top on falling on the target it is much more faster and manoeuvrable.

Can't wait to see it used against leo 2 and abrams. They need to anticipate that APS will be deheloped to counter such drones in the future and need to work on a counter technology like adding a small dummy rocket to fire before hiiting the tank so that it triggers the APS.

Results will be terrible for western tanks and they will all add APS in the next 2 or 3 years. 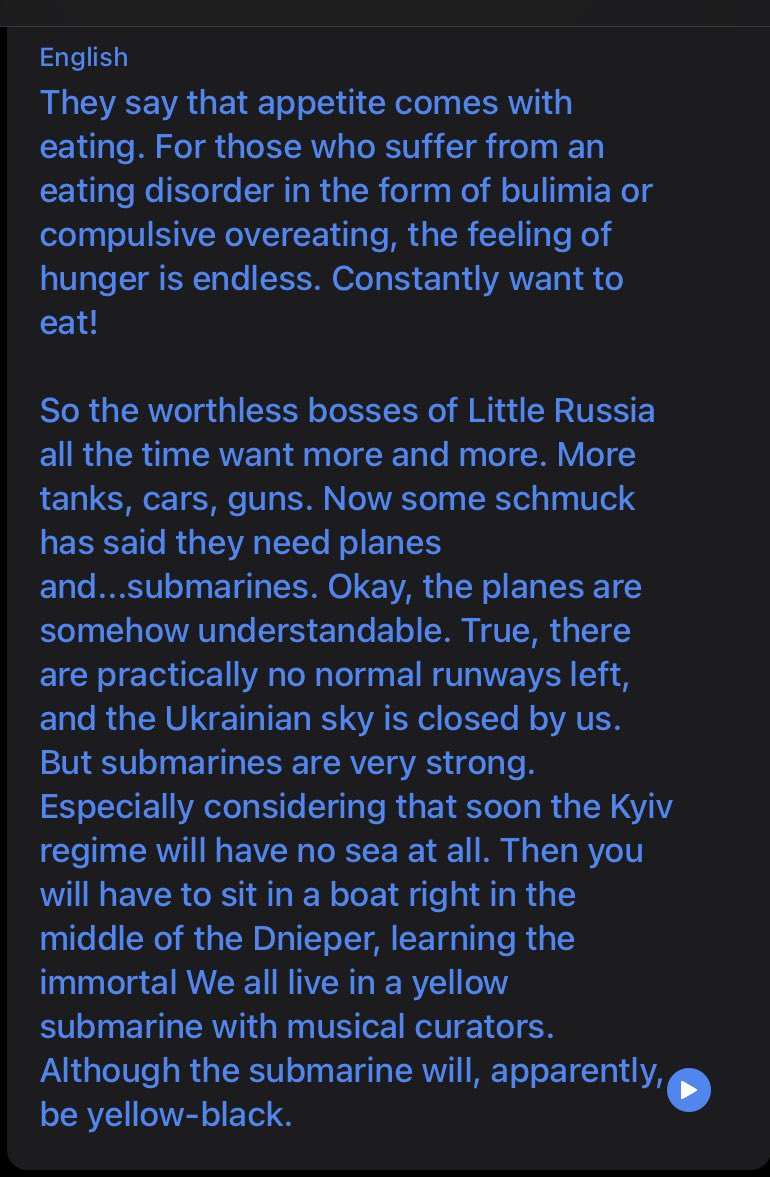 They are used in Yemen with all this, including american crews, and turned out to be complete garbage.

Ugledar is under attack, Russian troops entered the city.

Many believe that the Germans are an intelligent people. I think it is a stupid nation. Today Ireland is a much more intelligent and prepared nation than Germany. The Germans are workers and little else. They lack geopolitics and worldview. Since the Holy Roman Empire they have been subject to manipulation and international powers. They do not have independence.
The German has a problem that is typical of the people of the north. He is submissive. They lack rebellion and reaction capacity. They only had something like that with Martin Luther and Hitler.
But also, who makes decisions in Germany? who are racially pure and not fifth column immigrants and jews who want a war with russia?

How many Ukro troops will be trapped once the Bakhmut cauldron closes?

They forgot to paint the 'target' on it

Tony
@Cyberspec1
·
11h
Earlier in October, Hensoldt announced that it had received a contract worth "tens of millions of euros" for the supply of four TRML-4D radars to Ukraine as part of the IRIS-T air defense systems transferred by Germany. 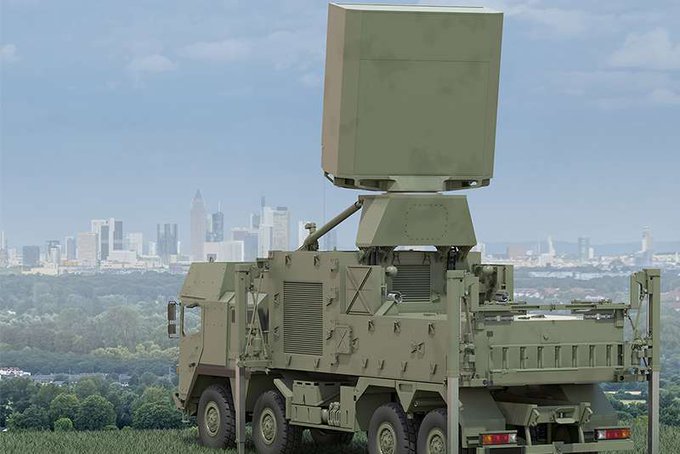 Ireland is a smart nation? Ok

smart at destroying itself

Also, Germans are at war. They are at war with Russia (proxy) and inter block war with USA and whole EU who are pressuring them to squeeze milk out of a rock.

Just themselves to blame.

“How many Ukro troops will be trapped once the Bakhmut cauldron closes?“


Very little if Russia will continue with grinding fashion. They will be expelled and suffer casualties while retreating. No doubt they will leave stayback units, but I think US told Ukraine to retreat

For those of us who watched the battle of the airport unfold this is a map we longed to see. Pity it was delayed so long. 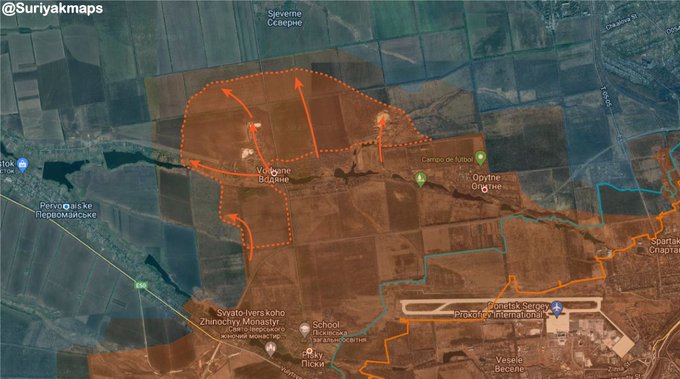 Meanwhile, this is on the money

--
@GeromanAT
·
Jan 24
It looks like RF is now in offensive action on the whole contact line. The objective is to pin AFU down in all sectors - while trying to break through on different locations.
So AFU won't be able to send reinforcements from active sectors - and reserves don't know where to go.

More forced conscription in the Ukraine. At gun-point this time

Nothing surprises me anymore

Well look at the situation in Ireland in the 80s and look at Ireland today. I think they are better.
Nobody attacked Germany. It is a country of stupid people and manipulable by international powers.

@AZgeopolitics
·
24m
Ugledar is a heavily reinforced fortress and a key stronghold in the area that is protecting the flank of the Ukrainian Maryinka-Kurakhovo line from the south. That is why It has enormous consequences and its fall will inevitably lead to the fall of Maryinka and imperil Kurakhovo

The Z groups that are storming the town are the Marines of the Pacific Fleet, the Donetsk OBTF "Kaskad" and BARS.

Donbass Devushka
@PeImeniPusha
·
25m
The 72nd brigade of the Black Cossacks of the Armed Forces of Ukraine faltered in Ugledar and fled.

The command of the Armed Forces of Ukraine is trying to stabilize the front by introducing a reserve. 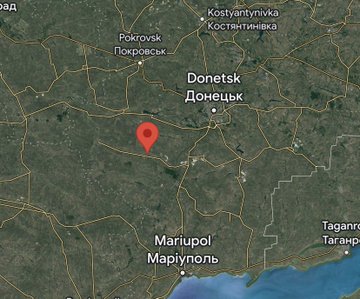 For those of us who watched the battle of the airport unfold this is a map we longed to see. Pity it was delayed so long.

The heights north of the airport has been drilled empty, with multiple-level Ukro fortifications.
Republican units are chewing them for months to avoid casualties.

Pro Russian forces had confiscated several Javelin and N-LAWS ATGMS. They can be used against the Abrams and Leopards.

As an aside Russia should develop their next generation of missiles as missile that can be ported between different systems. This will not just deliver greater capability but also cut back on cost drastically.

Pro Russian forces had confiscated several Javelin and N-LAWS ATGMS. They can be used against the Abrams and Leopards.
As an aside Russia should develop their next generation of missiles as missile that can be ported between different systems. This will not just deliver greater capability but also cut back on cost drastically.


Those will work the same way as working against Russkie tanks.
Fail.
Why do you advise Russkie to copy failure weaponry? You can describe your idea in points.
Russkie owns some two generations of missile ahead of the mentioned.
Even thought what you are talking about?

Not to mention that calling NLAW "atgm" is stupid, and it was enough to read what I have said about how it works to not be one.

Medvedev: Kyiv regime will soon lose access to the sea, 01.25.2023.
Medvedev invited Kyiv, which demanded a submarine, to test submarines in the Dnieper.

The Kyiv authorities risk being left without access to the sea, against this background, the statements of the Ukrainian side about the need for submarines look ridiculous, said Dmitry Medvedev, deputy chairman of the Russian Security Council.

The Deputy Chairman of the Security Council in his Telegram channel compared the volume of weapons supplied to the Kiev regime with an "eating disorder" in the form of bulimia or compulsive overeating, when "you constantly want to eat."

The Ukrainian leadership constantly wants more and more, "more tanks, vehicles, guns," and recently one of the Ukrainian representatives announced the need for the supply of aircraft and submarines, he noted.

He suggested that Kyiv take into account the fact that soon it “will not have a sea at all”, and in this case, the authorities of present-day Ukraine will have to sit in a submarine “right in the middle of the Dnieper” and learn “the immortal We all live in a yellow submarine.”

“Although the submarine will, apparently, be yellow-blaky,” Medvedev concluded.

Earlier, Deputy Minister of Defense of Ukraine Andriy Melnyk turned to the West with a demand to transfer battle tanks, fighter jets and submarines to Kiev.