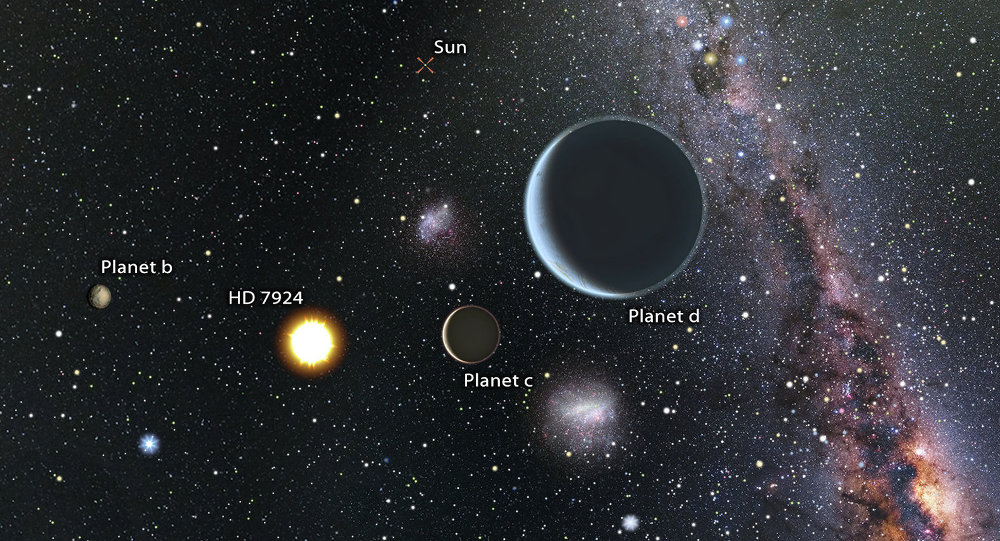 A team of astronomers has discovered three new planets orbiting a star 54 light-years away, using a ground-based robotic telescope which has enabled the scientists to speed up their search for small planets in the Sun's immediate celestial neighborhood.

"The three planets are unlike anything in our solar system, with masses seven to eight times the mass of Earth and orbits very close to their host star," said graduate student Lauren Weiss, leader of the team at UC Berkeley, which works together with astronomers at the Universities of Hawaii, Tennessee State and University of California Observatories on the project to survey super-Earth planets orbiting nearby stars.

All the planets orbit their star at a distance closer than Mercury orbits the sun, and complete their orbits in just five, 15 and 24 days.

The first evidence of planets orbiting HD 7924 was found in 2009 by the W.M Keck Observatory in Hawaii, and measurements taken by the Automated Planet Finder [APF] Telescope at Lick Observatory in California validated their existence.

The exoplanets, which are invisible to the naked eye due to their distance and are comparatively dim next to their host stars, were detected using the Doppler technique to detect the wobble of star HD 7924 as the planets orbited and pulled on it gravitationally. Doppler spectroscopy, or the 'wobble method,' detects the Doppler shift of the light coming from the star to deduce the planet's mass and orbit, a technique which has been used to find hundreds of exoplanets.

This picture shows the Automated Planet Finder [APF] at Lick Observatory, which has been collecting measurements since January 2014 in the search for Earth-sized planets around nearby stars.

The astronomers wrote software to enable the APF telescope to search for planets without a human in control, said Benjamin 'BJ' Fulton, a graduate student at the University of Hawaii at Manoa, having "initially used the APF like a regular telescope, staying up all night searching star to star."

Fulton explained that the robotic observations are the start of a two-year project to systematically survey for super-Earth planets orbiting nearby stars.

"When the survey is complete, we will have a census of small planets orbiting sun-like stars within approximately 100 light-years of Earth," he said.

Andrew Howard, a professor of astronomy at the University of Hawaii, said the level of automation allowed by the robotic observation "is a game-changer in astronomy," and akin to "owning a driverless car that goes planet-shopping."

The goal of the AFP, say the researchers, is to find small planets orbiting the nearest stars, some of which might have temperatures and surface conditions suitable for life.

Solar System Rocked by Discovery of Water on Mars

Solar System Rocked by Discovery of Water on Mars

MOSCOW, April 10. /TASS/. A multinational group of scientists has revealed the first ever image of a black hole, located in the M87 galaxy about 53.5 million light years away.

"In April 2017, all the dishes in the Event Horizon Telescope turned and stared at a galaxy 55 million light years away called M87 and the supermassive black hole at its core, and we are delighted to be able to report to you today that we have seen what we thought was unseeable. We have seen and taken a picture of a black hole," Sheperd Doeleman, of Harvard University and the Harvard-Smithsonian Center for Astrophysics, told reporters at the National Press Club in Washington.

"We now have visual evidence for a black hole," he continued. "We now know that a black hole that weighs 6.5 billion times what our sun does exists in the center of M-87. This is the strongest evidence we have to date for the existence of black holes. It is also consistent … with Einstein’s predictions."

The image was received as part of the Event Horizon Telescope project, which united eight radio telescopes all over the world, including in the United States, Mexico, Chile, Spain and France. Russia did not take part in the project because it has no telescopes of the required class.

The project was launched to observe two super-massive black holes - SgrA* in the center of the Milky Way, some 26,000 light years away, and the object in the heart of the M87 galaxy (also known as Virgo A).

The observations were carried out in April 2017, but it took two years to process the data.

Vyacheslav Dokuchayev, a leading researcher at the Institute for Nuclear Research of the Russian Academy of Sciences, described the project’s findings as "this year’s most prominent scientific discovery."

"The result is at the level of the Nobel Prize," he told the Ekho Moskva radio. "At last, we received a direct evidence of the existence of black holes. I think two or three people [from the team of scientists] are obvious candidates [for the Nobel Prize], this is one of the most complicated experiments in physics."

He expressed regret that Russia was not a part of the Event Horizon Telescope project.

"In order to take part in this project, a certain type of radio telescope is needed. Regretfully, Russia has no such telescopes, with a mirror of 15-20 meters in diameter," the scientist said.

Another Russian scientist, Alexander Lutovinov, a deputy head of the Russian Space Research Institute, said the Event Horizon Telescope project proved that our concept of how the Universe works was correct.

"If the information that was unveiled today will be confirmed - and so far there is no reason not to trust it - then we are witnessing a great discovery that proves the theory. We have received the first direct evidence of the existence of super-massive black holes… in centers of major galaxies," the Russian scientist added.

"Of course, it would be great if Russian scientists played major roles in similar projects," Lutovinov went on. "But achieving scientific progress and understanding how the Universe works requires powerful scientific equipment and instruments, and, therefore, serious investments are needed. So far, the Russian science cannot afford it.".

The minimal distance between Earth and Asteroid 163348 (2002 NN4) will be 5.09 million kilometers, which is "too large to speak about any serious danger"

"According to information we have, the minimal distance between Earth and Asteroid 163348 (2002 NN4) will be 5.09 million kilometers," the state corporation said. This would be closer than the distance that asteroid 52768 (1998 OR2) reached in late April 2020 (about 6 million kilometers).

According to Roscosmos, "this distance is too large to speak about any serious danger. The space corporation underscored that the scientists watch such objects closely, and therefore "various surprises are very unlikely here."

One of the clearest illustrations of how science progresses

One of the clearest illustrations of how science progresses. Two images of Pluto, only 25 years apart. Amazing. 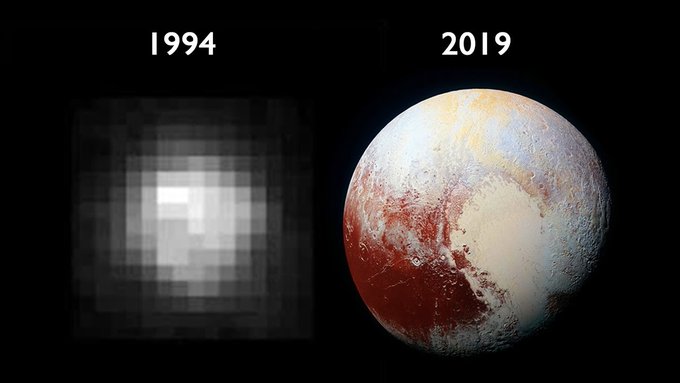 Sending new probes is real progress so in some sense the image is OK.

Finally we got first image from James Webb . They say images are sharp , and they do appear sharper , but there is a snow - flake distortion on the stars ! A function of the multi - mirror system ? Could this be corrected by computer programme , to reveal real image ? Are these images useful , in present state ?

Finally we got first image from James Webb . They say images are sharp , and they do appear sharper , but there is a snow - flake distortion on the stars ! A function of the multi - mirror system ? Could this be corrected by computer programme , to reveal real image ? Are these images useful , in present state ?

More of an artifact really of the way the image is captured. It's always going to be something

Yes it's possible to correct the image through software, and yes the images are all very useful regardless