miketheterrible wrote:Johnin or others, now that bosphorus is closed, I wonder what are other areas Russia can transfer besides Iran and Iraq?

Kurds. Give them kornets and igla-S as well as a shiton of lancet suicide drones.

It's time for russia to send weapons to nato enemies.

Sell Yasen-E to China. Sukhois and pantsir to Iran.

No big problem. Delivery time from other fleets will be a few days longer. The troops in Syria will addjust the timing of their orders.

One good thing is that the Russians will now have to seriously upgrade their facilities in Algeria.

M. K. Bhadrakumar
@BhadraPunchline
· 3h
US state dept on Assad's UAE visit: "We are profoundly disappointed and troubled by this apparent attempt to legitimize Bashar al-Assad... As Secretary Blinken has reiterated, we do not support efforts to rehabilitate Assad; and we do not support others normalising relations."

The americans are upset.... so something good must have happened...

GarryB wrote:The americans are upset.... so something good must have happened...

The yanquis have a pathological compulsion to mind and attempt to manage everyone's business.

UAE has called for all foreign troops that are illegaly in Syria to go home. Which means only Russians and Iranians can stay.

Kurds. Give them kornets and igla-S as well as a shiton of lancet suicide drones.

It's time for russia to send weapons to nato enemies.

Sell Yasen-E to China. Sukhois and pantsir to Iran.

Important that it only hurts the US and EU though... giving Kurds weapons would end up being used against Turkey and Assad in Syria or Iran, and they clearly are not the enemy.

I would say the best thing they could do is get the houthies and Saudis to sit down and work something out they both might be, if not happy with, at least both find acceptable to stop that brutal and costly war, so the west stops making money selling more bombs and missiles to the Saudis.

Welcome Iran into Eurasian trade groups... and ask Saudi Arabia if they want to join.... middle east is not Africa or Europe so it must be part of Asia...

Get them focused on trade and making money... don't bully them with threats but make it clear trade would be better without war...

Interesting move by the Government.

Kevork Almassian
@KevorkAlmassian
·
33m
Based on the latest presidential pardon, the Syrian ministry of justice sent instructions to all security apparatuses to cancel all searching warrants for crimes related to terrorism before 30/04/2022, in exception of murdering someone.

"The Turkish armed forces are ready for any tasks [in northern Syria]," Turkey’s TRT television channel quoted the minister as saying.

Akar also pledged to continue the fight against the Kurdistan Workers' Party (PKK) and the so-called National Defense Forces (NDF), a Syrian force Ankara believes has links to the PKK, till the last terrorist is eliminated.

On May 23, Turkish President Recep Tayyip Erdogan said his country was getting ready for another military operation in northern Syria with a view to expanding the 30-kilometer security zone established following the operation Peace Spring in October 2019. A new operation may be launched soon, with plans to involve about 50,000 Turkish troops and Syrian opposition militants backed by Turkey, local media reported.

As a result of Turkey’s previous operations in northern Syria, a security zone was established between the towns of Azaz and Jerablus north of Aleppo, Afrin was occupied, and the border areas east of the Euphrates River were taken under control.
GarryB

Send those Syrian opposition fighters out into the front units to fight the US supported Kurds...

GarryB wrote:Send those Syrian opposition fighters out into the front units to fight the US supported Kurds...

I think all those people being attacked by Turkey, USA, France... will start getting western made rpg, athm and stingers in mass. 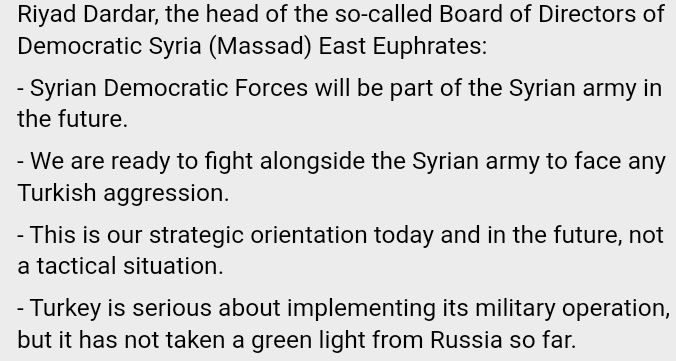 From a few days ago, found on Spriteer (Twitter)

Hole wrote:From a few days ago, found on Spriteer (Twitter)

Looks like Russia is playing the good cop and Turkey the bad cop, as awful as Erdogan is even he's aware that a Kurdish partition of Turkish land is a greater threat than the Syrian Eye Doctor that didn't even want to be President.

@Su35CM
·
Jul 5
New attack on the US base in #Syria in the governorate of Deir el-Zor. The third attack in two days. As a result of yesterday's attack, MLRS missile depot detonated, the explosion was visible 40 km away. US refrains from commenting. @5thSu

It has begun...
Either the United States withdraws or they will suffer damage everywhere. No more fun!
GarryB

No evidence that Russia had anything to do with this... but why not... you cannot say to do so would destroy an otherwise strong friendship... the US is giving them no reason to be friendly or even helpful. 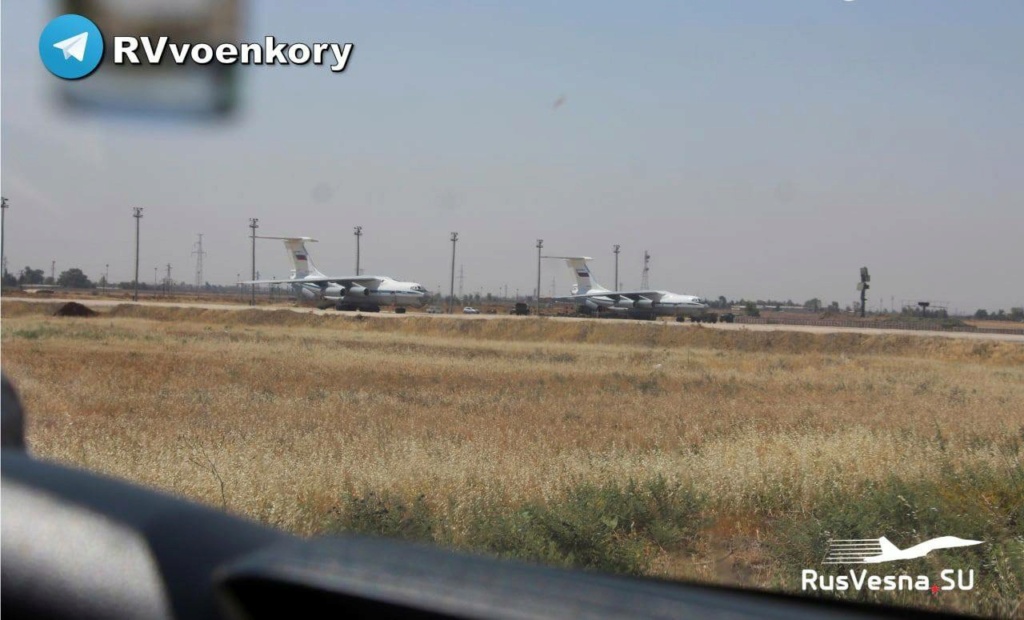 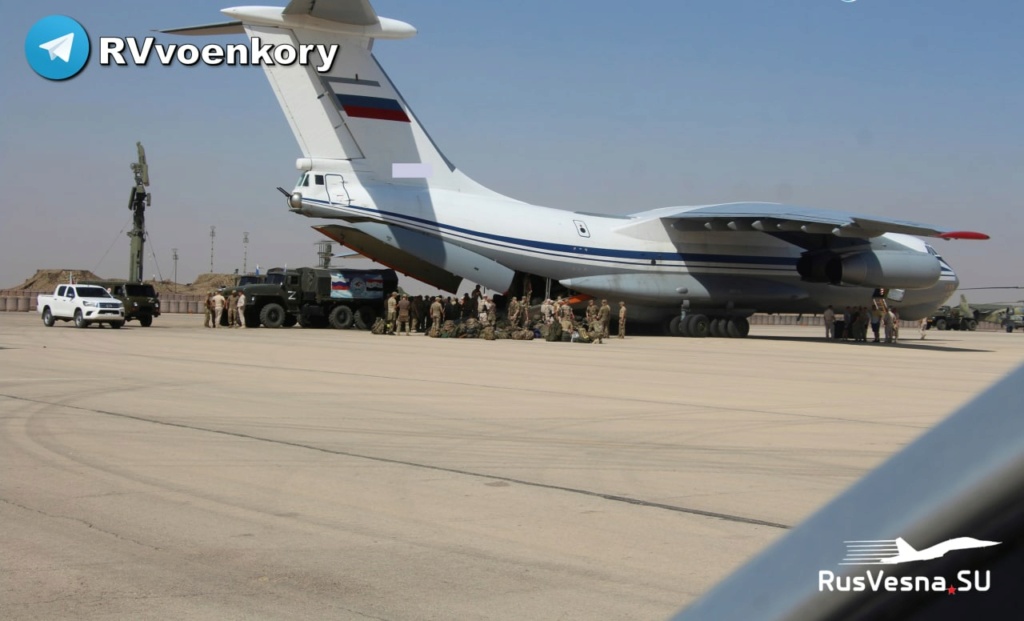 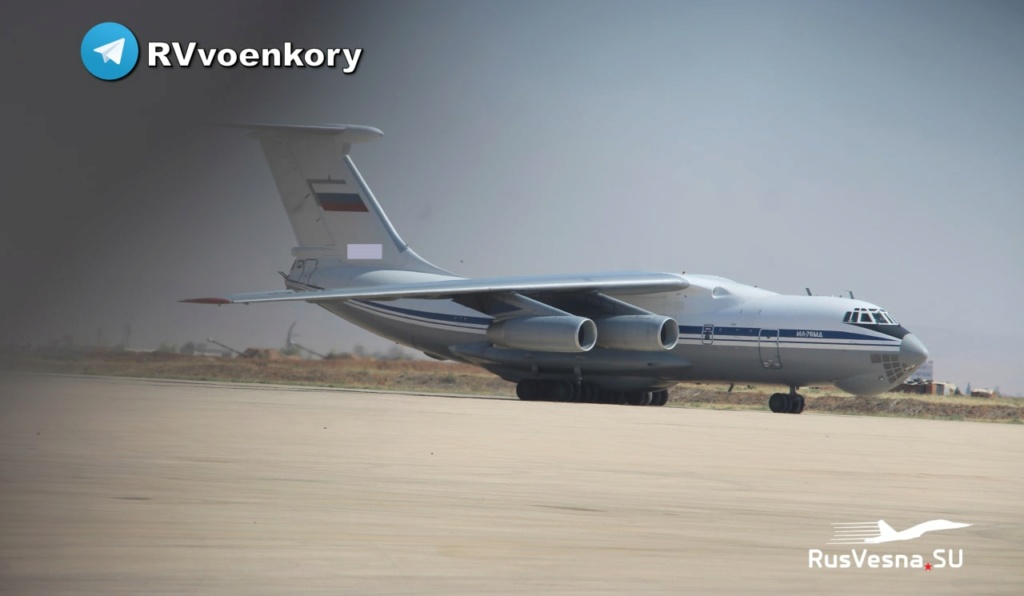 Russia deployed paratroopers to the Qamlishi(?) base in NE Syria a few days ago

Two Rats fighting . The occupying Turk Rats and Kurdish separatist Rats . Letting the separatism win in Syria , means having to confront the yank Rat-master , who has nukes and a vast army and lives across the pond , called the Atlantic Ocean , out of reach . Letting the occupiers win in Syria , means having to confront the Rats next door , without nukes and much smaller army , and cities within reach of artillery and missiles ! You have to fight one or the other , or a combination of two or More . Which one would you rather have ?

This could cause a bit of a reaction.

Middle East Update
@islamicworldupd
·
4h
On July 22, in #Qamishli, #Syria, a #Turkish drone destroyed a car carrying 3 #Kurdish women, one of whom was Salva Yusuk, deputy commander of the Syrian Democratic Forces (#SDF)

Still an effective weapon, easy to use and particularly valuable for Syria in the fight against terror. It's good that they had enough of it. 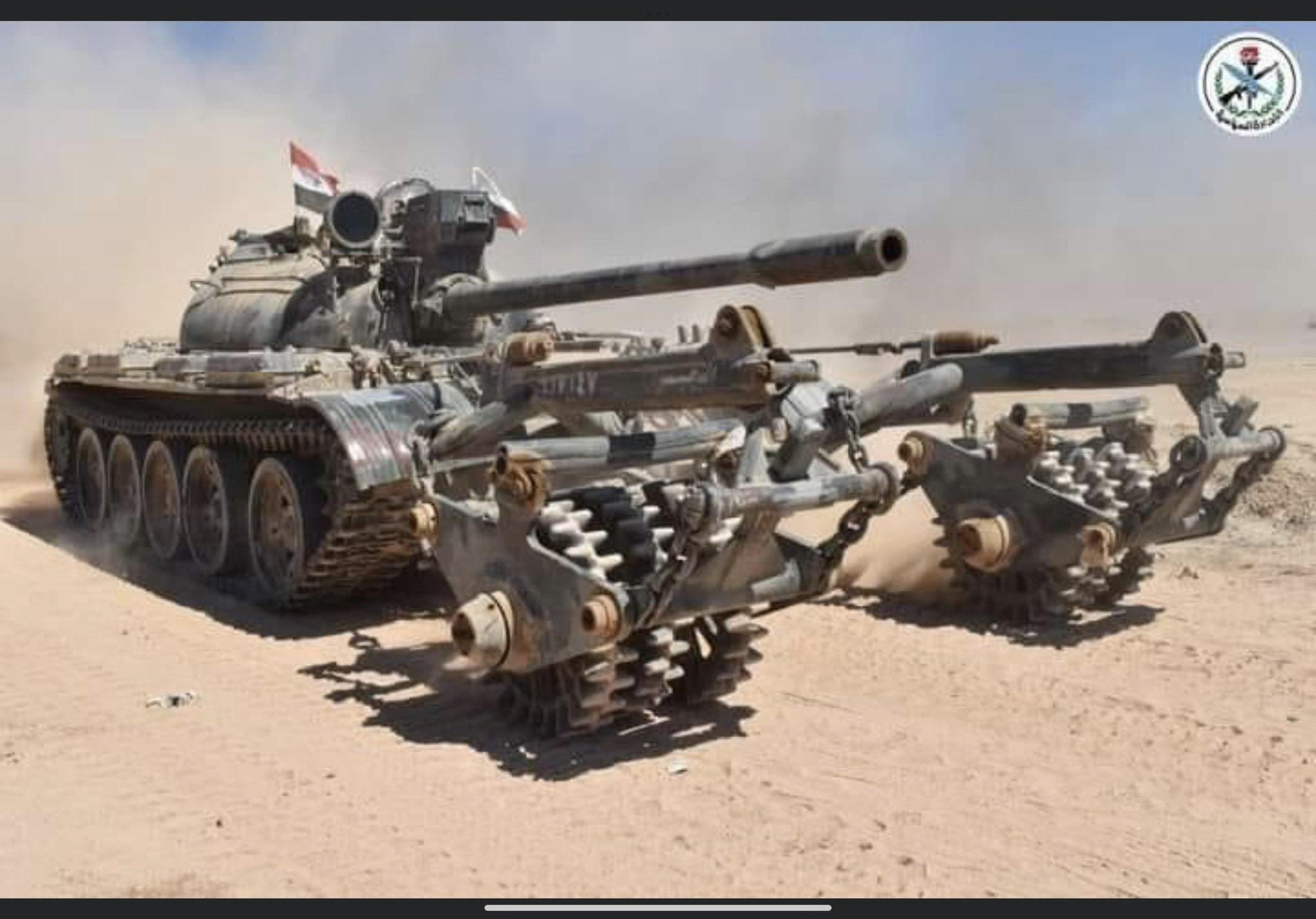 One of the newest night vision technologies is digital IR where a normal CCD camera that can also see in UV and IR frequencies is used with active IR lights... advantages over image intensification is that the CCD lasts hundreds of thousands of hours instead of 2 to 6 thousand for second and third gen II tubes, and it can be used during the day time with a high quality view, and instead of costing 3 to 10 thousand dollars per camera the new digital IR chips can actually be very cheaply made... some less than $50.

That IR searchlight would be very effective together with a new cheap digital NV camera... the Soviet Naval infantry were using T-55s in the 1980s still, though they were fitted with extra add on armour like the T-62s were, but essentially they had new electronics and optics but the old guns were just fine against most targets except the best first line tanks. Against anything but a brand new tank they were effective enough and in COIN type ops their HE rounds were just as effective as 125mm rounds were.
Mig-31BM2 Super Irbis-E

Members of Kurdish militia gathered and demonstrated in front of the Russian outpost at the entrance to the Qamishli Airport in #Hasakah.
They are demanding the Russia army act against the Turkish bombardment of Kurdish positions in northern Syria.
#Syria #SDF #Syrianarmy