Meteor is the best missile out there and its official range has never been leaked. You only see >100km which means nothing because it's much more than that.

Interestingly the meteor has a good but old mechanically steered pulse doppler radar head on it. The newer Russian missiles will indeed have fixed asea heads. This is a vast improvement as it's scan speed will be vastly superior and clarity much greater. Also some rumors about very unique aspects to the duel pulse motor on the r-77m and smart programmed use of the second pulse allowing it to have strong kinematics throughout flight.

I thought 5 were delivered in 2021. If the above is true, production rates haven't picked up in the slightest, and the Su-57 is built like a boutique super car, not a serially  produced aircraft. What happened to the enhanced reality assembly assistance? This should have massively upped production numbers. The production numbers should be 15-20 Su-57s per year. But this may be a pipe dream given that even Su-35 numbers are less than 20 per year, and the infinitely simpler(in terms of electronics, metallurgy, composite material engineering, semiconductors) inokhodets is produced in even more pathetic boutique numbers.

You are aware that the UK France and Germany or Sweden can't decide what their plywood vaporware 5th gen fighter is going to look like right ? These are historic aviation powers.

So what's the big deal that Russia isn't quite building enough su 57's in a year for your liking ?

R-37M is a different class of missile, and its not ideal against fighter sized targets.

That is not true... it can engage 8g targets, which means it is not like the R-33 which was mostly for use against large aircraft like inflight refuelling aircraft and AWACS and also bombers like B-52s and B-1Bs and B-2s.
The fact that it has not been widely deployed for all Su-35s etc does not mean it wont... the weapon bay of the Su-57 is supposed to be compatible, though I suspect the product 810 fits better.


Also all medium to long range AAMs use lofted trajectories, making them have a huge energy advantage over intercepting missiles. You keep claiming that AAMs can destroy other AAMs. Has this ever been tested by any air force? If yes, which one, when and what was the probability of successfully hitting them.

Most Soviet/Russian SAMS are designed to shoot down HARM type weapons... they have proximity fuses and don't actually have to hit anything to be successful.

During the cold war the Soviets had the R-27P and R-27EP which are passive radar homers that home in on enemy radar and jammers.... for instance if you are flying along and suddenly get illuminated by an F-15 that is launching a SPARROW SARH missile at you you can fire an R-27EP at him which will home in on the radar signal from the F-15s radar that is illuminating your aircraft for his missile to hit. Your missile is faster and has longer range... more importantly when you launch your missile you are free to manouver as you please because it is fire and forget... the target is in illumination mode and wont detect your missile so your missile hits first and the illumination stops so his missile misses.

The 9M100 missile that is part of the ground based S-350 air defence system and is also part of the naval Redut SAM system that is optimised for short range self defence (CIWS) is also reportedly being developed as an air to air missile for self defence because it can be carried internally and fired without a target lock, with its lock on after launch capacity.

Originally it was supposed to be an IIR guided weapon like LMUR, but it seems they went for ARH for full all weather capability... either guidance option would be precise enough for anti missile use.


Btw those numbers are full of shit because they won't disclose the real value to the enemy.

Another important factor is these are ideal conditions launches... just because they state an AMRAAM can hit a target at 80km that normally means the launch aircraft is above 10km altitude and flying fast... probably supersonic, and the target is a closing target, so even when they say you can launch it against 80km targets the fact that the target is closing distance throughout the engagment means the actual flight distance of the missile might be 65 or 70km.

Of course against an Su-57 it might have problems getting a reliable lock when it gets closer.


How do we know that the AIM-120 D doesn't have 180km range and the MBDA meteor doesn't have 250km range? That could be their non doiwngraded range.

So far the record of the west for product performance figures has been very weak...

Their armour penetration claims for ATGMs from the 1980s and 1990s were outright lies.


The R-77 has more subsonic e drag due to grid fins and is a smaller missile than the R-27, so it's believabls that it has lower no escape zone

Hahahaha... and how much of its flight profile will be be flying subsonic?

The tiny little control surfaces on the AMRAAM that give it low drag also means its turning performance is actually pretty weak which makes evading it much easier.

The grid fins of the R-77 means it can turn harder without stalling and hit targets that might have dodged another missile.

BTW if you think grid fins are high drag then ask yourself why they use them on the Tochka SSM... the longer ranged Iskander uses thrust vectoring for manouver so it eliminated external control surfaces completely. 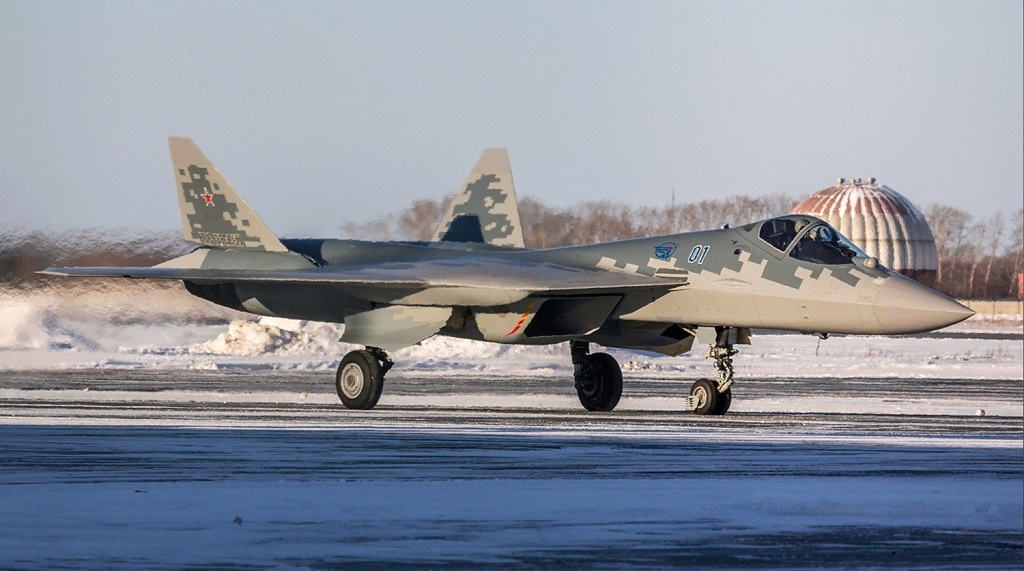 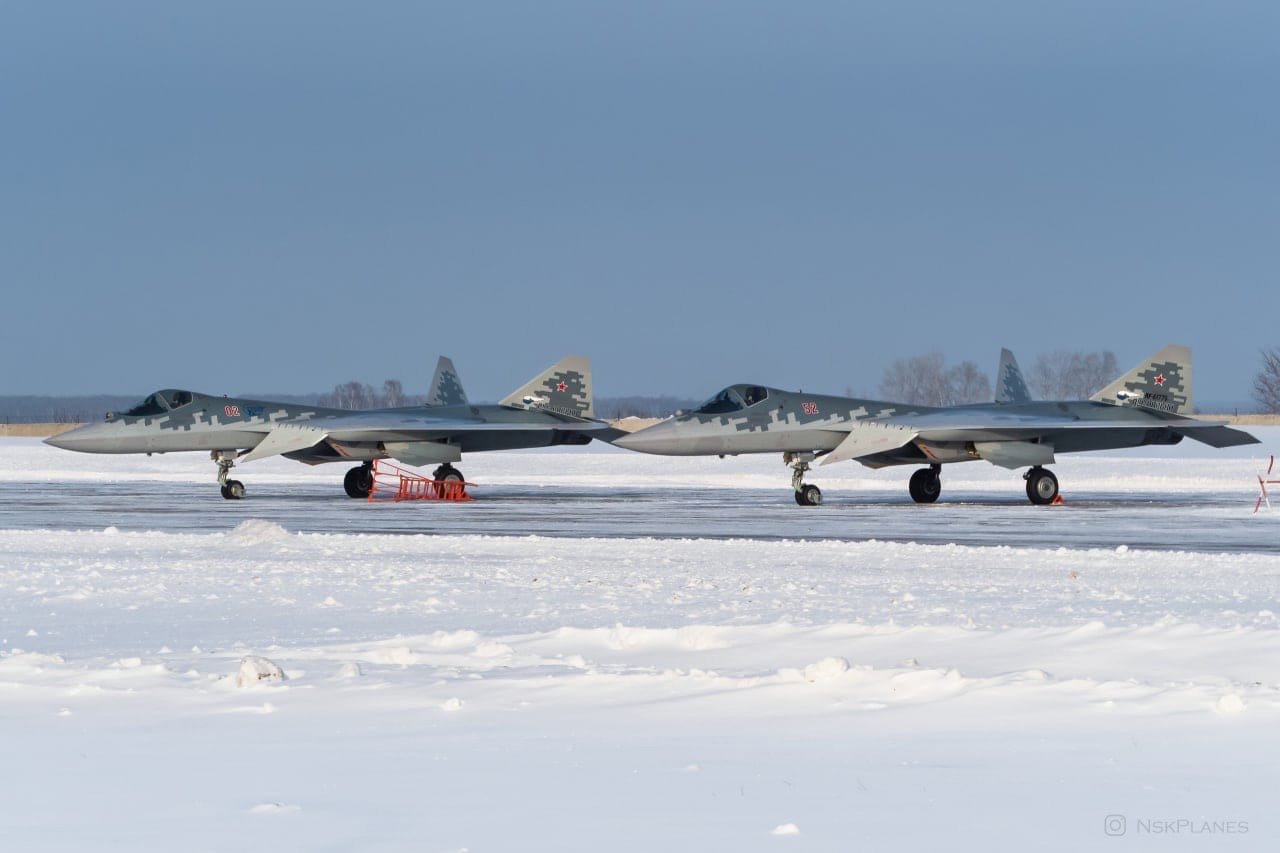 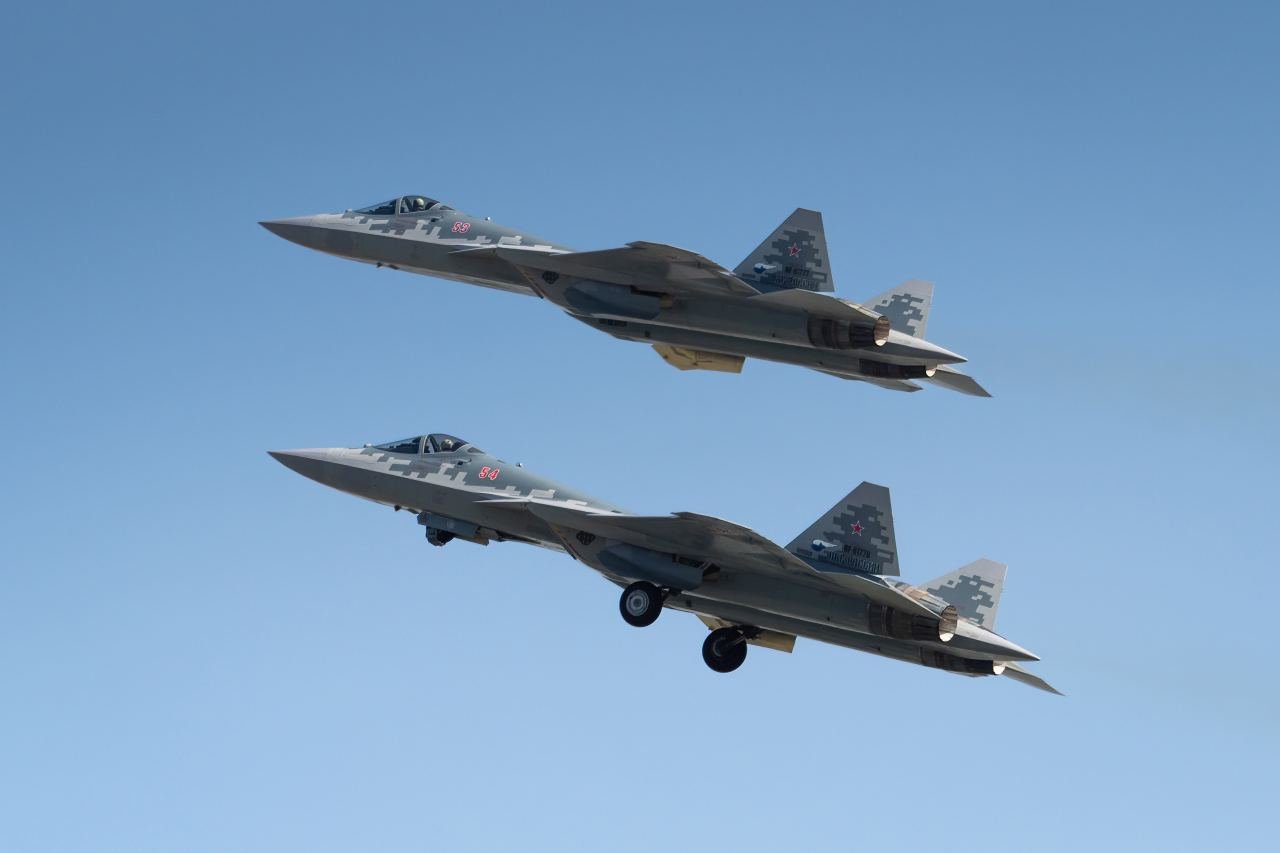 Thanks for the info because I didn't know that, since the picture I posted is 52 "red". This means that "red 52" is repainted in "52 blue".
lancelot 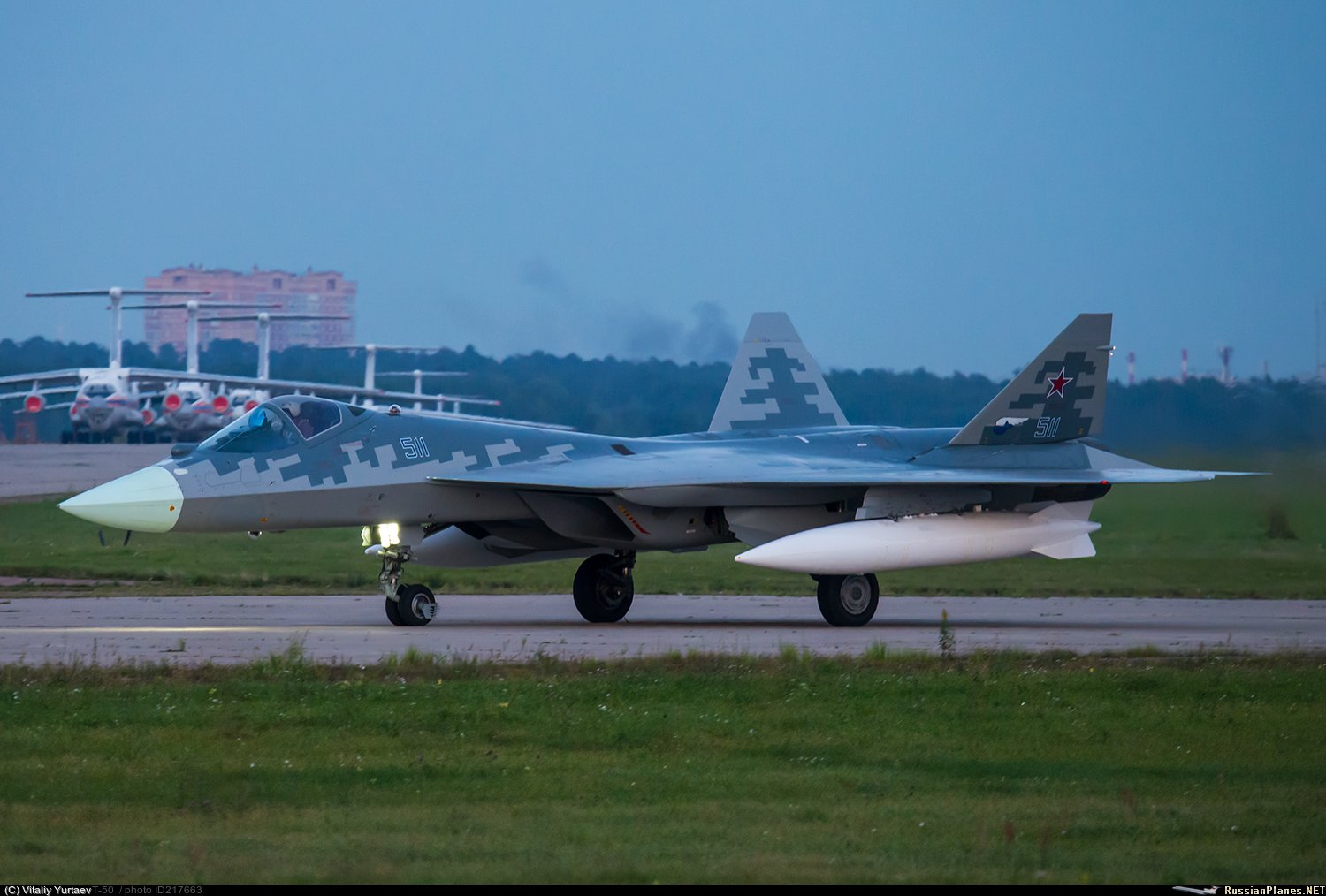 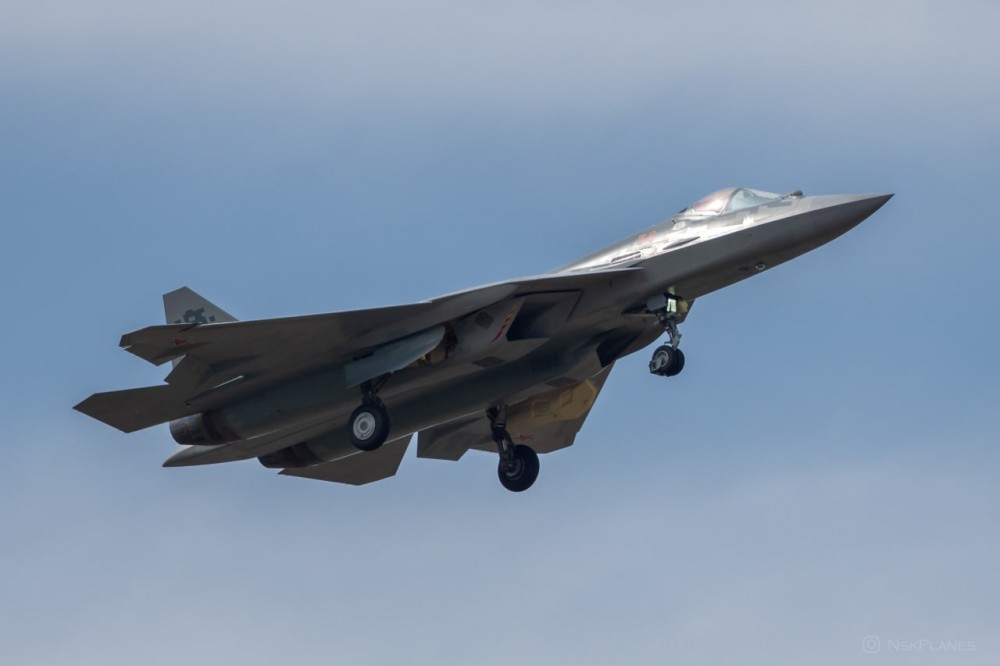 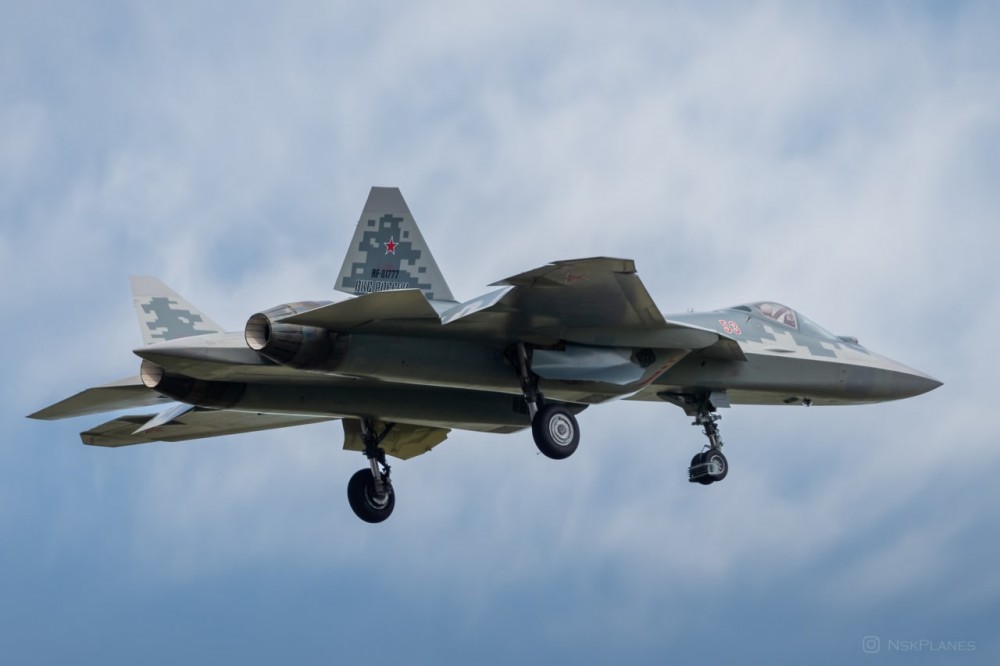 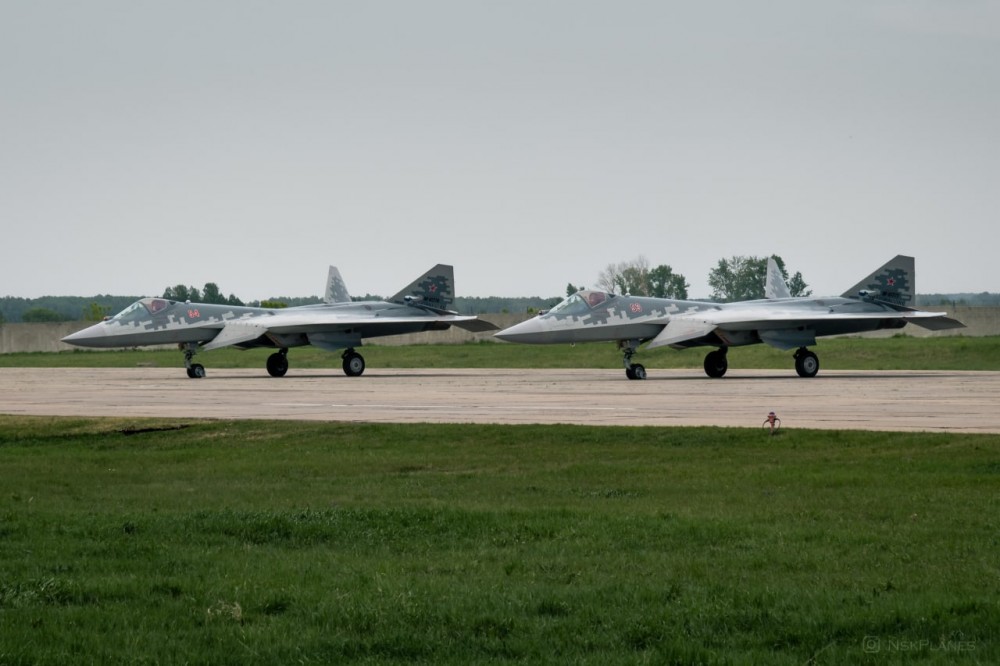 Steve Trimble from went on the aviation week podcast to discuss the new Top Gun movie. One of his gripes was that they hype up the su 57 too much.

Isn't it kinda cringe that they make a new movie in 2022 like this and it features the early 4th gen Tomcat ? The Tomcat is a cool plane no less. They partly answer this question in the podcast.
It would have cost too much to film the F-35 due to the expensive flight hours

Presumably the same is true with the F-22.

Also. This aviation week podcast changed their logo about 6 months ago.

Yep. That's right. This is an su 57 in their new logo. This isn't just an episode logo. This is their permanent logo. I understand why. The su 57 has the best lines of any fighter.

With a MS-21 in the background

Backman wrote:...Isn't it kinda cringe that they make a new movie in 2022 like this and it features the early 4th gen Tomcat ? The Tomcat is a cool plane no less. ...

They mostly use F-18s but F-14 is used as the ''cool plane'' in the last fight scene simply because even after all this time it's still the coolest plane ever made, nothing before or since came even close and they know it

As for the combat scenes they just took all the cool things they could find and blended them together: Stonehenge mission layout from Ace Combat,  trench run from Star Wars, Su-57 as final boss plane from Russia and air-force with F-14s and uranium enrichment from Iran


EDIT: They also ripped-off airplane theft scene from movie Iron Eagle which is ironic since Iron Eagle was a rip-off of Top-Gun

...not the cringe fighter generation argument again. There is no doubt in the late 90s/early 2000 we had moved far ahead in the aviation field. Still no doubt we have some amazing kit and still some good engineers but we largely squandered our fortunes and are only now picking up the ball again after our unipolar bubble was burst hard. We are so full of hubris it isnt even funny.

The su-57 is like the archangel of fighters. Pinnacle of aerodynamics and design. No other fifth gen can touch it in its grace and raw power and omnirole ability. The more I learn the more I love it. Even with it's current engines and avionics it can stand proud amongst peers. With the su-57m it will step ahead. Going into the early 2030s that will probably not be the case but the fighter they have made will stand the test of decades in future upgrades and development.

It certainly beats the new prospective turk fighter and korean fighter. It is a peer to the j-20 though clearly thry are different beasts with differing needs. The NGAD will be fierce competition and the more you study the development you see they are learning from Russians and Chinese in the need for long legs and great interception capabilities.

In short the fanboys can seethe all thry like. It cannot take from what the Russians have done in the development of the su-57.

Isos wrote:With a MS-21 in the background

I was gonna ask how you identified it but

Isos wrote:With a MS-21 in the background

I was gonna ask how you identified it but

Actually I checked the windows shapes. They are different from one company to the other.

That's how you know if it is a boeing or an airbus.

Does anyone know where to find the original production schedules for aircraft like the F-15 or F-18 or 16? I heard that they didn't produce very many at the start. And I'd like to compare it to the su 57 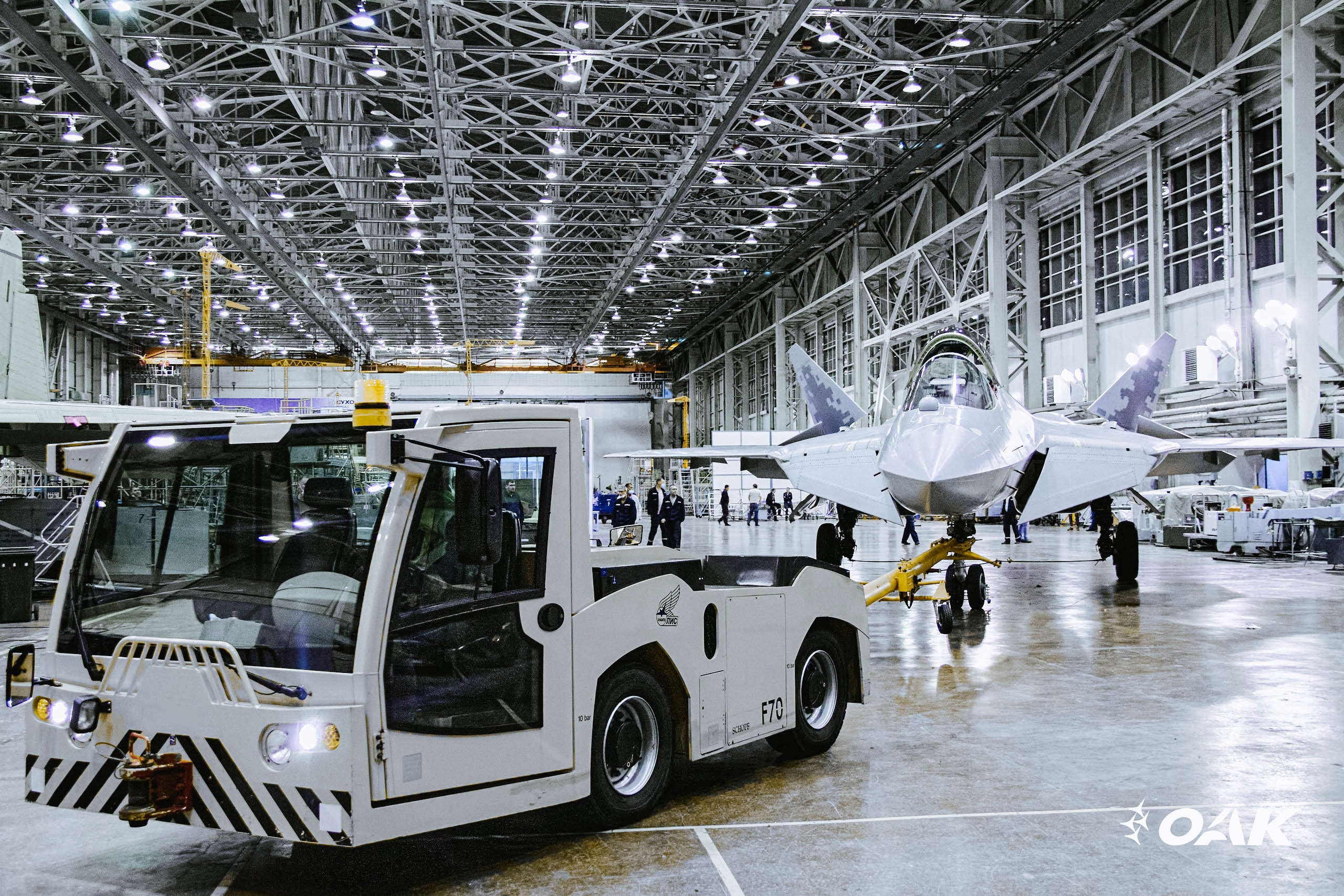 Russia has tested the technology of future air wars in Ukraine

How far have we come

How far have we come

well, this is quite a normal state of the final assembly shop. Not much different from what I saw more than 10 years ago.