What is the progress of Askold and tsiklon?

Both zaliv ships were sea trialing in black sea, I'd like to see them launch kalibr as part of their military trials against nazis
Podlodka77

Russian "Askold" will complete the test 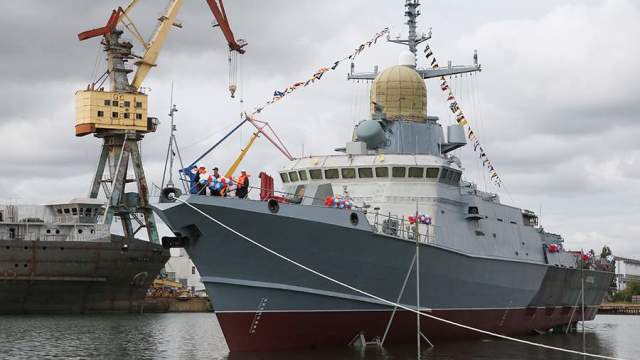 The Russian small missile ship (RTO) "Askold" of project 22800 (code "Karakurt"), armed with the Kalibr-NK and Pantsir-M complexes, will complete sea trials in the first half of 2023. This is reported by TASS, citing a source in the military-industrial complex.

“The Askold ship, armed with Caliber missiles and the marine version of the Pantsir complex, will complete sea trials in December and begin state trials in early 2023,” the source said.

The source added that "upon completion of the marine part of the test program, the revision of the ship will begin."

In October, the press service of the Russian Baltic Fleet reported that the new project 22800 Burya small missile ship, which is the carrier of the Caliber and Onyx cruise missiles, is undergoing factory sea trials at sea ranges.

The ASKOLD is on tests. Here is the latest photo. 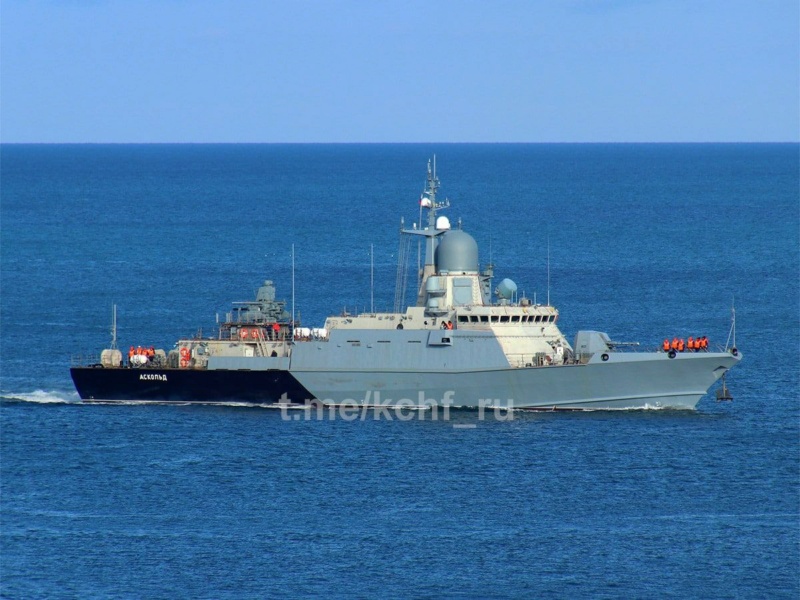 Edit: I suspect TSIKLON is already in service (but never announced). We will see.

I see some missiles armed on the pantsir complex. I know that it isnt it's doctrine for this vessel but it would be cool if it got a paket type anti submarine/torpedo system. Would be a small yet universal ship for air, land and sea.
lancelot

They should move these ships with the Pantsir-M to the Black Sea to exchange with those in there without it and modify prior ships to have the Pantsir-M. Without beefed up air defense those older ships are just targets for armed drones. MANPADS are not enough when drones can attack from outside MANPADS range.

Modernizing the old ones won't be easy as those have a different radar suit and the mast itself. That would be a serious modernization to be carried out.
Podlodka77

As reported, in October 2022, factory sea trials of two new project 22800 small missile ships (code "Karakurt"), completed by construction for the Russian Navy, began at once. On the Baltic Sea, on October 15, the small missile ship (SMS) Burya (serial number 257), built by the Leningrad Shipbuilding Plant Pella, made its first test run. A little earlier, tests of the Askold SMS (serial number 802), built in Kerch at the B.E. Butomy" (management company for OOO "Shipyard "Zaliv"). 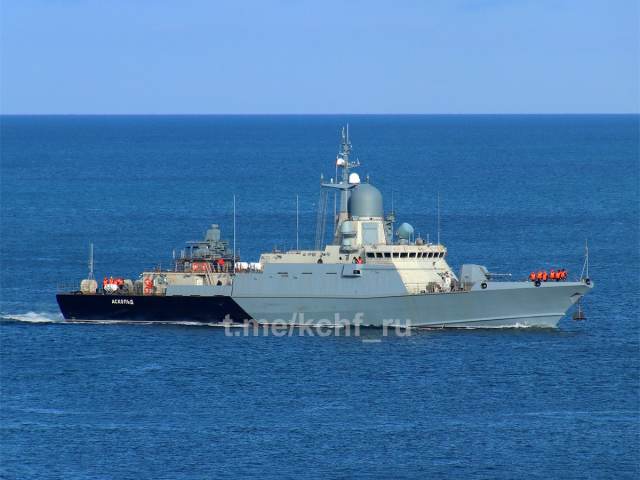 Recall that the MRK of project 22800 (code "Karakurt") was designed by JSC Central Marine Design Bureau "Almaz" (St. Petersburg) and was supposed to replace in the construction for the Russian Navy SMSs of project 21631 (code "Buyan-M") developed by JSC " Zelenodolsk Design Bureau". The Russian Ministry of Defense initially contracted 18 project 22800 RTOs in 2014, but in September 2020 canceled the contract for two units ordered by Vostochnaya Verf JSC in Vladivostok.

Due to the fact that small missile ships (SMS) of project 22800 are equipped with a main power plant as part of high-speed diesel engines M507D-1, the difficulties of Zvezda PJSC (St. Petersburg) in producing these engines in the required volumes led to the fact that the project 22800 series turned into a long-term and already launched hulls of ships have been idle for years waiting for these engines.

Now released for testing SMS "Storm" (serial number 257) is the fourth ship built entirely on the "Pella". It was laid down there on December 24, 2016 and launched on October 23, 2018, but as a result, it was able to start testing only four years later - three years later than the contract period. The Burya also became the second ship of this Pella construction project, equipped with the Pantsir-M shipborne anti-aircraft missile and gun system (Odintsovo was the first).

Three ships of project 22800 - Shtorm (serial number 254, planned to be renamed Kozelsk, but it is unclear , it was carried out), "Okhotsk" (serial number 255) and "Whirlwind" (serial number 256), - the hulls of which were built at the Federal State Unitary Enterprise "Shipbuilding Plant" More "in Feodosia (Crimea) and then towed along inland waterways to "Pella" for completion in November 2019 - May 2020.

The Askold SMS, which was released for testing on the Black Sea, is the second unit built under the contract of the Russian Ministry of Defense signed on August 5, 2016 with Zelenodolsk Plant named after A.M. Gorky JSC (Zelenodolsk) for the construction of five serial SMSs of the project for the Russian Navy 22800. Since the end of 2014, the Kerch shipbuilding plant "Zaliv" has been under the control of the Zelenodolsk plant named after A.M. Gorky, and now - under the control of the head structure of the Zelenodolsk Shipyard in the form of JSC "Shipbuilding Corporation" Ak Bars "(SKAB) through a "laying" in the form of B.E. Butoma Shipbuilding Plant JSC (existing at the same address as Zaliv Shipbuilding Plant LLC). Therefore, the construction of three out of five SMSs ordered under this contract is being carried out in Kerch All five SMSs ordered by Zelenodolsk are equipped with Pantsir-M air defense systems.

The lead Zelenodolsk SMS of project 22800 under this contract Cyclone (serial number 801) was laid down without much publicity at the Zaliv shipyard in Kerch on July 26, 2016 and launched on July 24, 2020. Factory sea trials of the Cyclone were launched in Novorossiysk at the end of November 2021, but the ship has not yet completed the tests, although it is unofficially stated that this SMS will be handed over to the fleet by the end of 2022.

Also in Kerch, the construction of the third SMS "Amur" (serial number 803), laid down on July 30, 2017, is underway. The contract deadlines for the delivery of these three Kerch ships were 2019-2020, but they significantly went "to the right."

On February 26, 2019, the Tucha SMS (serial number 804) was laid down at the Zelenodolsk Shipyard, which became the first ship of Project 22800, which is actually being built in Zelenodolsk. September 11, 2019 in Zelenodolsk was laid the same type of SMS "Typhoon" (serial number 805). The contract deadline for the delivery of ships with serial numbers 804 and 805 was 2021, however, apparently, in reality this will not happen before 2024. 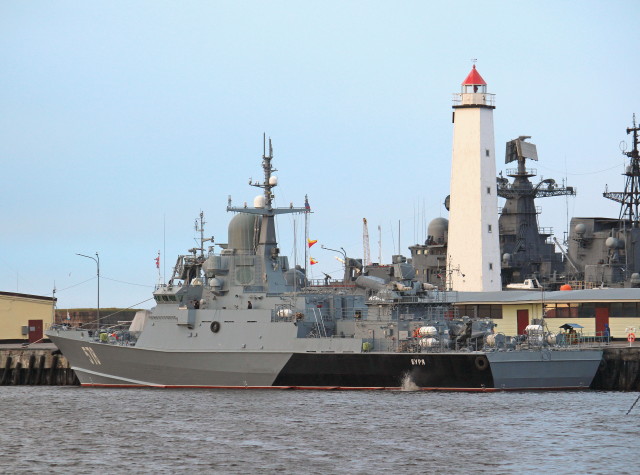 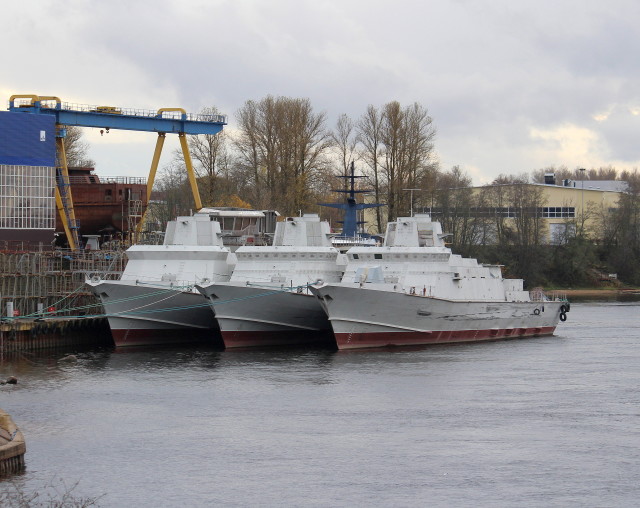 In 2023, Amur shipyard will launch the first Karakurt for the Pacific Fleet

The shipbuilders of the Amur Shipbuilding Plant began to present to the regulatory authorities the finished structures of block sections of the hull of the project 22800 small missile ship "Rzhev" under construction (code "Karakurt"). This was announced on Friday, November 18, in the press service of the enterprise. 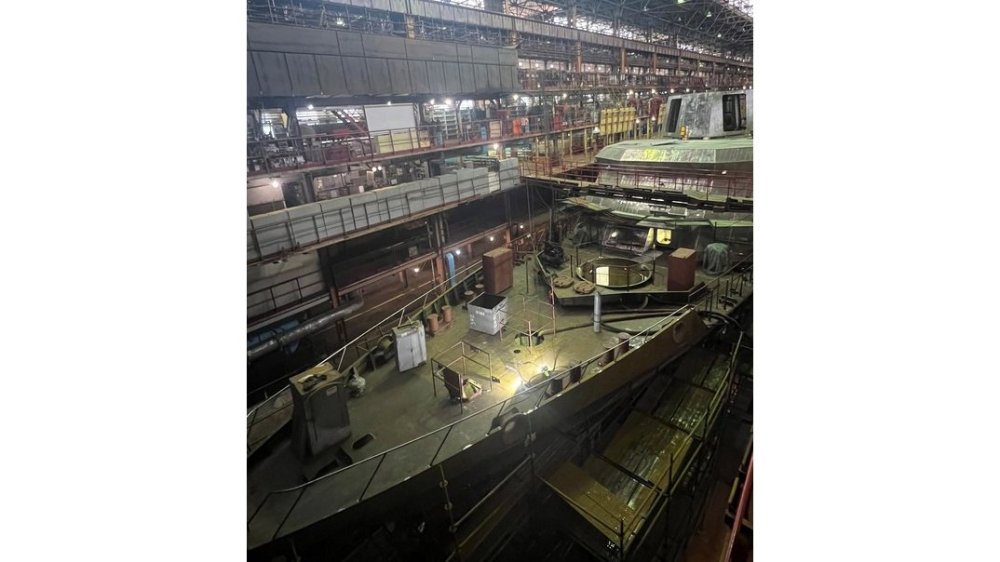 As Evgeny Ionin, senior builder of the factory order, said, the main propulsion equipment was loaded on small missile ship, work is underway to manufacture and install pipelines for the OCS and power plant systems. Air conditioners and fans are installed, in full - electric compressors, equipment of the main switchboard, thruster.
In addition, the specialists of the Amur Shipbuilding Plant (ASZ) are working on the manufacture and installation of fittings, foundations for the order under construction.

The work on the manufacture and installation of the superstructure, the BMK section has been completed - welding and straightening of structures are underway.

The work is moving in accordance with the construction schedule, the press service of the ASZ stressed. In 2023, the factory workers will have to take the ship out of the workshop and launch it for completion afloat.

Rzhev is the first Project 22800 RTO being built by ASZ for the Pacific Fleet. It was laid down in July 2019. In total, the shipyard must transfer four such ships to the Navy.

These ships are more than necessary. However they certainly took their own sweet time with this. I do not know if there were delays with the engines or whatever. But Pella launched the ships after 2 years. Amur shipyard is going to take 4 years at best. This is god awful slow.

It also seems like poor use of available facilities. JSC Vostochnaya Verf has good enough facilities to built these ships and is presently working at half gas. While Amur shipyard could be building larger corvettes or frigates instead. Right now Amur can build a Project 20380 corvette as fast as these ships.

The Amur Shipyard is likely to build the 22350 frigates.

Arrow wrote:The Amur Shipyard is likely to build the 22350 frigates.

They are building 22800 series as well

In any case i am glad to see Tsiklon, Askold and Burya completing trials soon

Now Shtorm (Kozelsk), Okhotsk , and Vikhr must be completed-

I saw pictures of them lined up next to each other waiting for engines, once they get powerplant on them I'd like to see them also in trials

Then Zaliv, Amur and Zelenodolsk can finish the rest of these - hopefully m507 will be produced in serial numbers by the time those hulls are completed
lancelot

Arrow wrote:The Amur Shipyard is likely to build the 22350 frigates.

I would just make Amur Shipyard focus on building Project 20380/20385. That way Severnaya Verf would focus on just Project 22350.
I think it is better for each shipyard to focus on a single ship class as much as possible.

Project 22800 (Karakurt) can be built at Zaliv, Pella, Zelenodolsk, and Vostochnaya Verf.

would just make Amur Shipyard focus on building Project 20380/20385. That way Severnaya Verf would focus on just Project 22350. I think it is better for each shipyard to focus on a single ship class as much as possible. wrote: