the Brazilians were still reeling from the German blitzkrieg...  The first pantsir will be stationed in front of the Brazilian goal...

That's the punishment they get for not including Kaka, Robinho, and Ronaldhino on the team!
TheArmenian

Brazil will receive helicopters Mi-35M by the end of the year
Under the contract, Russia must pass the South American partner 12 cars 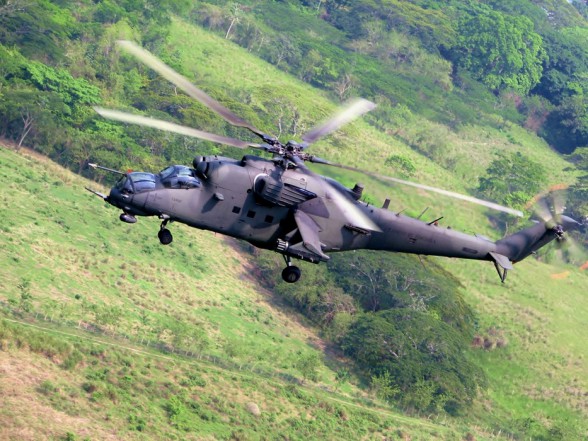 Deputy General Director of "Rosoboronexport" Sergei Goreslavsky exhibition Africa Aerospace and Defence 2014 reported that Russia will complete the delivery of Mi-35 helicopters in Brazil until the end of the year.

"With regard to the negotiations with the Brazilian side, they were the next step in the promotion of" armor-S "in Brazil and the actual completion of the supply of helicopters to Brazil. I'm talking about completion as agreed timing of delivery of the last batch of the contract for the Mi-35. Until the end of the year will take place on delivery, and, accordingly, we realize that the contract that was signed in 2008, "- said Sergey Goreslavsky.

Deputy General Director of "Rosoboronexport" also pointed out that at the exhibition the company held their first talks in a trilateral format (Russia, Brazil, South Africa) on the implementation of plans to create a joint product in the field of aeronautical defeat adapted to the aircraft "Grippin" who bought South Africa and Brazil .

At the end of 2015 in Brazil will create a Center for repair and maintenance of Mi-35M.

Service centers are already operating holding company in the EU, CIS, Latin America, Asia and Africa. In August, "Russian Helicopters" in Brazil have authorized service center Helipark Taxi Aereo, which will contribute to the successful operation of helicopters Ka-32 in South America.

Russia completed the delivery of Mi-35 helicopters in Brazil
pampa14

I share with you, photos of Mil Mi-35M, FAB designated AH-2 Sabre.

The Brazilian Air Force ordered 12 helicopters, based in Porto Velho AB, in service with 2nd Squadron of 8th Aviation Group.

More informations and a lot of photos can de found here:

Nice, thanks for the pictures.
If you find some post of the interior or maybe during exercises, would appreciate it.

No confirmation from the Brazilian press yet, but anyway, better get the news from the Russian media, 'cause the Brazilian one is completly anti-Russian.

And what is the amount of Attack helicopters they need?

My guess would be due the size of Brazil they would need higher range, but also a relative tight budget. Ka-52 would be less likely due the co-axial complexity which needs a very strict and some degree more expensive maintenance and resupply of spare parts, the A-129, well not really meeting any requirements for the past useage of attack Helicopters Brazil had operated (Mi-35) and Mi-28N would be the best choice, easier and already established maintenance personal and resupply which already have experience with Mil helicopters, the Tiger would just to cost intensive without any great aspects in comperision to any other competitor except in flight range.
medo

It will depend on what kind of Helicopter Brazil will need. They already have a squadron of Mi-35, which is combination of transport and attack helicopter, what id fine to use with SF teams. Maybe next helicopter will be more classical attack helicopter and in that case they will chose between European ones and Mi-28N. Ka-52 is something special and Russian military classify it as recce helicopter, but when you compare Ka-52 with Mi-28N is like comparing Su-34 with Su-25SM. Ka-52 is practically a fighter-bomber between helicopters with full ESM equipment, EO complex and radar, also it carry more powerful armament with heavier missiles (Kh-31A/P with Ka-52K). With Ka-52 Brazil could get excellent maritime helicopter suited for use on their aircraft carrier. It will be more clear, when Brazil will give more clear specifications about new helicopter.

The potential deal includes the purchase of three Pantsir-S1 air defense batteries (up to 18 units) and is estimated at $1 billion.

MOSCOW, January 28 (Sputnik) – Brazil and Russia could sign a contract on the delivery of Russian Pantsir-S1 air defense systems to the Latin American country as early as in the first half of 2015, Brazilian Ambassador to Russia Antonio José Vallim Guerreiro said on Wednesday.

“We hope very much that the contract will be signed this semester because the discussions are very advanced… Signing the contract is going to be a very important achievement,” Guerreiro said in an exclusive interview with RIA Novosti.

The potential arms purchase by Brazil, which includes three Pantsir-S1 batteries of up to 18 units, is estimated at $1 billion, according to Russia's Kommersant business daily.

The Pantsir-S1, produced by Russia's KBP, is a short-to-medium gun-missile system combining a wheeled vehicle mounting a fire-control radar and electro-optical sensor, two 30-mm cannons and up to 12 57E6 radio-command guided short-range missiles. The system is designed to destroy a variety of airborne targets at altitudes from 5 meters (16.4 feet) to 10 kilometers (32,800 ft) at a range of 200 meters (656 ft) to 20 kilometers (65,617 ft).

The Stockholm International Peace Research Institute's (SIPRI) December 2014 report revealed that contrary to global declines in arms sales, Russian arms trade has seen an uptick in comparison to 2013. According to SIPRI, Russian shipments in 2014 accounted for 27 percent of global arms exports.

In July 2014, Russian President Vladimir Putin said that foreign orders have grown to nearly $50 billion from $35 billion earlier in the year.

I had heard that MBDA-UK was pushing a CAMM solution (already ordered by BR Navy), sounds like they were not successful...
I wonder if that was based on performance/cost, or was local production/ future JV in upgrades to Pantsir agreed..???
(not to mention poitical aspect)
George1

Contract for delivery of Pantsir-S1 systems to Brazil may be signed this year
Russian Aviaton » Friday March 13, 2015 11:30 MSK

Contract for delivery of Pantsir-S1 air defense systems to Brazil should be signed in 2015, TASS reports with reference to Rosoboronexport Deputy CEO Sergey Goreslavskiy.

He noted that Russia and Brazil are negotiating deliveries of integrated defense systems and Pantsir-S1 is one of the system’s major components. “We hope to sign the contract for delivery of Pantsir systems to the country this year,” he said at Echo of Moscow radio station.

According to Goreslavskiy, integrated defense system is the new product offered by Rosoboronexport at the global market. It is derived from the system used for provision of safety at Sochi-2014 Olympic Games. It comprises air defense systems and “safe city” system. “We are cooperating with Brazil in this area,” he said adding that this Latin American country will host the Summer Olympics in 2016.

Goreslavskiy noted that the prototype would be able to perform flights. He added that in 2015 Russia and India would start development of design documentation in the network of this project.

Goreslavskiy reminded that Russia is considering the possibility of starting a mass production of Ka-226 helicopter in India. Moreover, the countries are developing a new multi-role transport aircraft - МТА (Multi-Role Transport Aircraft).
Viktor

Due to financial reasons, Brazil's Pantsir-S1 deal with Russia will hardly be concluded before the Olympic Games in Rio de Janeiro in 2016, said Jacques Wagner, recently appointed Brazilian Minister of Defense, during his unconfortable (to say the least) visit to Moscow for the Victory Day Parade on behalf of President Mrs. Dilma Rousseff. It should be kept in mind that on May 9 Mrs. Rousseff overtly snubbed the Parade when, instead, she attended her physician's wedding party in Brasilia, sending Mr. Wagner to the Moscow's solemnities. Mrs. Rousseff is due to visit Washington on June 30.
GarryB

Mrs. Rousseff is due to visit Washington on June 30.

Her manicurist gets married that day... I wonder if she will attend the wedding or visit Washington... ?
Kyo

Mrs. Rousseff is due to visit Washington on June 30.

She's been warned by the military of a hypothetical attack on the huge Brazilian offshore oil deposits by swarms of Tomahawks. So that's what Pantsir-S1 was supposed to defend. Apparently, she deems less costly to have good relationships with Washington than to spend on Russian SAMs. Yet the deals with Sweden on Gripen and with France on Scorpene subs are both plain sailing.

So you are saying that Brazil more or less folded?
Kyo

sepheronx wrote:So you are saying that Brazil more or less folded?

Yep, at least for the next 4 years, Mrs. Rousseff's term. However, she's totally unpredictable.
George1

MOSCOW (Sputnik) – Brazil is apt to purchase Russian Pantsir air defense systems as early as in the first half of 2016, Brazilian Ambassador to Russia Jose Vallim Guerreiro said.

“A general decision on the purchase has been made…As far as I know, the deal is expected in the first half of 2016,” Guerreiro told RIA Novosti.

In a January interview with RIA Novosti the ambassador had suggested that the contract on the delivery of Russian Pantsir-S1 air defense systems to the Latin American country could be signed in the beginning of 2015.

Guerreiro explained that this delay was mainly because “the 2015 budget did not provide enough financial resources to pay for armaments.”

He added that the work is currently underway to include a corresponding provision in the 2016 budget.

The two countries launched negotiations on Pantsir deliveries in 2012.

The Pantsir-S1 (NATO reporting name SA-22 Greyhound), is a short-to-medium range gun-missile system combining a wheeled vehicle mounting a fire-control radar and electro-optical sensor, two 30-mm cannons and up to 12 57E6 radio-command guided short-range missiles. The system is designed to acquire a variety of targets flying at altitudes from five meters to 10 kilometers and at the range from 200 meters to 20 kilometers.

I distrust all these continual affirmations of intent.
Money talks - not diplomats.

What's the bet that the Brazillians will ultimately rein in on this deal for some crumbs from Washington instead?
Sponsored content