RIO DE JANEIRO, April 14. /TASS/. Russia seeks to strengthen its positions on the arms market of Latin America, with talks with delegations from seven Latin American countries expected at LAAD 2015 Defense and Security International Exhibition opening in Brazil on Tuesday.

According to the Federal Service for Military-Technical Cooperation, 17 Russian enterprises will present their military products at the exhibition. All in all, visitors and specialists will be able to see almost 670 Russian military products presented as models, mockups and other promotional materials.
George1

According to Rostec, the Latin American market for Russian helicopters is quite large and the region has great potential for trade with Russia, especially in the manufacturing sector.

"Some 20 percent of helicopter market in the countries south of the Rio Grande river [in Mexico] is comprised of Russian equipment," Kladov told Russia's Kommersant newspaper.

He noted that the company's share in the civil helicopters market was, by contrast, much smaller, and amounted only to 2 percent.

"But we are trying to improve the situation – we have launched a large marketing campaign," Kladov said.

He noted that Rostec was ready to cooperate as closely with its Latin American partners as possible and was open for joint work in different formats.

According to Rostec's website, Argentina, Brazil, Venezuela, Colombia, Mexico and Chile have the greatest potential for foreign trade and cooperation with the Russian company.

The company says it is in talks with regional partners for joint projects in high-tech development and manufacturing.

According to Russia’s delegation of the state arms exporter Rosoboronexport, Russia is consolidating its positions on the Latin American arms market.

LIMA (Sputnik) – Russia is consolidating its positions on the Latin American arms market, despite the strong presence of Western countries in the region, the head of Russia’s delegation of the state arms exporter Rosoboronexport to the weapons exhibition in Lima said.

“Rosoboronexport is consistently strengthening its positions in Latin American countries. Positions of our competitors are very solid, which makes process difficult. But a tendency toward closer ties in defense is obvious,” Sergei Ladygin said.

The delegation head explained that Russia and Latin America have common views on key geopolitical issues and mutual interest in expanding cooperation in trade, science and industry.

“If we speak specifically about certain types of weapons, the most promising segment of the Latin American market is aviation, especially helicopters. This is followed by armament, ground force equipment, and various kinds of air defense systems,” Ladygin said.

Russia is actively expanding military cooperation with Latin American countries, including arms sales, construction of naval maintenance and resupply facilities, and the occasional use of local airbases to host Russian strategic bombers on global patrol missions.

Several Latin American countries have also shown potential for cooperating with Russia on high-tech development and manufacturing. Argentina, Brazil, Venezuela, Colombia, Mexico and Chile are among the countries that have declared an interest in developing foreign trade and cooperation with Russia, according to the Russian state technology company Rostec.

Russian arms exporter Rosoboronexport is currently working on the creation of helicopter service centers in Brazil, Venezuela, Colombia and Peru.

MOSCOW (Sputnik) — Russian arms exporter Rosoboronexport is working on the establishment of the full-fledged system of aftersales service in Latin America, the head of Rosoboronexport's delegation to the weapons exhibition in Santiago said.

"Building up an effective system of aftersales service for Russian military equipment is one of the priorities of Rosoboronexport. It applies not only to helicopters, but to all the military and dual-purpose production. We are actively working in this direction and in the coming years expect to achieve results," Sergei Ladygin told RIA Novosti.

He added that at the moment Rosoboronexport was working on the creation of helicopter service centers in Brazil, Venezuela, Colombia and Peru.

Last month, Rosoboronexport Director General Anatoly Isaykin said Russia offered Peru the option to purchase a mobile service center to maintain the high operational readiness of its recently received Mi-171Sh military transport helicopters while the construction of a permanent service center in the country is underway.

Over 400 Russian helicopters are currently being operated in Latin America and the Caribbean. The most popular models are those of the Mi-8/17 series, amounting to 320 units.

Rosoboronexport will demonstrate advanced Russian military production at FIDAE 2016 trade exhibition to be held on March 29 — April 3 in the Chilean capital Santiago.

It could be an excellent option for Argentina, which needs to build its air force from scratch, but has no money at the moment for true fighters. It would allow pilots and technicians to acquire experience with handling a sophisticated aircraft (the most advanced plane Argentina ever operated were A-4 modernized in the 90's with APG-66 radar) and prepare them to operate advanced multirole fighters when there are resources available. As its most likely adversary is a NATO member (UK), it would be wise for Argentina not to acquire more military equipment from the West. But I really don't think the current president, as all other presidents before since 1983, cares about defence issues, and if he ever decides to buy new planes it will likely be old modernized like Israeli IAI Kfir or Spanish Mirage F-1.
Benya

Russia has been paying great attention to strengthening its positions on the arms market in Latin American countries, Alexander Denisov, head of the Marketing Activity Department at Russia’s arms exporter Rosoboronexport, said. 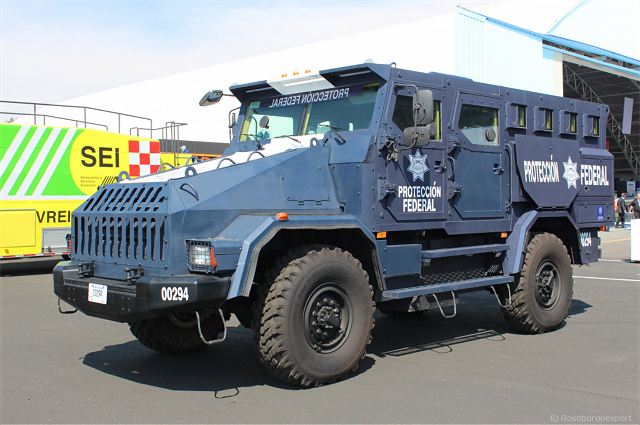 The Russian-made Gorets-M 4x4 at FAMEX 2017 Defense Aerospace Exhibition in Mexico, this vehicle is now in service with the Police of Mexico.
Denisov is the head of Rosoboronexport’s delegation at the FAMEX 2017 international aerospace exhibition being held at airbase No. 1 in Santa Lucia in Mexico.

"Rosoboronexport cooperates with almost all Latin American countries. Russia does its best to strengthen its positions on the market, offering not only contracts for ready-made systems, as many other countries do, but also after-sales maintenance, spare parts and repair. Russia is also offering to train Latin American personnel to operate, service, upgrade and even produce hi-tech military hardware under license," Denisov said.

In addition to Rosoboronexport, Russia’s state hi-tech corporation Rostec, Russian Helicopters Group and Irkut Corporation are taking part in the FAMEX 2017 exhibition. The exhibition in Mexico is being attended by more than 500 companies from dozen countries.

According to Denisov, this has shown that "Russia is gradually strengthening military and technical cooperation" with Latin American countries.

The successful performance of Russia’s air task force in the counterterrorist operation in Syria has aroused interest in many military hardware items.

Rosoboronexport has displayed more than 160 items of Russian-made military hardware, including the full-scale examples of the Mil Mi-17 (NATO reporting name: Hip) helicopter in service with the Mexican armed forces and the Gorets-M armored vehicle manufactured by Russia’s Special Hardware Research Institute. In early March, the Gorets-M vehicle was delivered to Mexico’s Federal Protection Service for temporary use.

MOSCOW, December 10. /TASS/. A center for the maintenance and repairs of Russian-made Mil Mi helicopters has opened in the Peruvian capital of Lima with the support of Russian Helicopters Group, the rotorcraft maker’s press office reported on Monday.

"The Helicentro Peru center for the maintenance and repairs of Russian-made helicopters has begun its work on the basis of the Peruvian Air Force Maintenance Service (SEMAN) in the city of Lima. The Center has been set up with the participation of Russian Helicopters Group (part of the state hi-tech corporation Rostec) and will deal with the maintenance of Mi helicopters," the press office said in a statement.

"Although the Center has just begun its work, it is provided with orders until 2023: in the next five years, the repairs of about 40 helicopters are planned. Besides, Peru’s advantageous geographical position and the production capacity reserve make it possible to consider also orders from other countries of the region," the press office quoted Russian Helicopters Group CEO Andrei Boginsky as saying.

Mi-8/17 helicopters developed by the Mil Design Bureau are well-known in the world as reliable and easy-to-operate rotorcraft. They are used in medical-sanitary and humanitarian missions, cargo and passenger carriages, including VIP transportations. Mi-8/17 military transport helicopters are designated for carrying personnel, and also cargoes inside the cabin and on an external sling.

"There is a great interest in purchasing Russian military equipment, including aviation equipment, and in services. A [joint] commission is operating, and we hope that technology transfer will bring good results", Morales said, when asked whether the country sought to acquire Russian weapons. "Last year we stopped using T-33 jet trainers, and now the Air Force asks me to replace them with Russian aircraft. Much will depend on the technical aspect, but there is great trust [in Russian military equipment]. There are many Russian aircraft in Latin America. Everything will depend on the work of the relevant commission", Morales added.