Hole wrote:This are not engineer vehicles, they are heavy flamethrowers and belong to the "chemical troops" which are part of the NBC protection service.

The TOS-1 was developed for infantry support in mountainous and urban areas.

Actually both a minefield remover and fire support weapon.

You can remove mines with everything. Even a shovel. Or your mother-in-law.

Still, a single guy with an atgm will take it out easily from 4km away while he won't be detected.

So a Russian Armoured division is rolling along and gets to a location where there are enemy bunkers with the front covered in anti tank mines and they start taking fire... so they stop and back up a bit while returning fire and the TOS is called up to pummel the mine field and the bunkers... these are ballistic rockets... their range is not enormous but they don't need to have direct line of sight to the target area... they could fire from behind cover... from behind a line of actual tanks with APS systems and ERA designed to take an ATGM hit from the front.... the TOS vehicles would fire and then depart.


This are not engineer vehicles, they are heavy flamethrowers and belong to the "chemical troops" which are part of the NBC protection service.

They are fire support vehicles intended to breach heavy defences or enemies in trenches or minefields.

They are based on tanks to operate in the front lines but wont be operating on their own...


The TOS-1 was developed for infantry support in mountainous and urban areas.

It does not have the rocket range to operate in the mountains effectively, and its use in urban areas would be considered a war crime by most.


Before it was used more in a direct fire support role, ie. a infantry unit entered a city and a TOS unit waited outside the city limits to fire salvos into enemy held building. The range of the old missiles was sufficient for that.

It would not be accurate enough to hit specific buildings, and certainly would not be safe to fire in urban combat where the target building could be surrounded by friendly held buildings...


The arm calls it "wheel of fire" (or something similar), first a unit of Tornado-G fires a salvo, then leaves his position, in the meantime the TOS unit fires a salvo. I guess that´s why the new missiles got larger range.

Which clearly shows it is used to kill people under cover... the first salvo of rockets is the most effective because by the time a second salvo arrives any survivors will have taken cover and would need direct hits to injure or kill. Having a second salvo of thermobaric rockets means even under concrete protection you will still kill...


You can remove mines with everything. Even a shovel. Or your mother-in-law.

TOS operates with armoured units... any enemy worth their salt will have machine gun and sniper and anti armour weapons covering their minefields both to get more kills and to make it more costly and dangerous for the enemy. Sending troops to clear mines will just get them shot.... a quick volley of TOS to clear out the majority of mines and then columns of tanks with the front few fitted with mine rollers and mine ploughs and probably these days a few anti mine robot vehicles means you can cross a barrier the enemy previously thought was a successful block.

They would likely set up anti tank missiles and guns to shoot at the soft flanks of tanks driving down the boundaries of the minefield to find a gap, and of course any actual gaps in the minefields will be dead end traps to line up your vehicles for destruction by hidden ATGMs and your own armour.
By using TOS you can choose where you cross and therefore get surprise against an enemy whose defences likely were set up assuming you couldn't just drive through there like you just did... which puts him on the back foot.

Hole wrote:You can remove mines with everything. Even a shovel. Or your mother-in-law.

however the ex would do just fine

It was used in Afghanistan and Chechniya and not to clear mines. In Grozny it was used to hit single buildings so his accuracy seems to be good enough. And no, no enemy will protect his minefield with snipers or machine guns. In all of history of warfare this "tactic" was never implemented because the purpose of minefields is to stop an enemy without using manpower.
GarryB

In all of history of warfare this "tactic" was never implemented because the purpose of minefields is to stop an enemy without using manpower.

You are joking are you not?

Minefields never stop enemies... coming across a minefield will just slow an enemy, in some cases minefields are simply driven over in columns with the commanders considering the loses equivalent to covering open terrain under fire... in  other words if they stopped to manually clear the mines they would lose a lot more vehicles and also waste a lot of time.

Minefields were often set to block but were also set to channel... in places in belarus in the marshes the only way to get from point a to point b was on a road... the ground either side of the road was too soft and your vehicles would get stuck almost immediately.

The Soviets were experts at minefields they would set up anti tank guns to fire on tanks traveling up and down minefields looking for gaps... anti tank guns being most effective hitting the sides of tanks obviously...

Often the germans would mark gaps in their minefields with anti tank guns guarding the corridors, so friendly armour could drive through but enemy armour would be fired on driving down the narrow corridors.

These days it would not be hard to do the same with ATGM positions and the options are even greater with roadside mines that attack the sides of tanks as well.

They were used in Afghanistan to try to deal with the extensive cave systems the Afghans used...

BTW are you trying to suggest there were no mines in Afghanistan or Chechnia?

The newest heavy flame-throwing system TOS-2 ("Tosochka") went to the troops. According to the Ministry of Defense, the first vehicles were received by the Central Military District.

The new flamethrower system entered service with the mobile units of the RHBZ Central Military District, stationed in the Saratov region. According to the report, the equipment arrived at the end of 2020, the number of delivered copies was not reported.


(...) TOS-2 heavy flamethrower systems have been delivered to the mobile RCB protection units stationed in the Saratov region

The fact that the TOS-2 flamethrower system will go to the troops at the end of 2020 was announced by Russian Defense Minister Sergei Shoigu on the eve of the Caucasus-2020 exercises, where this system was to be tested in conditions close to combat. At the same time, the head of Rostec, Sergei Chemezov, said that Tosochka was completing the tests.

The TOS-2 heavy flame-throwing system was created on the basis of the TOS-1 "Buratino" and TOS-1A "Solntsepek", but in contrast to them it has a wheelbase and improved tactical and technical characteristics. Earlier it was reported about the creation of new ammunition for TOS-2. The machine was created taking into account the experience of using such weapons during the hostilities in the Middle East.

TOS-2 in the future will replace TOS-1 and TOS-1A, but track-mounted flamethrower systems will not be removed from service, but will be modernized. The modernized vehicles will receive modern digital communication facilities, as well as equipment for a closed data transmission segment, which will allow them to be integrated into automatic control systems (ACS) of the tactical level. In addition, long-range ammunition from TOS-1 will be adapted for TOS-1 and TOS-2A, thereby increasing their range to 15 km instead of the currently available 6 km.

Earlier, the Ministry of Defense said that by 2025 TOS-2 will replace all TOS-1 and TOS-1A in the Southern Military District. Tracked TPS will remain in service with the RChBZ troops in other regions where the use of wheeled vehicles is impractical.

Omsktransmash handed over to the Ministry of Defense TOS-1A flamethrower systems with improved reactive armor.

The Omsk Plant of Transport Engineering (part of the Uralvagonzavod concern of the Rostec State Corporation) handed over to the Ministry of Defense of the Russian Federation a batch of TOS-1A "Solntsepek" heavy flamethrower systems with improved reactive armor. This was reported to journalists on Friday in the press service of the enterprise.

"TOS-1A heavy flamethrower systems, manufactured by Omsktransmash, were transferred to the Ministry of Defense of Russia as part of the execution of the state defense order. In the near future, they will enter the troops" – the press service informed.

As the company noted, the new systems are distinguished by a number of improvements. "The new batch also has an improved built-in reactive armor, GPS/Glonass navigation system for determining the location of the car, the position above sea level, the exact coordinates and time. In addition, the equipment is equipped with tracks of a new modification - with a direct ground hook" – the press service reported. 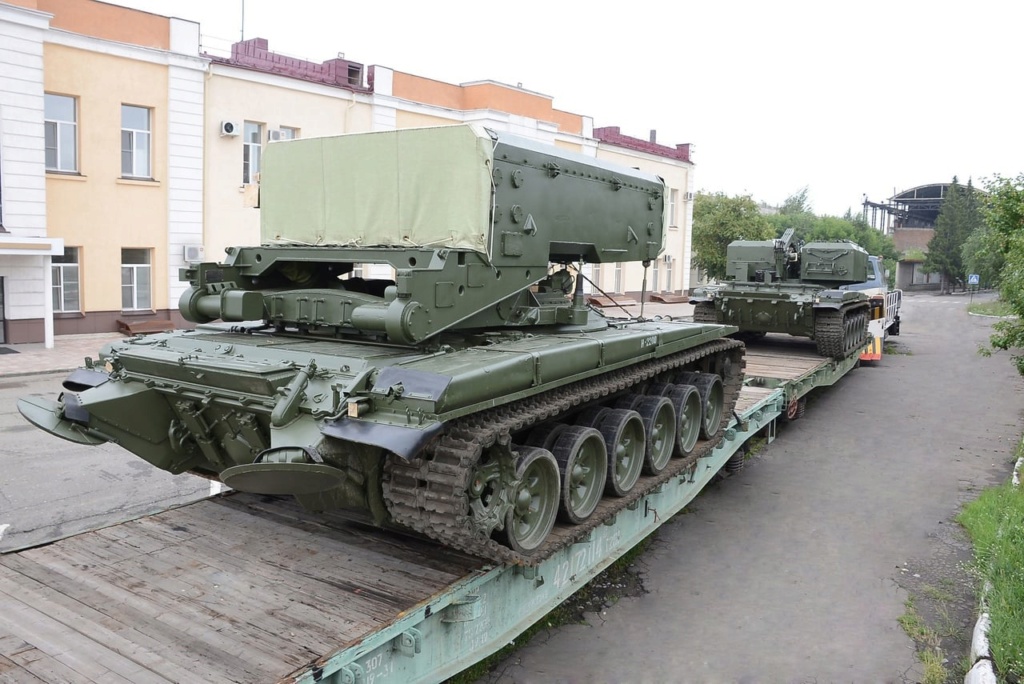 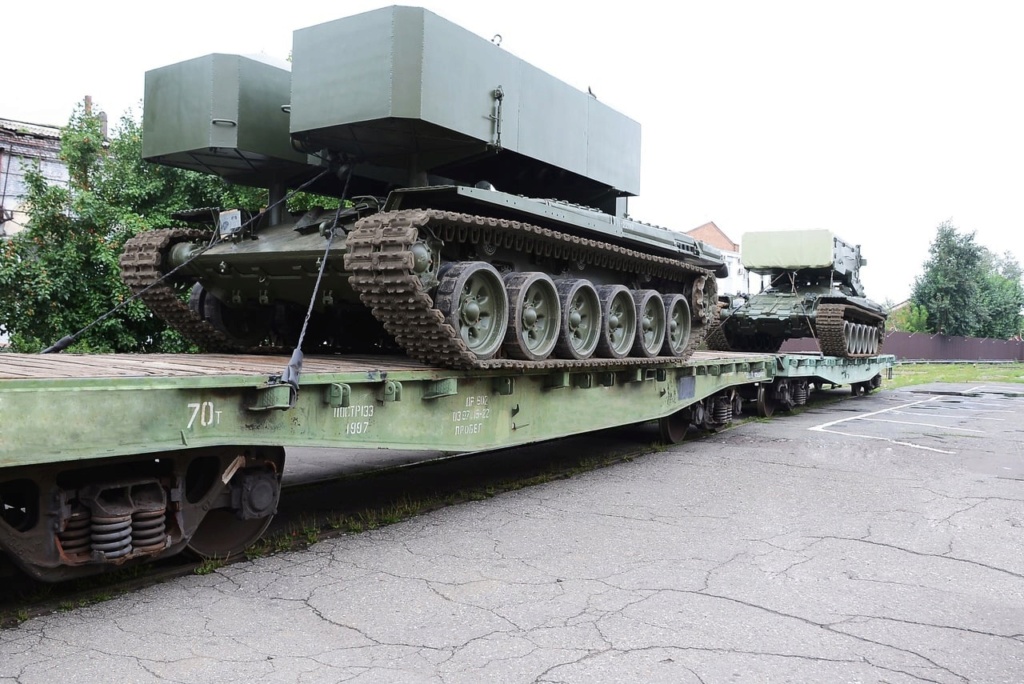 So they are going to keep all the TOS systems in service and use up the old 6km range rockets and only produce the new 15km range rockets for the old tracked tank based vehicles which they will upgrade and the new wheeled vehicles.

Earlier, the Russian army used against Ukrainian units in the Donbass TOS-1A "Solncepek" 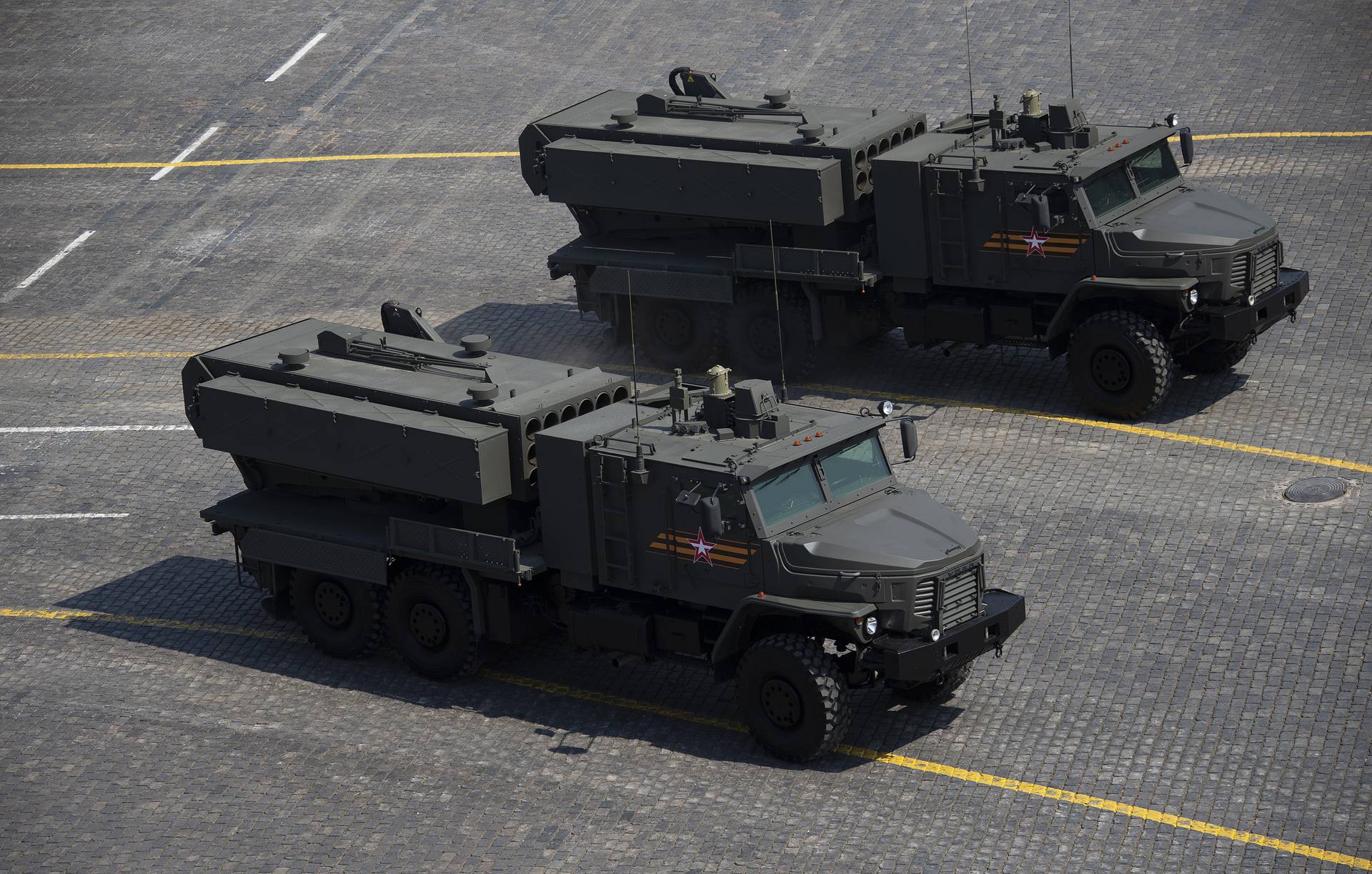 MOSCOW, May 28. / TASS /. The Russian military used the latest heavy TOS-2 "Tosochka" flamethrower system during a special operation in Ukraine. This was reported to TASS by a source in the security forces. "TOS-2 systems were used in the Kharkоv direction," the agency's interlocutor said.

According to him, in the special operation in Ukraine, the Armed Forces of the Russian Federation "run in" many military innovations.

TASS has no official confirmation of this information.
Earlier on the Internet it was possible to see only video frames of effective application in Donbass TOS-1A "Solncepek" against the Ukrainian divisions.

TOS-2 "Tosochka" is the "successor" of the heavy fireworks system TOS-1A "Solncepek" with improved tactical and technical characteristics. Unlike its predecessor, it is made on the basis of the car "Ural" with increased load capacity and cross-country. Has an increased range of unmanned rocket launchers. Aiming, firing and fire control TOS-2 are fully automated.
A crane-manipulator is mounted on the machine, therefore the system does not need a transport-loading machine. In addition, the TOS-2 has a system of electronic protection against high-precision weapons.

The Russian military first used TOS-2 during the main stage of the Caucasus 2020 strategic exercise at the Kapustin Yar test site in the Astrakhan region. 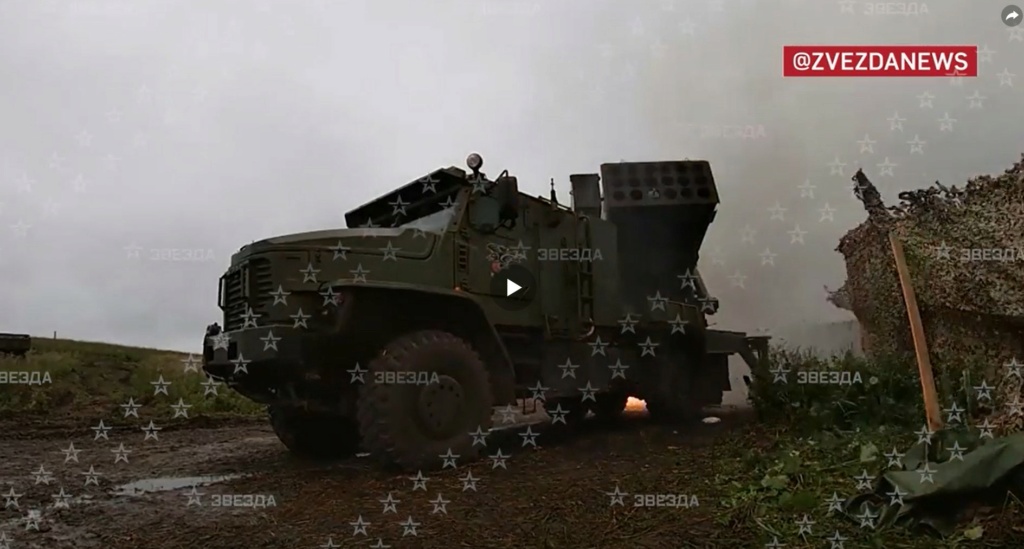 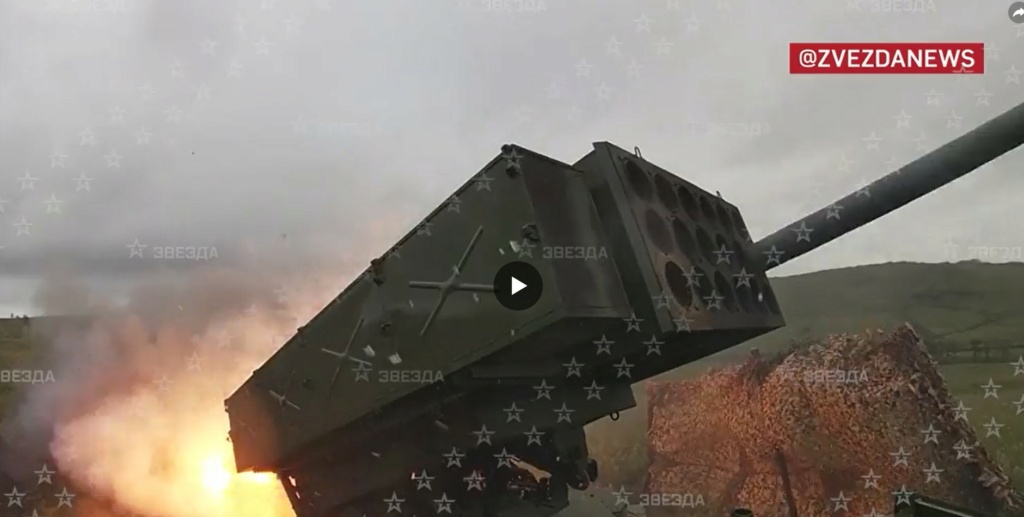