Recent excercise with TOS-1 and BM-21

Russia will develop new generation of flamethrower designated as Tosochka in 2017. 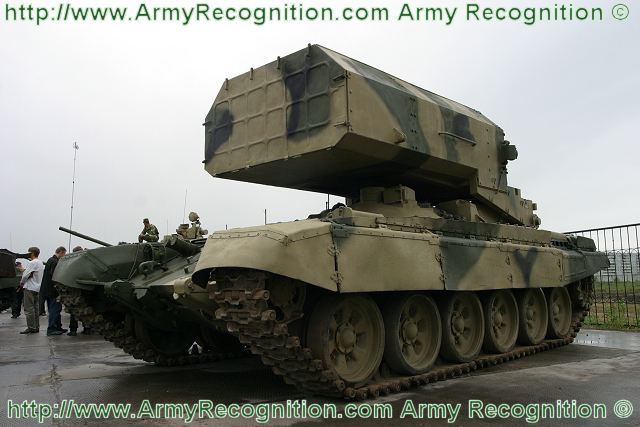 TOS-1 Russian-made 220mm heavy flame thrower system
"We are expected to complete the development work on the promising flamethrower system in 2017 and I hope that the system will be serial-produced after it passes state trials. This development work is designated as Tosochka," Borisov said.

The TOS-1 heavy flame thrower system is a 220mm 30-barrel multiple rocket launcher system which can fire rockets with thermobaric or incendiary warheads. The Russian development of the TOS-1 began in the late 1980s. Heavy flamethrower system TOS-1 was designed and created by the beginning of the 1980s.

The TOS-1 fires 220mm unguided rockets with a mimum range of 600 m and a maximum range of 4,000 m. All the rocket can be fired at the same time in 6 seconds maximum. The zone of ensured destruction from a Buratino salvo is 200 x 400 meters.

I also hope that they will double its range to become unreachable by enemy ATGMs, since if anything hits the rocket container on the top of the vehicle, it will cause an explosion so big that the crew would have zero chance to survive.

In this video, a TOS-1 Buratino can be seen being blown into smithereens by a Syrian rebel ATGM.

A brand-new heavy flame-throwing system will enter service with the Russian Armed Forces in the next few years.

The Russian Armed Forces is due to get the advanced heavy flame-throwing system Tosochka which will replace the TOS-1A Solntsepyok (Sunheat) heavy flamethrower currently in service.

RIA Novosti quoted Nikolai Makarovets, chief designer of the Russian research and production association Splav, as saying that the Tosochka heavy flamethrower will be delivered in line with Russia's state armaments program for 2018-2025. Splav is dealing with the development of the Tosochka systems.

"This is the development of the Solntsepyok project and unlike Solntsepyok, the new system will be equipped with a wheeled chassis. Experience of operating heavy flamethrowers in desert areas has indicated wheeled chassis are the best option," Makarovets during the ongoing MAKS-2017 airshow.

In an interview with Sputnik, Russian military expert Viktor Murakhovsky specifically focused on characteristics of the Tosochka system.

Referring to Solntsepyok, he recalled that "the heavy flame-throwing system was first mounted on the chassis of the T-72 battle tank and then – on the T-90 tank's chassis."

"The main elements of the TOS system include a transport launch canister which contains an unguided rocket equipped with a warhead with a flamethrower-incendiary mixture. There is another option, with a thermobaric warhead which is related to the so-called vacuum ammunition," Murakhovsky said.

He added that "the next stage of the development of this system stipulates increasing the range of fire and equipping the system with corrected projectiles which hit the target more accurately and effectively."

According to him, the Tosochka flame-throwing system can be mounted on the sophisticated Armata tracked vehicle platform.

"Also on the table is the option that one of the vehicles of the Armata family — a new generation of Russian armored vehicles — will also be used as a chassis for the new heavy flame-throwing system," Murakhovsky said.

He noted that the heavy flame-throwing systems are widely used in the fight against terrorists.

"For example, the Iraqi Armed Forces used them during the liberation of Mosul, and these systems were also seen in Syria," Murakhovsky concluded.

The TOS-1A Solntsepyok, in turn, is an upgraded version of the TOS-1 Buratino heavy flame-throwing system which underwent its first combat tests in Afghanistan in 1988-1989.

In his article for the National Interest last year, defense analyst Sebastien Roblin described the TOS-1 as one of "the most devastating explosive weapons short of tactical nuclear weapons."

The current effective firing range of the TOS-1A system is about six kilometers. The new shell is expected to increase the new Tosochka flame-throwing system's range to ten kilometers, that is, by 40 percent. The improved range is expected to be achieved in part via a new fuel/explosive mixture inside the shell.

OmskTransmash has undertaken a "large-scale" overhaul and modernization program of TOS-1A MRLS for the Russian MoD. First batch of modernized TOS-1A MRL systems will be handed over to the MoD by the end of November 2017.

"Changes have affected both the appearance and internal equipment of combat vehicles. At TOS-1A modern power plant and dynamic protection are installed. Heavy flamethrower received a new launcher, and the transport-loading machine of the complex - a crane."

I hope that the reloading method has been improved. It's so much faster to be able to replace an entire rocket pack instead of loading them one by one.
d_taddei2

Interlinked wrote:"Changes have affected both the appearance and internal equipment of combat vehicles. At TOS-1A modern power plant and dynamic protection are installed. Heavy flamethrower received a new launcher, and the transport-loading machine of the complex - a crane."

I hope that the reloading method has been improved. It's so much faster to be able to replace an entire rocket pack instead of loading them one by one.

Looks like the increased range of the new thermobaric rockets made the heavy armour of the tank-based TOS-1/A unnecessary, so they moved to a wheeled system for extra mobility and reduced cost. Nothing but good things can come from that. Having a rocket launcher sit in the open for a few minutes to aim and fire while staying within the firing distance of the enemy's ATGMs was never a comforting thought.

Being a rather effective system would make it a rather high priority target for those that see it on the battlefield too so having it further from the front lines is probably a good thing.
d_taddei2

GarryB wrote:Being a rather effective system would make it a rather high priority target for those that see it on the battlefield too so having it further from the front lines is probably a good thing.

As well as being faster in wheeled configuration shoot and scoot tactics. The system depending on what wheeled chassis it's mounted on could be designed to look like a heavy truck the launcher designed to sit behind the cab rectangular in shape and when ready up it pops to recce units or aircraft iT would suddenly be a not so interesting target.
George1

3 TOS-1A Solntsepek MLRS sets have been transferred to a Nuclear,Biological & Chemical protection (RKhBZ) regiment in the Altai Krai (TsVO), Russia. [This is prob. 10th NBC Protection Regiment (PRKhBZ) in the village of Topchikha] 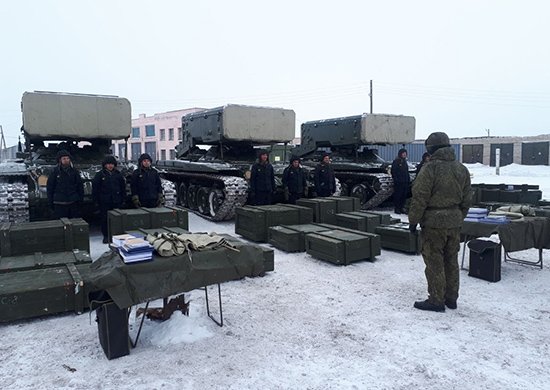 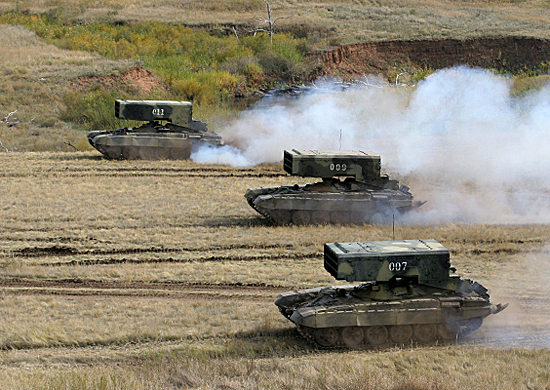 The TOS-1A Solntsepek heavy flamethrower systems have been supplied to the RChB troops of the Eastern Military District stationed in the Trans-Baikal Krai, Republic of Buryatia and Amur Region. Units are currently equipped by 100%.

The TOS-1A Solntsepek heavy flamethrower systems are designed for fire support of motorised rifle and tank units, incapacitating light-armoured and automobile vehicles of the adversary.

The TOS-1A Solntsepyok heavy flamethrower is a multiple launch rocket system, which comprises a BM-1 combat vehicle, a TZM-T transporter-loader and an ammunition load of rockets

ST. PETERSBURG, November 13. /TASS/. A company armed with TOS-1A Solntsepyok (Scorching Sun) heavy flamethrower systems has been set up within the radiation, chemical and biological defense regiment of the combined arms army in the Western Military District, the District’s press office reported on Tuesday.

The heavy flamethrowers company is based in the Leningrad Region in northwest Russia, the press office said.

Before the company was set up, drills were held at a proving range in the Leningrad Region, using Solntsepyok heavy flamethrowers and RPO-A rocket-propelled infantry flamethrowers to practice strikes against enemy engineering fortifications. Now it has been officially announced that a new unit armed with TOS-1A heavy flamethrowers has been set up.

"A unit of heavy flamethrower systems of the Western Military District has been formed in the Leningrad Region. The regiment has completed establishing the unit of heavy flamethrower systems, which has received TOS-1A Solntsepyok weapons as its armament. Also, reconnaissance units have received the most advanced RKhM-6 chemical reconnaissance vehicles under the defense procurement program this year," Commander of the Radiation, Chemical and Biological Defense Regiment Colonel Alexei Suslov was quoted by the District’s press office as saying.

The TOS-1A Solntsepyok heavy flamethrower is a multiple launch rocket system, which comprises a BM-1 combat vehicle, a TZM-T transporter-loader and an ammunition load of rockets. The TOS-1A heavy flamethrower system is a unique weapon by its incorporated technical solutions, assigned combat missions and combat efficiency and is unrivaled in the world.

The TOS-1A is capable of firing both thermobaric rockets and smoke-incendiary munitions. The flamethrower is designed to set ablaze and destroy buildings and structures and damage an enemy’s lightly armored vehicles.

Probably the best footage of TOS-1 I've ever seen!

Rob Lee
@RALee85
·
9h
Reportedly, the 1st sketches of the TOS-2 MLRS, which recently received a patent. This appears to continue in the vein of the Habrosok program of putting artillery pieces on wheeled vehicles, and it apparently will have its own crane for reloading. 2/ 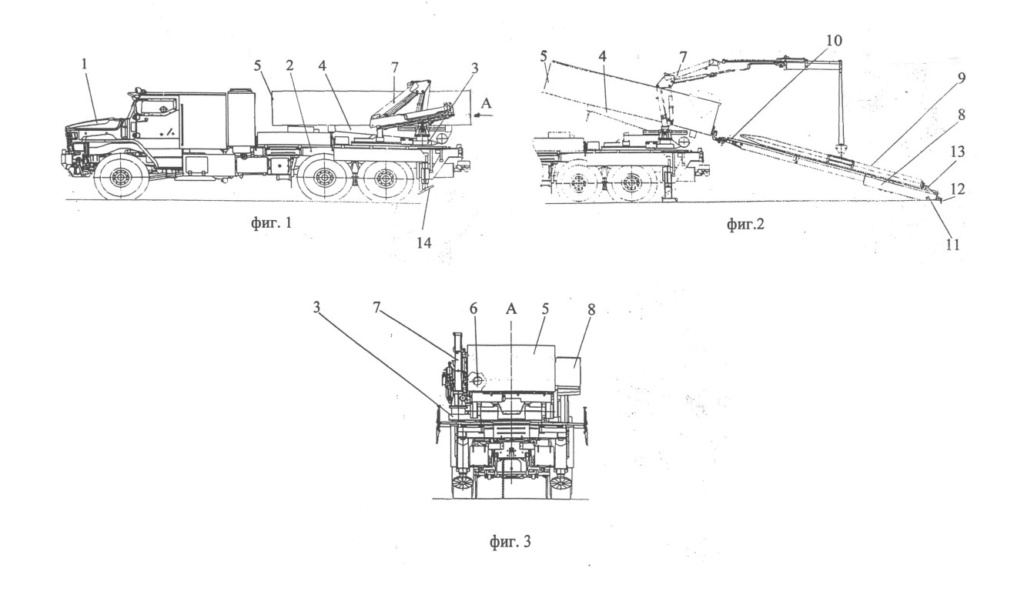 Isos wrote:Rob Lee
@RALee85
·
9h
Reportedly, the 1st sketches of the TOS-2 MLRS, which recently received a patent. This appears to continue in the vein of the Habrosok program of putting artillery pieces on wheeled vehicles, and it apparently will have its own crane for reloading. 2/

It's not an artillery piece
More like the Sturmtiger in WW2, a fire support vehicle

Anyway here is some more info:

According to him, Tosochka has better performance characteristics, as compared to TOS-1A Solntsepyok.

"In contrast to its predecessor, Solntsepyok, the new system is based on the wheeled chassis", added Vladimir Lepin. The designers made such decision drawing on the operational experience of track-based flamethrower systems in desert zones.

In the falls 2018, directors of Techmash announced that in 2019 the state trials of Tosochka would finish.

The heavy flamethrower systems are intended to destroy light-armor vehicles, incapacitation of personnel deployed on open spaces or in shelters, initiate fires and smokescreens by smoke/incendiary munitions.

The systems are armed with fuel-air explosive munitions that use spraying of combustible material and explosion of the formed gas cloud. In terms of power, they are compared with midget tactical nuclear munitions, though have no radiation effect. Obviously not as well protected as the previous model that used a tank chassis, but with a range of only 4-5km it had to operate near the front lines to fire its rockets.

This one has double the range doens't it? 10-12km range so it can operate further back in less danger and of course the costs of buying and operating a wheeled vehicle are dramatically less than any track layer whether they are heavily armoured or not.

Looks like together with the loader truck that this vehicle uses its own built in crane to reload the rockets presumably directly from a truck parked beside it with the crew of both trucks remaining inside their cabins perhaps?
JohninMK

What else is the truck chassis used for? So commonality of parts etc? If successful might other MLRS use it?

A lot easier and faster to move around as well with no need for a transporter over long distances.
Hole 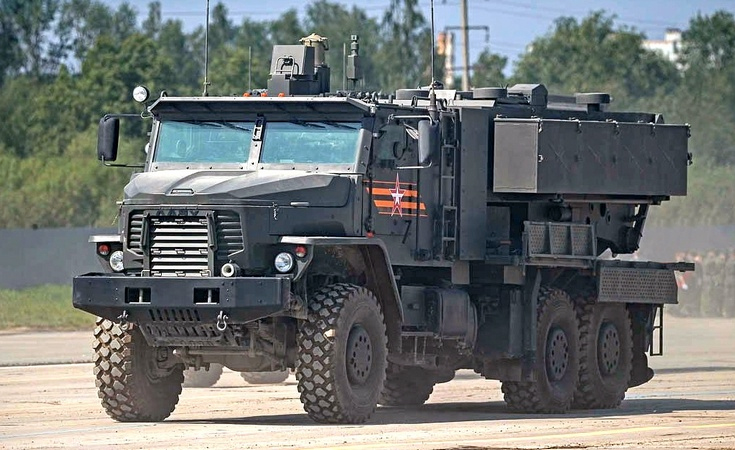 From the russian point of view it is not a MRLS but a flamethrower.

The TOS-1A was designed to give fire support to infantry. Maybe the new system has new rockets with longer range = no need for massive armor.
PapaDragon

I like the fact that they are moving more stuff to armoured trucks, they did the same with new Pantsir