Mr. NO: 5 facts about the USSR’s most iconic Foreign Minister

1. Gromyko became a diplomat by accident

2. Gromyko used to wear down his counterparts on purpose

Re: Soviet diplomats and politicians

U.S. presidents & Soviet leaders trusted this ‘man in the middle’ the fate of superpower talks 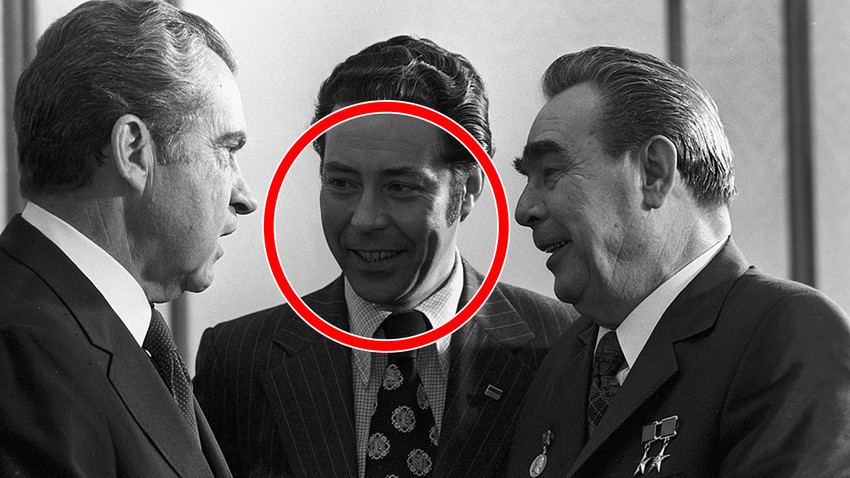 From Dwight Eisenhower to Ronald Reagan, Soviet interpreter Viktor Sukhodrev was the voice of the USSR at negotiations of the highest level between Moscow and Washington.

When Nikita Khrushchev arrived in the U.S. in September 1959, he became the first Soviet leader to visit America and it caused quite a stir in the country that was the chief Cold War adversary of the USSR.

Among other places, the eccentric Soviet leader was taken for a drive around Los Angeles. From his car, he saw young American women wearing tight shorts, something unheard of in the Soviet Union at the time.

He then turned to the U.S. Ambassador to the UN Henry Cabot Lodge who was accompanying Khrushchev in the car and said:

“Interesting things you have here… Women [walk] in short pants. They wouldn’t have allowed this at ours.”

He then observed tidy lawns and private houses and addressed Lodge again:

“Yes, of course, everything is arranged neatly, it’s clean, and people are dressed well. But never mind! We will show you Kuzma's mother…”

Earlier that same year, on July 24, 1959, the American National Exhibition opened at Sokolniki Park in Moscow. There, in the heat of the argument, the impulsive Soviet leader Nikita Khrushchev addressed the then U.S. Vice President Richard Nixon with a commoner’s expression “We will show you Kuzma’s mother” — an expression of an unspecified threat or punishment, which means “to teach someone a lesson” or “to punish someone in a brutal way” that was, at the time, literally translated as “Kuzma’s mother”.

Unlike at the famous Kitchen Debate between Khrushchev and Richard Nixon, the Soviet leader’s common vernacular expression did not catch Sukhodrev, who accompanied the Soviet leader on his trip to the U.S., off guard. Viktor had done his homework.

“After the ‘Kuzma’s mother’ incident, I skimmed all the dictionaries. This expletive is used when it is impossible to use a stronger one. I was looking for an equivalent of this expression. Something like ‘We will kick you so much in the head’ or ‘We will show such hell!’”

Yet, when Nikita Khrushchev was driven around Los Angeles in September 1959 he mentioned “Kuzma’s mother” again, he suddenly turned to Sukhodrev and explained himself: “When I was at the exhibition with Nixon, it [the phrase] was translated incorrectly. It’s very simple: ‘We’ll show you something you’ve never seen’.”

“I froze for a moment: I had never seen this interpretation of the expression in any dictionary,” said Sukhodrev. Khrushchev had simply invented a new meaning for the famous folk phrase.

With years, Viktor Sukhodrev’s professionalism, quick-wittedness, and personal charisma would make him friends, not only among the Soviet leaders, but also in the United Nations, the State Department and even the White House.

This neat, dark-haired man standing in the middle — between Jimmy Carter and Soviet leader Leonid Brezhnev — appeared in many photographs of high profile Soviet-American negotiations that happened during the Cold War.

In a way, Viktor Sukhodrev was destined to build a career in foreign affairs, as he spent his childhood in London, where his mother was stationed as a member of the Soviet trade mission.

“Sitting in the bomb shelter at the Soviet trade mission during the night bombings of London, I used to ask my mother: ‘What are the children talking about?’ [Later] I played with English peers and communicated with them. So without much effort, I began to speak English and even forgot Russian,” said Sukhodrev in one of his interviews.

Upon returning to the Soviet Union, Sukhodrev was speaking English as a native Briton. He was excused from attending English classes in a Soviet school and later enrolled in the Institute of foreign languages, where he also studied French.

A fortunate coincidence helped to launch the star carrier of the man who would soon become the English voice of the Soviet Union in its relations with its chief Cold War rival.

“In 1955, a delegation of real estate developers, headed by the Minister of Construction, went to England. I was studying with a guy whose father worked in the Ministry of Construction. He told his father about me, and I, a fifth-year student, became a member of the delegation. This was my first experience as an official translator,” said Sukhodrev.

Soon enough, Sukhodrev popped up on the radar of top Soviet interpreter, Oleg Troyanovsky, who used to work with Stalin, Molotov and Gromyko. He was looking for a successor and approved the candidacy of the young pretender. Subsequently, Sukhodrev received a job at the Soviet Ministry of Foreign Affairs.

‘The man in the middle’

Sukhodrev met Soviet leader Nikita Khrushchev at one of the official receptions after only two weeks working in the ministry. “I remember that at some point, the lights came on, photo cameras began snapping, and living portraits entered the hall: Khrushchev, Bulganin, Molotov, Kaganovich, Mikoyan. I was afraid to imagine that I would translate for them. That very day, I spent forty-five minutes translating for Khrushchev,” said Sukhodrev years later.

Little did he know, the young interpreter would soon rise to prominence on both sides of the iron curtain and would turn into an international celebrity in his own right.

As more and more high ranking officials learned of his professionalism and natural gift to seamlessly translate anything from Russian to American or British English, the virtuoso interpreter managed to surpass seven U.S. presidents and five Soviet leaders, becoming a more familiar figure to the State Department and the White House staff than the ever-changing heads of Soviet envoys.

For Sukhodrev, familiarity often translated to trust if not friendship. Richard Nixon would sometimes allow Sukhodrev to be the only interpreter in the room, without the participation of American interpreters.

When U.S. President Gerald Ford arrived in Vladivostok to meet Soviet General Secretary Leonid Brezhnev for talks on arms control in November 1974, Gerald Ford saw Sukhodrev and greeted him like an old friend — “Hi, Viktor!” — and then proceeded to introduce him to members of the American delegation.

Despite this friendly attitude towards many U.S. presidents, Viktor Sukhodrev did have his favorite:

“I’ve met many foreign presidents and prime ministers. But I was most impressed with Kennedy,” said Sukhodrev, who had an opportunity to interpret during the talks between John F. Kennedy and Nikita Khrushchev in Vienna in June 1961.

This was a rather strange admission, as Kennedy himself remembered the talks as a disaster: “Worst thing in my life,” Kennedy later told a New York Times reporter. “He [khrushchev] savaged me.”

Perhaps, Kennedy’s desire to impress the older and more experienced Soviet leader simply backfired with Khrushchev’s interpreter, who was smitten with the newly elected U.S. President.

Throughout his extensive career as a high profile interpreter, Sukhodrev personally met so many people of power who dominated the 20th century, that few other living men have surpassed his record. He met former Prime Minister of India Indira Gandhi, Canada’s former Prime Minister Pierre Trudeau, seven U.S. Presidents and a few British Prime Ministers.

Yet, his career was not completely eclipsed by the presence of men of power. Sukhodrev moved on to become an international diplomat in his own right, working as a special assistant to the UN Secretary-General since 1989 and then moving on to work as a Director of the Security Council Affairs Division, the secretariat branch of the powerful UN body, the Security Council.

Viktor Sukhodrev retired in 1994, returning from New York to a newly independent Russia, a much different country than what he had left behind.

The renowned interpreter, diplomat, and friend to many great men of the 20th century passed away in 2014 at the age of 81 at his home outside Moscow.

He was mourned both in Russia and in the U.S. in a rare moment when the two countries united in saying goodbye to their mutual comrade.