The US pilots had no problems admitting that the Su-27's were superiors fliers.

Su-30 on the left in the above picture. 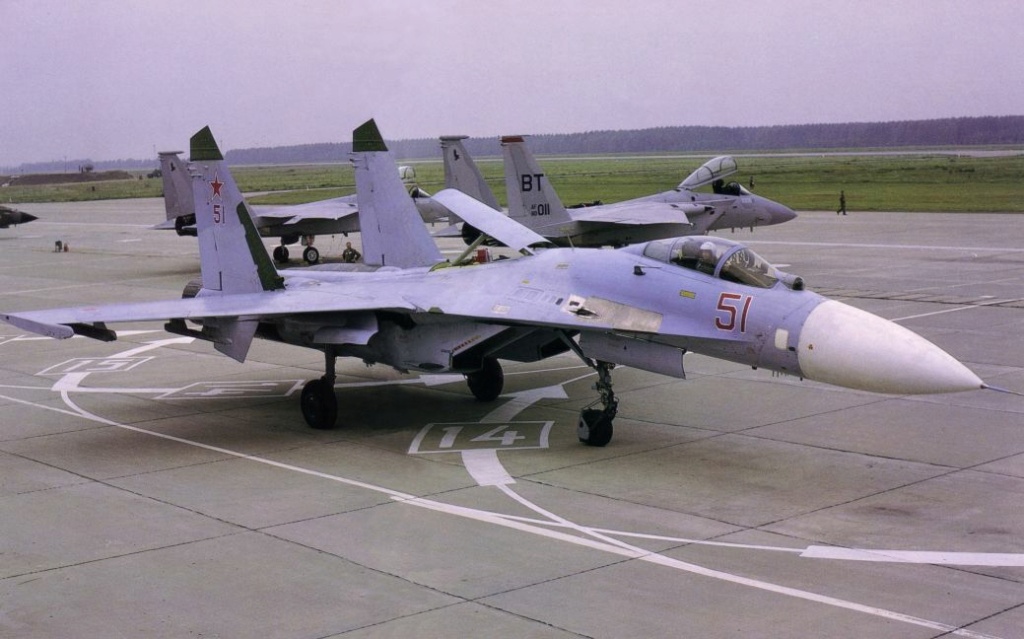 Baltic stronghold: the newest Su-30SM2 will be sent near Kaliningrad

The first samples of the deeply modernized Su-30SM2 will be sent to the Baltic Fleet aviation. Multifunctional combat vehicles will be located in the Kaliningrad region. They are capable of not only shooting down planes, cruise missiles and drones, but also destroying land and sea targets. In the region, fighters have to increasingly face NATO opponents in the air, including the latest fifth-generation F-35 aircraft. Experts believe that the new items will significantly increase combat capabilities in the Baltic and strengthen Russia's position there.

Sources in the military department told Izvestia that the first Su-30SM2 will enter service with the Baltic Fleet by the end of this year. The newest fighters will be used to re-equip the 689th Fighter Regiment and the 4th Guards Naval Assault Aviation Regiment. The arrival of these aircraft will replace the outdated Su-27 and radically increase the combat capabilities of naval aviation in the region. They will become the first representatives of the newest type of multipurpose vehicles in service. So far, they are not in the aerospace forces or in the naval aviation of other fleets.

Last year, Defense Minister Shoigu announced his intention to sign contracts for 21 new Su-30SM2 fighters and 25 combat training Yak-130s by the end of 2020. The total amount of these two contracts amounted to more than 100 billion rubles. Deliveries are due to start this year.

Not so long ago, the head of the Baltic Fleet's naval aviation, Colonel Andrei Kosterin, announced that four new aircraft would be added to its fleet this year, without specifying their types. According to him, in addition to them, one military transport An-140 and three helicopters will arrive there.

Due to the increased activity of NATO, the western strategic direction remains the most threatened for the military security of the Russian Federation, the Ministry of Defense said. To neutralize threats, new military units are being formed and the existing ones are being rearmed.

“Kaliningrad is actually our only outpost in the West, its vulnerability lies in the fact that it is somewhat distanced from the main territory of Russia,” Inna Vetrenko, head of the Department of Management and Social Technologies of the North-West Institute of RANEPA, explained to Izvestia. “Therefore, it is very important for us that he be equipped with the most reliable means of protection in the event of an exacerbation, that he be able to hold out on his own and respond to threats. The ongoing strengthening there is being implemented planned, strategically.

In June, NATO exercises took place and it became clear what our Baltic Fleet lacks. To strengthen it, an auxiliary component is needed: transport and air. Therefore, it was decided to equip the Baltic Fleet with the new Su-30SM2. This will strengthen Russia's position in the Baltic, the expert emphasized.

Confrontation over the Baltic

According to the Russian Ministry of Defense, in the first six months of this year, Baltic Fleet fighters took to the air more than 70 times to escort foreign combat aircraft, including the latest F-35s. Meetings of Russian pilots with NATO aircraft occur in this region more often than anywhere else.

About fifteen fighters from the air forces of the main NATO member countries are permanently based at the airfields of the Baltic states on the principles of rotation. The latest combat vehicles are regularly sent there.

In addition, NATO countries in the Baltic region are actively modernizing their air forces, replacing outdated F-16 fighters. In the coming years, several dozen F-35s will be deployed in the region. Poland recently signed a contract for 32 units. Holland and Norway purchased these machines, Denmark purchased 27 units.

“The appearance of the newest super-maneuverable fighters Su-30SM2 will increase the capabilities of the Baltic Fleet aviation at times,” military expert Dmitry Boltenkov told Izvestia. - They are of a qualitatively different generation than the Su-27SM fighters, which are in service in the Kaliningrad region now. SuperDry can intercept surface and air targets, deliver missile and bomb strikes - this is a good, multipurpose aircraft, acting as an interceptor and attack aircraft.

Against the background of the intentions of Poland and Denmark to purchase lots of modern F-35 fighters, and the Americans are constantly active in the Baltic, strengthening the defense of the region by supplying modernized Su-30SM2 is very important, the expert noted.

The 34th mixed division of the Baltic Fleet Air Force is stationed in the Kaliningrad region. It includes the 4th Guards Attack Aviation Regiment, equipped with Su-24M bombers and a squadron of multipurpose Su-30SM, as well as the 689th Fighter Aviation Regiment, armed with modifications of the Su-27 fighter. They are supplemented by a helicopter regiment with transport, anti-submarine and search and rescue vehicles.

Even in the basic version, the Su-30SM are formidable combat units. In naval aviation, they play the role of both fighters and strike aircraft. In addition to air-to-air missiles, they can use the powerful X-35 anti-ship, guided and conventional bombs. They have already been tested not only for training purposes, but also in the real combat situation of the Russian operation in the Syrian Arab Republic.

A new modification of the Su-30SM2 was developed taking into account the extensive Syrian experience. It replaced the "heart" in order to unify with the most advanced Russian fourth-generation fighter Su-35. Instead of the AL-31FP engine, the combat vehicle received a much more powerful AL-41F-1S aircraft engine with an all-aspect controlled thrust vector. Installed on the plane and a powerful radar "Irbis". It will allow you to detect targets, including subtle ones, at a much greater distance.

The Su-30SM2 was equipped with a multichannel communication and data transmission system, originally developed for the fifth generation of Russian fighters. It allows you to exchange information in real time with other air vehicles, helicopters and ground control points, issue and receive target designation, and serve as an element of modern automated tactical control systems.

The modernization made it possible to expand the range of high-precision missiles that can be used from aircraft, including heavy anti-ship ammunition. Work on import substitution of many foreign avionics parts was carried out on the fighter. The capabilities of onboard electronic warfare systems have been increased, which protect the aircraft from being hit by missiles.

franco wrote:Baltic stronghold: the newest Su-30SM2 will be sent near Kaliningrad

Not so long ago, the head of the Baltic Fleet's naval aviation, Colonel Andrei Kosterin, announced that four new aircraft would be added to its fleet this year, without specifying their types. According to him, in addition to them, one military transport An-140 and three helicopters will arrive there.

It seems clear that the 4 Su-30SM2 will complete the squad of the 4th Mixed Regiment, which has only received 8 so far.
What is not clear in the writing of the news is whether the Su-30SM2 are aircraft built in 2021 or are retrofits of previous aircraft, given that the 114 received until 2018 will be modernized until 2027-28, in the same way as the Su-34NVO , Especially considering that Millerovo will receive Su-35 and Su-30 could be left over for modernization.

As for the An-140 and the helicopters, it is clear that they are devices transferred from other units or from the reserve.
The semi-Ukrainian An-140 is no longer manufactured, there are 4 in the navy (2 in the Pacific Fleet and 2 in Ostafyevo) and 5 with no known assignment that could be transferred to the navy.
The helicopters will be modernized Ka-27M or Ka-29 taken from the reserve.
Sponsored content