Submarine "Severodvinsk" launched the "Zircon" rocket from a submerged position

The flight of the missile from leaving the water to hitting a conditional target fully corresponded to the specified parameters, the Russian Defense Ministry said

"The second test firing of the Zircon hypersonic cruise missile was carried out by the crew of the Severodvinsk nuclear submarine missile cruiser for the first time from a submerged position, from a depth of 40 m, in the waters of the White Sea at a simulated sea target in the Barents Sea. According to objective control data, the missile's flight from the exit from the water before hitting the conditional target fully corresponded to the specified parameters, "the military department said.

Second firing from a submerged . Unfortunately, there's not much you can see

I was expecting a longer gap between surface fire & submerged

“On October 4, within the framework of the Zircon hypersonic cruise missile test program, test missile firing was carried out from a carrier rocket - a nuclear submarine of cruising project 885 / 885M, namely, from the Severodvinsk submarine. The shooting was carried out from a submerged position. All systems - the submarine's missile control systems and the missile itself - worked normally without comment. Test objectives achieved. The underwater missile launch has been worked out and confirmed. This completes the tests of the missile from the submarine, ”Moiseev reported. According to him, "taking into account the earlier tests and firing, the Zircon hypersonic cruise missile has confirmed all its characteristics."
Источник: http://bastion-karpenko.ru/ ВТС «БАСТИОН» A.V.Karpenko

One submerged launch is 'tests complete'?

I would have thought you'd want to test several depths & speeds at least.

In 99% of the cases the missile will be fired from the same depth and with the same speed of the sub.
mnztr

I would have thought you'd want to test several depths & speeds at least.

Subs launch missiles from a very specific hovering depth, not while they are underway. AFIK even torpedos are launched in a very tight envelope.
LMFS

State tests will begin in November, said a source in the military-industrial complex.

MOSCOW, October 6. /TASS/. Two successful launches of the Zircon hypersonic missile from the Severodvinsk nuclear submarine will make it possible to conduct state tests of the missile from the Admiral Gorshkov frigate before the end of the year, a source in the military-industrial complex told TASS on Wednesday.

"After successful tests of the Zircon from a submarine, there are no obstacles to the start of state tests from a surface carrier," he said. According to the source, the state tests themselves will begin in November, and one or two launches may be completed by the end of the year.

The Reutovsky NPO Mashinostroyeniya (part of the Tactical Missile Armament Corporation), where the missiles were developed and manufactured, did not comment on this information to TASS.

Earlier, another source told TASS that flight design tests of the Zircon from the Admiral Gorshkov frigate were successfully completed.

On October 4, the Russian Defense Ministry announced the first two test launches of the Zircon from the Project 885 Severodvinsk submarine - from the surface and underwater positions. It was noted that the complex of missile weapon control systems of the submarine and the missile itself worked in normal mode without comments. According to the Defense Ministry, the test objectives were achieved - the underwater launch of the rocket was tested and confirmed. Later, the commander of the Northern Fleet, Alexander Moiseev, reported to Russian Defense Minister Sergei Shoigu about the successful completion of missile tests from the submarine.

Ah so there may be more thorough testing/envelope expansion in state tests then.
owais.usmani

Martyanov on the use of Tsirkon vs CONUS with real numbers and ASW tactics:

Cirkon state tests will start in November. They plan to make five shootings by the end of the year.
owais.usmani 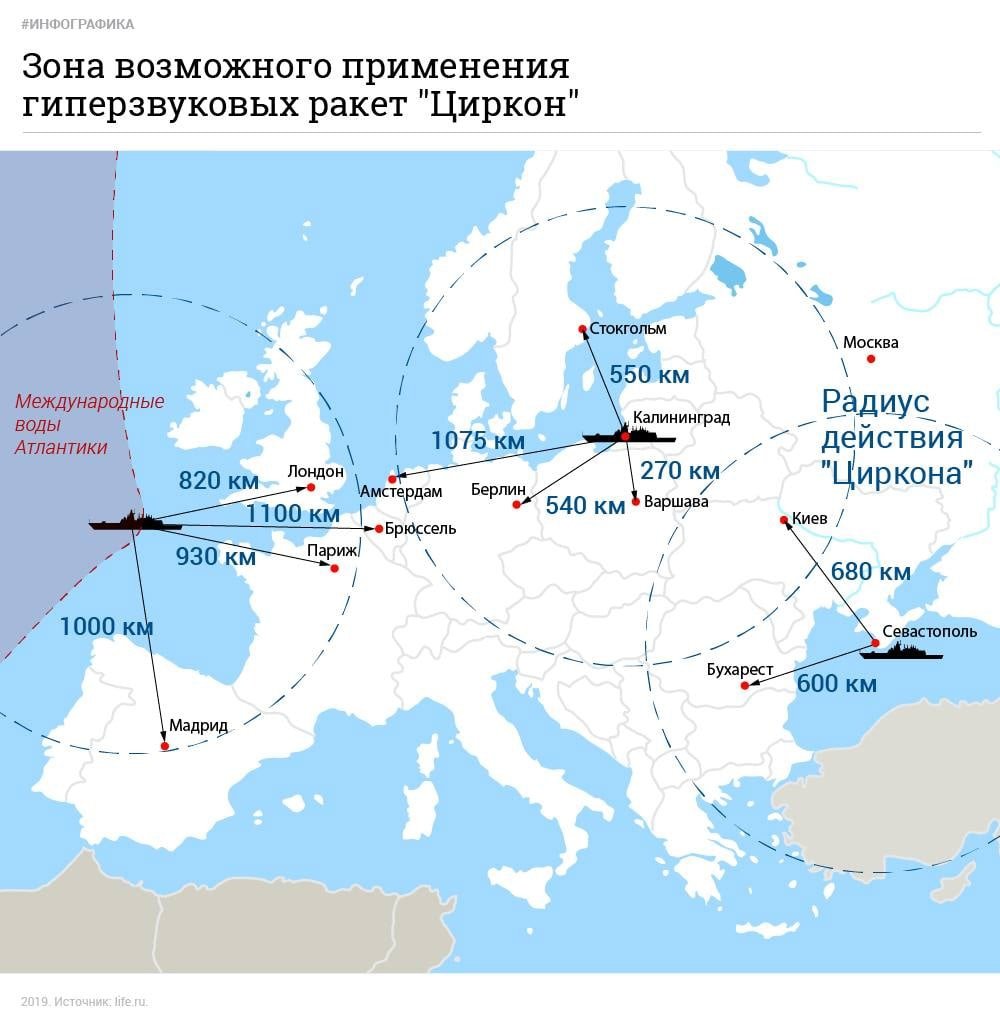 Kinzhal covers all of that with mig-31 staying in the russian air space.

Would be interesting to see them depict those ships with 4,500km range Kalibre land attack cruise missiles....
LMFS

Good exercise, though there have been sources (quoted by TASS) stating that the range of Tsirkon vs land targets is 1500 km. Which means that a territory the size of European countries can be covered trivially. I guess in any case vs. Europe Russia has no need to risk vessels or subs and can strike with land based missiles from Russia itself.

Isos wrote:Kinzhal covers all of that with mig-31 staying in the russian air space.

Except for the ship in the Atlantic all of the depicted ships are in russian territorial waters. The map just shows what the ship/missile combo is capable of. Launching missiles from land, air and see make matters even worse for the defender/aggressor.

Like the whole of Europe from the Caspian, or alongside in Murmansk.
Isos

Not that clear. Can you point at an area where topol missikes can't hit in europe ?
Isos

Actually out of the yankee doodle military analyst's, he is one of the few who tries to see the bigger picture IMHO. So you must really dislike the others

PS was surprised to see yesterday that one of the Polish NATO pro's military analyst did a quote "deep dive" on the Ukrainian report of build-up of Russian BTG's on the border and he had to acknowledge they were counting Donbass forces in their totals. It must have almost killed him (a Russian hater) to admit this from his pet Ukies

So under my honour code, I have to acknowledge his integrity.

I disagree strongly with you.

Most of the time he uses russian articles and does the effort to summurize them without commenting.

He is quite reliable.

And even when he gives his opinion it is never biased. Btw it is very rare to see him give his opinion. I follow him daily.

He is the only reliable source out there on twitter. Most others are too much fanboys (both side).