Orion is the equivalent of the RQ 1 Predator. So what the USA already had more than 20 years ago.
miketheterrible

Rasisuki Nebia wrote:i wonder if this is indigenous thermal camera, seeing how Russia developed so many drones in the past 10 years even under sanctions, that wouldn't surprise me. also i guess this is what's been hitting militants the past 2 years, better late than never

Russia been making various thermal cameras of their own for years. It's only recently they made one better than that of Thales Catherine XP for Armata of their own design.

It's done by NPO Orion which is part of UOMZ (Schwab).

Edit: the new thermal cameras that are cooled microbolometers are also now seen in T-72B3(M) tanks and nearly every other device using thermals. Uncooled for optics for troops.

A video of the use of the Russian medium-altitude strike drone of long duration Orion flight during tests in Syria has appeared on the Web. The plot with the video of the Ministry of Defense was shown on the TV channel "Russia 1".

Arrow wrote:Orion is the equivalent of the RQ 1 Predator.  So what the USA already had more than 20 years ago.

I think you maybe right but I think in the next 3-4 years, Russia will match the US in drones.

Definitely interested in that pod-based weapon at 7:30. Some kind of ATGM or precision rocket, perhaps.

The way it flies it seems to be a missile rather than a guided bomb. And it doesn't look like any of the weapons they showed at army 2020.

IMO it could be a hermes missile. 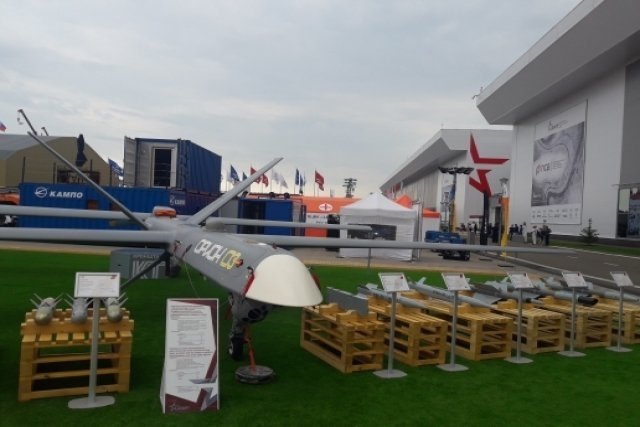 Cheetah wrote:Definitely interested in that pod-based weapon at 7:30. Some kind of ATGM or precision rocket, perhaps.

The container is of an ATGM, Charly015 suggests it is the Kornet, but the Bulat may be a good option too 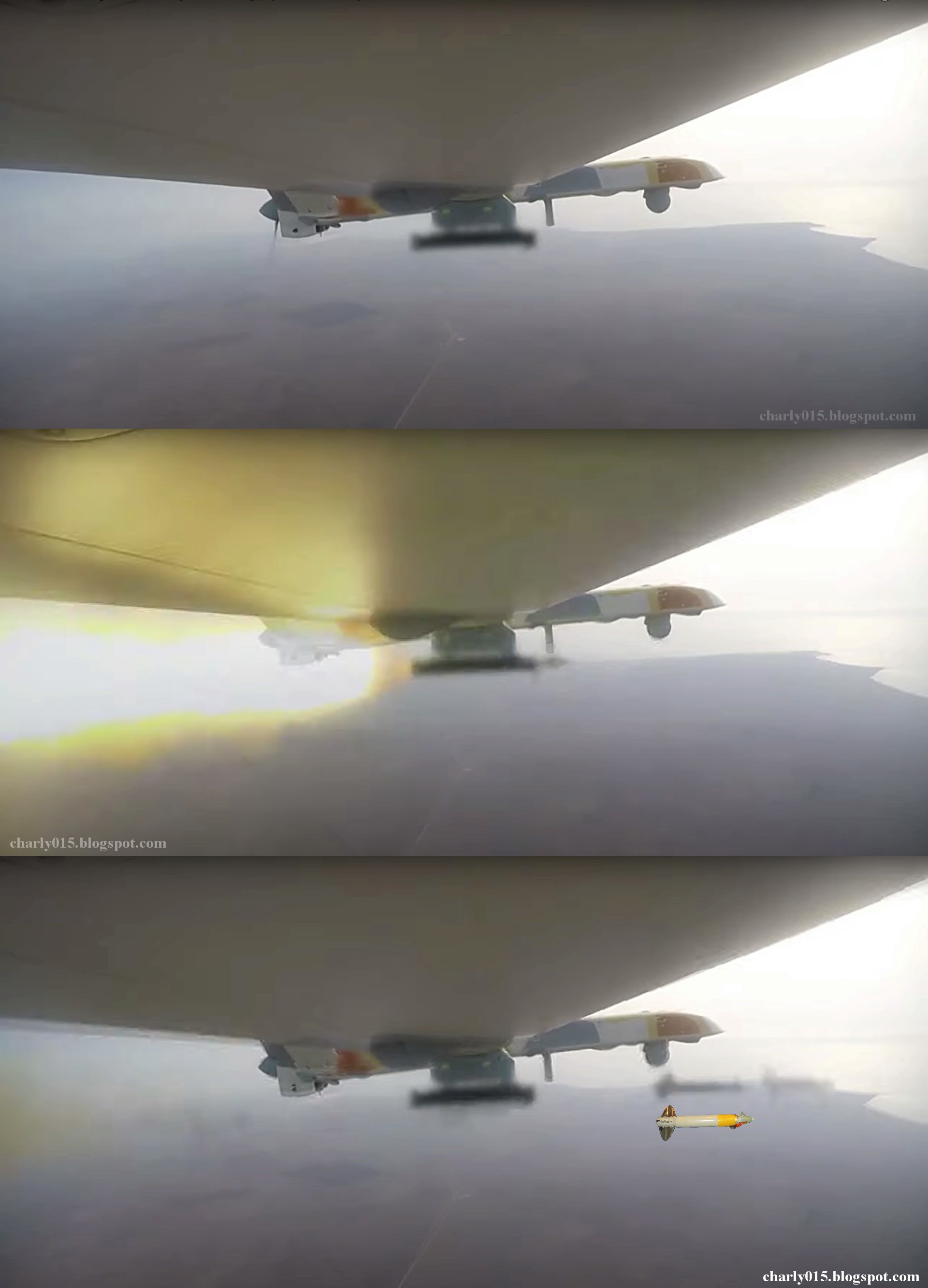 The missile is like 2 times bigger than the kornet. On the picture shared by Cheetah there is a two part boddy like on pantsir missile which could suggest it's a Hermes.
magnumcromagnon

Cheetah wrote:Definitely interested in that pod-based weapon at 7:30. Some kind of ATGM or precision rocket, perhaps.

The container is of an ATGM, Charly015 suggests it is the Kornet, but the Bulat may be a good option too

It's definitely not Kornet, for one it has a rocket booster stage and looks more like Hermes if anything: 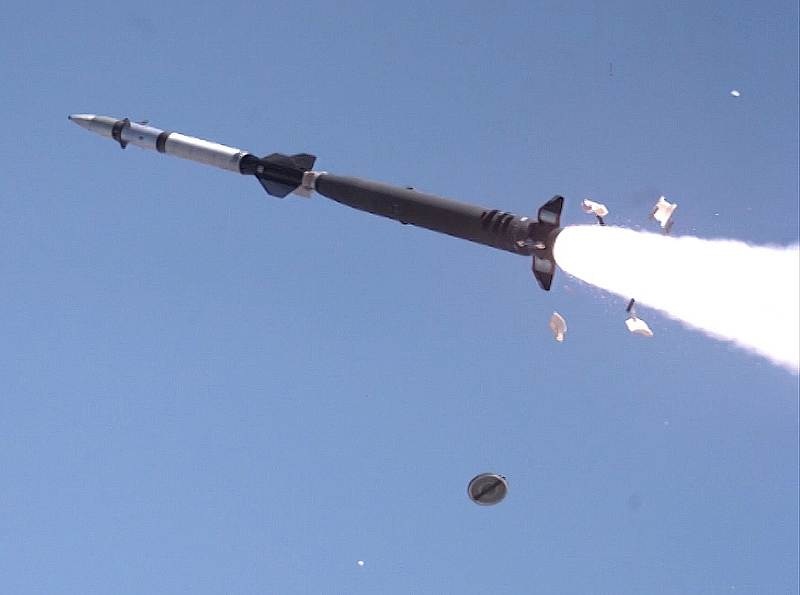 Now compare the above image with this image:

Isos wrote:The missile is like 2 times bigger than the kornet. On the picture shared by Cheetah there is a two part boddy like on pantsir missile which could suggest it's a Hermes.

Unless it is a "telescopic" missile longer than its carrying container, what you refer is a video artefact. Look the pictures from Charly015 (and look at the size of the canister!)
Isos

Charlie scaled the kornet with his dick on the picture and you can see there is a part of the missile blured in front of the kornet he put there.

Charlie scaled the kornet with his dick on the picture and you can see there is a part of the missile blured in front of the kornet he put there.

How do you get that longer missile inside that canister?
Isos

I see a two body missile. Why would they hide the kornet anyway ? The only missile they have hidden until now is the hermes.
Cheetah

Fish-eye lens may be distorting the image, pinching it in the middle and stretching it towards the sides.

If it is an artefact, I'd expect the shape to be duplicated in multiple places, but it does appear to be two entirely separate stages.

Not to mention, isn't the effective range of Kornet supposed to be ~5-6km? Seems like a particularly pathetic range for a fixed-wing ATGM, especially since the Orion appears to be in level flight at some considerable altitude.

EDIT No. 1:
upon second viewing, frame-by-frame, it does appear to be two duplications of the same thing offset horizontally (Especially noticable just before it leaves the frame).
Sorry, Isos, but I'm edging towards it not being Hermes. Still not sure about Kornet, though.

Examples of ghosting during fast movement between frames can bee seen throughout the video. See below. 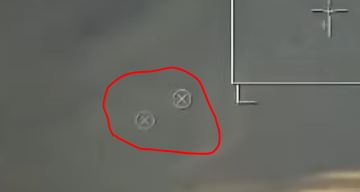 EDIT No. 2:
Also, the Orion is stated as being 8 metres long, while a Hermes missile is 3.5 metres long.
For a very crude visual comparison.

Could be, that this is the new ATGM, which was first noticed on Mi-28NM and was also blured. Russia made new weapons for drones and helicopters.

The old ground launched Kornet has a range of about 6km launched from the ground at a ground based target but later models have a 10km range.

The range for the Bulat is unknown but probably between 5 and 7km range being much slimmer though of a similar length intended to engage lighter armoured targets.

The point is that both being supersonic missiles launching them in forward flight should massively improve their performance and the fact that the guidance system can control the missiles to 10km or more suggests that air launched versions could hit targets much further away... from high altitude or medium altitude their range to target could be rather big... very high flight speed and no trailing wire... they would be ideal UAV launched weapons... along with the helicopter launched Shturm and Ataka command guided missiles that are also supersonic and are command guided... and quite accurate.

That looks more like the rocket motors of disposable rocket launchers like RPO-A that intentionally burn out in the length of the launch tube to rapidly accelerate the missile but protect the operator from the rocket blast at launch.

It is OK to not know exactly... it looks cool anyway. 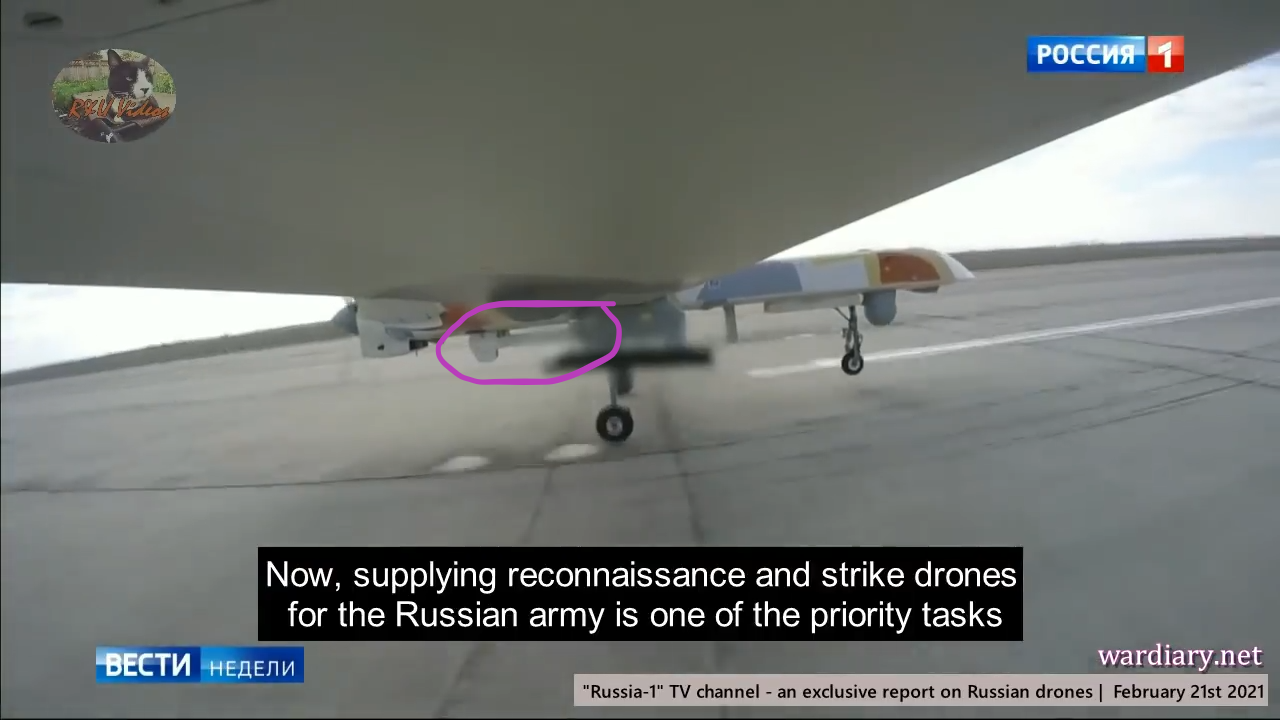 Those are the landing gear well doors

As to the missile and range, these UCAVs will fly 7 km altitude more or less, so any missile launched from them will get a big range boost. Targetting equipment is also not unlimited in terms of capacities, so I would say up to 10-15 km is the main range of interest.

Indeed, if that is the rear of a missile sticking out of the back of a tube, either the fins will be ripped off or the tube shredded on launch.

Interesting catch Lyle6, but as pointed out I think it is the undercarriage door.

The launch tube seems to be the dark rectangle, whereas the undercarriage door is in line with the wing pylon. and not the launch tube.

Of course a lot about this system is confusing... the launch tube in this and the Havoc video is far too short to be Hermes, and some images from the Havoc video seem to show a missile with fins that is not carried in a launch tube...

It is all very confusing with lots of conflicting information... is it Hermes or LMUR or 9M100 or just something new...

The latest version of the SA-13 seems to be a QWIP equipped imaging sensor in the visible and IR light ranges with image processing power to identify targets... essentially like a CCD chip in a video camera that can be stamped out in mass production for a few dollars a sensor but can "see" light in the visible and IR frequencies making it a short wave IR thermal camera.

With video processing it should be excellent for targeting and if produced in large volumes the price should be very very reasonable... a few hundred dollars... though a datalink and control channels will add to that price they certainly wont be Javelin or Hellfire expensive... but will be able to detect and engage a wide variety of targets which should make them rather flexible.

There are Kornet variants with HE and thermobaric warheads and ranges up to 10 km, that is the equivalent of hellfires used by US drones and basically a flexible choice weapon for such a platform. Maybe it is something different, but I see no proof in the video or any reason for it being something very sophisticated, you want a light cheap weapon which is not overkill against most targets but still capable enough.
Cheetah

LMFS wrote:...I see no proof in the video or any reason for it being something very sophisticated...

That's fair. To be honest, my head was still stuck in the mentality of manned-aircraft, forgetting that these drones can casually fly at sub-200km/h. At those speeds, the range of ATGMs starts to seem a lot more valuable then it otherwise would be to, say, an Su-25 doing 600-800km/h.

Upon re-evaluation It may very well be something like Kornet or some similar ATGM.

If you look at the video with the scene of the missile leaving the tube, it immediately afterwards shows a obvious missile(rocket motor flare) hitting a target. Now, if the editors simply stitched together scenes, i.e. "Show launch, then impact" and were simply given pre-censored footage for the Zvesda editors to work with to make the program, then it could be a Kornet being launched and something else hitting the target.

If it was Kornet being launched, then the impact scene afterwards has to be something else, because Kornet is a beamrider with no after-launch pre-aiming possible. As soon as the missile launches, it needs to see the laser beam emitted from the optical system in order to be guided, from the impact scene, with that angle of the missile in relation to the drone, it wouldn't have been able to receive guidance, Kornet would have to be launched with the drone heading in a straight line and maintaining a straight line for the Kornet rear sensors to ride the beam. For example, if the drone was heading perfect north, and saw a target perfect east, a Kornet could not be launched and sent towards the target without the Orion changing course for east. You can see it in the Ka-50/52, the pylons for Vikhr are articulated so that the back seekers can easily capture the laser beam.

IMHO it's either just Kornet being launched with Kh-50 impact footage, or the launch and impact of another missile, likely with close lineage and design to Kh-50 or LMUR.

EDIT: Maybe it could also be a guided S-8 or such type missile in a single canister. That would be a very cheap and effective option.
George1 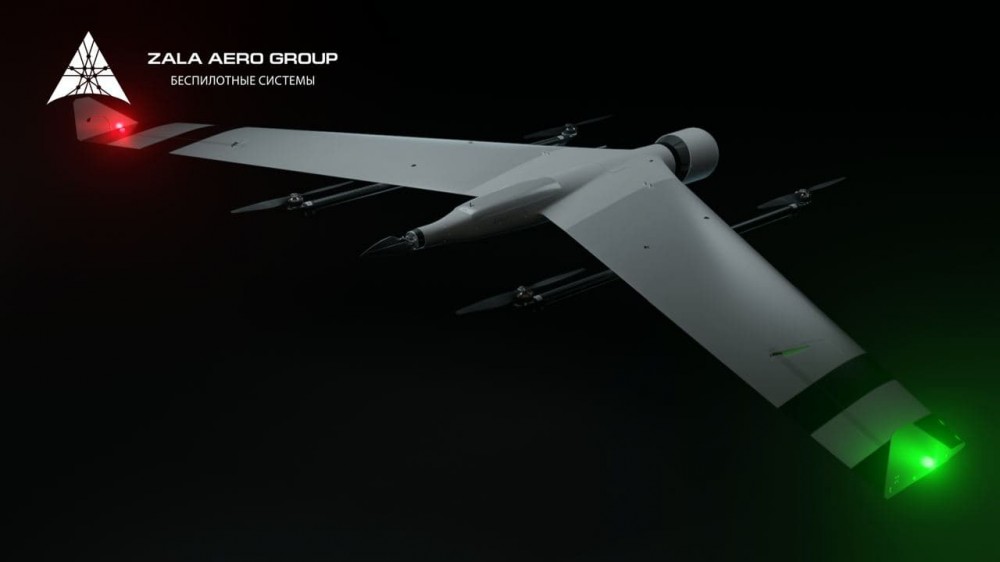 According to the telegram channel of the state corporation Rostec, the unmanned complex can be used for air monitoring, for example, in the interests of the fuel and energy complex, as well as during search and rescue operations.

The wingspan of the vehicle is 2.85 meters;

flight speed - up to 110 kilometers per hour.