Another An-148 for the Ministry of Defense of Russia

The tethered aerostat complex "Peresvet", which is planned to put a new generation of repeater
created in the interests of the Russian Defense Ministry, is entering a stage of state tests. 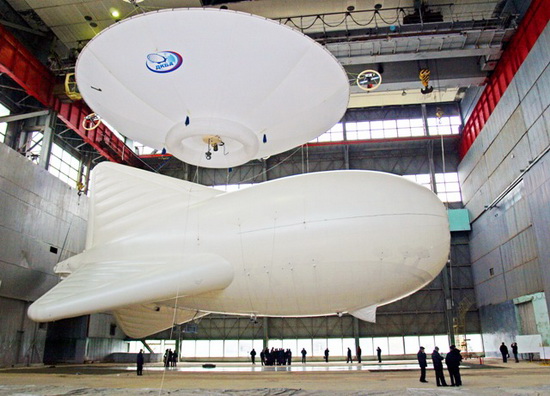 He noted that the supply of the complex "Peresvet" was provided by the arms program for the period up to 2020. "Previously, the expected supply of this year the first two sets, but due to the prolongation of state tests, delivery may be no earlier than 2016," - said the source.

Earlier it was reported that the tethered balloon "Peresvet" is a key element of a relay set of a new generation. According to the technical task of the balloon must "stand" in the air for 15 days with no additional gas filling, and at different heights (100, 300, 1000 and 3000 m). "Peresvet" volume is 2850 cubic meters at an altitude of 3000 m allows you to set the target load of 300 kg, and at altitudes of 1-1.5 km load increases to approximately 500 kg.

As the Voronezh plant complete the MoD's An-148 orders, will those be the last Antonov designed aircraft that will be procured by Russia?
GarryB

As the Voronezh plant complete the MoD's An-148 orders, will those be the last Antonov designed aircraft that will be procured by Russia?

the An-22 is useful, the An124 has been very useful and an An-225 will be more and more useful as the Russian space agency starts working with bigger and bigger rockets.

Odds are they might only make 3-5 250 ton payload class aircraft though india and china might want some too... there would certainly be a world market for maybe 10-15 such aircraft.

the 120-150 ton payload aircraft would be very useful for a variety of new roles with their new mobile armour units so they might plan for 80+ aircraft in this class for domestic use only... with world wide demand pretty high too as it is a useful weight capacity.

the 80 ton payload aircraft would be even more popular as a C-17 alternative without the horrendous cost and will likely be bought by the VDV as an An-70 replacement as well as the Russian air force.

In addition to those three related designs, there will be the Il-476 in the 60 ton payload class and a future possible replacement, the MTA developed with India as a replacement for the An-12, and the Il-114 and Il-112 or just two variants of the Il-112 to replace the An-26 and An-32... and finally the Ryachok to replace the venerable An-2.

A jet powered Il-112 or Il-114 would replace the An-72 in the role of 6 ton payload high speed jet if the MTA is deemed too big, but I think something could be worked out.
TR1

Ivan the Colorado wrote:As the Voronezh plant complete the MoD's An-148 orders, will those be the last Antonov designed aircraft that will be procured by Russia?

A small video from the Aviadarts-2015 exercise:

Five new models of aviation equipment, including Su-34 multi-role fighter bombers and modernized Su-27P fighters, have been received by aviation units of the Southern Military District located in the Rostov Region and the Republic of Crimea.

“Since the beginning of the year, the aviation units of the Southern Military District located in the Rostov Region and the Republic of Crimea received five new models of aviation equipment, including Su-34 [Fullback] multi-role fighter bombers and modernized Su-27P [Flanker] fighters. In the near future, another 40 units of modern aviation equipment are expected.”

According Shibitov, studies have shown that a helicopter at high speed - 500 km / h - it will be very expensive. For civilian users such speed was less important than the cost. "Therefore, from 2016 to continue creating long-term average of the helicopter at about 360 km / h for commercial applications that will incorporate what we have gained on the program at the moment," - said the representative of "Russian Helicopters".

"As for the military to continue the implementation of research work to further improve the speed - 460 km / h and above," - said Shibitov.

He said that for the first phase of the helicopter "Klimov" is working to modernize the VK-2500 engine. "The question is not necessary for the engines as a problem. We are fully equipped with the engine for the first stage", - said the representative of "Russian Helicopters".

Russia's Ministry of Defense is developing hardware and software for the unification of information and analytical flight safety systems for the air force.

A demo version of the system is expected to be unveiled at a joint training meeting involving high ranking officials from the flight safety services. The meeting will take place on May 19-21.

"After testing and debugging, the unified flight safety system will be introduced on all air force units of Russia's Armed Forces. Other entities of the state aviation will be incorporated into the system," said Major-General Alexander Berzan, the chief of Aviation Safety in the Russian Armed Forces.

The unified system is based on a series of information systems designed to gather, store, visualize, analyze and simulate flight safety data, Russia's Ministry of Defense noted.

"Functionally the system comprises command facilities of the Ministry's air force units. In the long term it could include cooperating federal agencies and other interested parties," Russia's Ministry of Defense added.

Problems with the supply of amphibious aircraft Be-200
franco

A new one?
Svyatoslavich

Very beautiful. Does anyone know if this is a replica or an original airframe?
PapaDragon

Very beautiful. Does anyone know if this is a replica or an original airframe?

I think that it is original, I got the pic from Rogozin's Facebook article about restoring old aircraft.

Renovated An-22 of Russian Air Force

It's a multi-channel laser-beam guidance system (LSN) for the Ka-52, Mi-8MNP, Mi-28N. The new development will provide high precision missile guidance and allow helicopters to use missiles of various types. It can also be integrated with drones, Manpads and other ground based equipment


LSN is designed to perform tasks of locking onto the target and guiding the missile to the target, which can be achieved automaticaly or manually by an operator.

The system uses a powerful CW solid-state laser pumped by laser diodes. Scanning of a laser beam is a compact, low-inertia, two-coordinate acousto-optic deflector, without mechanical parts operated by electric signals. In other similar products (of competitors), the control field is created purely by mechanical means, which leads to lower performance, lower reliability, increased size and mass.

"Concern established for manufacturing of high-tech and innovative systems and introducing them to the series. They should be universal, in other words - it must be installed on old and new equipment, – said the first Deputy General Director KRET Igor Nasenkov. – Modern laser technology KRET fully meet these requirements. In particular, the LSN can be installed on helicopters and ground vehicles, MANPADS and drones".

The LSN test confirmed the high precision guided missiles and high reliability of the developed instrument. The laser guidance system is commercially available at KRET.