Some interesting info for Tu-160M

- The Tu-160, which was raised in January 2018 was completed from the Soviet backlog and will be modernized. The improvements affect not weapons, not engines, but only electronic equipment: aircraft control, navigation and defense systems are completely new.

- The creation of the Tu-160M ​​fleet is divided into two sub-tasks: the modernization of the existing 15 White Swans and the construction of new ones (a contract, recall, was concluded for 10 missile carriers).

- According to known data, the first delivery of the aircraft built from scratch is planned for the end of 2022. Work has already begun.

The first flight of the prototype strategic bomber Tu-160M

The Ministry of Defense of the Russian Federation distributed a video of the first flight of the first experimental modernized strategic bomber Tu-160M, which took place on February 2, 2020 at the airport of the Kazan Aviation Plant (KAZ) named after S.P. Gorbunov - a branch of PJSC Tupolev (as part of JSC United Aircraft Corporation - UAC).

As follows from the video, the first prototype of the upgraded Tu-160M, it was not the Tu-160 plane with serial number 2-02 (the fourth built serial Tu-160, board number "19", proper name "Valentin Bliznyuk") that was converted, as our blog earlier mistakenly reported, but another board - combat bomber with serial number 4-05 and the name "Igor Sikorsky" (previously had tail number "14" and registration number RF-94103). This aircraft made its first flight in 1988 and was one of the eight Tu-160s received by the Russian side in 1999 from Ukraine from the former 184th Guards Heavy Bomber Regiment in Priluki. The aircraft has been on KAP since 2014.

It was reported that the Tu-160 aircraft modernization project into the Tu-160M ​​variant (“70M product”) was approved on October 23, 2014. In total, 15 Tu-160 combat aircraft of the Russian Air Force should be upgraded to the level of Tu-160M, and under the contract of the Russian Ministry of Defense with PJSC Tupolev in January 2018 worth 160 billion rubles at KAZ, ten new Tu-160M bombers should be built by 2027. According to known data, the first flight of the first of them is planned for 2021 with the beginning of deliveries in 2023. 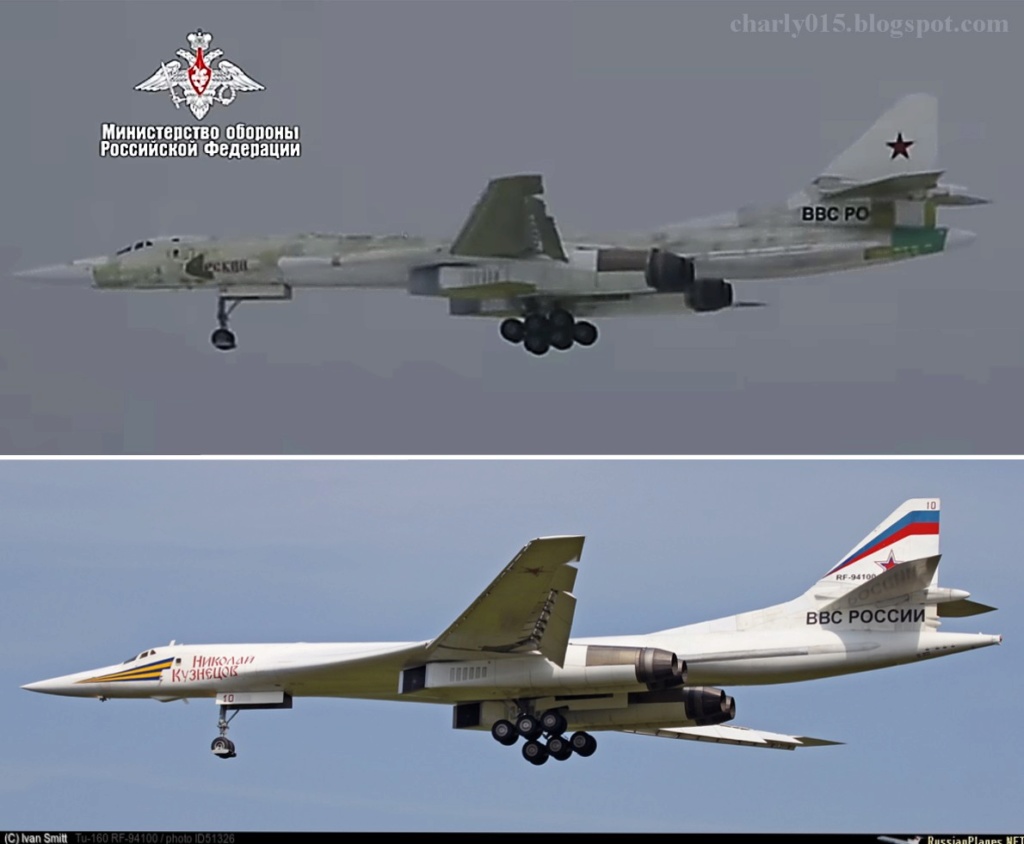 Few years go, Russians said, that they will install modified Irbis radar from Su-35 to their strategic bombers. I wonder if this new Tu-160M is equipped with Irbis radar.
Tsavo Lion

Source: Tu-160 is planned to arm with hypersonic missiles

MOSCOW, February 10. /TASS/. Russian supersonic strategic bombers Tu-160 is planned to equip hypersonic missile complex "Dagger", the design of the project should be completed by the end of 2020. This was announced on Monday, the TASS source in the military-industrial complex.

"The possibility of installing dagger missiles on the Tu-160 is being considered. The development of such an option should be completed this year," the source said.

He did not specify whether the “Daggers” would be equipped with the Tu-160 combatant, or if the modernized Tu-160M ​​would become their carriers.

TASS does not have official confirmation of the information provided by the source.

In July 2018, another source in the Russian military-industrial complex told TASS that it was planned to test Dagger hypersonic missiles on a Tu-22M3 long-range bomber.

Tu-160 is a multi-mode supersonic strategic missile carrier with variable wing geometry. In 2015, it became known about the decision to resume production of the Tu-160 in the upgraded version of the Tu-160M. February 2, the experimental Tu-160M, created on the basis of the combatant Tu-160, first took off. The airplane updated its navigation and navigation equipment, communications system, control system, radar station, electronic countermeasures system. The bomber is capable of carrying up to 12 strategic cruise missiles on two multi-position rotary launchers inside the fuselage.


if this ide will materialize then will Tu-22M3M not carry Kinzhal?

"The possibility of deploying Kinzhal missiles on Tu-160 aircraft is being considered. The work on this option is due to be completed this year," the source said.
Read also
Russia’s 1st upgraded Tu-160M strategic bomber enters trials

The source did not specify, however, whether operational or upgraded Tu-160 bombers would be armed with Kinzhal hypersonic missiles.

Kinzhals carried by Tu-160 means that enemy surface ships can be attacked over intercontinental ranges. Lets say the Tu-160 cruises at low level subsonic M0.7-0.8 for 5000kms to get near the release point, spends some fuel getting to altitude and M1.5-2, and launches Kinzhals with 2000km range.

That's a 7000km attack range from Engels base, enough to fly North across Russia, around Murmansk, penetrate GUIK gap and target enemy ships in the North Atlantic. Add in-flight refuelling for even more range.

And from bases in the RFE, S. Russia/Iran, Cuba, Venezuela, Nicaragua, S. Africa they can control most of the World Ocean, even w/o refueling.

They are quite fat missiles though... I would expect you probably wouldn't get more than two in each weapon bay... it is not like the Tu-22M3M which can carry them externally and perhaps carry four on standard hardpoints and then perhaps have another 6 weapons in the internal rotary launcher... range would not compare with the White Swan, but with inflight refuelling restored... it would be interesting.

I suspect a new huge strategic model of Zircon would be much more interesting...
magnumcromagnon 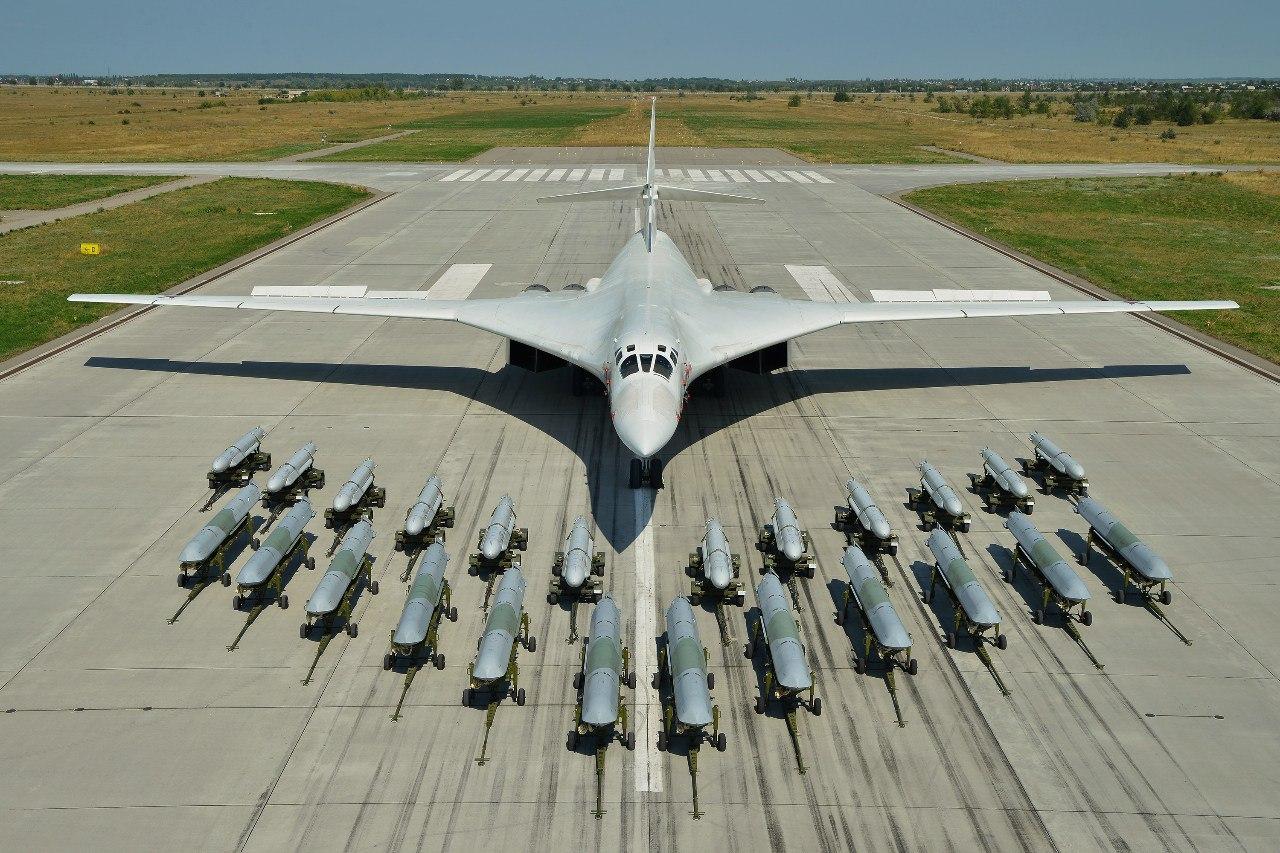 Thanks. What puzzled me was the Bear photo in the other thread taken at the same time with its loadout looks to be carryable.
JohninMK

Thanks. What puzzled me was the Bear photo in the other thread taken at the same time with its loadout looks to be carryable.

I don't think so. The bear can carry kh-55/101 only externally and has only 8 hardpoints for them and on the picture you have 12 or 14 missiles I think.

With the new missile developed for su-57 they could double the number of missile but for a reduced range compare to the huge kh-101.
Hole

Are you suure about weapon bays ?

The Tu-95MS16 was designed originally to carry the Kh-55SM, and carried 6 missiles on an internal rotary launcher. It carried a further ten Kh-55SM missiles on external weapon hard points, the two inner pylons had three missiles each and the two outer under wing pylons carried two missiles each for a total of 10 missiles under wing on external weapon pylons and 6 missiles internally... hence the 16 in the aircraft designation.

The Kh-55SM is the extended range 3,000km range upgrade of the Kh-55S, visible by its external conformal fuel tanks to increase range from the original missile (of about 2,500km). The other missile is the Kh-555 with a conventional warhead and a flight range of about 2,800km... none of these missiles are related to the navy missile Granat which the Club family of missiles is based upon that has a range of 2,000km in its original version.

Wow that is super cool!!

Baby can you light my fire…