GarryB wrote:My understanding was that the vehicle was too small and they made it bigger to handle all the extra gear from Ratnik for each soldier... it consists of nets covering the sides of the vehicle where backpacks and equipment can be hung for the troops inside the vehicle.

The frontal armour of Boomerang should be excellent against enemy 30mm cannons and smaller at 2km range, which means a 125mm gun armed Boomerang would kick arse against something like a Bradley because at 2km the 25mm cannon of the American vehicle would do very little damage to the Boomerang, while the damage a 125mm tank round could do to a Bradley or any other enemy BMP would be obvious.

The future direction is to make Boomerang divisions where all 27 vehicle types in each division is Boomerang based, so logistics just need to carry one type of wheel, and support one engine and transmission type and work with one vehicle to support the entire unit.

That means putting Sprut or T-14 turrets on one to make it a tank...

Any obstacle they come across the mobility will be similar... all amphibious, all wheeled... similar protection all latest weapons and communications equipment.

The Typhoon family of four and six wheeled vehicles might be too light for the 125mm gun of the Sprut, but the Sprut is an 18 ton light tank so it is about 8 tons lighter than the Boomerang tank will weigh...

Long range accurate powerful fire power is always useful... it is the 70 ton super heavy tank that breaks all the bridges and ruins roads that is not wanted much of the time.

And I'll add that a wheeled brigade is not necessarily going to be used where the enemy will have armour formations anyway, not major ones. Rather IFVs, anti-armour and urban defenses.

It's a fast mobile brigade that's useful where the road network is plenty developed. You're not going to get it to go cross-country or carry out breakthroughs. 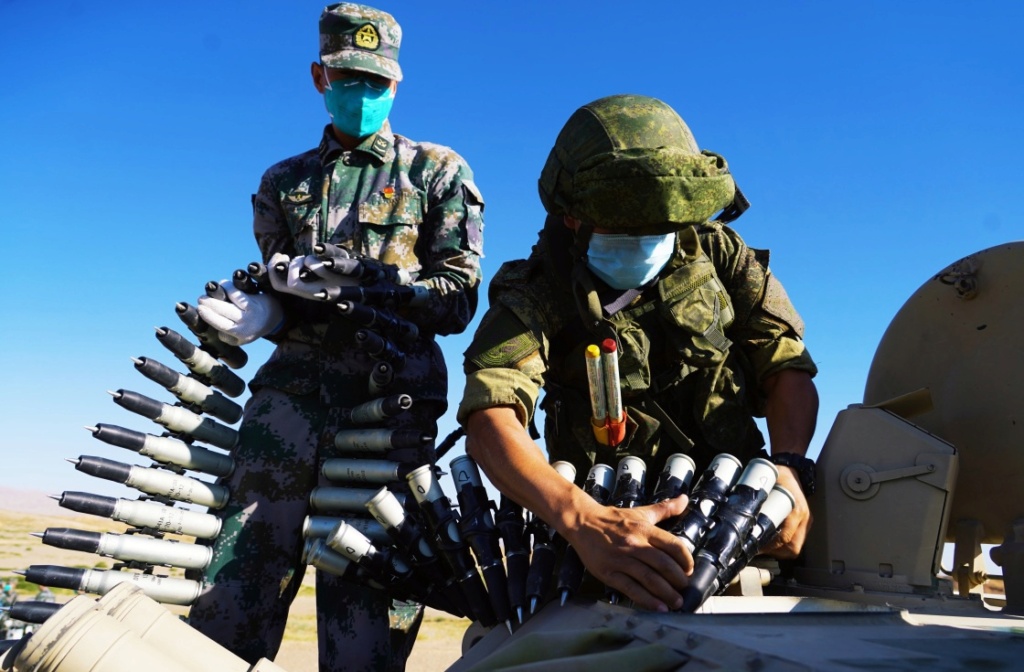 A whole link of APFSDS rounds? The Chinese are indulging the Russians

Isos wrote:They already tested italian Centoro similar to this chinese tank. I don't think they were happy with the design since 30mm equiped vehicles have the advantage over this thing.

It's poorly armored and would be easily destroyed. Specially at close range where rpg will be quicker to use than using this gun.

Put an APS on it and its immune to most man portable anti-tank weaponry. 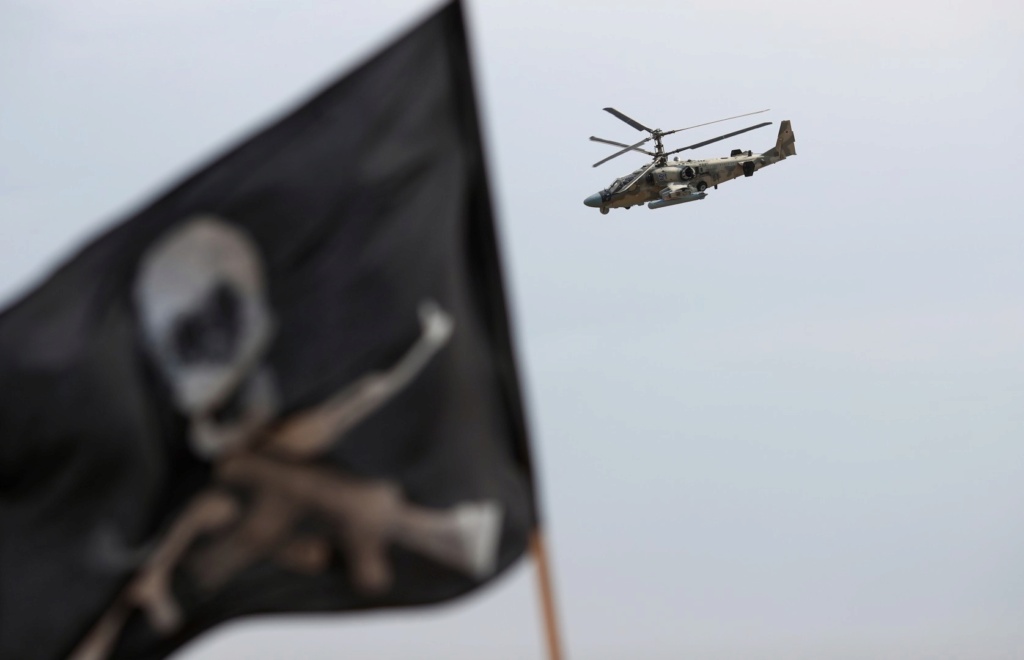 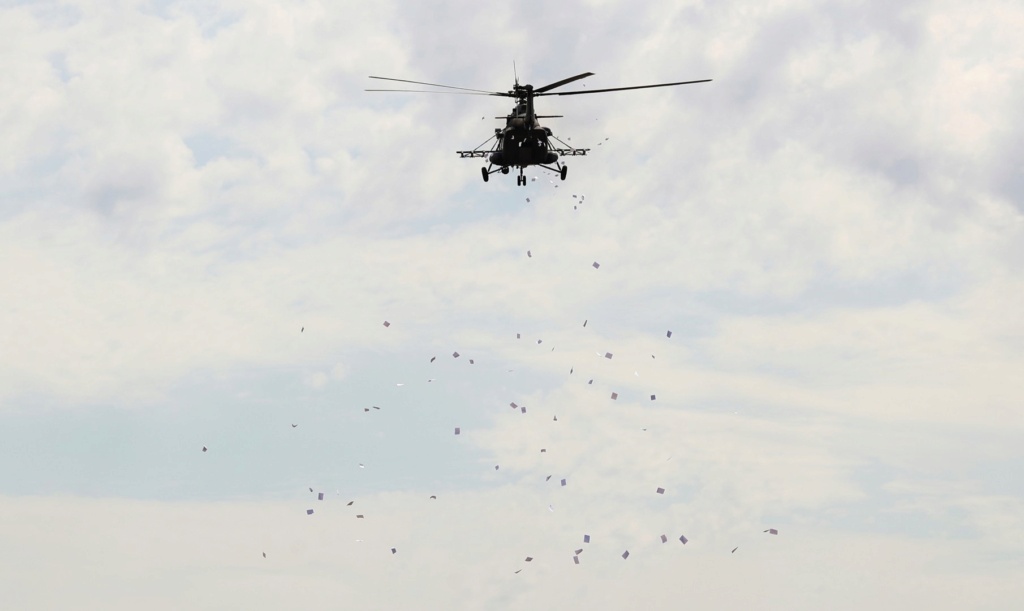 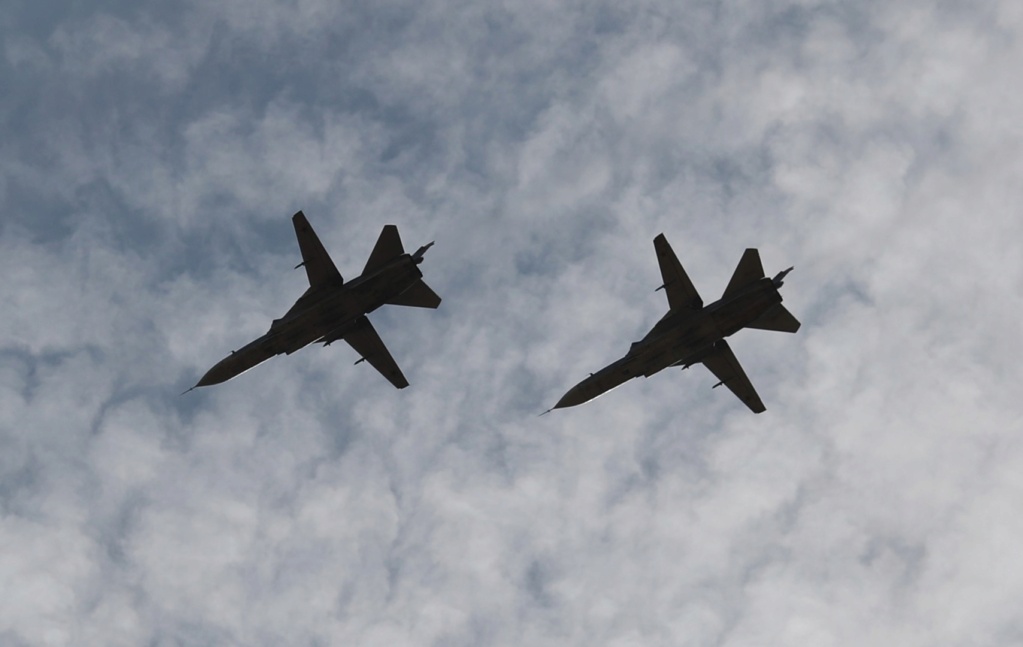 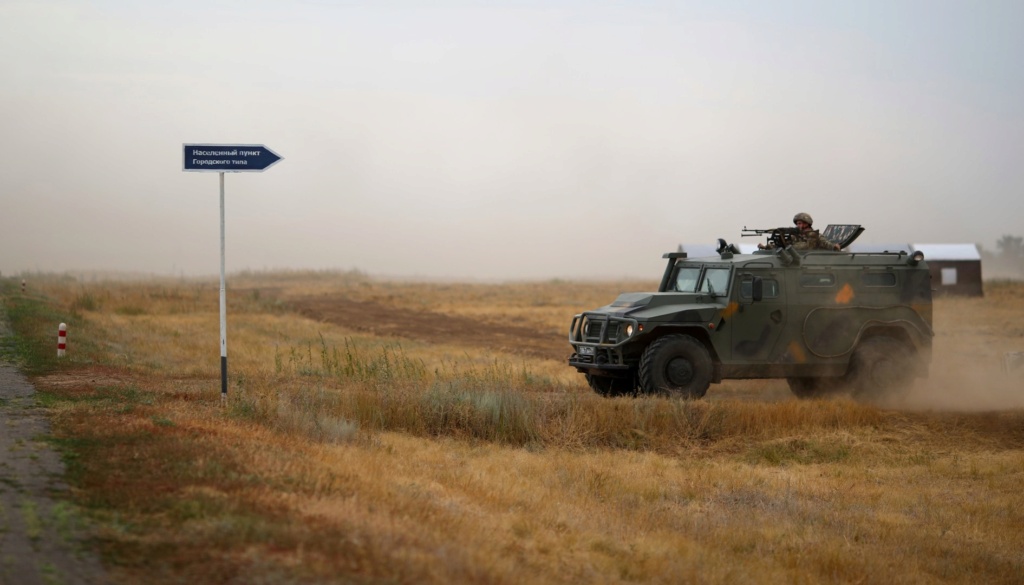 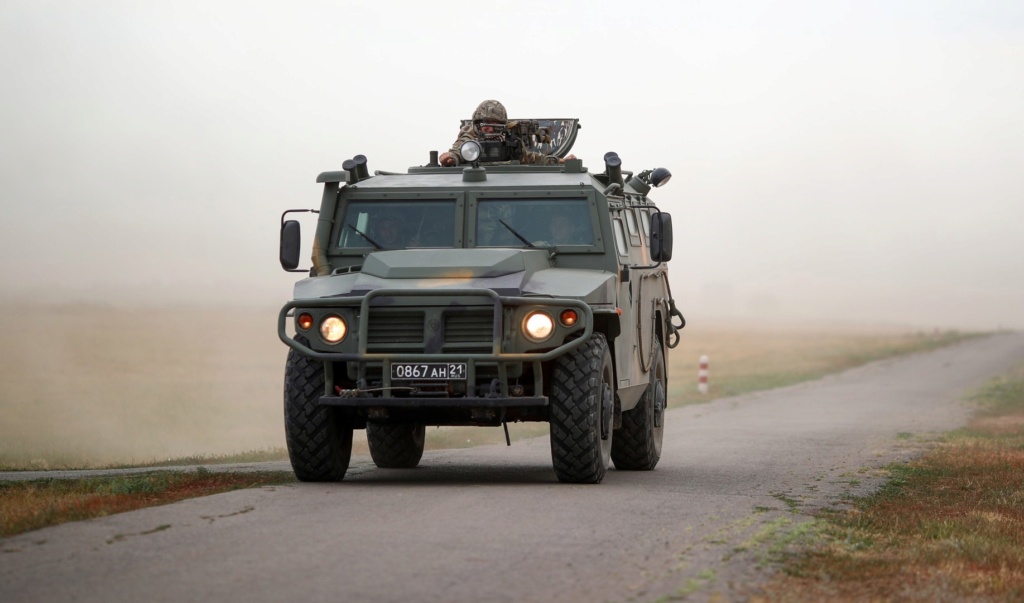 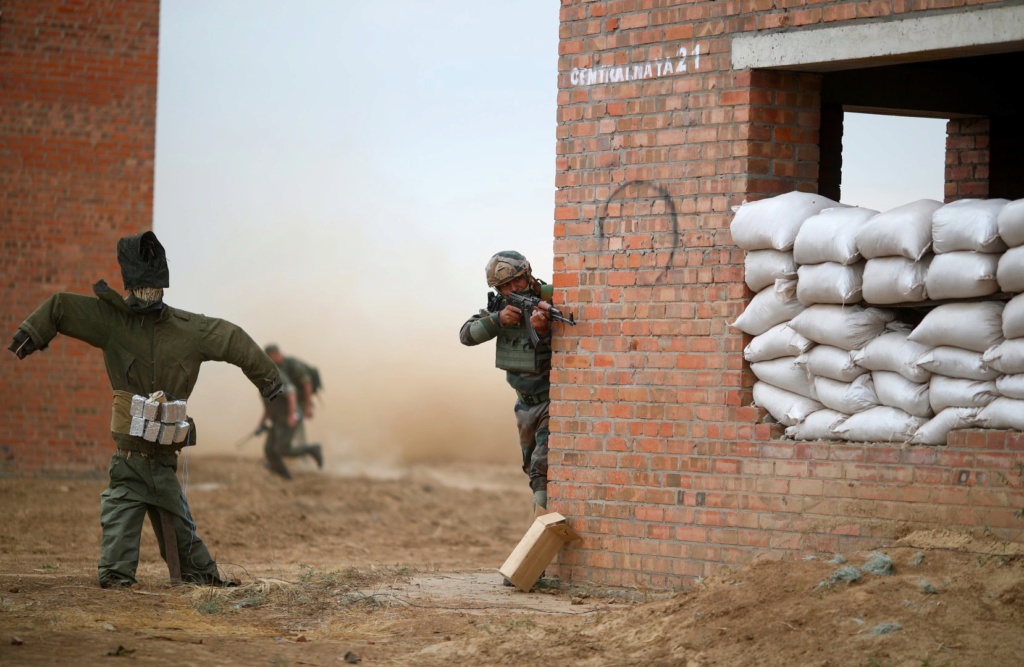 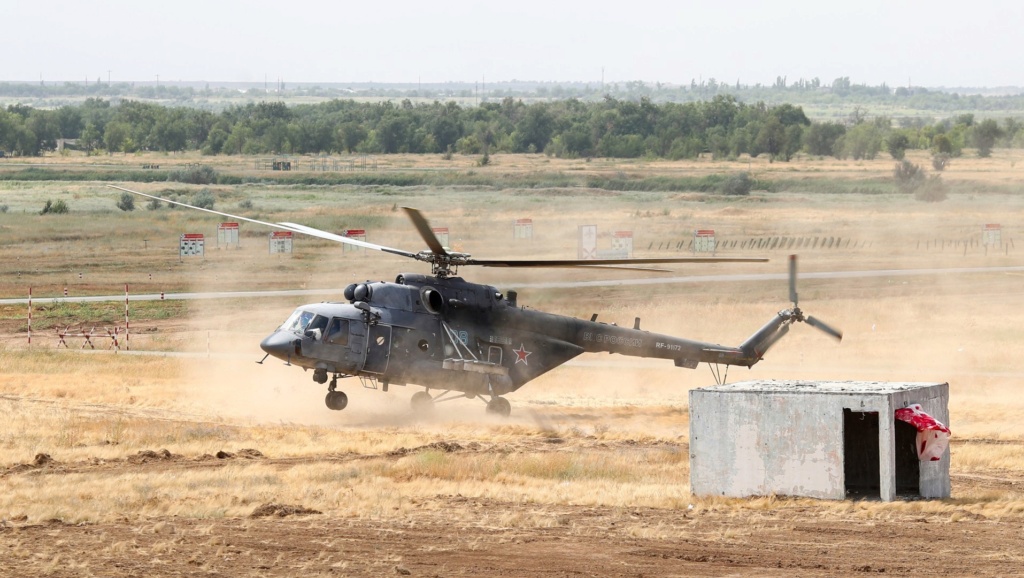 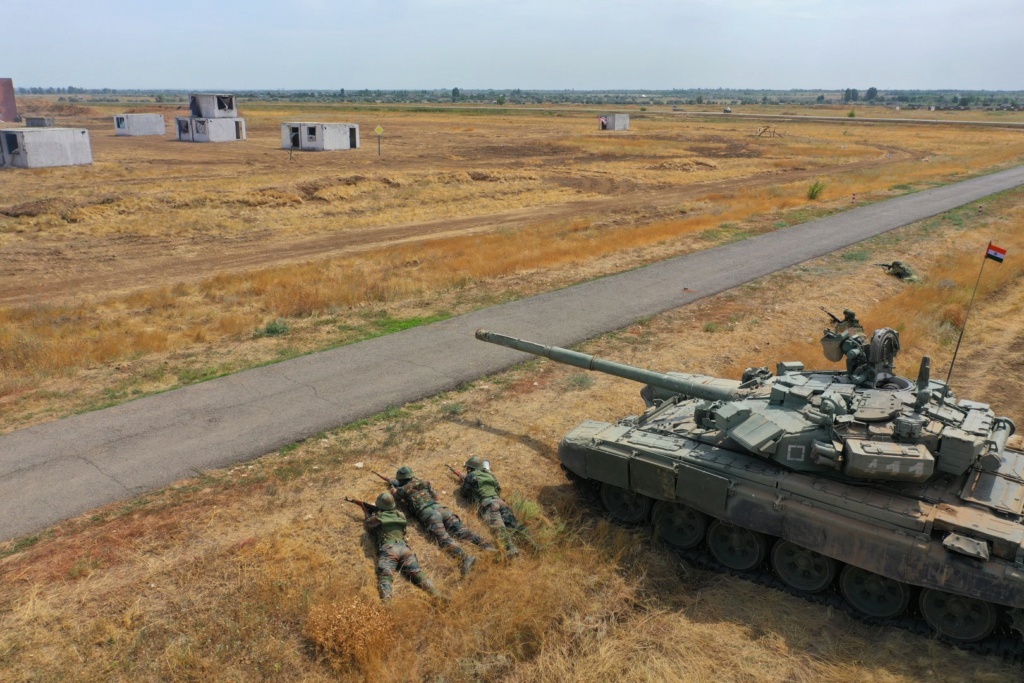 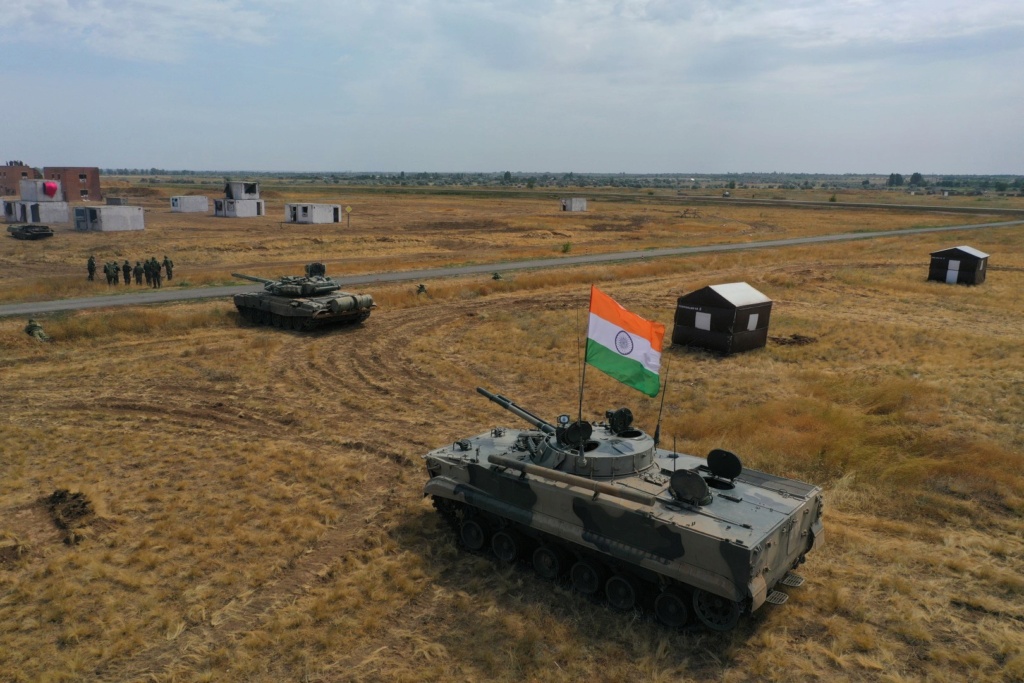 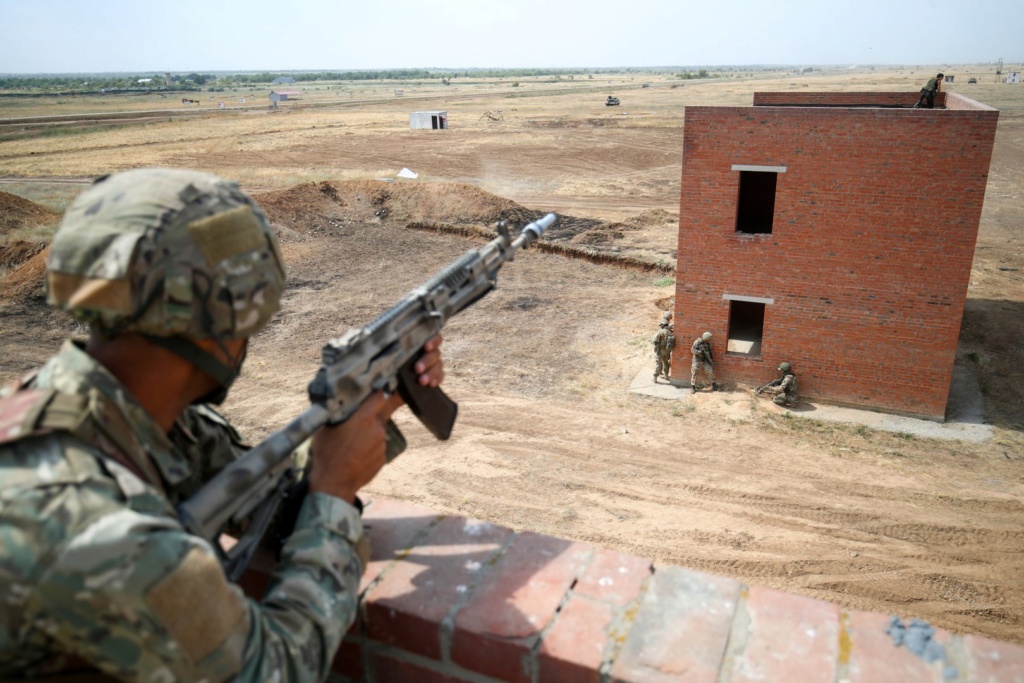 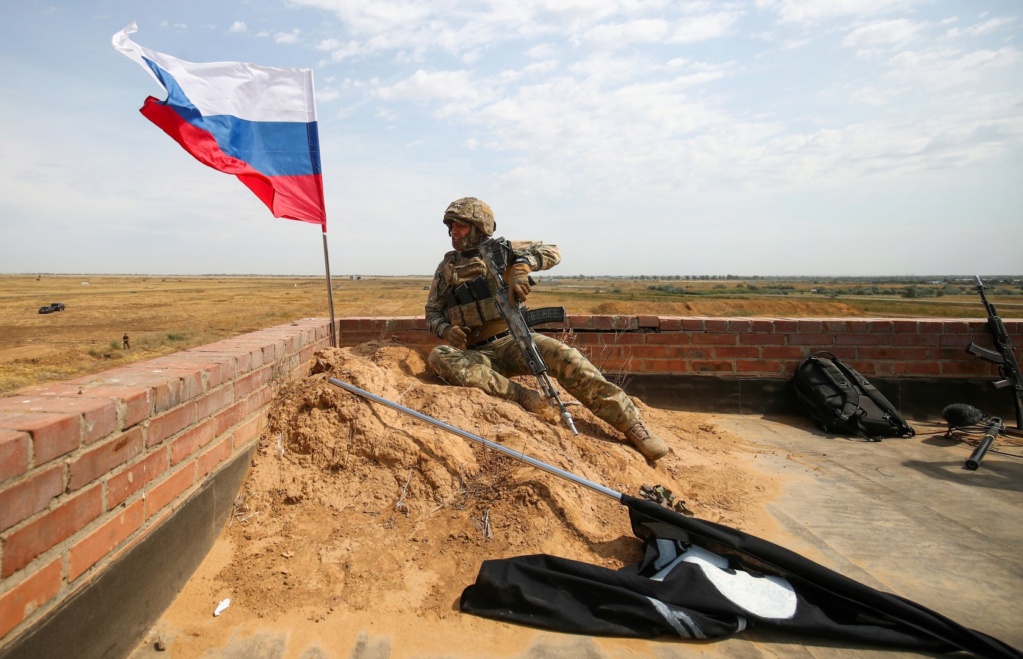 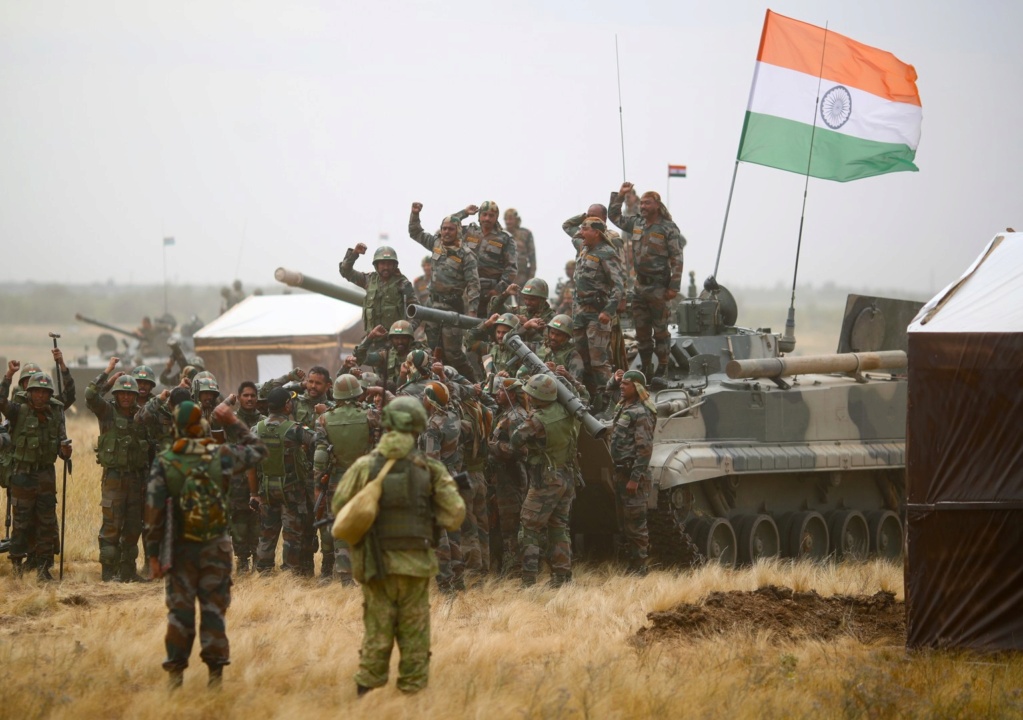 The 201st Russian military base has completed joint exercises with the armies of Tajikistan and Uzbekistan. More than 2.5 thousand servicemen were involved in the exercises with the use of ground equipment and aviation, of which about 1,800 represented the Russian contingent.

New types of weapons were also demonstrated to the military delegations of the participating countries of the exercises. 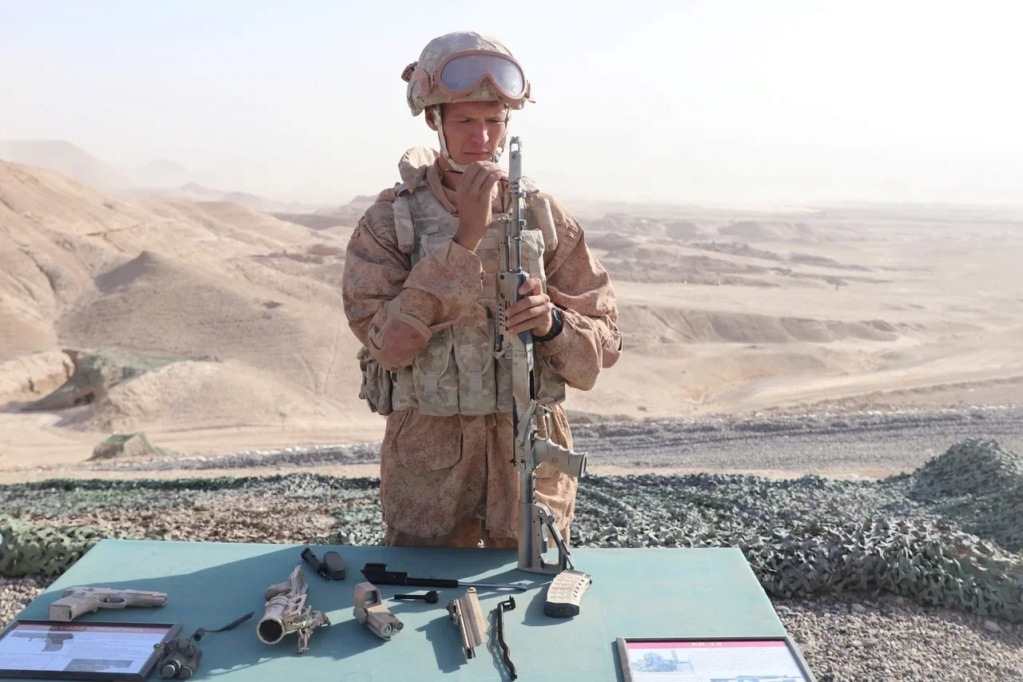 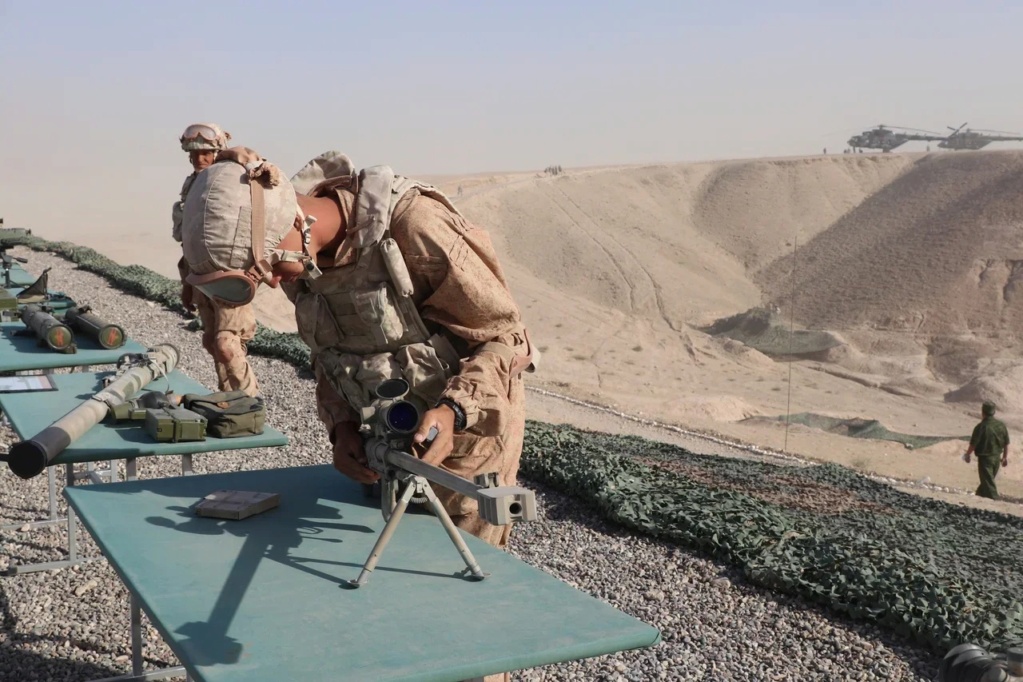 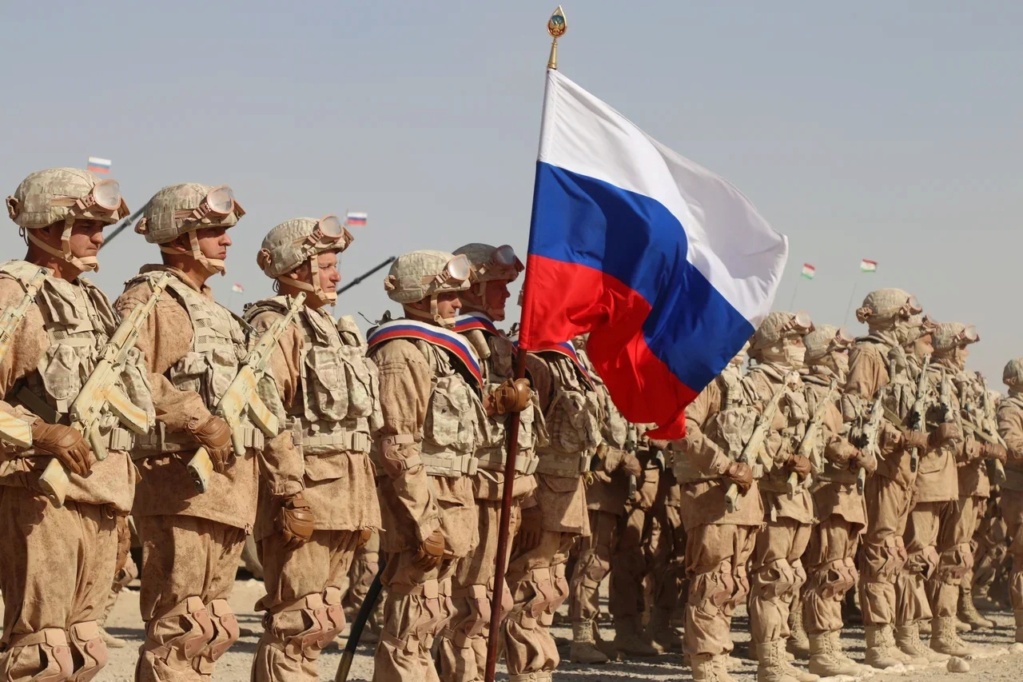 And I'll add that a wheeled brigade is not necessarily going to be used where the enemy will have armour formations anyway, not major ones.

Drive a wheeled unit 4,000km and you would do it in record time over a couple of days. Do that with a tracked unit and expect it to take weeks and also expect a lot of the vehicles to need to go into overhaul...

The speed and range of wheeled vehicles is a huge advantage in places with good road systems. Even cross country mobility isn't bad and you can work together to pull each other out of scrapes.


A whole link of APFSDS rounds? The Chinese are indulging the Russians

You can't mix a belt of APFSDS rounds with normal rounds because they have a totally different weight and drag and velocity so they would not go to the same point of aim as standard HE rounds.

Small fast APFSDS shoot very flat while big heavy full calibre high drag HEI rounds start much slower and slow down even faster, so using an APFSDS aim point the HE rounds would drop way short of the target, or if zeroed for the HEI rounds the HEI rounds will be on target and the APFSDS would zip over the target at an enormous height...
George1

Large-scale wargames have been held in Tajikistan, bringing together soldiers from three former Soviet republics to practice targeting enemy combatants and securing the border with neighboring Afghanistan, as the US withdraws.

The Russian-Mongolian exercises "Selenga-2021" will be held on the territory of Mongolia from September 20 to October 5, about 1.400 servicemen from both countries will take part in the maneuvers.

Interesting! Domestic version of Russian military hardware is far more hitech than export version of that same hardware primarily because technologies considered to be sensitive are removed from the export version.

However, this report says, Indian Army will use Russian military hardware (meaning domestic version) during Zapad2021.

The Russians have traditionally (1990s onwards) sold India stuff that was better than the stuff their own armed forces were buying at the time... there will be a lot of changes made, but that is because the sub they will be handing over will not be nuclear or strategic weapon capable so they need to swap out both navigation and communication systems that are designed to receive orders from secret Russian nuclear systems and also to allow strategic nuclear weapons to be loaded... programmed with target information and fired.

There might be stuff India wants that is added, and there will be stuff they are not allowed access to... but also would not be able to use anyway.

The age of the sub being transferred means it might not actually be so much of a case of a downgrade but an upgrade of modern systems that are currently going on their current subs tweaked a little to not include strategic nuclear weapons be used, so it might be getting an upgrade to improve performance but with the more secret stuff removed for an ally that does not have teh strategic weapons the removed equipment is designed to operate with... ie, 5,500km range conventional land attack upgraded Calibres removed replaced by 480km range export model calibres but perhaps 800km range mach 2.5 Onyxs missiles replaced by mach 2.5 Brahmos missiles with a 600km range that you made yourself. (India).

Whereas if it was being upgraded for the Russian military it would be 1,200km range Zircon mach 9 missiles being installed instead of mach 2.5, 600km range Brahmos.

In the course of the drills, the troops will test new methods of conducting joint combat operations, considering the development of advanced armaments and the tactic of terrorist formations

YEKATERINBURG, September 20. /TASS/. The member states of the Shanghai Cooperation Organization (SCO) kicked off the Peace Mission 2021 anti-terror drills at the Donguz training ground in the Orenburg Region in the Urals, Commander of Russia’s Central Military District Colonel-General Alexander Lapin announced on Monday.

"Over 5,000 troops from nine states will demonstrate their readiness for joint operations to rout large outlawed armed gangs and neutralize terrorist threats. For the first time ever, the military contingent of the Republic of Belarus is taking part in the drills," the District’s press office quoted the commander as saying.

In the course of the drills, the troops will test new methods of conducting joint combat operations, considering the development of advanced armaments and the tactic of terrorist formations. The exercise will run in two stages and during its active phase the coalition force will practice joint measures in five operational episodes, the commander said.

The Peace Mission 2021 anti-terror exercise is running on September 20-24. Overall, the drills will involve about 5,500 troops and over 1,200 items of armament, military and special hardware. These maneuvers have been held every two years since the organization’s creation. The first such exercise took place on the territory of Kazakhstan and China in August 2003.

Pakistani servicemen have mastered the use of Uran-6 robots at the Druzhba-2021 joint exercise. 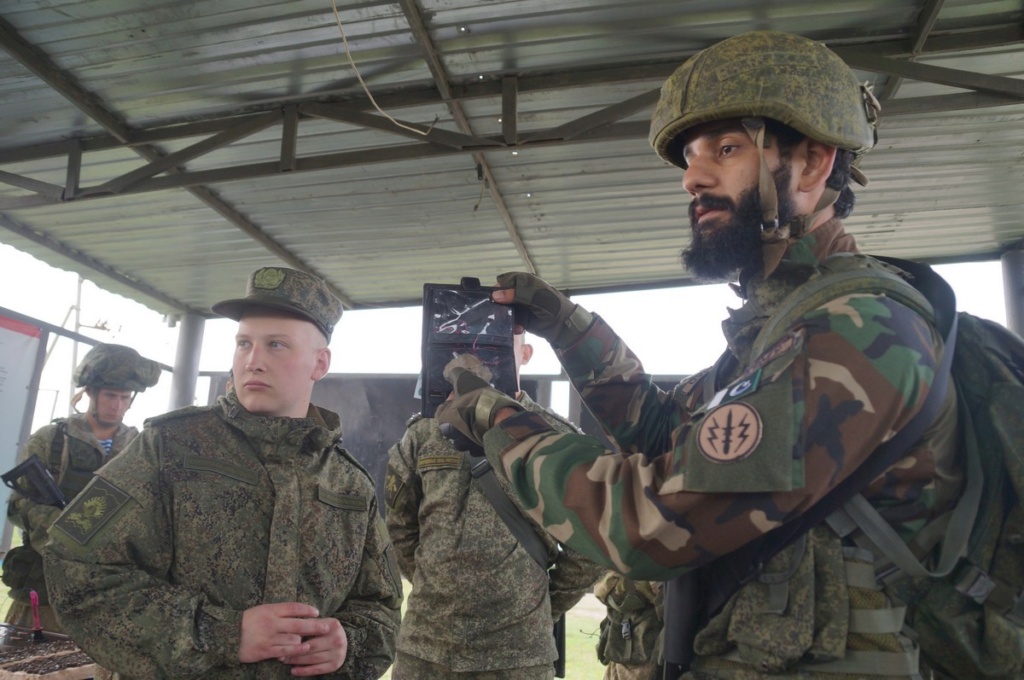 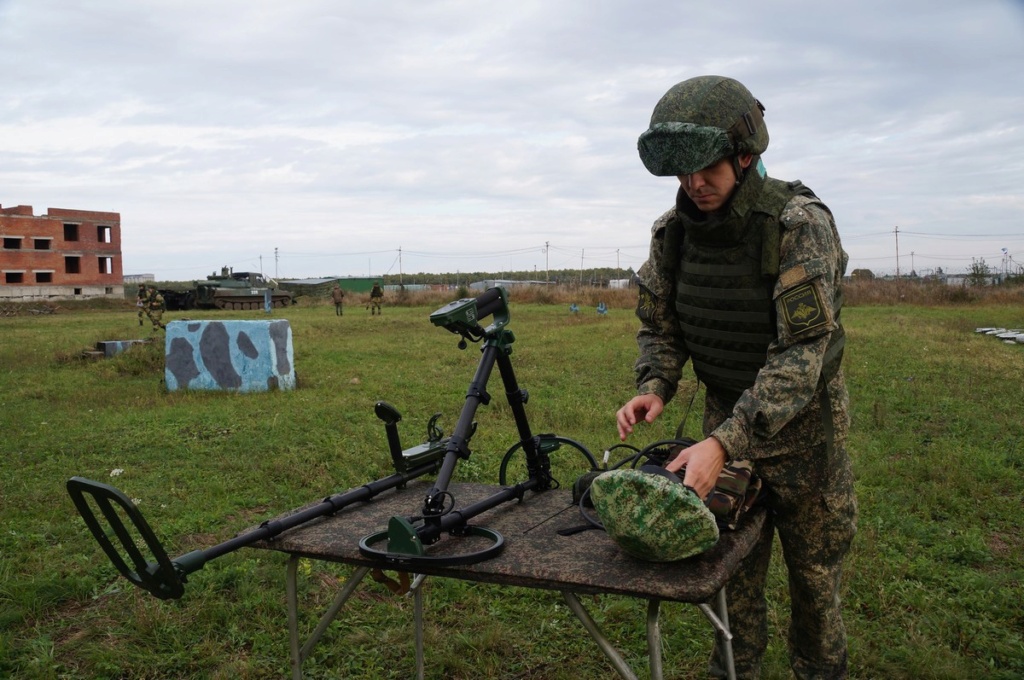 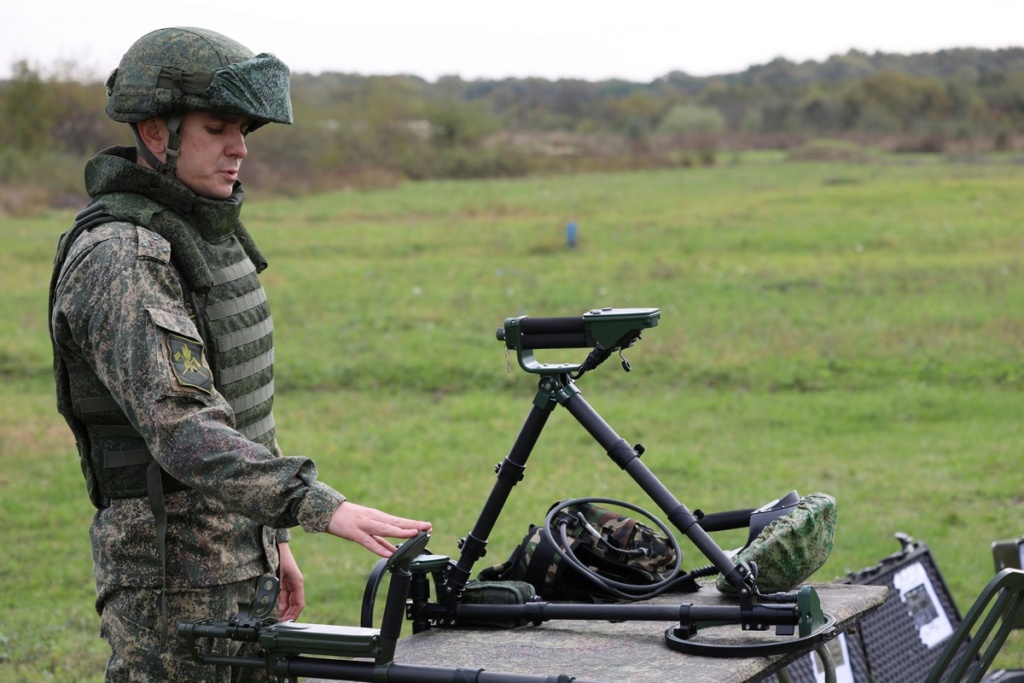 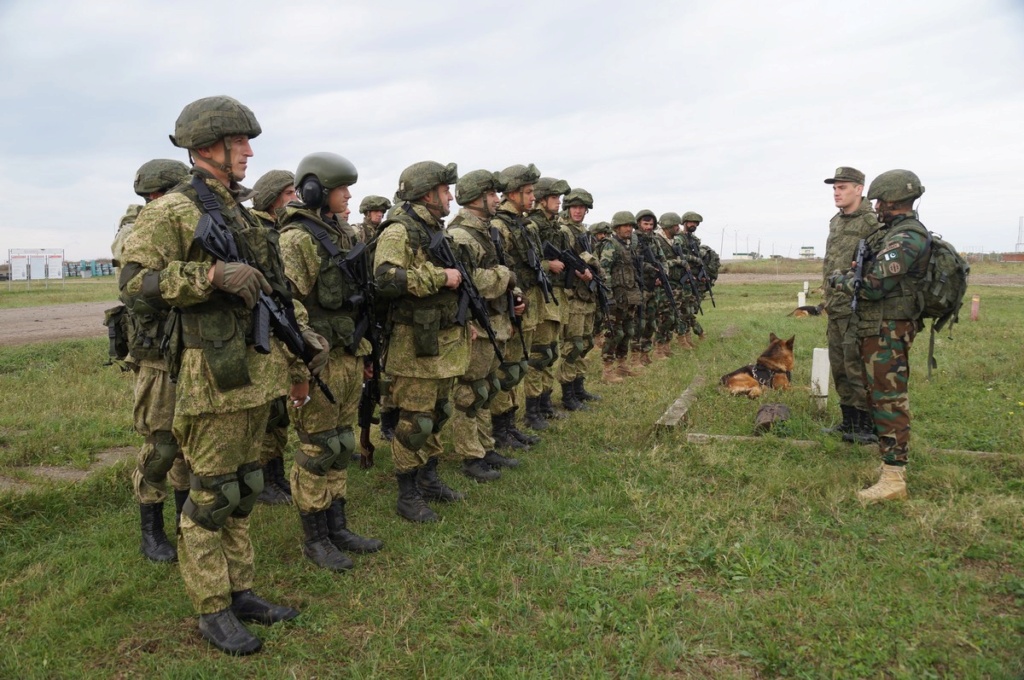 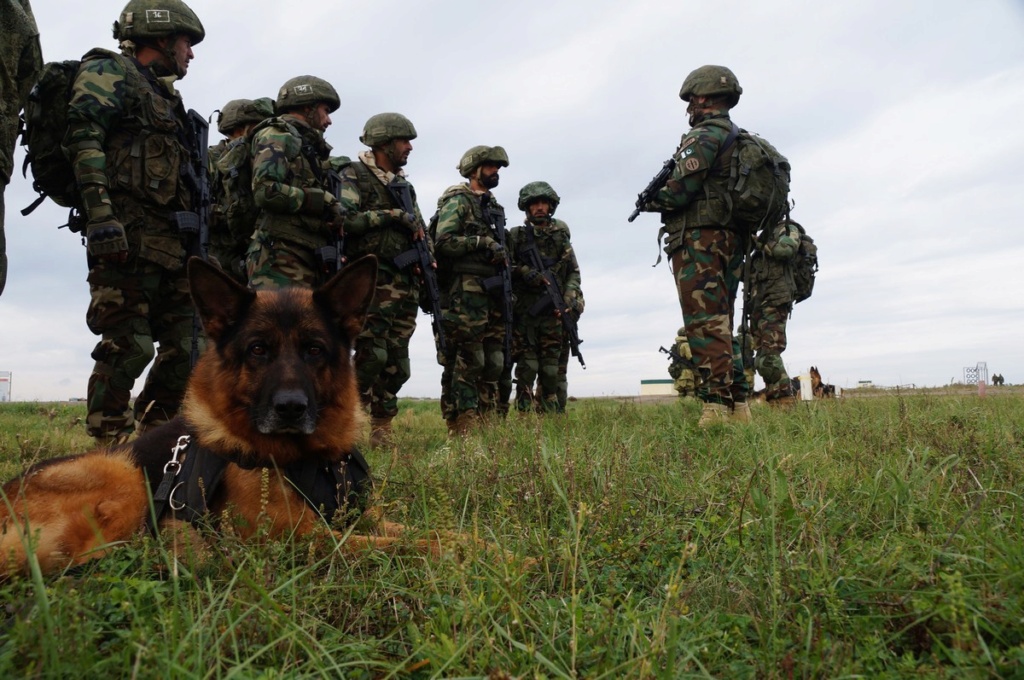 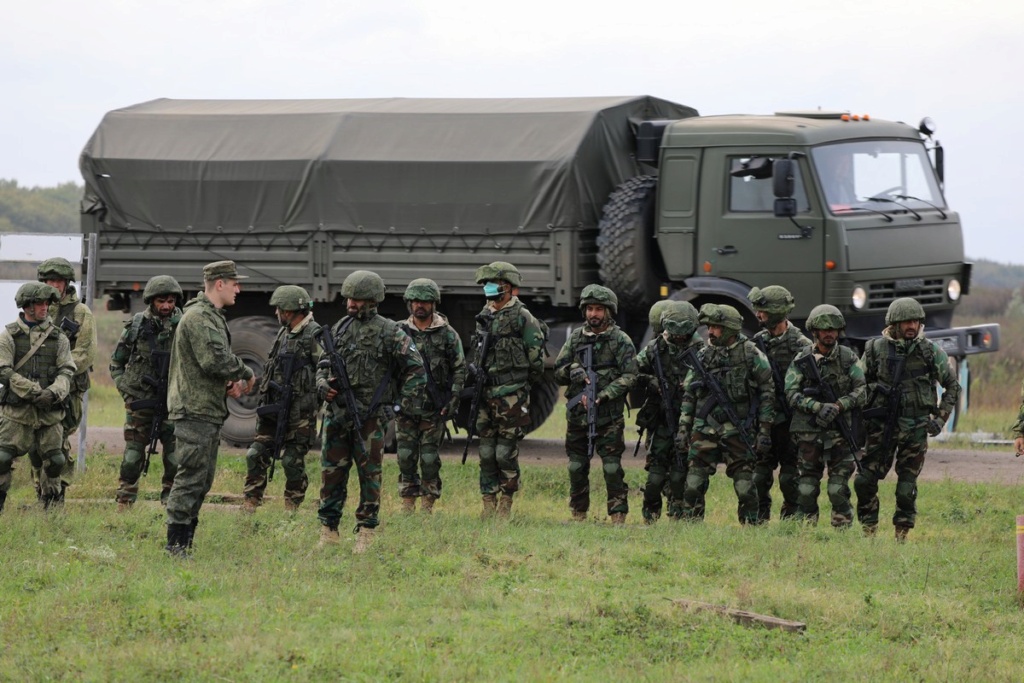 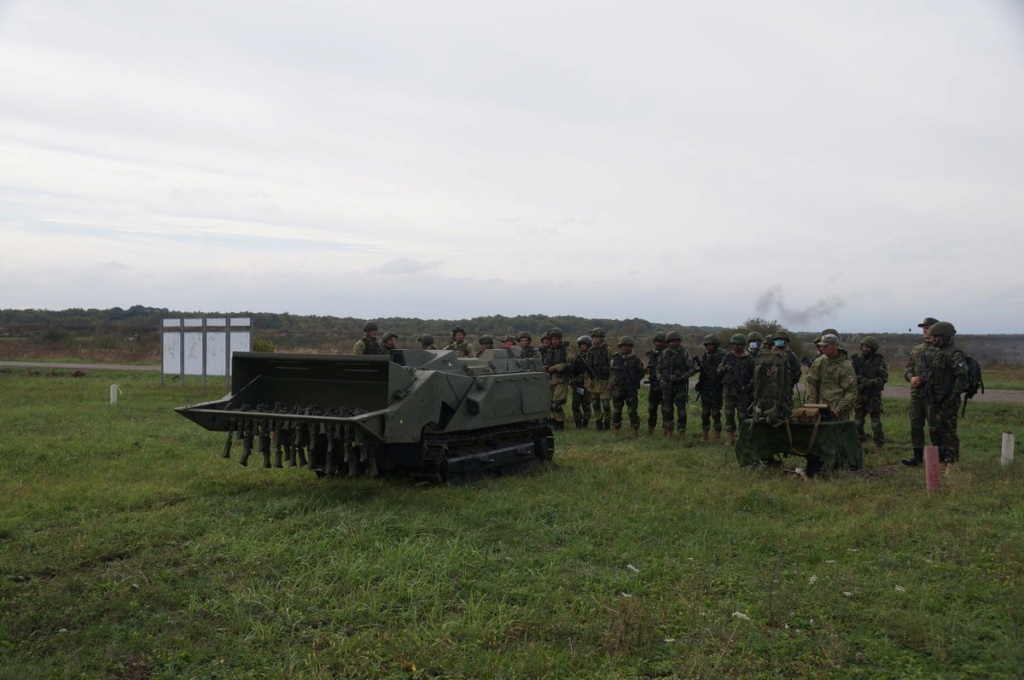 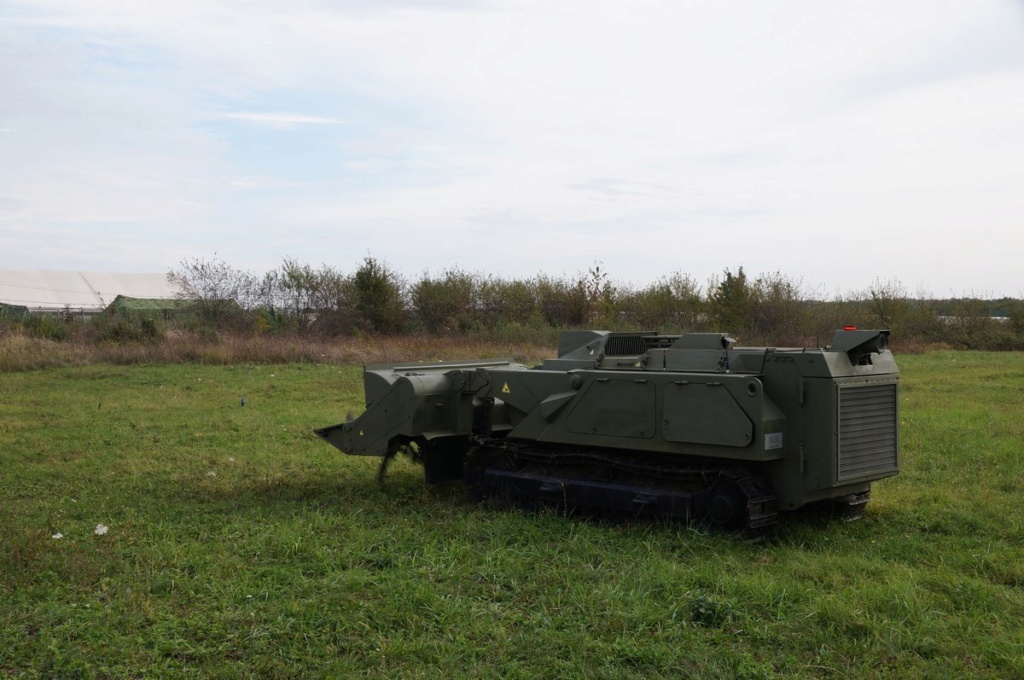 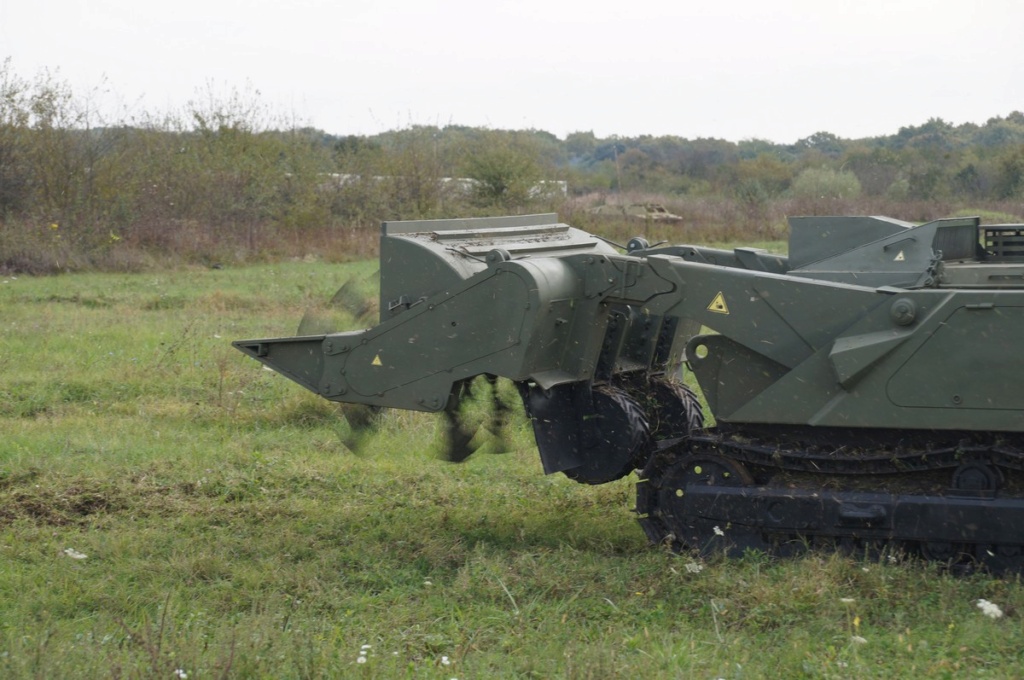 Any news/photos on the joint Russian-Algerian exercise in North Ossetia?
George1

BARS-2021, a joint aviation exercise with Russia, kicked off in Serbia

A joint Russian-Serbian tactical flight exercise BARS-2021 has started in Serbia. According to the press service of the Ministry of Defense, MiG-29 fighters and helicopters of the Serbian Air Force were involved in the exercises.

The Russian-Serbian exercises "Bars" (Brotherhood of Aviators of Russia and Serbia) are annual and are held alternately on the territory of the two countries. This year they started on October 11 in Serbia and will last until the 16th. They involve MiG-29 aircraft and Mi-8 and Mi-35 helicopters of the Air Force and Air Defense Forces of Serbia. The exercises will take place at two airfields at once - Batainitsa and Ladzhevtsi.

As part of the exercise, joint Russian-Serbian crews on MiG-29 fighters will practice combat maneuvering and air combat as part of a pair and perform attacks on low-speed targets. The Mi-8 and Mi-35 helicopters will be used for landing and evacuation, complex aerobatics, combat use and other tasks.


It is noted that before the start of the exercises, Russian pilots were trained aviation terminology and phraseology of radio exchange in the Serbian language.

The joint Russian-Serbian tactical flight exercise BARS has been held annually since 2015.

Russian and Algerian servicemen at a joint exercise in North Ossetia

The final stage of the joint Russian-Pakistani exercise "Friendship 2021"

A joint Russian-Chinese naval exercise is being held in the Sea of Japan from October 14 to 17. The Russian Navy is represented by warships and support vessels of the Pacific Fleet: the large anti-submarine ship Admiral Panteleev, the corvettes of the project 20380 Hero of the Russian Federation Aldar Tsydenzhapov and Gromkiy, two base minesweepers, a submarine Ust- Bolsheretsk, as well as a missile boat and a rescue tug.

From the Chinese People's Liberation Army (PLA) naval forces, the destroyers Kun Ming and Nan Chang, the corvettes Bin Zhou and Liu Zhou, as well as a diesel submarine, an integrated supply ship and a rescue vessel are involved. The day before, a detachment of Chinese ships arrived at the anchorage area in the water area of the Peter the Great Bay.

In addition to the naval component, 12 planes and helicopters of the naval aviation of the Pacific Fleet and the PLA Navy were involved in the Russian-Chinese exercise.

In the course of practical actions, the crews of the ships of the two countries will work out joint tactical maneuvering, mine countermeasures for detachments, conduct artillery fire at sea targets, search for and block a mock enemy submarine in the designated area.

The first Russian-Chinese joint naval drills took place in the Yellow Sea in August 2005. At that time they were part of the Peace Mission 2005 large-scale military exercises, organized under the auspices of the Shanghai Cooperation Organization (SCO). Since 2012, the Joint Sea annual naval exercises have been held beyond the SCO, aimed at strengthening the combat capability of Russia and China to jointly counter threats at sea.

In 2020, Joint Sea exercise was not held due to restrictive measures in force in connection with the pandemic of a new coronavirus infection.

"The Arab Republic of Egypt will hold joint Russian-Egyptian tactical exercise, Defenders of Friendship 2021, involving practical airdropping of personnel and equipment," the ministry said in a statement.