Fair enough.... the improved engine was intended to counter weight increases over time in operation...

Leaving service entry for the engine for a few years will allow more time for testing and further improvements in design and production so it isn't too expensive and it is reliable.
kvs

GarryB wrote:Fair enough.... the improved engine was intended to counter weight increases over time in operation...

Leaving service entry for the engine for a few years will allow more time for testing and further improvements in design and production so it isn't too expensive and it is reliable.

The 5th generation engine is a major jump over the 4th generation one. That is why it is taking so long to develop. It
uses new materials previously only hypothesized. Likely it also is a major revision of all the stages of a jet engine.
Not quite as revolutionary as pulse detonation, but not trivial either.

MOSCOW, May 16 - RIA Novosti. The latest fifth-generation fighter Su-57 fulfills the unmanned mode during the tests, a source in the military-industrial complex told RIA Novosti.
"An unmanned mode is being developed on the basis of the T-50 flying laboratory. The pilot is in the cockpit during the flight, but only controls the performance of all functions," the agency’s interlocutor said. 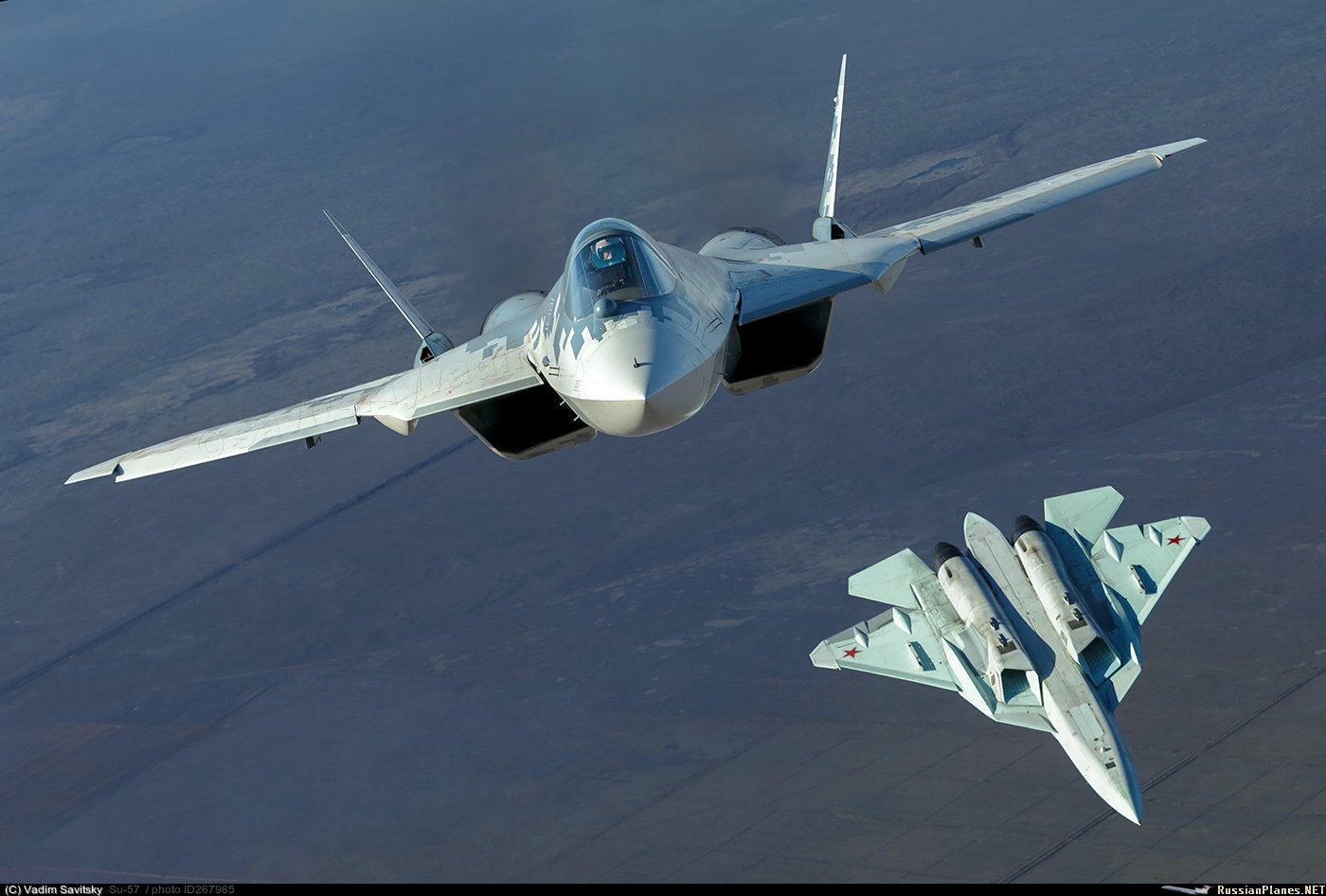 Super-Sukhoi will take off in two years. Tests of the first modernized fifth-generation fighter will begin in the summer of 2022. Officially, the product is called "Su-57 of the second stage." But among the military and aircraft manufacturers, the car received the nickname "Super-Sukhoi." In addition to a completely new engine, the aircraft will be equipped with a package of modern avionics and airborne systems. They plan to complete the development work at the end of 2024, which will enable the transition to the release of an improved modification of the fighter

In the framework of the Megapolis
A large-scale upgrade has already been planned for the Su-57 that has not yet been adopted for service. The Ministry of Defense agreed on the timing and terms of reference for the updated “second stage” fighter, sources in the military-industrial complex told Izvestia. The technical appearance of the modernized machine has already been determined; now the task of the industry is to produce it on time. The aircraft will significantly surpass the current version in combat capabilities, sources added.

The state contract for the development and development work (OKR) of Megapolis to create the Su-57 “second stage” was signed by the Ministry of Defense and PJSC Sukhoi Company on October 29, 2018. According to the statements of the terms of its execution (available to Izvestia), the flight of the prototype is scheduled for mid-2022, and the OCD must be completed at the end of 2024.

At the beginning of June, Sukhoi Company PJSC signed an agreement within the framework of the Megapolis development center to evaluate the effectiveness of the upgraded Su-57s in solving combat missions. As Valery Gerasimov, chief of the General Staff of the Russian Armed Forces previously said, in 2019, fighters of this type were re-tested in Syria and successfully completed all the tasks.

"Product 30"
One of the most important components of the Su-57 Megapolis modernization project will be equipping the fighter with an increased power engine. Now the machines are equipped with a temporary engine of the first stage AL-41F1. The new generation power plant under the designation “product 30” is being developed by the “UEC-Ufa Engine-Building Production Association”.
...

Earlier, representatives of the United Engine Corporation (UEC) said that the new engine has “breakthrough characteristics” and will make the Su-57 an even more advanced project. Among its advantages called increased thrust-to-weight ratio: it will allow to develop supersonic speed without turning on afterburner. Also, the motor will have better operational characteristics, including an increased resource. Plasma ignition system will improve fuel combustion.

As part of the design work, about two dozen prototypes of the “Product 30” were manufactured for ground and air tests. At the beginning of this year, it became known that they were already being tested in a flying laboratory. The first photos of the take-off of the Su-57 with one manufactured experimental engine appeared in March this year. The characteristic toothed shape of the nozzle with a controlled thrust vector noticeable on them should reduce the radar visibility of the fighter.

As Izvestia previously wrote, one of the components of the modernization of the Su-57 will be the replacement of hydraulic actuators of control surfaces with electric motors. This should reduce its visibility for radars, increase maneuverability and increase survivability in the event of damage.

The developer of the original and modernized fighter, the Sukhoi company, also announced the conduct of several more ROCs as part of the creation of the Su-57 “second stage”.

These include the development of a panoramic aviation indicator, new multi-function screens and a wide-angle collimator sight - all this should increase the situational awareness of the pilots.

In addition, the upgraded version will expand the range of guided weapons of the aircraft. According to the military, the Su-57 is a multi-purpose machine, capable of not only fighting for air supremacy, but also delivering accurate attacks on ground and surface targets.

For the aircraft, several families of “smart” missiles and bombs are being developed that can be placed in internal compartments. 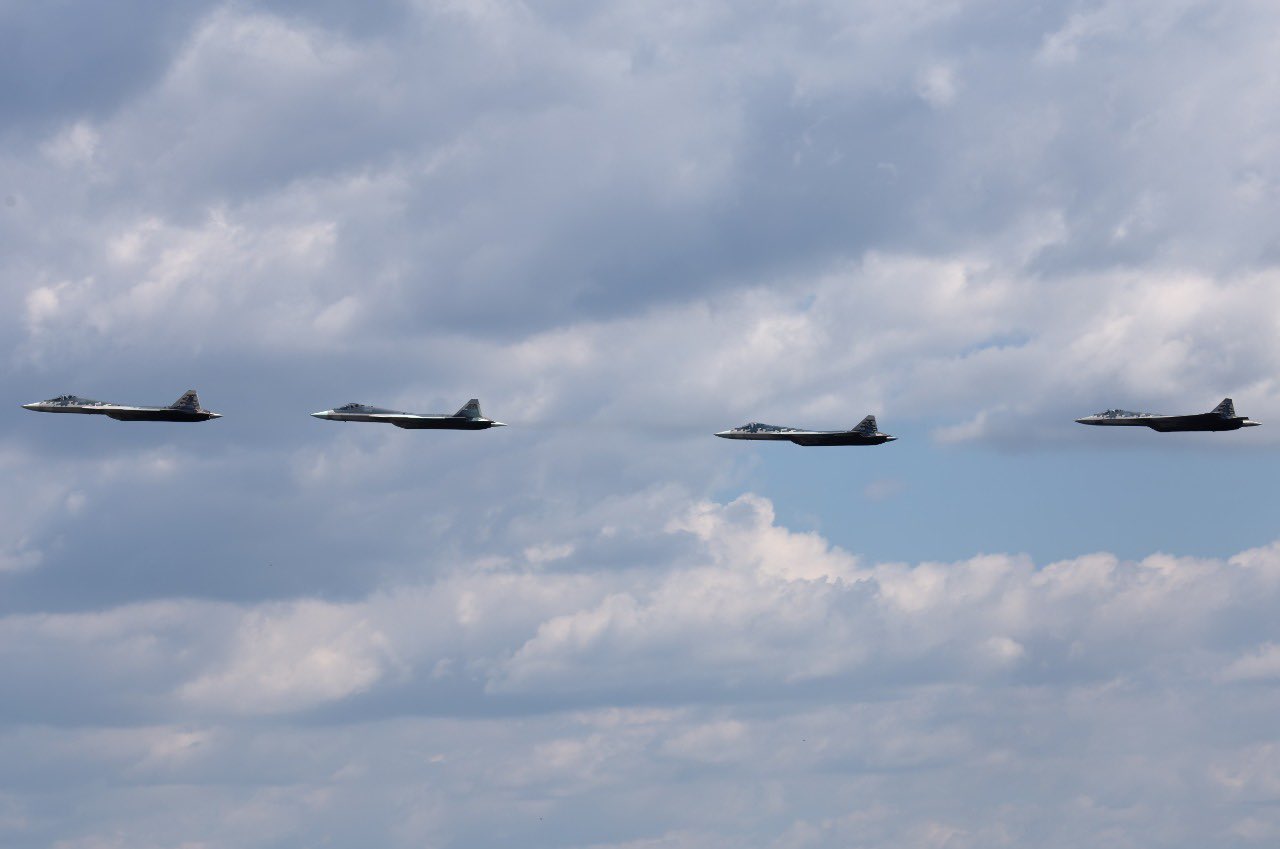 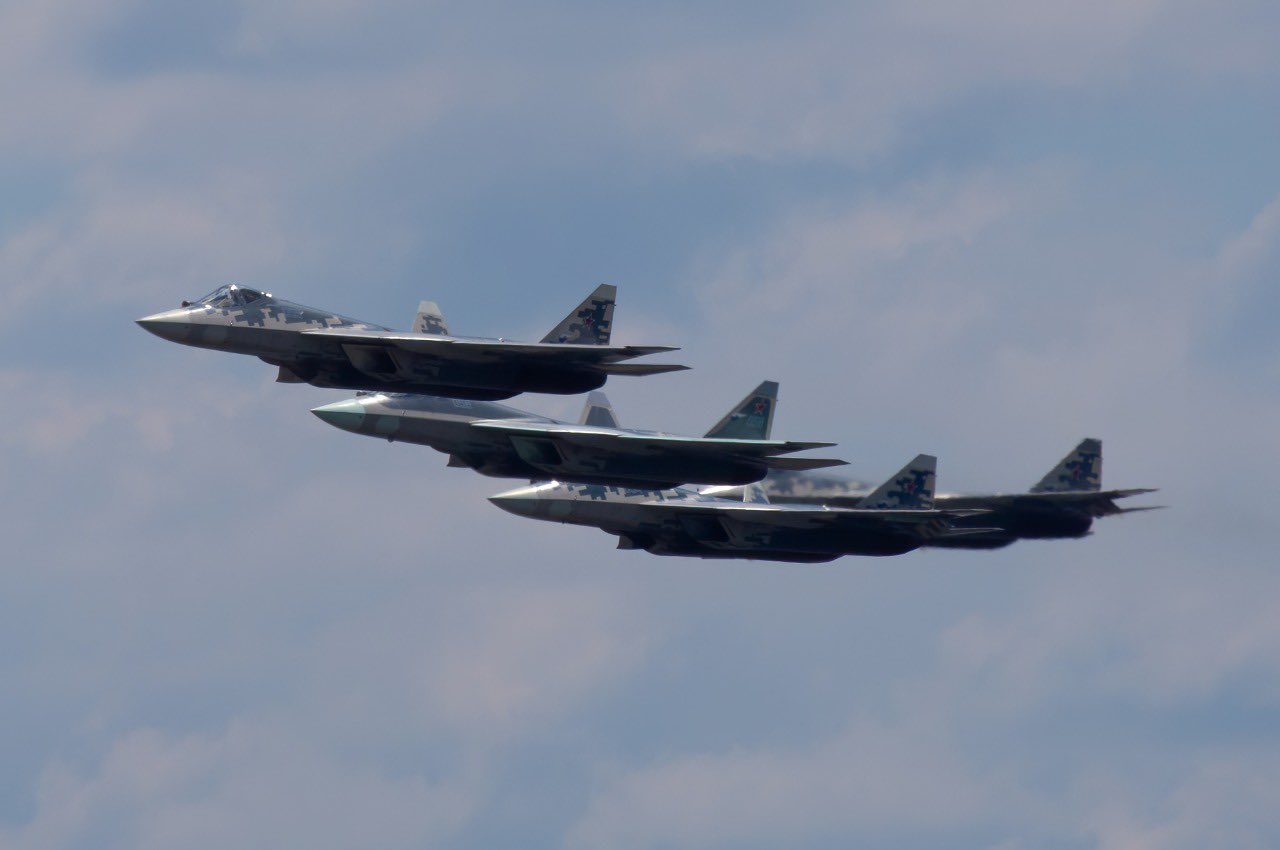 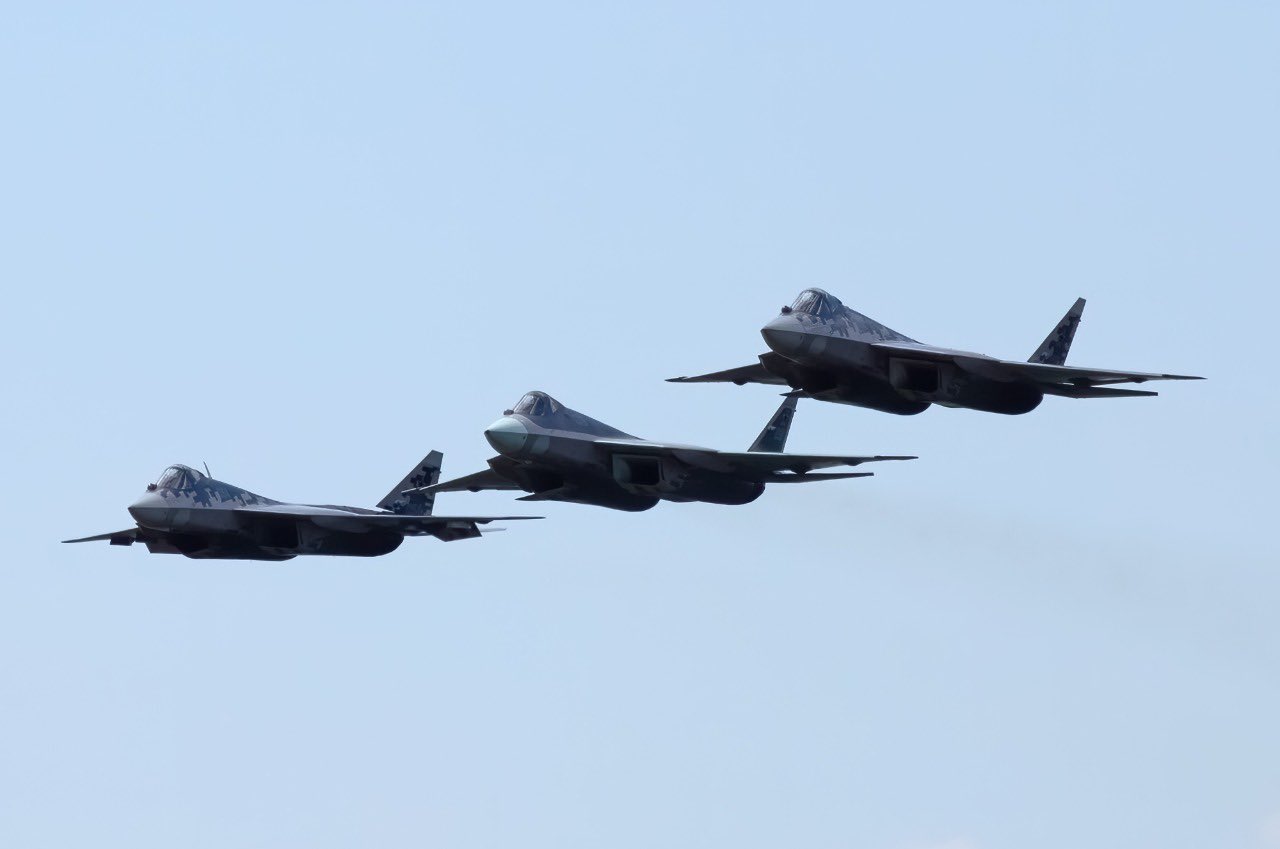 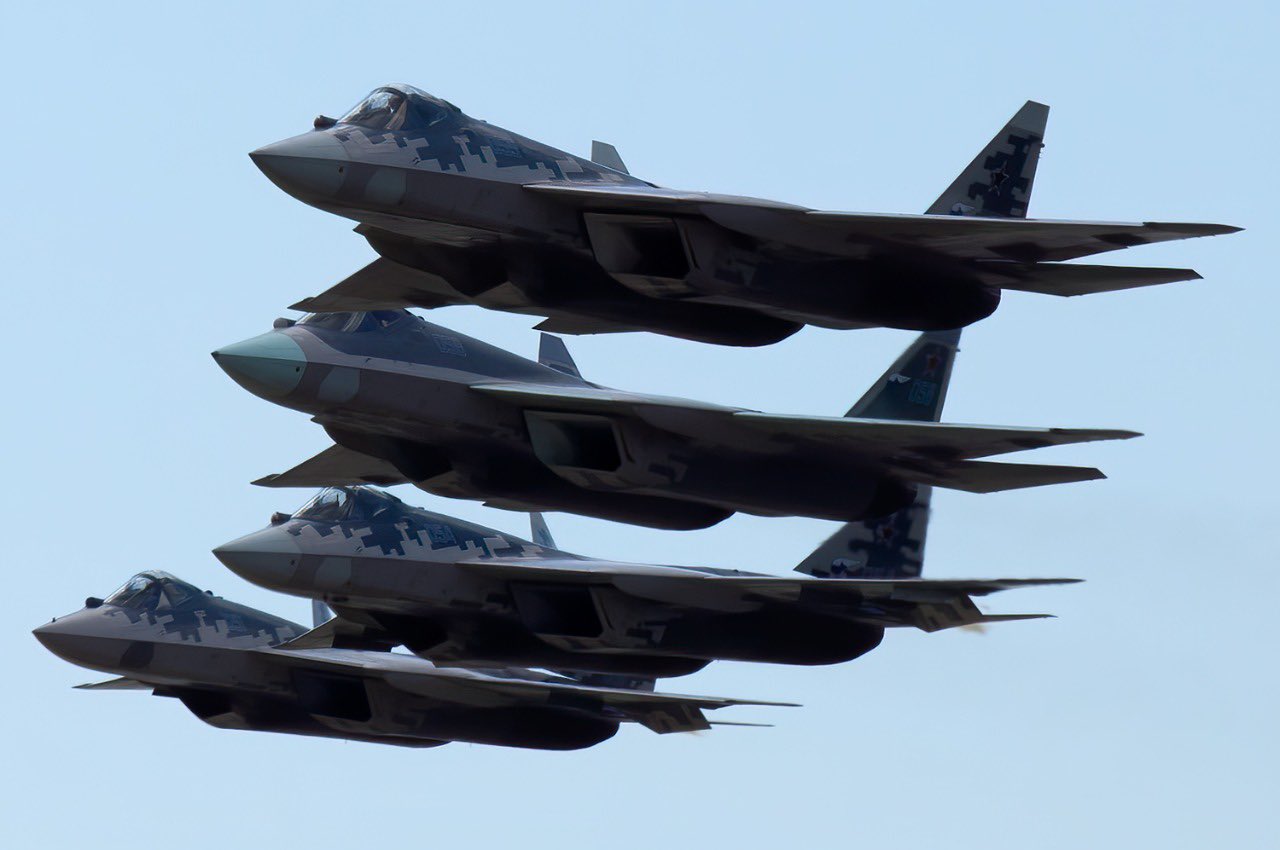 [size=16]Super-Sukhoi will take off in two years. Tests of the first modernized fifth-generation fighter will begin in the summer of 2022. Officially, the product is called "Su-57 of the second stage." But among the military and aircraft manufacturers, the car received the nickname "Super-Sukhoi." In addition to a completely new engine, the aircraft will be equipped with a package of modern avionics and airborne systems. They plan to complete the development work at the end of 2024, which will enable the transition to the release of an improved modification of the fighter

It was stated back in 2019 that they have went from 5 to 6 radars for a 360 degree view and now I am hearing about a package upgrade for avionics. RTI is planning to produce photonic integrated circuits around 2023-2025. It will be another wet dream for me besides the two source announcements of a internal hypersonic missile carry for the Su-57 if they integrate those circuits to the Su-57 included in that Megapolis project.
miketheterrible

So are they gonna still release current 76 ordered units?

Photonics was to be tested and released this year. I know of news where it was tested but that's all. KRET built an entire new plant/facility just for photonic R&D

Aviation Week has a paywall

"The manufacturer incorrectly adjusted the tail plane drive, which overlapped with a failure of one of the flight control system processors."

Russia has conducted an experiment on the use of a "swarm" of Su-35 fighters under the control of a 5th-generation Su-57 aircraft. This was reported to TASS by two sources in the military-industrial complex
GarryB

Damn Ruskies copying us... we invent a bullshit concept that could never work or be implemented by the west because they will just make it too expensive to try, but them damn Ruskies use the idea of one expensive stealth fighter directing relative cheap but very capable fighters... you know... the way they were already doing with Su-30M fighters in the PVO directing radar silent MiG-29s and Su-27s about 25 years ago... and all of a sudden they have copied us...

It is pretty clear that producing Su-57s and at the same time producing Su-30s and Su-35s and MiG-35s and now moving forward with a light stealth fighter suggests they fully intend to use both types together to compliment each other rather than for one to replace the other.

They don't have enough Su-35s to constitute a swarm that is just silly.
thegopnik

I made an answer post dedicated to the F-35 and the 1st and 2nd versions of the Su-57s. PS: I already know the Su-57 dominates but I was just being humble for the majority of viewers.

I made an answer post dedicated to the F-35 and the 1st and 2nd versions of the Su-57s. PS: I already know the Su-57 dominates but I was just being humble for the majority of viewers.

I think it's good, but you start bad

when it gets to the SU-57 part, the first thing it appears to say is that SU-57 is an modernized SU-27... the article you quoted is talking about SU-35, and SU-57, it may confuse some people.
And the Kh-59Mk2 and the Kh-58USHK it's 4 per plane, maybe you could make more clear that some of the weapons you mentioned are export ones.
It's not easy to write an article, you made it fair.

P.S. The SU-57 has more combat range and can carry a bigger payload.

And what about the project of the second stage engine for the Su-57 fighter?

- The process is on schedule, now the engine is undergoing flight and bench tests. This power plant is designed taking into account all the accumulated scientific and technical backlog of the corporation. We can say with full confidence that it will become the basis for creating promising engines for military aviation for the next 10-15 years. 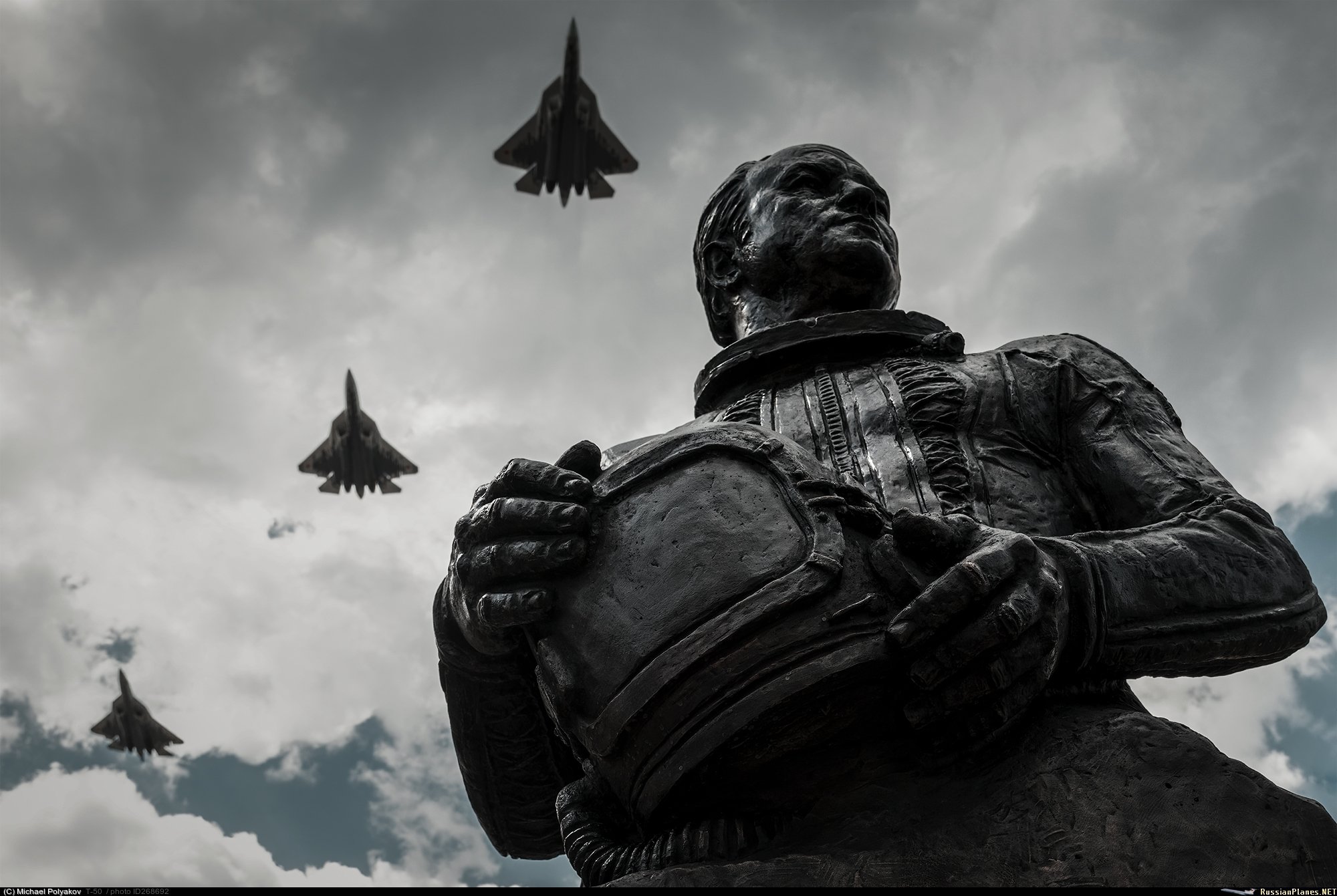 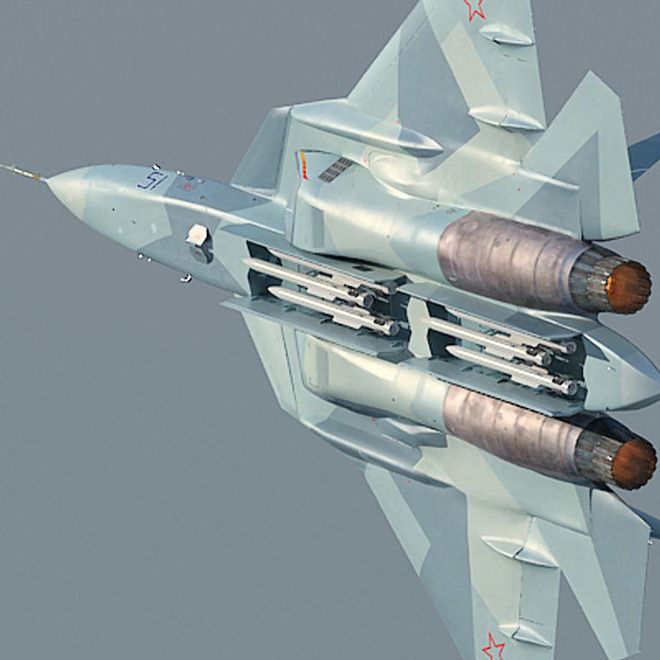 That payload looks worryingly light, how many long range missiles can this thing carry?
GarryB

Note with the rear grid fins folded forward it is actually more compact than with small triangular wings like AMRAAM...
Big_Gazza

Thats an old 'shop, and has been around for years.
ahmedfire

The middle bay seems too wide in those images. I think they would struggle to put more than 2 R-77 missiles in each of those bays, even with folding wings of the new missiles.
GarryB

They fit two R-37Ms side by side or two Kh-58s side by side... which are much bigger and much heavier missiles...
Sponsored content