I am still curious to know what happen to the third frigate that was being built in Yantar, Admiral Kornilov. Will it be towed to india and so one of the 2 completed there, or will it be completed for Russia?

If so with what engine?

Or maybe will it be sold to a third country (e.g. Algeria or Egypt?
Isos

India has its own design of a similiar frigate but mire armed, the Shivalik frigate which uses every thing Grigorovitch uses but with additional israeli radars and barak 1 missiles. And they are buikd in India.

Yet they order more of Russian frigates which suggest that Shivalik sucks and their navy is unhappy with them.
Rodion_Romanovic

Isos wrote:India has its own design of a similiar frigate but mire armed, the Shivalik frigate which uses every thing Grigorovitch uses but with additional israeli radars and barak 1 missiles. And they are buikd in India.

Yet they order more of Russian frigates which suggest that Shivalik sucks and their navy is unhappy with them.

Well, the shivalik are 20 m longer and have a much larger displacement (6200t full load).
From what I understand, the only advantage they have is that they can carry 2 helicopters instead of one.

In addition Barak missiles are short range, so they do not offer much advantage vs Kashtan-M missiles that are present in several short range Russian missile/gun systems...

I am not sure, but maybe the problem is that taiwar and grigorovich have 24 shtil1(naval BUK) vls (2x12) for medium range but relatively poor short range/ point defense with just two AK630 CIWS and 8 igla or verba manpads.


It would have been much more effective and cheaper to add maybe an additional module for shtil, bringing it to 3x12 vls and adding kashtan missile gun systems (and eventually modernized tor/kinzhal.

Unfortunately (for them) the Indians always think that having a mishmash of different systems from various countries and also integrating expensive israeli and french components into russian systems will improve their performance...
Isos

The "advantage" of Shivalik is that it is build by india so it decrease the cost and israeli equipment being more expensive increase it so it should be on par with Grigorovitch.
George1

LUCKNOW /India/, February 5. /TASS/. The Russian-Indian joint venture for the production of Kalashnikov assault rifles is ready to start manufacturing them, a commercial proposal for the Indian Defense Ministry is being prepared, Deputy Director of Russia’s Federal Service for Military-Technical Cooperation Vladimir Drozhzhov told reporters on Wednesday at the DefExpo 2020 international defense exhibition in Lucknow, India.

"The joint venture is currently preparing a technical and commercial proposal for the Indian Defense Ministry. The Russian side is ready to start manufacturing assault rifles as early as this year," he said.

The joint ventures for the production of AK-203 Kalashnikov assault rifles (the localization of production will reach 100%) and Kamov Ka-226T helicopters were earlier registered in India with the assistance of Russia’s Federal Service for Military-Technical Cooperation and the Rostec corporation.

Borisov is 100% correct here. he has probably see the UAV fighters on the drawing board that no manned fighter will be able to defeat. Once these are out, the jig is up for manned fighters. Thousands of F-35 will be instantly obsolete. Can an AAM shoot down a UAV that is just as fast and can also do 20G's? not easy.....

In July, Deputy Prime Minister Yuri Borisov said that Russia sees no sense "to speed up the work for the mass production of fifth generation aircraft".

Russia has the best 4. gen fighters, the best air defence system in the world and is working on world class combat drones. There are also R&D works on 6. gen fighters. The manned 5. gen fighter will just be produced to keep the industry busy and fill the gap until the drones and 6. gen fighters are ready.

Terrible decision. Kremlin should not allow India to use Russian military bases. India has ulterior motives.

India will get involved in a conflict with either China and Pakistan and use Russian bases to attack these two countries thereby drawing Russia into that conflict.

Russia and India will develop an AWACS killer Brahmos

I would expect passive and active radar as well as IIR, because most large radar antenna as used in AWACS platforms generate a very large amount of heat that remains after the radar itself is turned off.

The amount of fuel this missile could carry and the altitude it would need to fly at should make enormous ranges possible...

Even a solid rocket boosted ground launched version would be very interesting for some poorer countries who might find HATO threatening them...
Sujoy

GarryB wrote:I would expect passive and active radar as well as IIR, because most large radar antenna as used in AWACS platforms generate a very large amount of heat that remains after the radar itself is turned off.

The amount of fuel this missile could carry and the altitude it would need to fly at should make enormous ranges possible...

Even a solid rocket boosted ground launched version would be very interesting for some poorer countries who might find HATO threatening them...

India and certainly Russia already has long range air to air missiles with which they can target enemy AWACs.
Tsavo Lion

As reported on November 26, 2020, Russian Helicopters JSC (part of the Rostec State Corporation), the Ulan-Ude Aviation Plant JSC, which is part of it, has completed the preparation of the fuselage assembly line for the Ka-226T light helicopter. The line has produced two fuselages, which will be transferred to JSC "Technodinamika" at the end of November for testing an accident-resistant fuel system. Fuselage of one of two prototypes of Ka-226T helicopters for India manufactured at Ulan-Ude Aviation Plant JSC. Ulan-Ude, November 2020 (c) Russian Helicopters JSC

During the visit to Ulan-Ude Aviation Plant, the Minister of Industry and Trade of the Russian Federation Denis Manturov got acquainted with the assembly line of the Ka-226T helicopter. Until the end of 2020, U-UAZ will assemble a number of stands and assemblies of the Ka-226T helicopter for static, dynamic and life tests. In particular, the production of a test bench for bird resistance and a test bench for windshield cleaning systems is currently being completed.

"Now we are focused on the manufacture of fuselages and machine units for various tests, but at the same time we are working on the creation of prototypes of the Ka-226T helicopter, which we expect to fly into the air in the first half of 2021," explained U-UAZ managing director Leonid White.

To date, the enterprise has already produced thousands of items of equipment: from small templates to large-sized assembly slipways. In September, a slipway for the general fuselage assembly of the Ka-226T helicopter was manufactured and installed, into which already manufactured units are laid: the cockpit bottom, middle and central fuselage compartments, tail booms and tail assembly.

A complete set of design documentation (CD), taking into account all the requirements of a potential customer (Ministry of Defense of the Republic of India) is currently being transferred to the plant, this process will be completed by the end of the year.

The Ka-226T light multi-purpose helicopter with a twin-rotor coaxial carrier system has a maximum take-off weight of 3.6 tons and is capable of carrying up to 1 ton of payload. The Ka-226T became the first machine in the domestic helicopter industry, the development of which was carried out entirely in virtual space without the use of paper media. This makes it possible to significantly reduce risks and costs, both for the development of the helicopter itself and for making changes during the subsequent modernization of the machine.

How reminiscent of the news agency "Interfax", the intergovernmental agreement between Russia and India on cooperation in the helicopter industry was signed in 2015. However, the contract for 200 Ka-226T helicopters with a total value of $ 1 billion has not yet been concluded.

In February 2019, Deputy Prime Minister Yuri Borisov announced that the start of production of the Ka-226T jointly with India is scheduled for 2021.

According to the agreement signed in 2015, the Russian Helicopters holding organizes deliveries to India and the localization of production in this country of the Russian Ka-226T helicopter and its modifications in the amount of 200 units, of which at least 140 machines will be produced at the facilities of the joint venture in India. The agreement also provides for the maintenance, operation, repair of helicopters and the provision of their technical support.

It is planned that the production of the Ka-226T for the Indian customer at the first stage will be carried out in Ulan-Ude, and then gradually transferred to the site of the Russian-Indian joint venture Indo-Russian Helicopters Limited in India. Currently, the Ka-226T is produced at the Kumertau Aviation Enterprise (KumAPP) in Bashkiria. 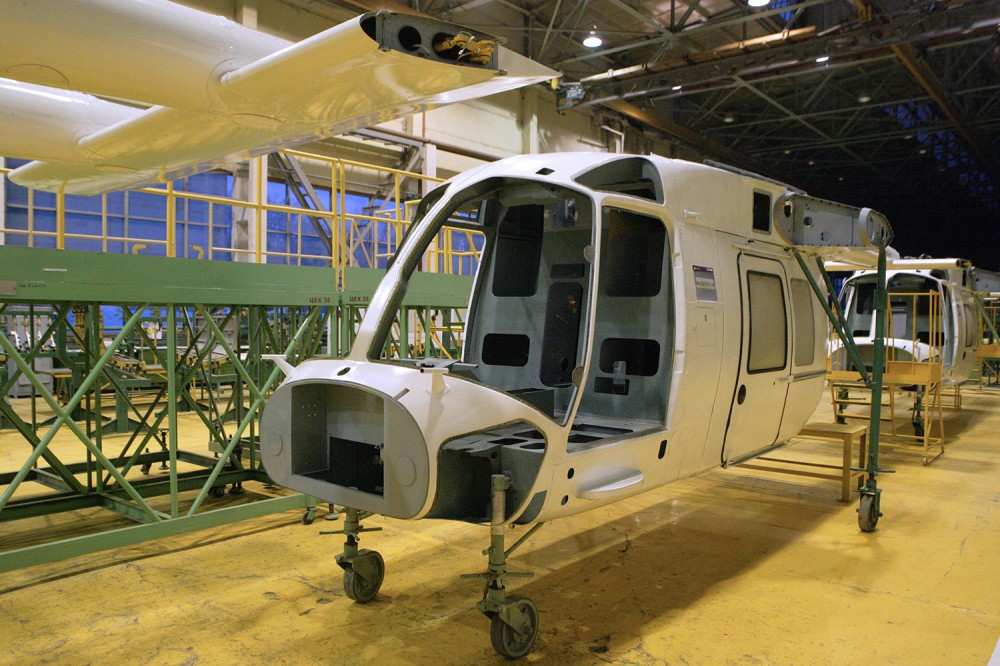 India and certainly Russia already has long range air to air missiles with which they can target enemy AWACs.

They already have weapons like the R-37M with a range of 3-400km, but with a huge ramjet powered missile based on an anti ship missile like Brahmos/Yakhont, they don't need such a big warhead and it can fly very high all the way... in fact its advantage could be flying too high to be intercepted as it flys towards the AWACS aircraft.

Something that could be launched from a large aircraft or even from a ground mount like Bastion which is a Onyx launcher already in use to launch anti ship missiles could be used to launch an anti AWACS version.

When the west invades a country their AWACS platforms are at the core of that invasion system... it monitors the airspace and commands the fighters to intercept any enemy air threats... it can even monitor enemy movements of armour on the battlefield.

The air war over Kosovo was managed via AWACS aircraft... having a truck in Serbia with a couple of large heavy anti ship missiles in the back would not make a lot of sense because of the distance to the ocean and problems finding a suitable target to engage, but even a basic direction finder could detect the enormous radar emissions from a western AWACS platform... having a couple around the place and you could easily triangulate the location of the currently operating AWACS aircraft.... a missile able to fly 1,000km or more at say 30-35km altitude and then dive down almost vertically on an AWACS type aircraft would be of enormous value to most third world countries facing western aggression... you could design it to be totally passive, and launched from 1,000km away it wont spot it immediately...


Being rather high flying it might not notice it at all but if it does it wont detect it till it is about 200km away... and if it is flying at mach 4-5 as it should be able to with a ramjet engine then we are talking about about 5,500km/h for mach 5, which is about 92km per minute... so detection at 200km range will give the AWACS about 2 minutes to shut down its radar and leave the area. At about 850km/h means it covers about 15kms per minute so it can move about 30km in the time from when it shut down its radar and when the missile arrives and starts active radar scanning for the AWACS aircraft... of course with IIR sensors it should find it fairly easily as radars that size generate a lot of heat.

The active radar homing head of the R-37M can detect targets at 50km, while a missile the size of an Onyx should be much larger.

Improvements in radar performance can also dramatically improve over the next few years...