sheytanelkebir wrote:well the US lost over 60-70 tanks in Iraq between 2003-2008. losing tanks is not "impossible" except in the imagination of some fanboys. daesh is a very ruthless and efficient army. no doubt. its only overwhelming iraqi (with allied) power that is breaking their back.

Meanwhile total shitfest on Tweeter and internet between Turks and Kurds. Looks so pretty. I can't fathom what it would be with both sides having regular armies.
Erk

There goes another tank.

That's what happens when you supply TOW
zarib

That's what happens when you supply TOW

The ICTF in the village of Khaznah. 5 Km east of Mosul. According to latest reports (Shafaaq news), the ICTF are now just 2 Km east of Mosul, and have halted their advance to give time for other forces to advance closer to Mosul from other fronts. 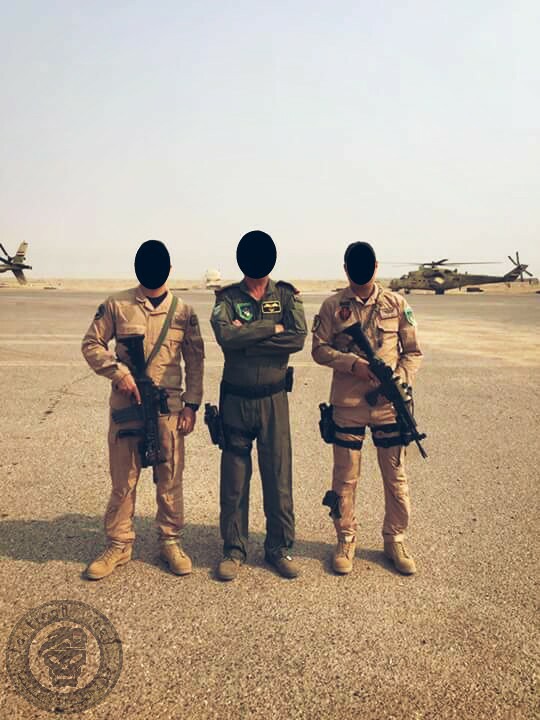 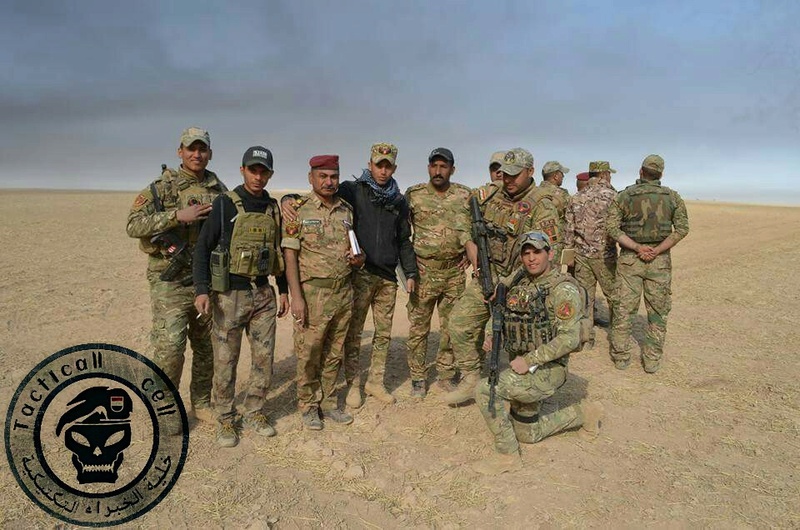 So U.S. smart bombs do have a taste of peeping schoolgirls ?

A US warplane hit a girls' school in the south of the Iraqi city of Mosul on October 21, the Russian General Staff's chief said Tuesday.
GunshipDemocracy

higurashihougi wrote:So U.S. smart bombs do have a taste of peeping schoolgirls ?

A US warplane hit a girls' school in the south of the Iraqi city of Mosul on October 21, the Russian General Staff's chief said Tuesday.

yet another mistake? no war crimes of course? where are those British & Froggy a$$ho£€$ shouting about war crimes?

Amnesty: the US killed in Iraq and Syria 300 civilians


"During the eleven attacks carried out by coalition forces led by the United States over the past two years against DAISH (the Arabic name banned in Russia ISIL) killed at least 300 civilians",- stated in the discussion paper, Amnesty International. NGOs called on Washington for greater transparency of its actions in Syria and Iraq, according to romandie.com.
In late September, the organization sent the U.S. Department of defense Memorandum, which raised various questions. In particular, it was requested to explain the essence of operations by the coalition forces led by the U.S. Central command (CENTCOM). The response from the Pentagon has still not received.
shooting at residential areas and schools
In the Memorandum collected and analyzed information from various sources, including contained the testimony of eyewitnesses who believe that CENTCOM "can't take all the necessary measures to protect civilians".

"The us military carried out illegal attacks, which led to the deaths and injuries of civilians", - such conclusion contains in the report of Amnesty International.

"It is time that the American authorities recognized the extent of the damage caused by a coalition of civilians in Syria. Remember that CENTCOM has recognized so far only one death associated with the attacks carried out by them", - noted human rights activists.

According to Amnesty International, "to shed light on the actions of the coalition are required in the light of new air strikes, which likely will increase in the liberation of Mosul and which affected the civilian population."

That's what happens when you supply TOW

That's the same one posted earlier

It's sarcasm, the losses of tanks are in the low Dozen.
Guest

Depends what we count, if we count those captured, damaged but still thrown out of combat, destroyed... loses kinda do pile up since 2014.
KoTeMoRe

Depends what we count, if we count those captured, damaged but still thrown out of combat, destroyed... loses kinda do pile up since 2014.

Tanks on cam are really about 20-24. This is because the Iraqis were left with light infantry vehicles and a really small pool of tanks about a tenth of the initial force they had (200-220 "tanks") then they were supplemented by second hand M1A1's and T-72 from Bulgaria and Hungary. Czechs sent some as well.

Now if you start counting other AFV's, for sure then it mounts, MRAPS and M1114/51 alone make for huge loss. But Tanks, there aren't enough to lose 200.
sheytanelkebir

Depends what we count, if we count those captured, damaged but still thrown out of combat, destroyed... loses kinda do pile up since 2014.

actually they don't. so although isis have taken pics of themselves with 8 different abrams tanks since 2004 (from different angles), most were recovered. lots of tanks have been hit... some dozens of times. but the number of total losses are actually very small, purely because (as kotemore said) iraq simply doesn't have many tanks.

they requested replacement tanks from the US for the lost ones. The request was for 6 tanks.
sheytanelkebir

near mosul the ISOF destroyed a daesh stronghold and found a T-55 tank which is ex-syrian.
sheytanelkebir

a second syrian origin T55 was captured from daesh.

and today one of the 6 M-198s that daesh captured from the iraqi army in 2014 in mosul was captured too.

of the 6 guns they captured its known that 2 have been destroyed in air strikes... and with the one recaptured today that means that there
are potentially 3 M-198 guns still in daesh hands somewhere.
sheytanelkebir

iraqi air force now deploying to qayara air base after it was refurbished in record time. 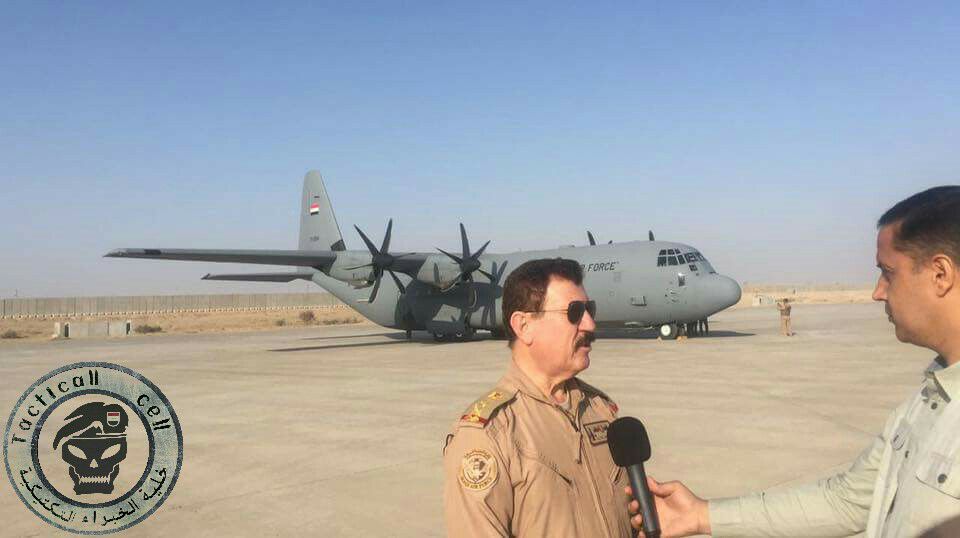 iraqi PMU has started the move towards tel afar. a daesh stronghold city near the syrian border.

the aim is to cut off daesh from escaping to syria.

also iraqi military council for the first time categorically stated that they will pursue daesh into syria.

As per the previous post, this is the state of the area of the strike north to cut the roads to Syria before chasing ISIS in Syria. This is something the US really does not want, Iraqi forces operating on behalf of the Syrian Government on the east bank of the Euphrates. They destroyed the bridges to stop the Syrians, now this.

However when dealing with the Coalition, once bitten, twice shy. "avoid friendly fire"

Telafar will be taken by PMU and OM Abadi didn't ask for US Air support on the western front to avoid friendly fire. @Tez1862 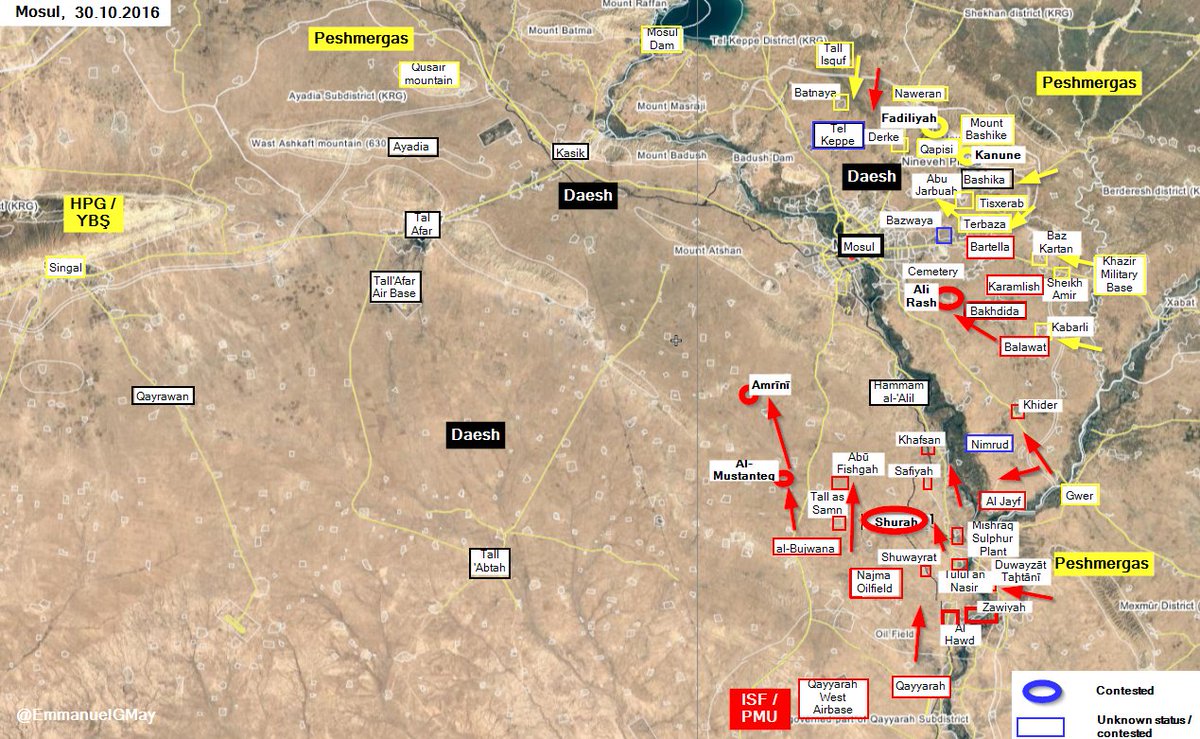 also iraqi military council for the first time categorically stated that they will pursue daesh into syria.

Glad to see they are not treating that dirt like it is out of sight out of mind... that it is not a problem when it is under the rug...

Best of luck to the Iraqi forces and I hope they use all the gear they have to exterminate the scum effectively... even the American stuff.

#ISF liberate more villages in SW,SE & NE of #Mosul from #IS

Iraq shia millitia under command of Iranian general is now the one who is leading the fight against ISIS. Coalition has backed down. They have been left with only corporate media to spread the lies.
par far

Viktor wrote:Iraq shia millitia under command of Iranian general is now the one who is leading the fight against ISIS. Coalition has backed down. They have been left with only corporate media to spread the lies.

Viktor wrote:Iraq shia millitia under command of Iranian general is now the one who is leading the fight against ISIS. Coalition has backed down. They have been left with only corporate media to spread the lies.

He's making things up. First, the PMUs are not under the command of an Iranian general.


Second, the operation is still progressing with same original plan. Over the past two days, the PMUs started to push towards Tal Afar, west of Mosul, which was the plan set by the Joint Iraqi Forces Command since the beginning.

the ICTF are still pushing towards Mosul from the east, and they are by far the closest force to central Mosul. In fact, reports say that they have begun fighting in Gogjali, which is the village that is bordering Mosul form the east.
zarib

By Stephen Kalin and Maher Chmaytelli

EAST OF MOSUL/BAGHDAD, Iraq (Reuters) - Advancing Iraq troops broke through Islamic State defense lines in an eastern suburb of Mosul on Monday, taking the battle for the insurgent stronghold to inside the city limits for the first time, a force commander said.

They made the gain as the offensive to recapture Mosul -- the largest military operation in Iraq since the U.S.-led invasion that toppled Saddam Hussein in 2003 -- entered its third week.

Commanders had warned earlier that the battle for the city, the hardline militants' de facto capital in Iraq, could take weeks and possibly months.

Troops of the Iraqi army's Counter-Terrorism Service (CTS) moved forward on Gogjali, an industrial zone on the eastern outskirts, on Monday after two weeks of fighting to clear surrounding areas of the insurgents.

They then reached Karama district, their first advance into the city itself, an officer said.

"They have entered Mosul," he said. "They are fighting now in Hay (district) al-Karama."

A Reuters correspondent in the village of Bazwaia saw plumes of smoke rising from a built-up area a few kilometers away which a commander said was the result of the clashes in Karama.

The fighting ahead is likely to be more difficult as civilians still live there, unlike most villages taken so far by the Iraqi forces which were emptied of their Christian population.

Islamic State singled out religious minorities in northern Iraq, including Christians and Yazidis, for killing and eviction after leader Abu Bakr al-Baghdadi declared a caliphate in 2014 over territory they captured there and in neighboring Syria.

Their seizure of Mosul and surrounding towns effectively drove Christians from the area for the first time in two millennia.

The recapture of Mosul would mark the militants' effective defeat in the Iraqi half of the territory they had seized.

It is still home to 1.5 million residents, making it four of five times bigger than any other city they controlled in both Iraq and Syria.

"The battle of Mosul will not be a picnic," Hadi al-Amiri, leader of the Badr Organisation, the largest Shi'ite militia fighting with Iraqi government forces, said from the southern frontline. "We are prepared for the battle of Mosul even if it lasts for months."

Other military statements said five villages were taken north of Mosul, where Kurdish Peshmerga fighters are also deployed, while army units advanced in the south.

the offensive against the hardline Sunni group on Oct. 17, with air and ground support from a U.S.-led coalition.

Islamic State militants has been fighting off the offensive with suicide car bombs, snipers and mortar fire.

They have also set oil wells on fire to cover their movements and displaced thousands of civilians from villages toward Mosul, using them as "human shields", U.N. officials and

"Scorched earth tactics employed by retreating ISIL members are having an immediate health impact on civilians, and risk long-term environmental and health consequences," the U.N.'s Office for the Coordination of Humanitarian Affairs said.

U.N. forecasts see up to 1 million people being uprooted by the fighting, which U.N. aid agencies said had so far forced about 17,500 people to flee -- a figure that excludes those taken into Mosul by the retreating militants.

Islamic State said it killed 35 Shi'ite militia fighters and pro-government Sunni fighters in a suicide attack near Haditha, in the western Anbar province, a hotbed of the Sunni insurgency against U.S. forces and the Shi'ite-led government that took over after the overthrow of Saddam. Iraqi officials did not confirm the attack.

The flying of Shi'ite flags by the militias and also some regular army and police units in the mostly Sunni region around Mosul has been a cause of concern for local officials.

But the Hashid Shaabi, or Popular Mobilization forces, as the militias are collectively known, have not been linked to any sectarian incidents so far.

Not the best article, since western media is almost as sectarian as ISIS themselves, but I have to use English language articles here.
Sponsored content