The new supersonic cruise missile looks exactly like the Yakhont/Brahmos missile. What this also means is that the advantage Russia had with those missiles are also reducing, as this same might be available with the US.

Either Russia sold this tech to South Korea like the way the 9M96E formed the base of their KR-SAM.
OR,
the design leaked out of India to the the US/Israel and popped up in S.K.
If its out of leakage from India, its hardly no surprise, coz those who have worked in the HAL or in the know will tell tales of how carelessly the design/diagrams were handled and probably in the open at HAL systems.

And remember, there are no shortage of US/western fanboys/stooges in India.

INS Chakra, Pr.971, was also likely compromised by giving access/entry to muricans to the submarine, inaddition to logging firsthand and detailed database to the P-8I, which will now be part of the US & NATO  P-3/P-8 fleet.
ALAMO

You are talking about the missile program rooting in the Soviet Union directly, and active 20 years ago.
If South Korea - being actually extremely well developed in that, capable to present 4 totally new projects this month only - can only catch up with 20+y/o Soviet tech with Russian assistance, Murica can eat shit. Canned for 20 years of preservation.
PapaDragon

They have been helping them with missiles for decades

+/- 3 decades.
And - what I find really interesting - this help seems to never end up in US hands.
PapaDragon

May have a lot to do with America's position on Japan and fact that S.Korea and Japan are still not friendly towards each other.

Or the fact that US left "allies" in low intensity conflict get destroyed by poorly armed opponent.

They have nothing to expect from them against China or North korea that armed extremely well.

May have a lot to do with America's position on Japan and fact that S.Korea and Japan are still not friendly towards each other.

It's japabese that invaded south korea in WW2 and did horrible stuff to them.

China did nothing to south korea. They may be afraid by communism expention but chinese people isn't an enemy.

2 years ago there was a big incident at sea where a ROK ships locked on a japanese patrol aircraft with its gun fire control radar. Similar thing never happened with China.

I highly doubt koreans want the same US weapons that japan use. That's why they try to make stuff themselves and work with russians.

Russia should dump those crazy north koreans and push for more cooperation with south korea.
PapaDragon

Isos wrote:...Russia should dump those crazy north koreans and push for more cooperation with south korea.

Pretty much already did

Isos wrote:...Russia should dump those crazy north koreans and push for more cooperation with south korea.

Pretty much already did

Already building a 3 Gigawatt hour factory and already there is talk and plan of expanding it to 12 thanks to Rosatom's daughter corporation Renera buying a 49 percent stake in Enertech, a leading lio battery producer.

The new supersonic cruise missile looks exactly like the Yakhont/Brahmos missile. What this also means is that the advantage Russia had with those missiles are also reducing, as this same might be available with the US.

And - what I find really interesting - this help seems to never end up in US hands.

Russia has been displaying models of the Yakhont at airshows since about the mid 1990s... the fact that other countries have likely copied the shape and then developed a ramjet powered missile based on that shape is no big deal... the Kh-31 and the SA-6 SAM use the same combined rocket ramjet design and travel at similar mach 2-3.5 flight speeds... it was not a super secret... the US Navy bought MA-31 target drones from the Russians for quite some time so it is not like it is alien technology or some Indian needs to take the blame for selling secrets...

Why buy what you can seize...


Russia should dump those crazy north koreans and push for more cooperation with south korea.

More like get those South Koreans to kick those American soldiers out of their country and get the North and South cooperating and working together... without the US there to sabotage it it just might work...

South Korea is an extremely interesting example.
Once occupied by US for decades, it is still independent enough to operate Russian-provided tanks & IFVs for 30 years now. Sure, those used to be provided as debt repayment, but they could reject that.
Their own AD system was made along with Almaz-Antei, that is A-A functionally designed it for them, while they provided a waste amount of electronics and chips for Russian military hardware.
A week or two ago, there was another big Hyundai engines factory opened in Russia.
Shipyard businesses cooperate with Koreans so closely, that they share the safety procedures, and Russian staff can work directly on a slipway of any big Korean yard, with short localization training only. Koreans work in Russia on a daily basis, and reverse.
They cooperate with Russia in so many aspects, that it is hardly imaginable if considered that formally they are US ally/vassal state... 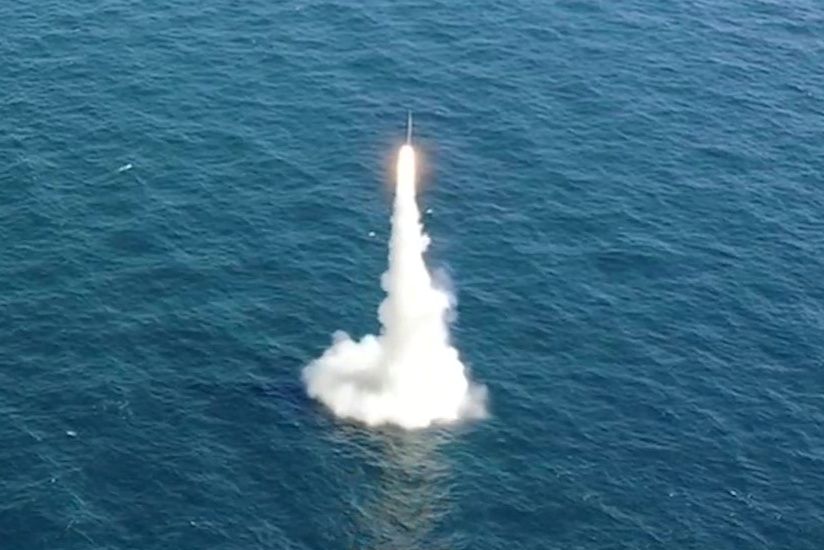 The second successful test launch of the South Korean ballistic missile for submarines (SLBM) of the national design Hyunmoo 4-4 (K-SLBM) from the vertical silo launcher of the head South Korean large non-nuclear submarine of the project KSS-III SS 083 Dosan An Chang-Ho in a submerged position, 09/15/2021 (c) still from the video of the Ministry of National Defense of South Korea


The launch, carried out in early September (no exact date), was reported on September 7 by an "unnamed representative of the South Korean Ministry of National Defense." In contrast, the second launch on September 15 was officially announced immediately and was overseen by South Korean President Moon Jae-in. “The possession of SLBMs is essential for deterring omnidirectional threats and is expected to play a key role in building self-defense and peace capabilities on the Korean Peninsula,” the South Korean President’s office said in a statement after the launch.

The September 15 launch was first shown on an official video from the South Korean Ministry of National Defense, which made it possible to assess the appearance of the Hyunmoo 4-4 missile.

Earlier, at the end of June 2021 was made the first successful launch of a rocket from Hyunmoo 4-4 under water submersible stand-barge.

The South Korean SLBM itself was created on the basis of the family of South Korean ground-based solid-propellant ballistic missiles of operational-tactical and "short" range Hyunmoo 2/4. Recall that the first successful flight test of the most modern ground modification of this Hyunmoo 4 family was carried out in South Korea in April 2020. The Hyunmoo 4 missile officially has a maximum flight range of up to 800 km and a warhead weight of 2000 kg.

The Hyunmoo 2/4 family missiles were developed under the auspices of the Defense Development Agency (ADD) of the South Korean Ministry of National Defense with the participation of broad cooperation of South Korean defense companies led by the Hanwha Corporation, which is their direct serial manufacturer. In a commercial distributed by its Hanwha Systems division in October 2019, a computer-generated plot of a ballistic missile launch from a submarine was shown, in which the missile was similar to the Hyunmoo 2/4, but with a "blunt" nose fairing characteristic of SLBMs ...

It is known that research and development on SLBMs has been conducted in South Korea at least since 2017. It was reported that during 2020, several drop tests of K-SLBM SLBMs were made from a ground stand in a large water tank. In April 2021, the YTN TV channel of the Yonhap agency reported that on January 13 and at the end of March 2021, the first two tests of the K-SLBM were carried out with a launch from under water from a submersible stand, but both of them were unsuccessful (when launched on January 13, the rocket fell through a few seconds after leaving the water). In light of this, it can be assumed that the current successful launch was also carried out from a submersible stand.

rockets 4-4should be equipped with large non-nuclear submarines of the South Korean KSS-III project, equipped with vertical silo launchers with a diameter of 1066 mm to accommodate ballistic or cruise missiles (the largest diameter of the body of the Hyunmoo 2/4 missiles, according to most sources, is 0.9 m). The first three boats of the KSS-III project of the first series (Batch 1) each have six such vertical launchers, and the next three ordered boats of the KSS-III project of the second series (Batch 2) should have 10 vertical launchers each. Parent Project Boat KSS-III first series SS 083 Dosan An Chang-Ho was ENTER NO ene commissioned Navy South Korea August 13, 2021, and now in September with her two missile launches were made Hyunmoo 4-4. ETwo more boats of the first series are under construction and are planned for delivery by the end of 2023. The first submarine of the KSS-III project of the second series SS 087 Lee Bong-chang is supposed to be laid down in 2021 with commissioning in 2026; on September 10, the second submarine of the second series was ordered with a delivery date in 2028.

It should be noted that on September 15, 2021, in addition to the video of the second successful launch of the Hyunmoo 4-4 SLBM from a submarine, the
Ministry of National Defense of South Korea showed a whole series of video images of tests of new
missile weapons, although, apparently, their dating is not exactly tied to September 15 ... Presumably, the next test launch of the Hyunmoo 4 (or Hyunmoo 2C) ballistic missile was shown ,the launch of a new air-launched cruise missile designed to arm the promising South Korean fighter KF-21 Boramae, a test launch of a new supersonic anti-ship missile similar to the Russian Onyx / Yakhont missile, as well as bench tests of a new solid-propellant engine for space launch vehicles ( presumably the latter took place in June 2021). The appearance of the South Korean ballistic missile for submarines (SLBM) of the national development Hyunmoo 4-4 (K-SLBM) based on the video of the test 09/15/2021 (c) Orion_int @Orion__int Video of the launch on September 15 (including launches of other South Korean missiles): 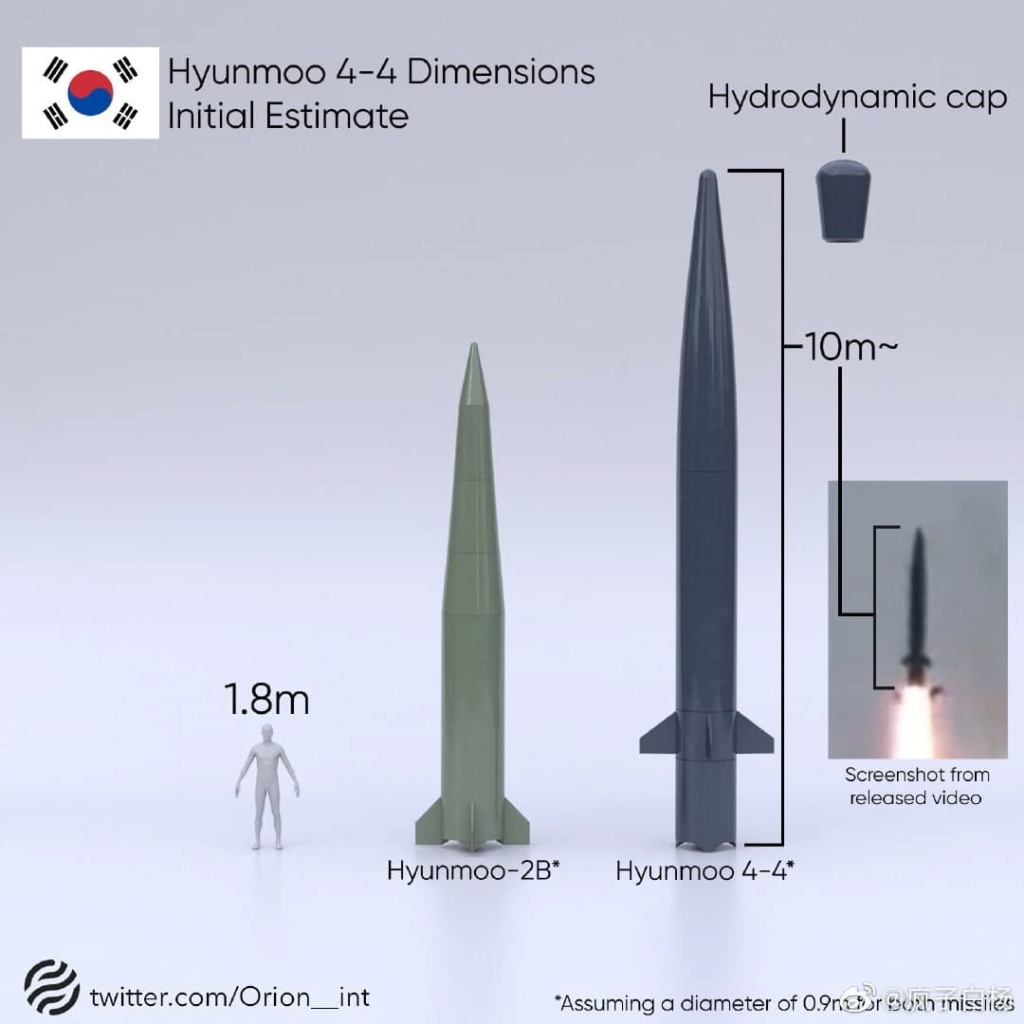 Korea has started development of a scramjet hypersonic missile. It is obvious who will help them. So we have the Korean Iskander, the S 350, and the Onyx. Will there be a Korean Cirkon? 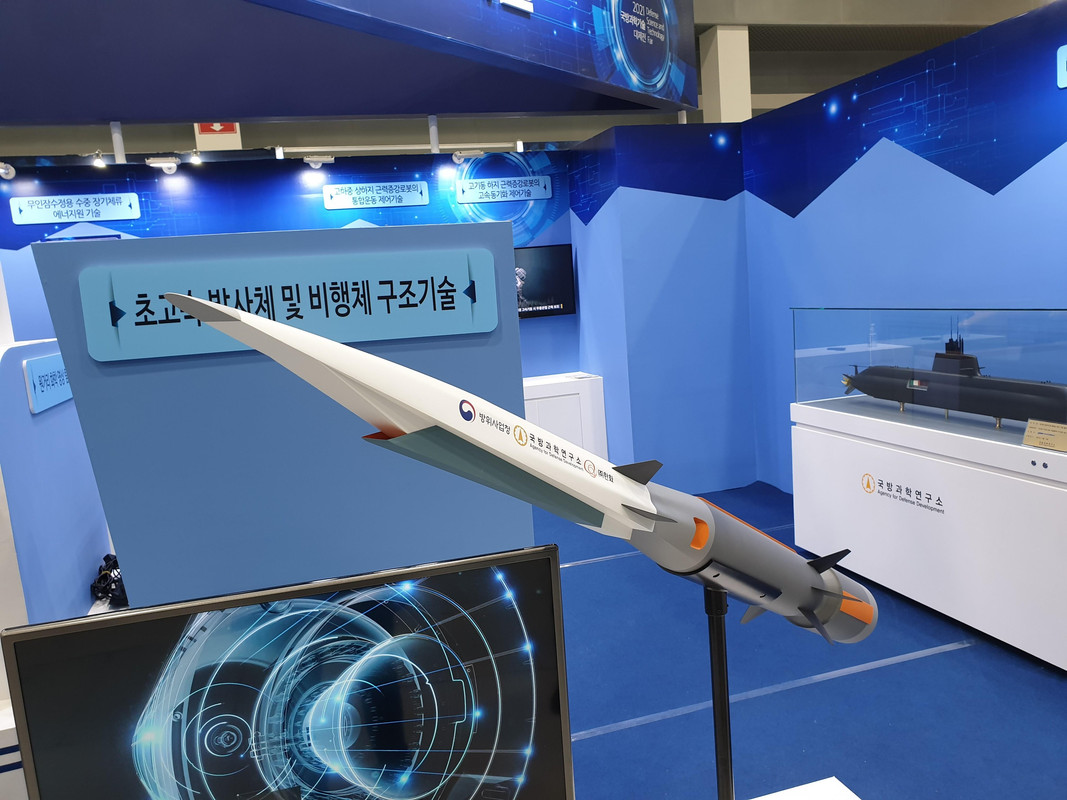