On December 26, 2018, Sikorsky (part of Lockheed Martin Corporation) and Boeing distributed photos of the first prototype prototype of the multi-purpose high-speed helicopter SB> 1 that they jointly create (instead of SB-1) Defiant. The creation of SB> 1 (Sikorsky S-100 brand designation) is carried out as a demonstrator of a promising high-speed helicopter on a competitive basis as part of the program of the United States Army Multi Multi-Role (JMR) Technology Demonstrator (TD) to develop new concept helicopters Aviation Future Vertical Lift (FVL). The first flight SB> 1 was originally scheduled for the end of 2017, but was postponed several times, and as a result is now scheduled for 2019. 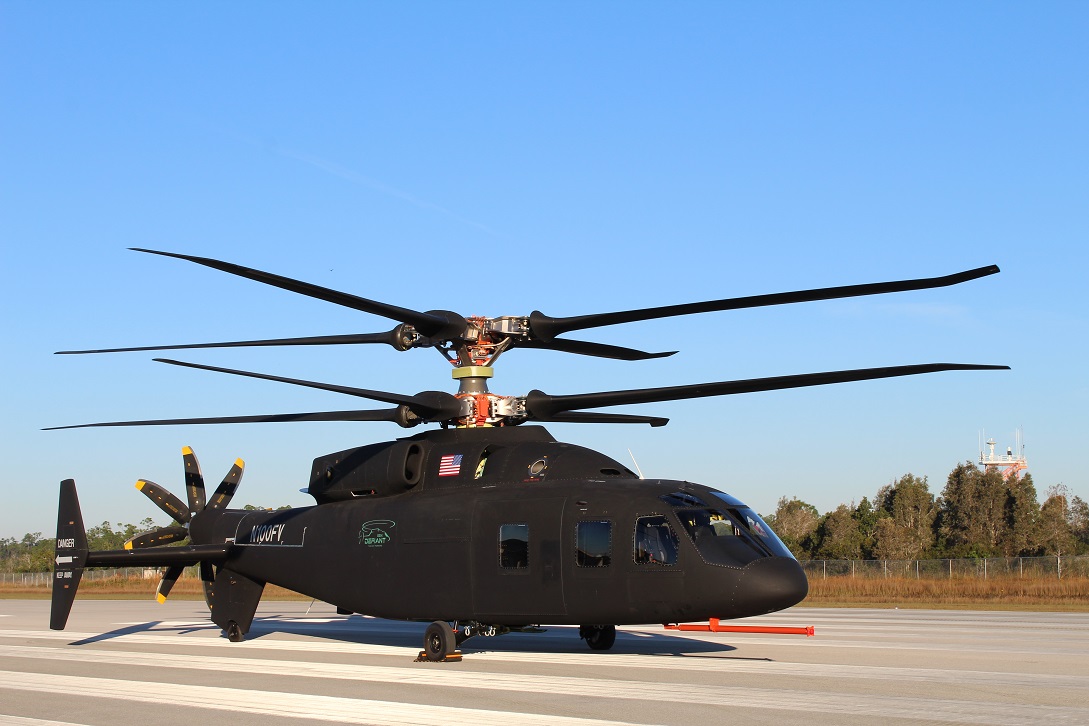 On December 26, 2018, Sikorsky (part of Lockheed Martin Corporation) and Boeing distributed photos of the first prototype prototype of the multi-purpose high-speed helicopter SB> 1 that they jointly create (instead of SB-1) Defiant. The creation of SB> 1 (Sikorsky S-100 brand designation) is carried out as a demonstrator of a promising high-speed helicopter on a competitive basis as part of the program of the United States Army Multi Multi-Role (JMR) Technology Demonstrator (TD) to develop new concept helicopters Aviation Future Vertical Lift (FVL). The first flight SB> 1 was originally scheduled for the end of 2017, but was postponed several times, and as a result is now scheduled for 2019.

SiKamovsky....I thought according to the fanbois that coaxial rotors were dangerous and impractical? Life must suck for them constantly being neck-deep in their own bullshit.

Naw... it is only Russian crap until it is realised to be useful... then we dig up old drawings from projects from the 1950s that prove it was all invented by the US anyway...

According to American media, on March 16, 2020, the U.S. Army chose the two main proposals for aircraft - the SB> 1 Defiant high-speed helicopter of the Sikorsky and Boeing consortium and Bell's V-280 Valor tiltrotor plan - to continue full-scale competitive development of the Future Long- Range Assault Aircraft (FLRAA) to create a promising multi-purpose helicopter.

The choice was made based on the results of preliminary flight tests of prototype demonstrators of both aircraft as part of the Joint Multi-Role (JMR) Technology Demonstrator (TD) project to develop new concept helicopters for creating a family of promising Future Vertical Lift (FVL) army aviation helicopters.

Now, on March 16, companies that submitted both competing offers received U.S. Department of Defense contracts to continue R&D through the Competitors in the demonstration and risk reduction (CD&RR) phase. The Sikorsky consortium (part of Lockheed Martin Corporation) and Boeing received a $ 97 million contract to continue developing and testing the SB> 1 Defiant high-speed helicopter, and Bell (a member of Textron Corporation) received a $ 84 million contract to continue development and testing the tiltrotor V-280 Valor. The CD&RR stage should last two years, and in the fiscal year 2022 the U.S. Army should choose the only model for further full-scale R&D under the FLRAA program with the prospect of starting mass production in the fiscal year 2030 (the period looks clearly overly optimistic).

The requirements under the FLRAA program include the creation of a medium multi-purpose helicopter to replace the main American helicopter of this class Sikorsky UH-60 Black Hawk, and provide for the transportation of 12 fully equipped infantry with a cruising speed of at least 230 knots (about 428 km / h) to a range of at least 229 nautical miles (424 km). The FLRAA helicopter should be equipped with two promising General Electric T901 turboshaft engines, created under the US Army Future Affordable Turbine Engine (FATE) program and having take-off power of more than 5000 hp.

In turn, the FLRAA (category JMR-Medium / FVL-Medium) acts as part of the more extensive FVL program, implemented since 2004 and providing for the creation of five types of new helicopters or aircraft for vertical take-off and landing to replace the entire fleet of U.S. Army aviation helicopters ( OH-58, AH-64, UH-60, CH-47), starting from about 2030-2035. At the same time, both competing groups under the FLRAA program also declare ongoing studies of shock versions of their machines to meet the requirements of the US Army in the Capability Set 3 / FVL-Attack subroutine (to replace the Boeing AH-64 Apache combat helicopter).

In 2013, the U.S. Army selected at the first stage of creating the JMR TD technology demonstrator under the FLRAA program, the V-280 convertible plan projects of Bell, the Sikorsky and Boeing high-speed helicopter SB> 1 Defiant, as well as the projects of the Karem Aircraft convertiplane and the AVX Aircraft high-speed helicopter. The last two initiative projects fell away in August 2014, although AVX announced and continues to state that it continues to develop its aircraft in the FLRAA competition at its own expense. Thus, competition for FLRAA is conducted between the “giants” of the US military-industrial complex, which, under the terms of the contracts provided in 2014, were supposed to provide their first prototype demonstrators by the end of 2017 (only V-280 convertiplane complied with this condition). In both cases, the U.S. Department of Defense funded no more than 20% of the cost of the companies in the first phase of JMR TD.

The first prototype demonstrator of the V-280 Valor convertiplane created by Bell as part of the JMR TD (the so-called Air Vehicle Concept Demonstrator - AVCD, registration number N280BH) made its first flight on December 18, 2017 in Amarillo (Texas), and has now flown more than 160 hours in test flights.

The V-280 was developed by the so-called Team Valor alliance of Bell Helicopter, Lockheed Martin, General Electric, Moog, IAI, TRU Simulation & Training, Astronics, Eaton, GKN Aerospace, Lord, Meggitt and Spirit AeroSystems. The V-280 serial tiltrotor with a crew of four is supposed to carry 14 troops. With a declared maximum take-off weight of about 30 thousand pounds (13620 kg; apparently there will actually be more), the device should have a maximum payload of up to 10 thousand pounds (4540 kg). The machine is almost completely made of composite materials and equipped with two turboshaft engines. The difference between the V-280 and the previous types of convertiplanes (in particular, the V-22 Ospey) is that it does not turn completely nacelles with engines, but only screws, due to the articulated shafts.

The prototype demonstrator V-280 is equipped with engines of the General Electric T64 series, however, production cars should be equipped with promising turboshaft engines General Electric T901 under the FATE program. The cruising speed of the machine should be 280 knots (520 km / h, hence the index "280"), the maximum - more than 300 knots (560 km / h). The ferry range is declared at 3900 km, the range (depending on the load) is from 930 to 1480 km.

In turn, the SB> 1 Defiant high-speed helicopter, presented by the Sikorsky and Boeing consortium, uses Sikorsky’s new rotor design combining counter-rotating coaxial rotors with a tail propeller driven by the rotor gearbox. This scheme was worked out by Sikorsky on an experimental X2 helicopter, which was tested in 2008-2011 and reached a maximum speed of 460 km / h, and on the demonstrator of the 5-ton S-97 Raider helicopter tested since May 2015, with a "passport" maximum speed of 444 km / h and cruising - 407 km / h.

The maximum take-off weight of the first prototype SB> 1 is declared at 32,000 pounds (14515 kg), capacity - up to 18 people. The SB> 1 prototype is equipped with Honeywell T55 modified turboshaft engines with a takeoff power of approximately 4,000 hp. (these engines are used on Boeing CH-47 Chinook helicopters), which will provide a cruising speed of at least 250 knots (460 km / h). However, according to Sikorsky, the range required by FLRAA will be achieved only on SB> 1 in a serial configuration with promising General Electric T901 engines under the FATE program. 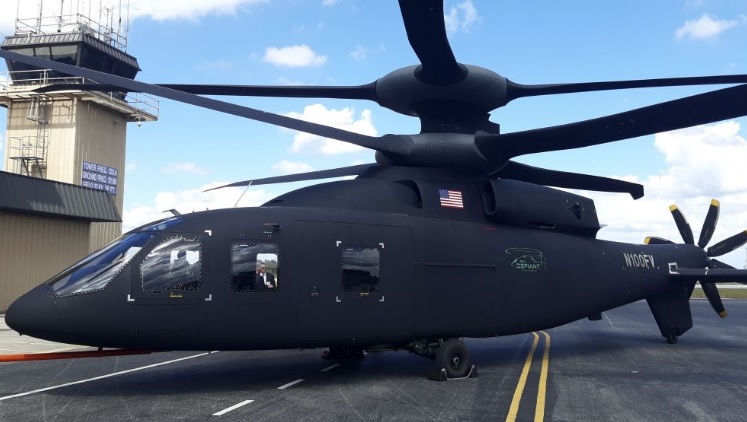 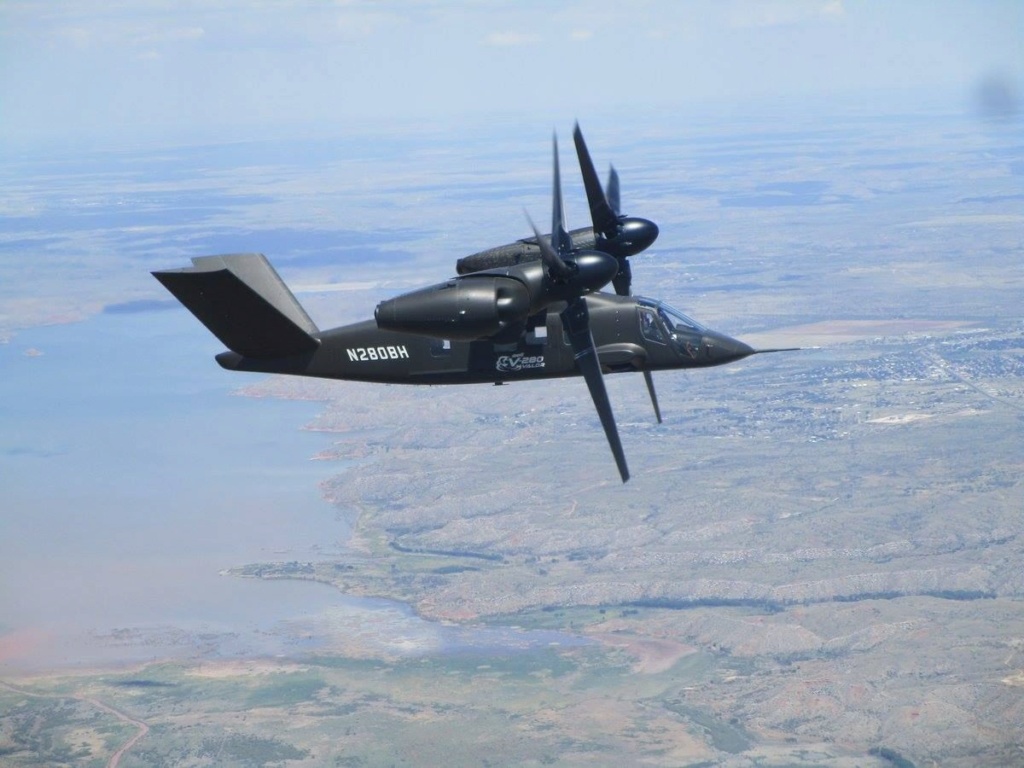 On January 25, 2021, a consortium of American companies Sikorsky (as part of Lockheed Martin) and Boeing officially presented the project of a new high-speed helicopter Defiant-X, proposed for a tender under the Future Long-Range Assault Aircraft (FLRAA) program to create a promising multipurpose helicopter for the US Army for replacement after 2035 of helicopters of the Silorsky UH-60 Black Hawk family. The Defiant-X helicopter is a development of the SB> 1 Defiant high-speed multipurpose helicopter demonstrator , which is undergoing flight tests since March 2019.