MOSCOW, July 12. /TASS/. Russian Helicopters completed the first service contract for the Ministry of Defense of Laos and turned over the lot of four Mi-17 helicopters to the customer, press service of the Russian holding told reporters on Thursday.

A dozen T-72B1s were delivered to Laos

A dozen T-72B1s were delivered to Laos


A widespread shot from a video from a Lao resource, which allegedly demonstrates the first Yak-130 combat training aircraft received by the Lao Air Force. It is reported that this aircraft (tail number "044") was delivered to the capital of Laos, Vientiane on December 20, 2018 from Irkutsk on board the IL-76TD transport aircraft (registration number RA-78765) of the Russian airline Aviakon Tsitotrans. 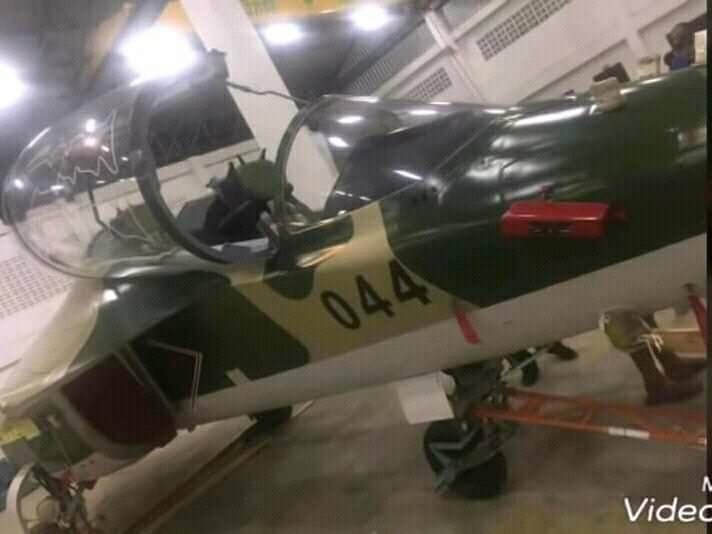 Previously, there was no information on the conclusion by the Russian side of the contract for the supply of Yak-130 aircraft to Laos, although in the beginning of 2016, Russian media spread information about the interest of the Laotian military to the Yak-130, and it was stated that Laos "can get 16-20" of these airplanes. An analysis of the Lao military media shows that since the end of 2017, they have repeatedly published materials on the Yak-130 aircraft.

Thus, if the information on the delivery of the Yak-130 to Laos is correct, this state will become the fifth foreign recipient of the Yak-130 aircraft produced by the Irkutsk Aviation Plant PJSC "Irkut Corporation", after Algeria (received 16 cars), Bangladesh (16), Myanmar (six) and Belarus (eight units).

Within military-technical cooperation, the Ministry of Defence of the Lao People’s Democratic Republic transferred thirty T-34 tanks to the Russian Military Department. Until recently, armored vehicles were in service Laos army.

During the visit of the Minister of Defence of the Russian Federation, General of the Army Sergei Shoigu to Laos, agreements were reached on the return of T-34 tanks to Russia.

Military equipment by sea transport has already overcome more than 4,500 km and arrived in Vladivostok. Further, it will be delivered by rail to Naro-Fominsk. 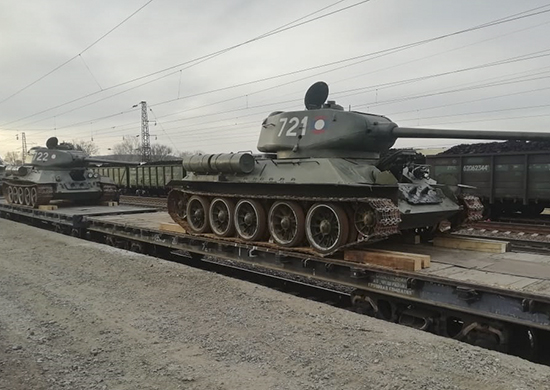 Ten Yak-130 aircraft to be delivered to Laos

According to the newspaper Kommersant in the article by Alexandra Djordjevic "Lao pilots flew in. 10 Yak-130s will enter the country, Russia delivered four training-combat aircraft Yak-130 to Laos. As stated in the Ministry of Defense of the Russian Federation, the equipment has already been fully paid. According to “Kommersant”, this is only the first part of a batch of ten such machines. The total cost of the procurement, as estimated by “Kommersant”, is about $ 300 million. Earlier, Laos handed over to Russia 30 fully operational T-34-85 tanks. Deputy Minister of Defense Alexander Fomin declared “Kommersant” that this is a free transfer of equipment, for which Moscow is extremely grateful to Vientiane.

The fact that Laos purchased four Yak-130 combat training aircraft from Russia was reported to the Russian Ministry of Defense on Tuesday, stressing that the equipment had already been delivered. “Under the contract signed in 2017, four Yak-130 combat training aircraft were delivered to Vientiane on a commercial basis. Aircraft paid in full, "- said the military department. They also noted that armored and lightly armored vehicles, as well as other Russian-made weapons, were simultaneously delivered to Laos. The contract was signed on August 26, 2017 by the head of the Russian government, Dmitry Medvedev, and the Prime Minister of Laos, Thonglun Sisulit, in Gorki, near Moscow. On January 10, 2019, Interfax, citing a source, announced the delivery of several Yak-130 to Laos. Then the FSMTC of Russia did not comment on this information.

According to “Kommersant”, we are talking about the beginning of the implementation of a larger supply. According to the source of “Kommersant”, according to the above contract, ten such machines will be delivered to Laos. The estimated cost for all of the Yak-130 was about $ 300 million. Laos became the fifth foreign recipient of the Yak-130 aircraft produced by the Irkutsk Aviation Plant of PJSC "Irkut Corporation", after Algeria (16 cars), Bangladesh (16 cars), Myanmar (six machines) and Belarus (eight cars).

Yak-130 is designed for training and combat training of pilots, as well as the use of air and ground targets. It allows you to train pilots for combat aircraft of the generations "4+" and "5". For the first time the car took to the air in 1996, and in 2002 was chosen as the main aircraft for the training of pilots of the Russian Air Force.

In early January 2019, the Ministry of Defense of the Russian Federation reported that Laos transferred 30 T-34-85 tanks to Russia in a fully operational condition. Until recently, armored vehicles were in service with the army of Laos. Agreements on the return of T-34-85 tanks to Russia were reached in January 2018 during the visit to Laos of the Minister of Defense of the Russian Federation Sergei Shoigu. The military department stressed that this decision was made by Laos "in recognition of the many years of military and military cooperation, which greatly helped to protect the sovereignty and strengthen the defense capabilities of the Lao PDR), and also understood the historical significance for our country of everything connected with the victory in the Great Patriotic War. The echelon with tanks is now following Siberia (on Tuesday it was in Krasnoyarsk, and on Wednesday should arrive in Novosibirsk) and is heading for Naro-Fominsk. “We are grateful to Laotian friends for this gratuitous, symbolic and sincere gesture,” said Deputy Minister of Defense Alexander Fomin, “Kommersant”.

January 20 marks the 70th anniversary of the founding of the Lao People’s Army. According to the Russian defense ministry, a representative Russian military delegation will take part in the celebrations in Vientiane. The opening of the representative office of the Ministry of Defense of the Russian Federation is also timed to this date. In addition, a detachment of the International Mine Action Center of the Armed Forces of the Russian Federation is currently working in Laos.

Recall that the previous contract was signed during the HeliRussia exhibition at the end of May 2016: the holding company “Helicopters of Russia” and the Ministry of Defense of Laos agreed on the repair of military products. According to the contract, the holding’s specialists had to repair four helicopters during the year, among them two Mi-17-1Bs and two Mi-17s.

In the town of Lak Sao, the latest Russian demining means handed over to engineering specialists of the People’s Army of Laos

the Laotian side accepted

the Laotian side accepted a new batch of Russian-made military hardware, namely, T-72B1 tanks and BRDM-2M armored vehicles, and the Thong Hai Hin airfield in the province of Xiangkhouang, which had been upgraded by Russian specialists," the press office said.

On 20 January 2019, the first batch of T-72B1s and BRDM-2Ms had already taken part in a parade on the occasion of the 70th anniversary of the Lao People’s Armed Forces

Russia handed over another batch of armored vehicles to Laos 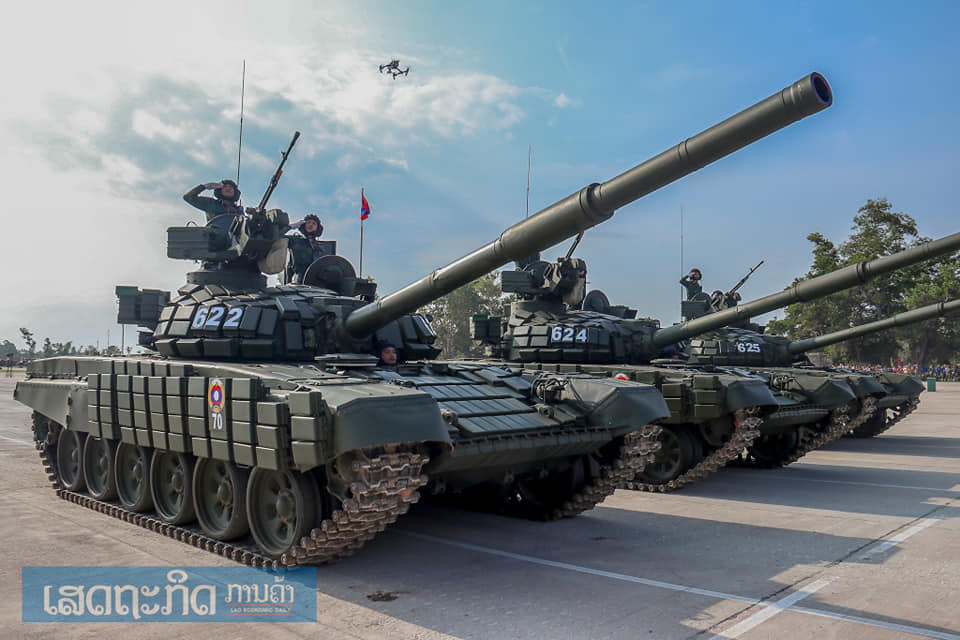 On January 20, 2020, on the sidelines of the celebrations marking the 71st anniversary of the founding of the Lao People’s Lao People’s Army as part of military-technical assistance, the Lao side was handed over the next batch of Russian military equipment - T-72 tanks and BRDM-2M armored vehicles, as well as the modernized Russian experts of the airport Thonghaihin located in the province of Xiang Khuang. 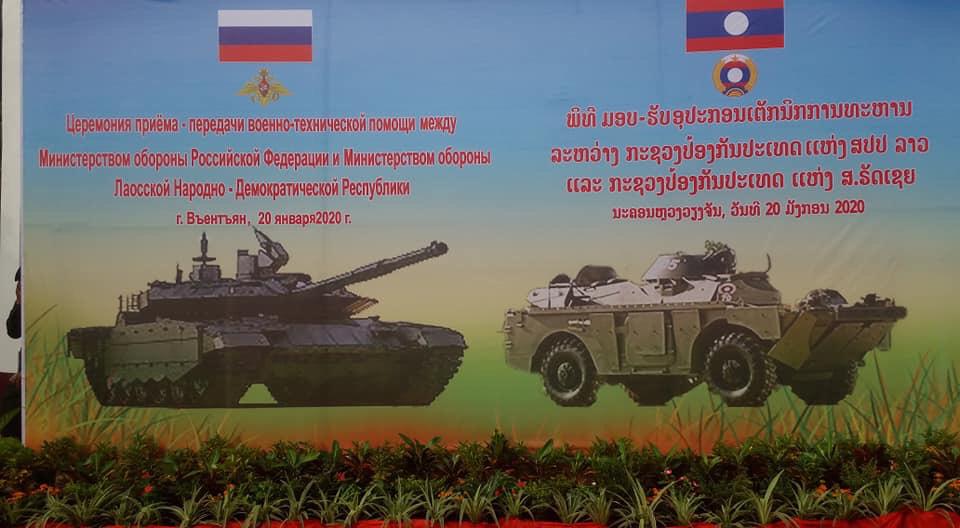 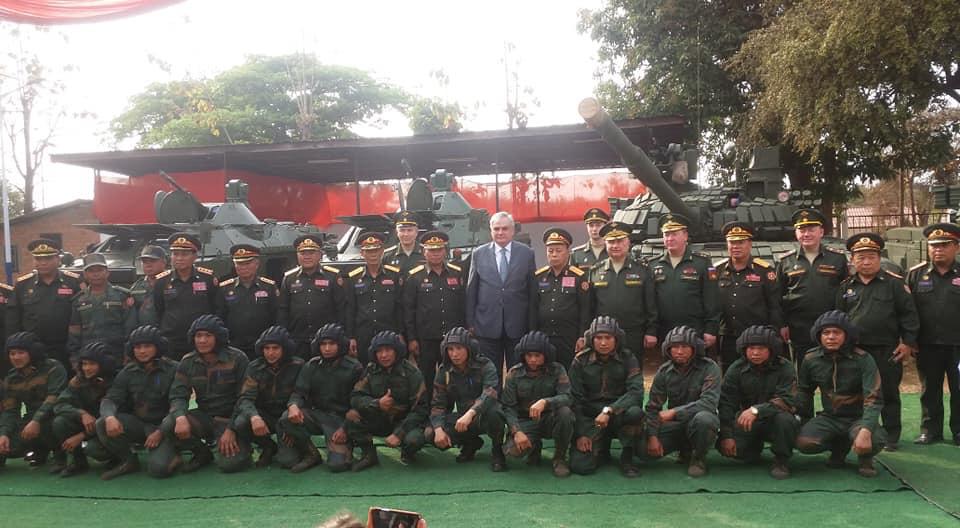 According to the Lao mass media, on January 28, 2021, as part of the provision of military-technical assistance, another batch of Russian equipment was handed over to the Lao side - TMK trench machines, KS-3574M3 cranes on the Ural-4320-1058-31 chassis, as well as technological means of group storage of military technology. 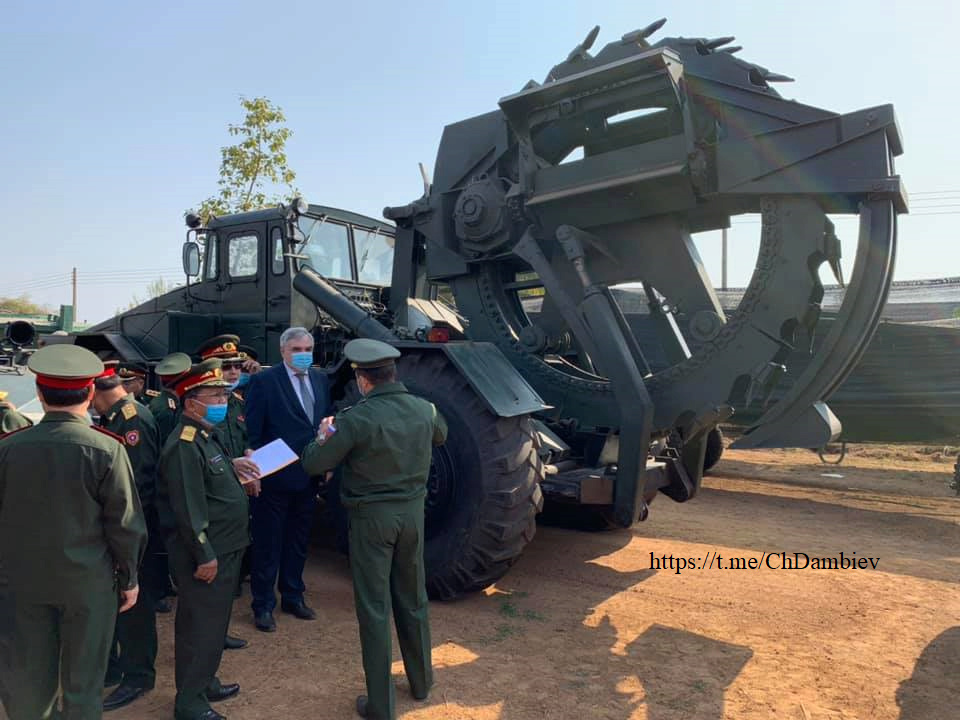 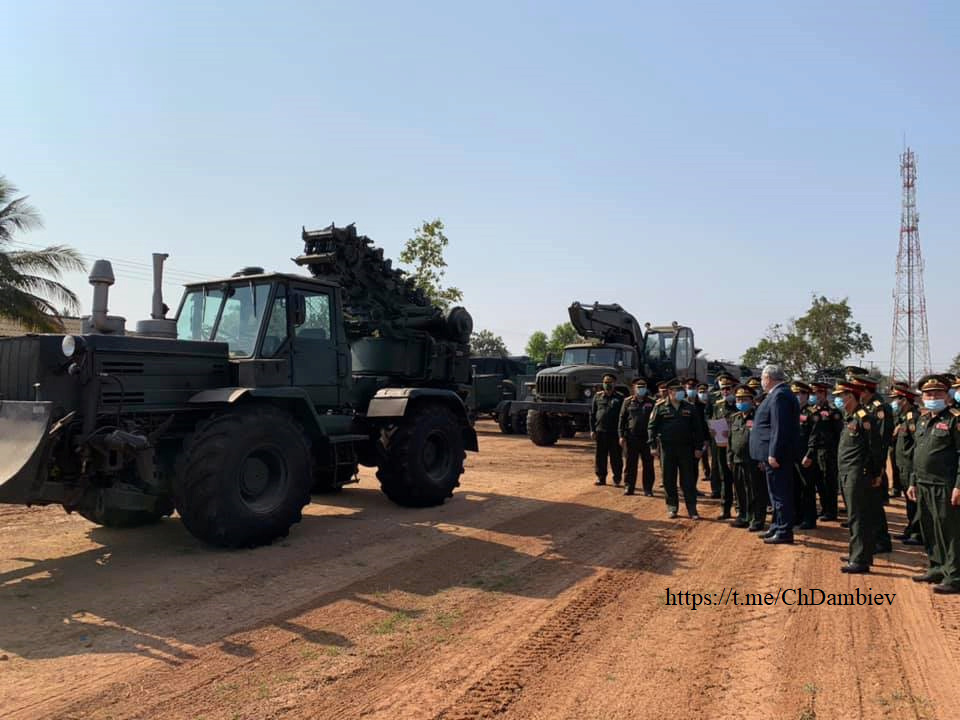 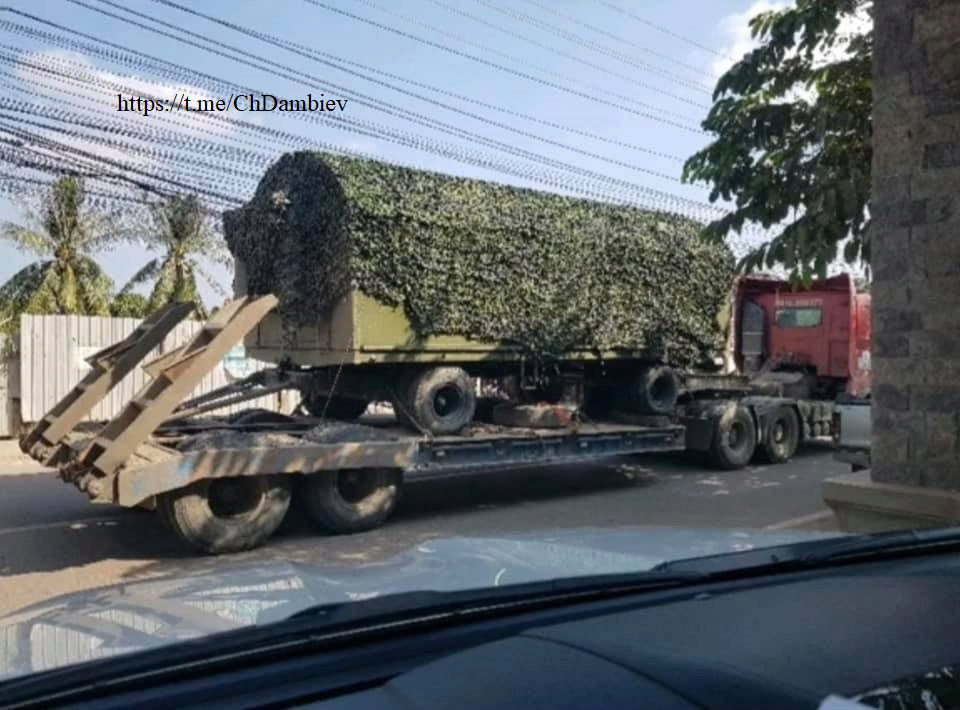 Russia handed over An-26 military transport aircraft to Laos 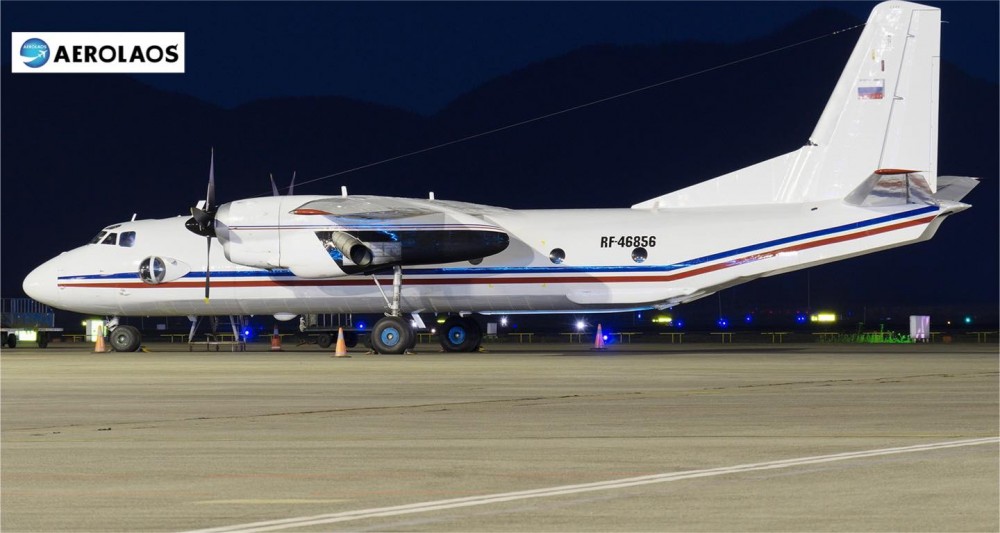