I doubt there will be any major issues with the turbines. These things are bench tested for a long time before being put into serial production. What is way more likely is mistakes being made with the reduction gear or something like that.
Podlodka77

And the "izdeliye-30" engines for the Su-57 are bench tested, so they are not yet serially produced, right ?
One is bench testing and the other is in real conditions.
In any case, I did not criticize the 22350 project and the "Golovko" frigate, because I believe that the fact that "Golovko" is in seaworthy condition is more than a good indicator - the project is finally moving in a positive direction.
The most difficult period for frigates 22350 has passed because "Golovko" has sailed.
I do not consider it tragic if the testing of the turbines lasts 2 to 3 years, because something like that happens quite often when it comes to new systems.
The moment the turbines prove their reliability, then we can expect a drastic acceleration of the construction of the 22350 project.
Electronic equipment and all weapon systems were PROVEN on the frigates of that project, so the reliability of the gas turbines remained to be proven.

"We defended the initiative work, a technical project to create amphibious hovercraft of the Moray Eel type. This is an absolutely unique project for our plant, no one has ever built it before, now it is being upgraded, and we expect to sign a contract this year. <...> We hope that this year we will start building, " said Korolev.
From 1985 to 1992, 8 "Moray Eels" were built at the KHSZ, which were transferred to the border service. In 2005, seven of them were decommissioned and disposed of, and the last of the eight amphibious hovercraft D-143 (PSKR-143, serial number 317) built for the Soviet Navy is being preserved in the KHSZ workshop.
Also, from 2002 to 2006, three boats were built under the export project "Murena-E" for the South Korean Navy. In September 2018, plans were announced for the construction of eight boats from 2019 to 2027.

Amphibious hovercraft project 12061 "Murena" - a series of Soviet and Russian high-speed amphibious boats designed for landing amphibious troops on an unequipped coast. They belong to ships of the 4th rank. The boats are capable of providing fire support for landings, or setting up minefields, and transport self-propelled, towed, and non-self-propelled vehicles.
The Moray Eel is capable of reaching speeds of 55 knots (102 kilometers per hour) and carrying one tank, two infantry fighting vehicles or 130 amphibious personnel. The ship is armed with two AK-306 30-millimeter automatic artillery systems, two AGS-17 "Flame" grenade launchers.
In 2014, at the Euronaval-2014 exhibition in France, a mock-up of the Murena-M boat was presented, designed specifically to work as part of the Mistral-type universal amphibious assault ships ordered in France and not received by Russia due to Western sanctions.
After Paris refused to supply Mistrals to Moscow, in 2020 the first two universal amphibious assault ships "Ivan Rogov" and "Mitrofan Moskalenko" of the Russian project 23900 were laid down at the Kerch shipyard "Zaliv". Like the Mistrals, the UDC Project 23900 has an aft dock chamber for landing craft.

The light weight of the 30mm grenade launchers is not really relevant to vehicle mounted setups and I think the 57mm projectile would be rather more powerful and effective.

Regarding the delays and issues with producing ships, what other ship maker does not have delays and problems getting brand new designs working properly... and what other shipmakers have to deal with sanctions and the hostile actions of the entire western block?

I would say if they were not having delays and issues then they are not raising the bar high enough... Russia is looking at a new MiG light fighter design, a new promising Sukhoi light fighter design and a very successful medium/heavy 5th gen fighter design, while the US, its main competitor with the blind support of the entire western world and the ability to print money and take taxpayers hard earn money and spend it as they please, is putting F-15s back into production because their F-22s and F-35s suck.

Russia has MiG-35s in low rate production and Su-35s in production too along with its stablemates Su-30 and Su-34, while the mighty US has put F-15s back into production and is considering reviving the F-16 too...

Their situation with ships is not any better, LCS a total write off despite building 17 of them... one is already scrapped, 3 expensive Zumwalt destroyers that are also useless and they finally got the Ford class ship to be more than a helicopter barge... not really plain sailing there either...

Regarding the new class of nuclear service vessels:


According to Decree No. 4321-r , it is prescribed to carry out in 2023 - 2029 budgetary investments at the expense of budgetary appropriations of the federal budget in the construction of the lead multifunctional nuclear technology service vessel with a commissioning date of the vessel in 2029 (capacity to be commissioned - 9 .28 megawatts). The total cost of the vessel was determined at 24.798475 billion rubles, and the volume of budget investments in its construction in the specified period - at 12.3992375 billion rubles.

This refers to the construction of a multifunctional nuclear-technological service vessel (MSATO) of project 22770 , which is intended to replace the currently operated nuclear-technological service vessel "Imandra" of project 1948 (in service since 1980). The development of technical project 22770 was completed by Iceberg Central Design Bureau JSC in 2018 under a state contract concluded with the Ministry of Industry and Trade of Russia worth 489.5 million rubles. In October 2022, FSUE Atomflot issued an additional contract to the Iceberg Central Design Bureau in the amount of RUB 249.998 million to carry out adjustments to technical project 22770 by May 31, 2023 in order to "exclude foreign-made equipment from the MSATO, the supply of which is currently in the Russian Federation terminated".

MSATO project 22770 is designed to carry out the following main technological operations:

- unloading of spent nuclear fuel from the reactor units of serviced ships;
- loading of fresh nuclear fuel into the reactor units of the vessels being serviced;
- reception, storage and distribution of liquid radioactive waste generated during the operation of ship reactor installations, as well as in the process of refueling of nuclear fuel;
- exposure of spent fuel assemblies in order to reduce residual heat releases;
- loading of aged spent fuel assemblies into transport containers for transfer for processing;
- decontamination of removable equipment of ship reactor plants and refueling equipment. 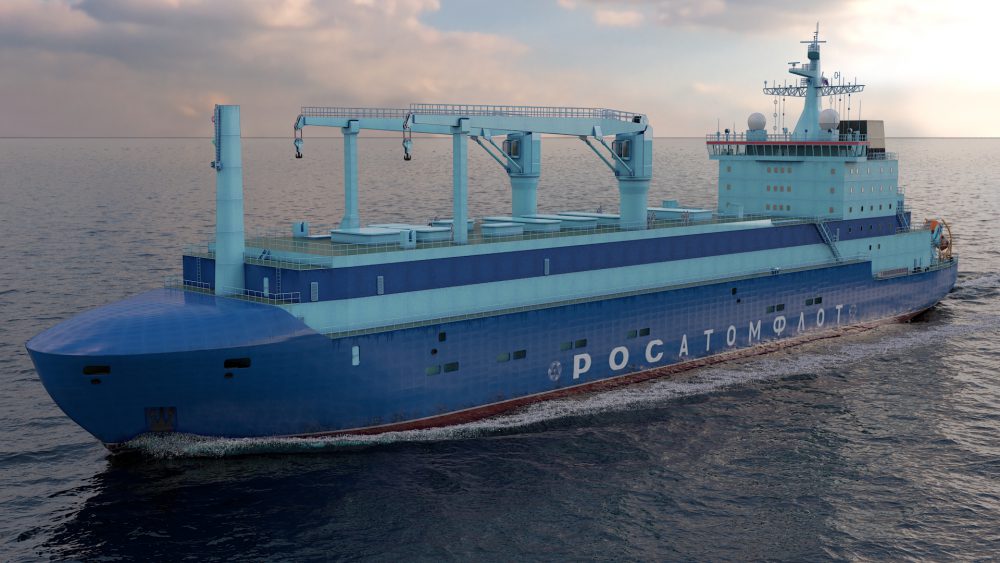 
In turn, according to Decree No. 4322-r , it is planned to carry out in 2023 - 2030 budget investments at the expense of federal budget allocations in the construction of the fifth and sixth serial (that is, the sixth and seventh in general) universal nuclear icebreakers of project 22220 (LK-60Ya) with a capacity of 60 megawatts each, with commissioning in 2028 and 2030.

The Crimean shipyard "More" is being modernized for the production of ships and vessels from steel
January 20, 2023 at 8:54 Subject: Industry 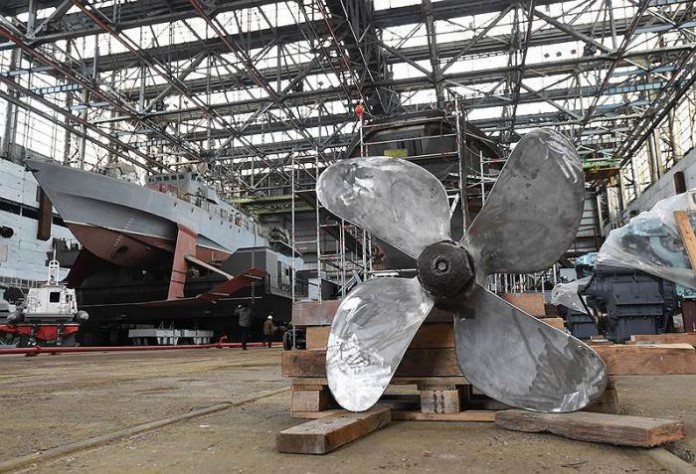 The Feodosia shipbuilding plant "More" plans to modernize ship-lifting capacities to enable launching ships and vessels over 80 meters in length and with a displacement of over 1,000 tons. It is reported by Korabel.ru with reference to the Acting Minister of Industrial Policy of the Republic of Crimea Elena Elekchan.

According to her, after the modernization, the enterprise will be able to start building fishing vessels and resume the assembly of high-speed passenger ships. As Elekchan noted, now the main funds are being invested in the development of a modernization plan.

Anton Korzun, Deputy General Director of the shipyard, said that an additional 45 specialists were hired in November for the current work on the implementation of existing orders.

"We plan to additionally attract both engineers and technologists who will participate in the design of various vessels and ships," Korzun added.

Now "More" produces ships for military and civil purposes from aluminum alloys and composite materials. The modernization will allow the production of steel products to begin. This will expand the list of orders and employ 600 people.

After the annexation of Crimea in 2014, the enterprise was nationalized by the authorities of the peninsula. Then, in 2015, they were transferred to the ownership of the Russian Federation, and 1 billion rubles were contributed from the federal budget to the capital. Since 2016, the shipyard's facilities have been transferred to the management of the Pella plant, which used them to fulfill an order for project 22800 Karakurt small rocket ships.

In 2018, Russian President Vladimir Putin signed a decree on the transfer of the shipyard to the state corporation Rostec, whose representatives then said that the plant was underloaded and needed serious modernization. In 2020, the Accounts Chamber noted that due to sanctions, the construction of a boat to clean up oil spills was never completed, since it was not possible to purchase engine parts.
At the same time, "More" declared its readiness to build pleasure high-speed motor ships Kometa and fishing trawlers for Cuba, and also concluded an agreement with the Black Sea Fishing Company for the construction of ten trawlers for fishing in the Azov-Black Sea basin.