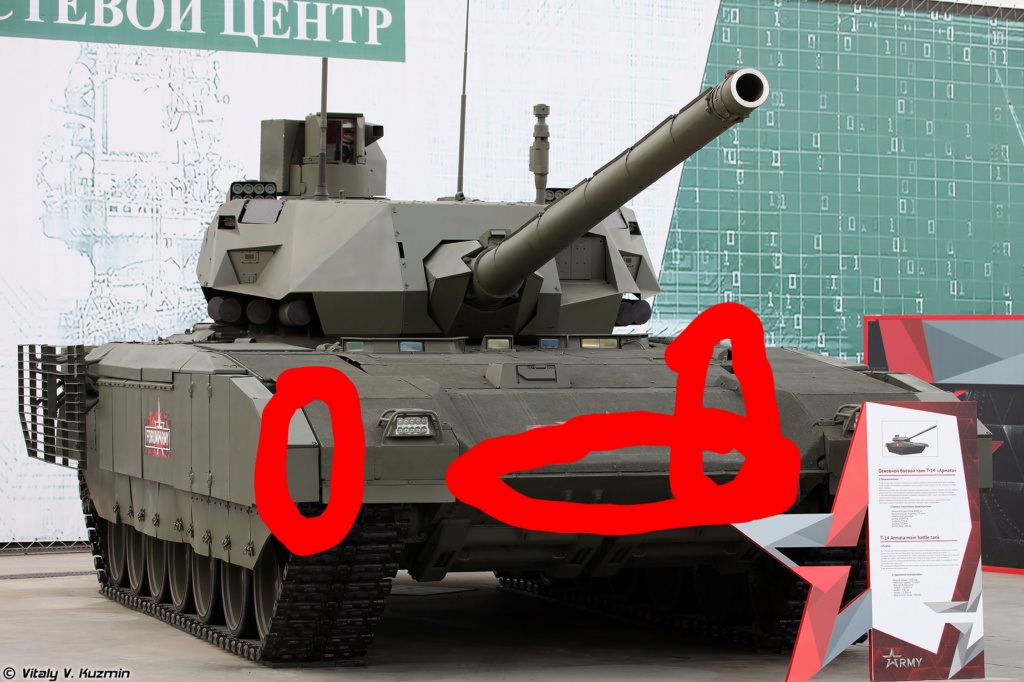 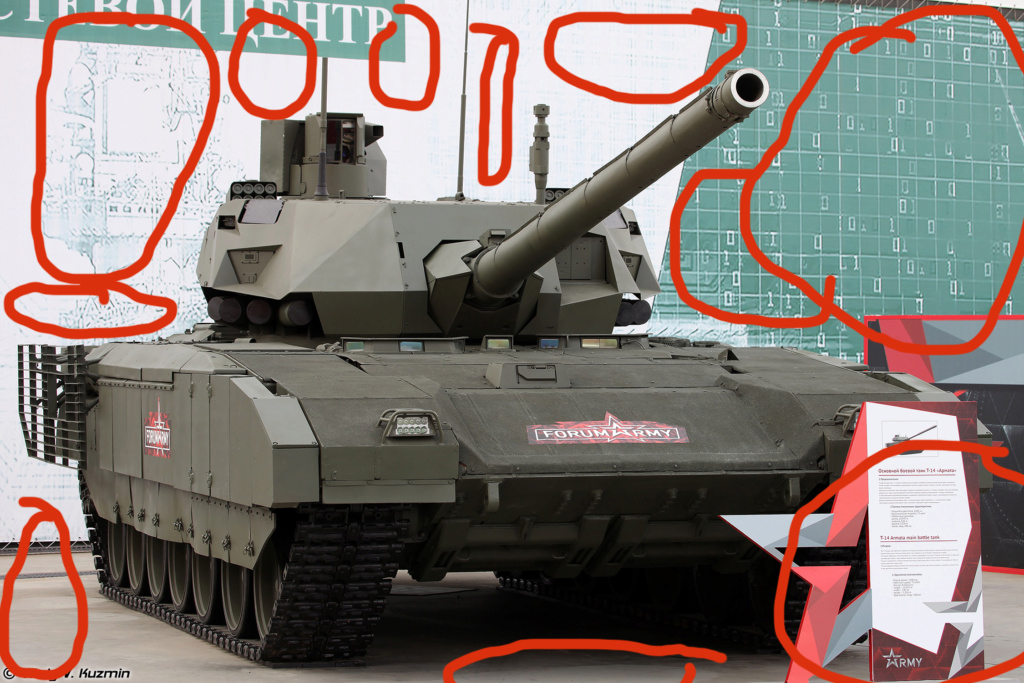 I saw this pic the other day and notices some differences in how the ERA merged with the body: 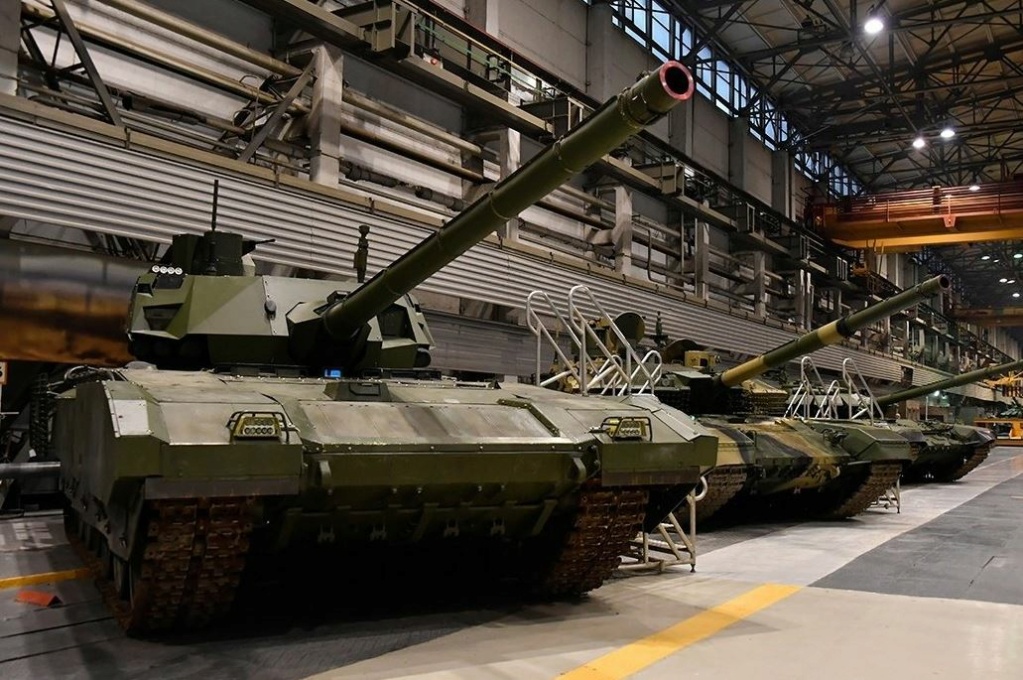 The frontal armour looks thicker and the side armour modules look bigger and better integrated into the main body armour... ie no gaps.
Hole

You´re not alone. Found this: 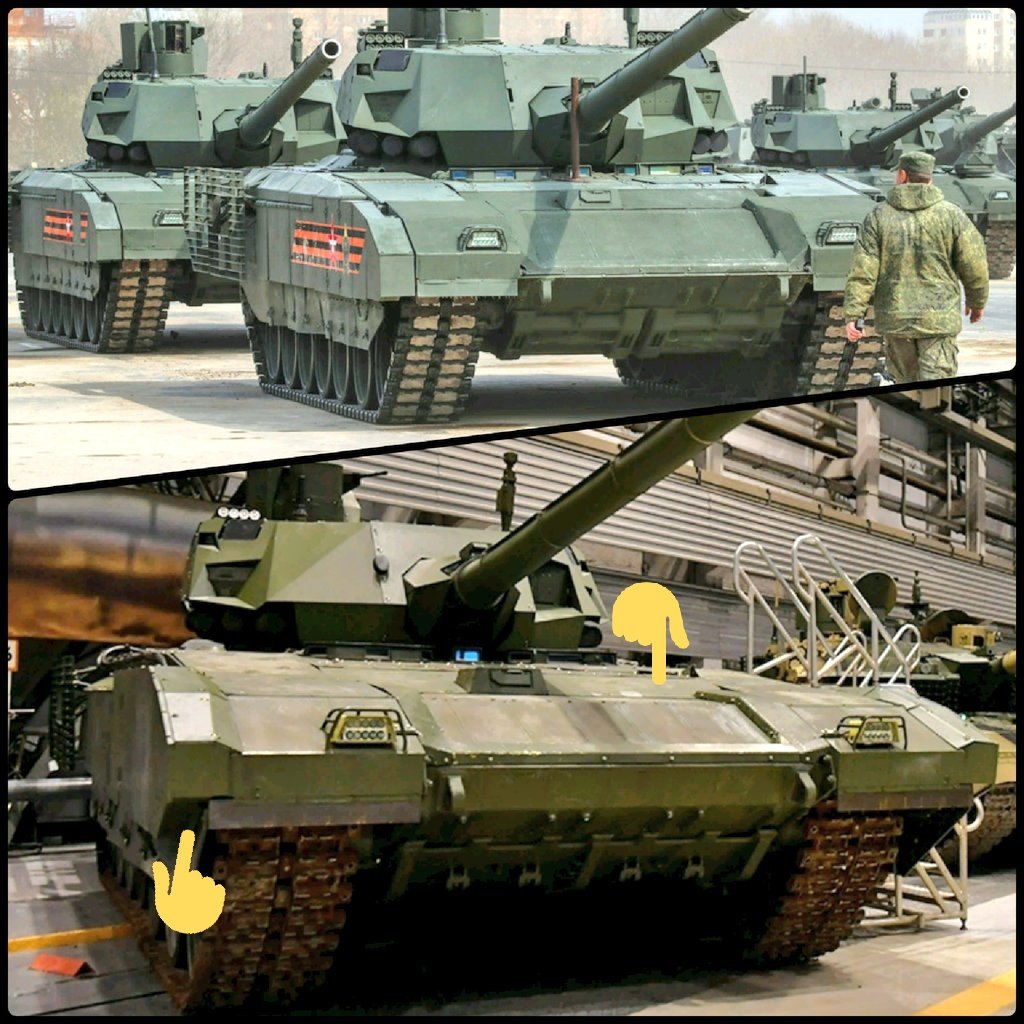 The hull finish looks better then that of the F-35. 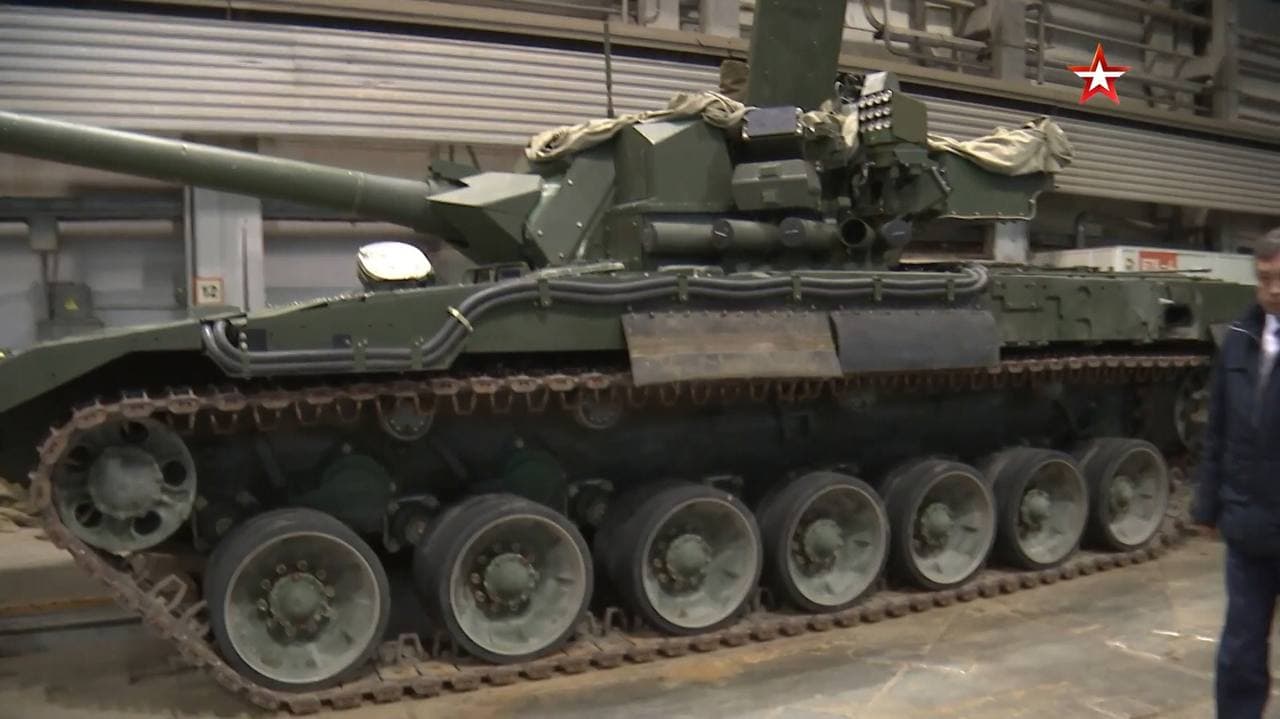 shoutout to the clowns who thought it was a good idea to "analyse" the armor of the T-14 using photographs and come up with all kinds of imaginary limitations only for it to end up looking way different from the prototypes. Look above: its the cassettes for the projectile and charges. Someone was even kind enough to position an old APFSDS projectile just to compare 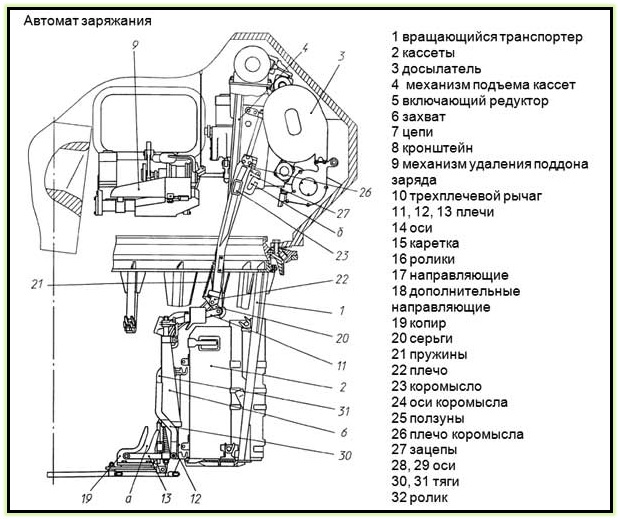 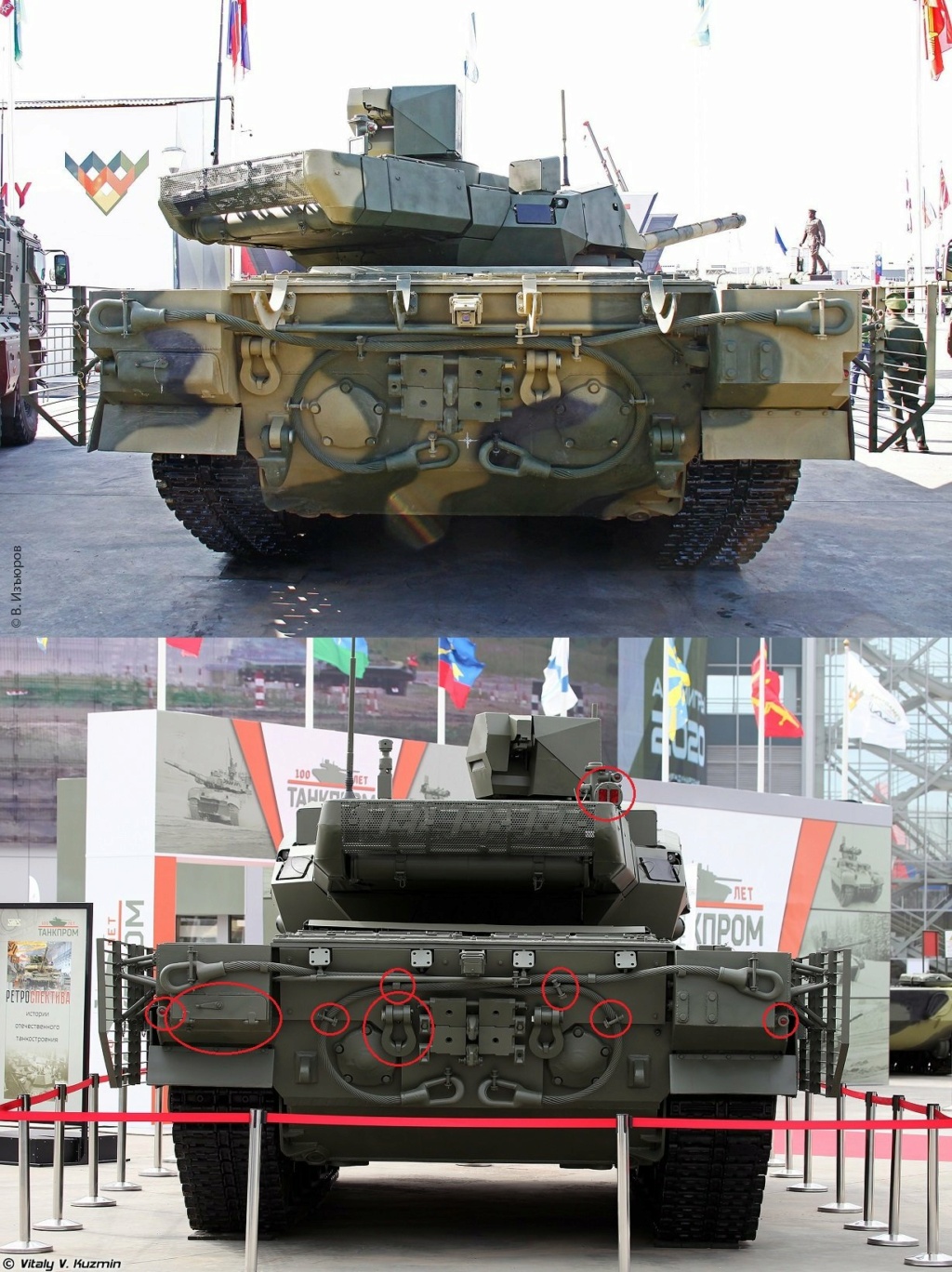 The normal metal cover is probably to reduce RCS as well as rain and weather protection and small arms protection for the items covered.
hoom

I know that.
Just aesthetically I find the cover looks wrong somehow, I don't know if its the shape or proportions or what

Moscow. December 9th. INTERFAX - The Armata tank has received new shells, state tests of the entire complex will be completed in 2022, First Deputy chairman of the Board of the Military-Industrial Commission (MIC) of Russia Andrey Yelchaninov said in an interview with Interfax.
"The tests are continuing. This year, the new ammunition for the tank also entered state tests. We expect them to be completed in full in 2022. More than 40 Armata tanks will be transferred to the troops after 2023," Yelchaninov said.
According to him, the T-14 is a step forward for decades, the re-equipment of troops for this machine will be phased and smooth as the service life of tanks of previous generations expires.
As Interfax reported, the Armata platform was developed by Uralvagonzavod Concern as a base for the T-14 main battle tank, the T-15 heavy infantry fighting vehicle and the T-16 armored repair and evacuation vehicle. Armored vehicles on the Armata platform are being tested.
The T-14 is considered the world's only tank of the third post-war generation. According to military experts, "Armata" is a new word in tank construction, has no analogues in the world. This is a fundamentally new and completely Russian development. The T-14 tower is uninhabited. For the first time, the crew is placed in an armored capsule separated from the ammunition.

They got or are getting 20 this year. The rest of the article was news to me also so am sharing. As with all news, will have to wait and see.

So, since the 2016 unveiling of Armata, Kurganetz, and Bumerang platforms - 5 .5 years later, we have: maybe 20 Armata tanks being delivered this year or maybe not. (After being told 100 were being produced 2 years ago). Zero Kurganetz and zero Bumerang in service. These cannot all be technical issues. Sounds to me like the bean counters would rather procure warmed over 1970s tech retreads than pay the rubles for modern and survivable armor technology.

Or, they have decided that in the era of suicide drones and advanced fire and forget anti-armor weapons the survivability difference isn't worth the money.

calripson wrote:So, since the 2016 unveiling of Armata, Kurganetz, and Bumerang platforms - 5 .5 years later, we have: maybe 20 Armata tanks being delivered this year or maybe not. (After being told 100 were being produced 2 years ago). Zero Kurganetz and zero Bumerang in service. These cannot all be technical issues. Sounds to me like the bean counters would rather procure warmed over 1970s tech retreads than pay the rubles for modern and survivable armor technology.

Or, they have decided that in the era of suicide drones and advanced fire and forget anti-armor weapons the survivability difference isn't worth the money.

It was never an issue with equipment. It was always about cost vs benefit.

Testing new shells and how it works as a vehicle will be completed by 2022, which suggests giving them 100 this year or next would be a bit premature... especially if they need to change a few things.


It was never an issue with equipment. It was always about cost vs benefit.

And also a matter of perfecting the designs to the point where they are ready to put into units and see how they go.

It is already pretty clear the frontal armour has been improved and the side mounted armour modules are now better integrated too... I suspect all part of the process of converting one off or short production prototypes into serial production capable models that will go for in unit testing before final kinks are fixed and production starts.

My understanding was that the engine was to be 1,800hp to start with but with a growth potential built in with upgrades and improvements in materials to eventually be rated at 2,400hp.

In other words if you allow for a shorter parts life and engine life it could probably be run at 2,000hp at the moment but 1,800hp is considered enough for now for a tank only a few tons heavier than a T-90 with a 1,000hp engine.

I see nothing new or worring in such article.

Let's follow me: this year the Ground forces receive 20 Armata i.e. enough to equip two tank company in order to test operational doctrine at such level.
When such test would take place? Next year.
In the very same year we already know that they would receive other 40 tanks. Those added to the previous 20 would be enough to equip two battaillons of tanks, in order to test O.D. at battaillon level.
When this will happen? In year 2023, obviously.
Only once they will be completed full scale production will begin.

Now, it can also be that such tests would take only some months so that full production would begin in the very  same 2023 but also in such a best case scenario the stated yearly full scale production level i.e. 100 tanks could anyway be reached only in 2024...

In the end the Russian Army wants a functioning weapon system and not an F-35 on tracks.

Nuclear submarines are a higher defense priority for Russia than these tanks. The do most of the deterrence. Even 2,000 T-14 tanks
are not going to stop NATzO and its dreams of conventional war on Russia. Nukes have been keeping the peace for 70+ years.

As noted above, sampling this new tank for testing in daily use is more than good enough. Cranking production for no strategic
benefit does not make any sense.

The neocon wet dream scenario is Ukraine destroying large numbers of separatists' tanks or Russian tanks sent into Donbass via the 400 Javelin missiles they have provided or the Turkish suicide drones. Replicating the Israeli experience in Lebanon or the Armenian experience in Nagorno Karabakh. No one ever said they were original. If the Russian military has not thought through this scenario and developed countermeasures for it; they are criminally incompetent.

Also, T-90 still get's the job done just fine, it's not like they are in a hurry