The count will be very difficult... I just watched the most recent Die Hard movie and it seems those sneaky Ruskies have developed a super helicopter that looks like a Hind in a city with the fixed twin 30mm cannon though it seems to fire 50 cal rounds based on their performance against a building... and their muzzle flash.

But when you fly to the Ukraine and Chernobyl it turns into an Mi-26 heavy lift helo... but can still fire that twin barrel 30mm gun that fires 50 cal ammo...
magnumcromagnon

GarryB wrote:The count will be very difficult... I just watched the most recent Die Hard movie and it seems those sneaky Ruskies have developed a super helicopter that looks like a Hind in a city with the fixed twin 30mm cannon though it seems to fire 50 cal rounds based on their performance against a building... and their muzzle flash.

But when you fly to the Ukraine and Chernobyl it turns into an Mi-26 heavy lift helo... but can still fire that twin barrel 30mm gun that fires 50 cal ammo...

It could be worse, you could be watching Rambo 3 where at the end of the movie there's a message personally thanking the Afghan Mujahadeen. Leave it to Hollyweird to pump out horrendously inaccurate movies after another, on top of being stupefying mind numbing garbage.
medo

mack8 wrote:Gents, any idea what 3 Su-35S and 5 Su-30SM are doing in Yelizovo, Kamchatka? I saw pictures of the Su-35Ss there before, but i thought they were just passing. 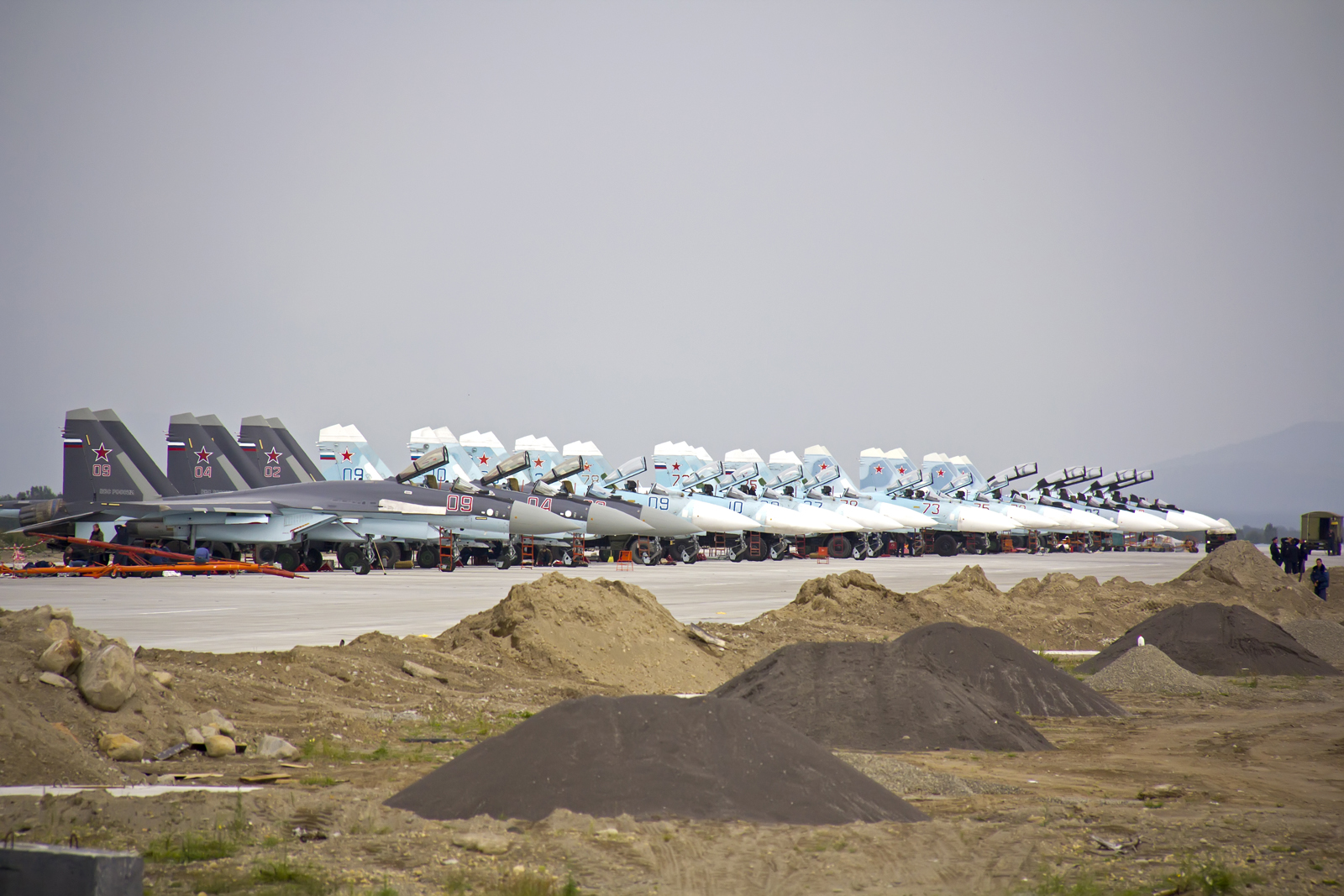 Most probably part of exercise, which is now in Far East.
Mike E

GarryB wrote:The count will be very difficult... I just watched the most recent Die Hard movie and it seems those sneaky Ruskies have developed a super helicopter that looks like a Hind in a city with the fixed twin 30mm cannon though it seems to fire 50 cal rounds based on their performance against a building... and their muzzle flash.

But when you fly to the Ukraine and Chernobyl it turns into an Mi-26 heavy lift helo... but can still fire that twin barrel 30mm gun that fires 50 cal ammo...

Excellent. Domestic machines and tools are very important, specially for case of sanctions, because there is no problem with spare parts and new tools.
Viktor


"Just before the 2020 troops will be erected more than 8.5 thousand TMY. Their construction allocated 12 billion rubles,"


"Just before the 2020 troops will be erected more than 8.5 thousand TMY. Their construction allocated 12 billion rubles,"

Good news. For air bases and air fields, they should build fixed hard shelters, those tent shelters should be used for operations outside their air bases, when they operate from roads and helicopters from any fields. Of course, those tent shelters will not be used only in RuAF, but also in army for their AD complexes and other expensive equipment, when they will operate outside from their bases.
zg18 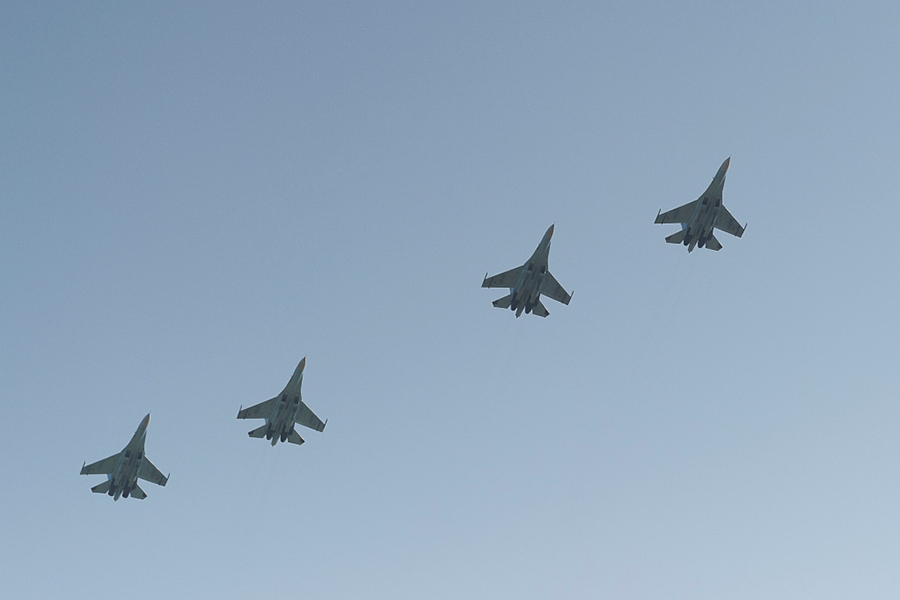 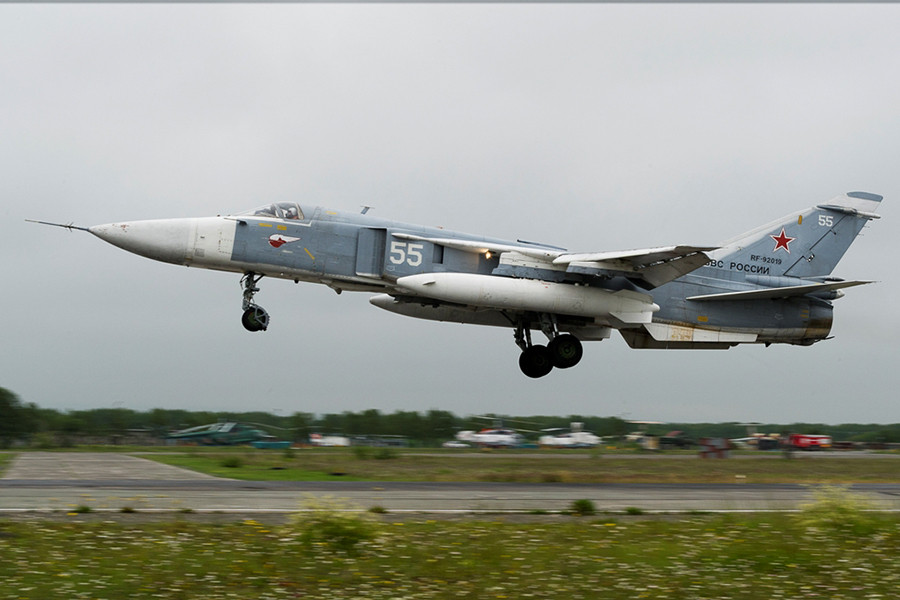 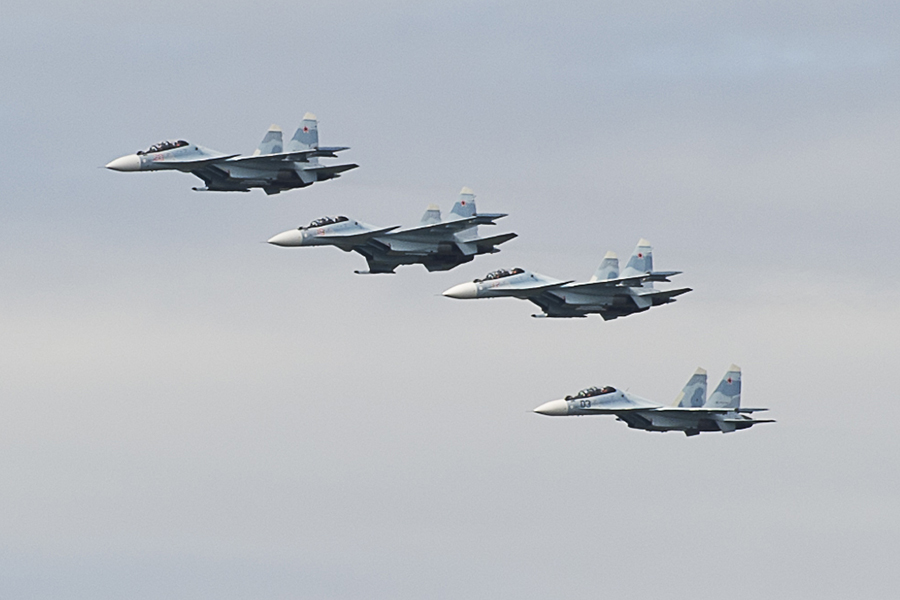 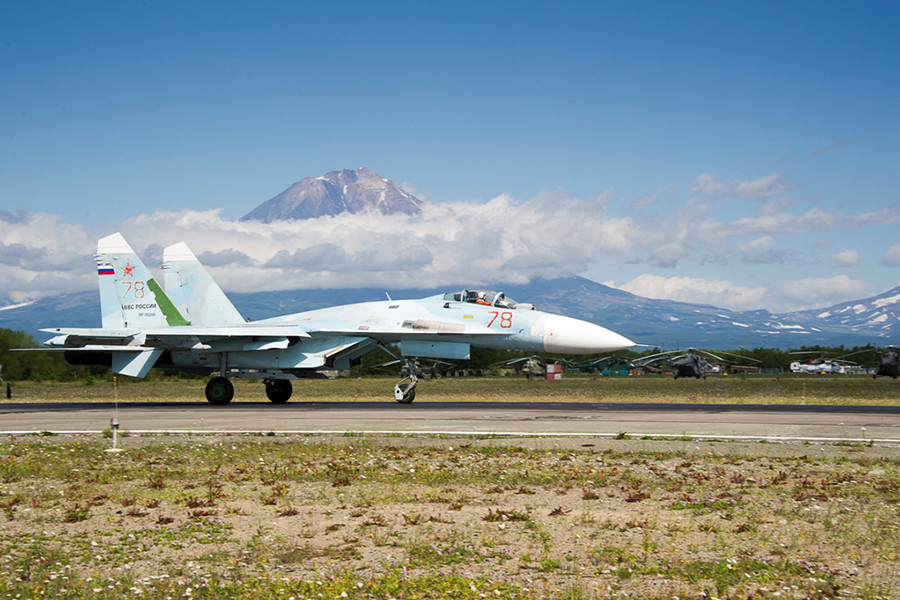 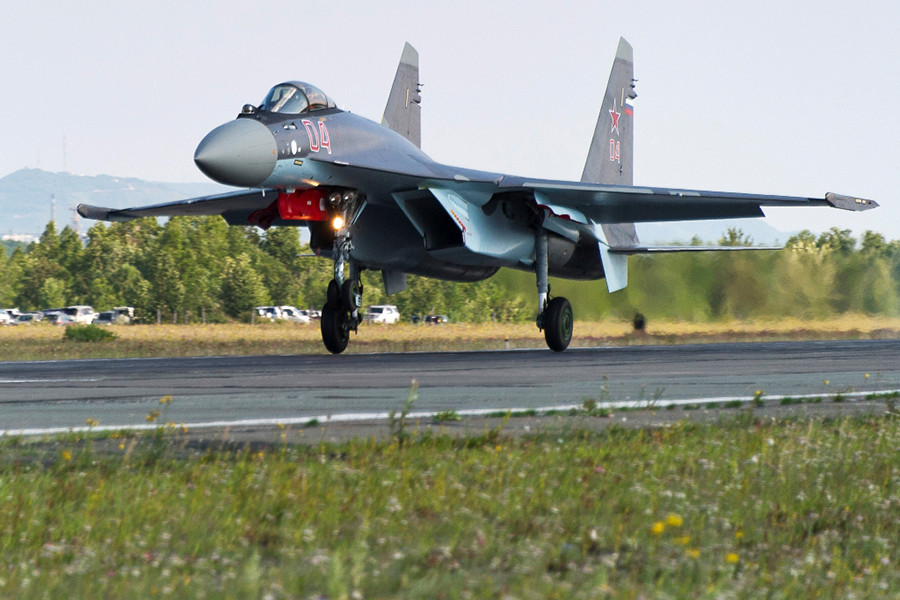 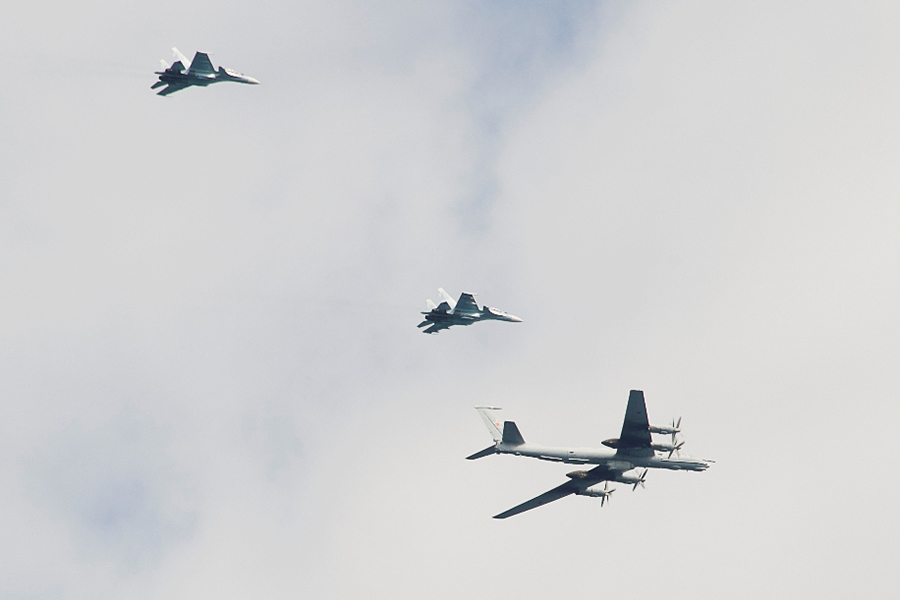 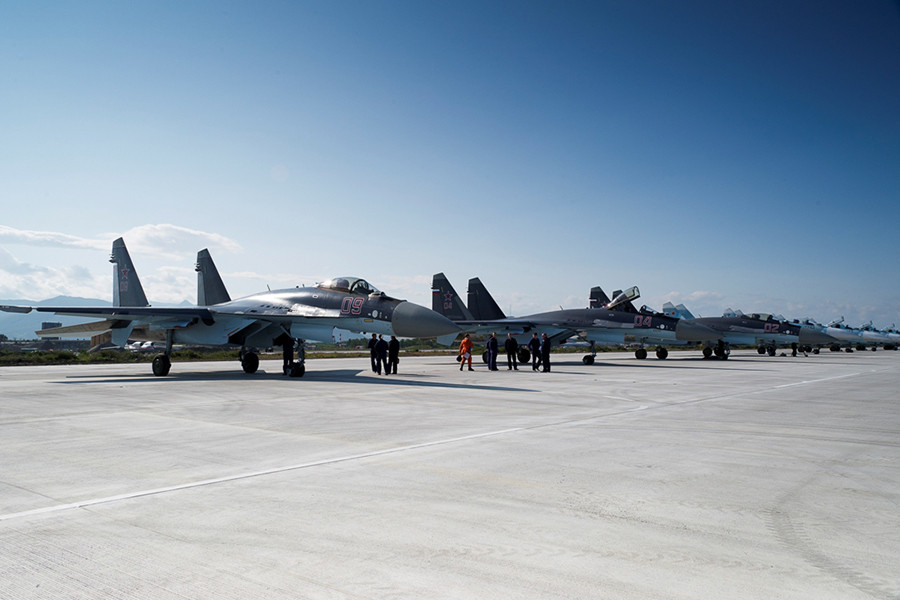 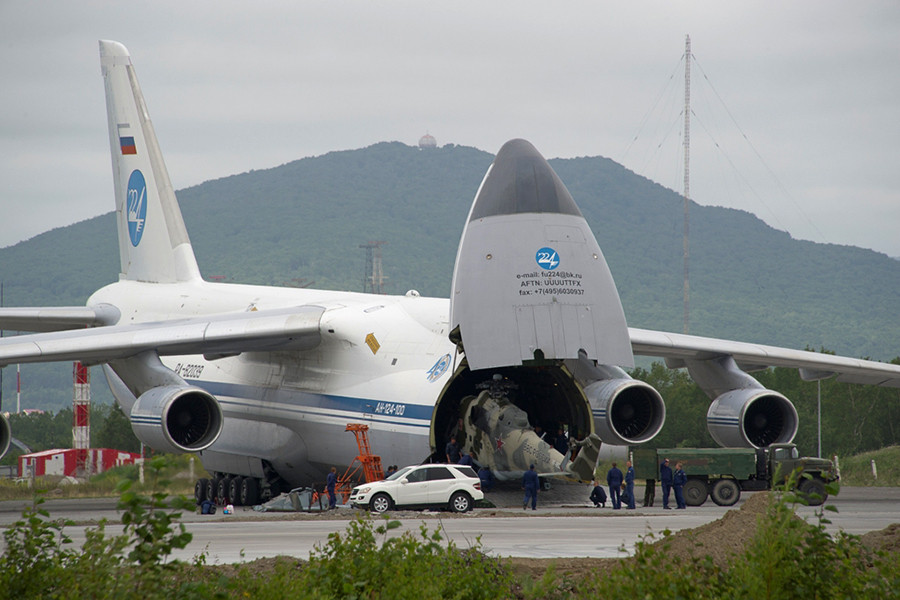 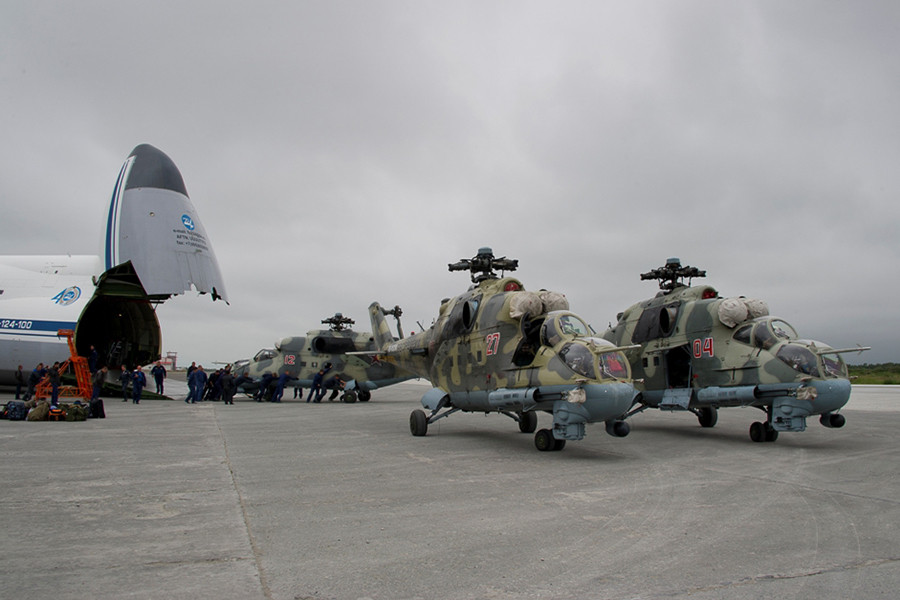 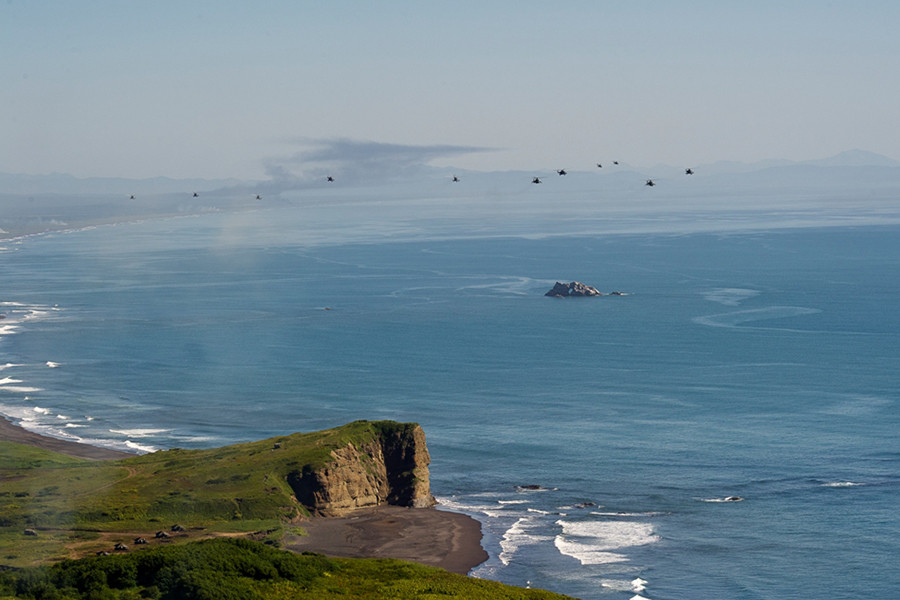 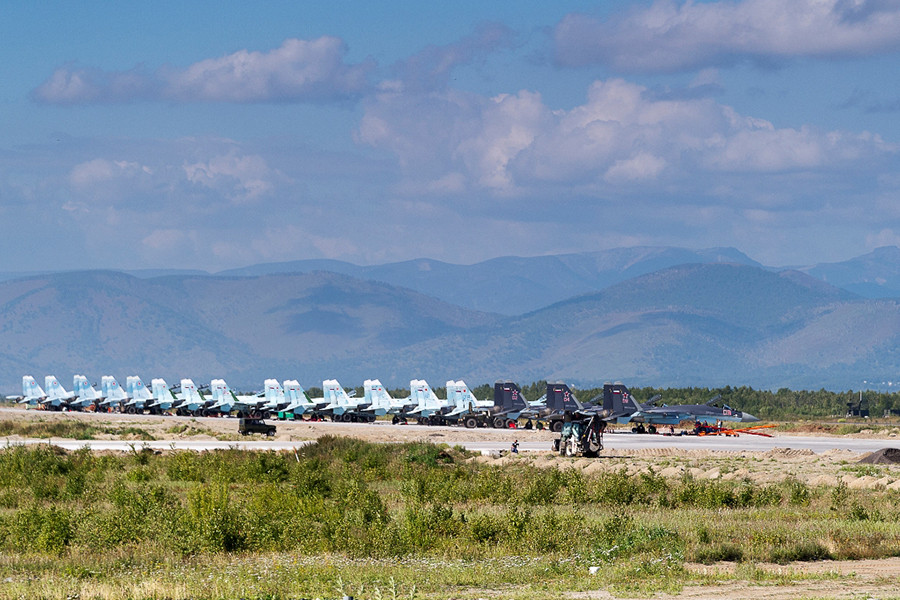 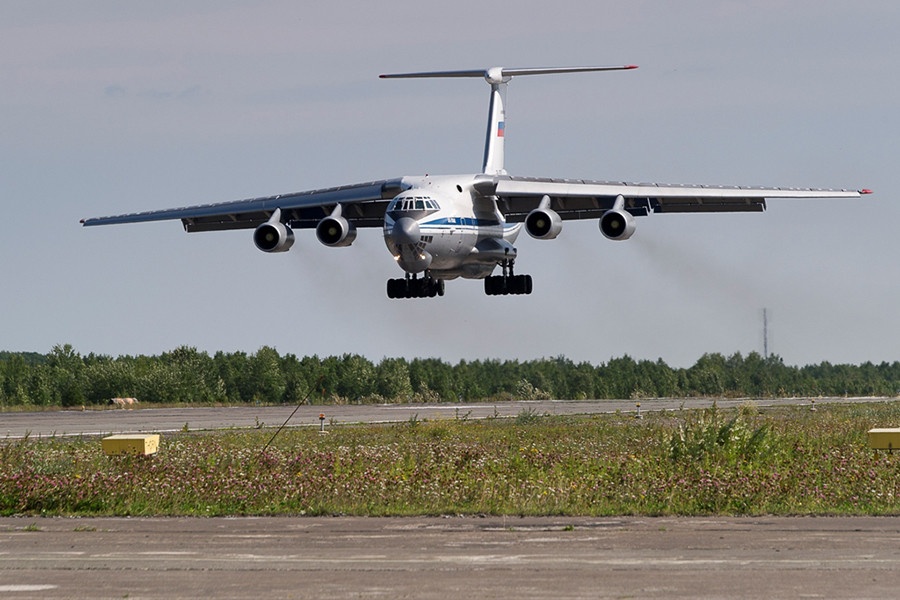 Some great pics there...

What's the status of the development of the Kamov Ka-92 and it's VK-3000 engines?
George1

Six Russian fighter jets were intercepted by American and Canadian planes off the coast of Alaska on Wednesday, US defence officials have confirmed.

They entered what is known as the Air Defence Identification Zone (ADIZ), but did not enter US air space.

The planes, two of which were MiG 31 jets, left the area without incident.

Officials said this type of incident was not uncommon, and happens up to 10 times a year.

The ADIZ is a zone of airspace which extends out approximately 200 miles from the coastline and is mainly within international airspace.

The ministry called it a "serious violation".

Sweden has said it has summoned the Russian ambassador over the incident.
Mike E

VLADIVOSTOK, September 22. /ITAR-TASS/. In a large-scale military exercise conde-named Vostok 2014 (East 2014), Russian MiG-31 fighter-interceptor aircraft air covered on Monday a Pacific Fleet’s naval group, Defense Ministry sources told ITAR-TASS.
Crews of four Mig-31 aircraft took off from Yelizovo airfield in Kamchatka’s regional centre of Petropavlovsk-Kamchatsky, heading for the Pacific to air cover warships in an imaginary evasive action.
Despite difficult weather conditions, they successfully simulated air fights and also fired missiles at sea targets.
The planes covered more than 2,000 kilometers and spent about three hours in flight.
A strategic command and staff exercise code-named Vostok 2014 (East 2014) with about 100,000 troops participating began in the Eastern Military District on September 19.
The manouevres involve units that participated in a snap combat readiness check in the Eastern Military District on September 11-18 when the troops were put on full combat alert, airlifted, and redeployed by rail and sea. Tactical and cruise land-, sea-and air-launched missiles will be fired during the manoeuvres taking place at more than 20 training ranges from Anadyr in the north to Vladivostok in the south.
The troops practice skills to defend the coast and islands in Sakhalin, Kamchatka, Chukotka, and the southern part of the Primorsky Territory.
The exercises will end on September 25. They are the final stage of a series of command and staff, and special exercises, drills, and surprise inspections in 2014.
Viktor

Mikhail Pogosyan: in a few years' Aviastar-SP "to be released on the production of 15-18 Il-76MD-90A in the year
GarryB

As this is a photo thread... here it is: 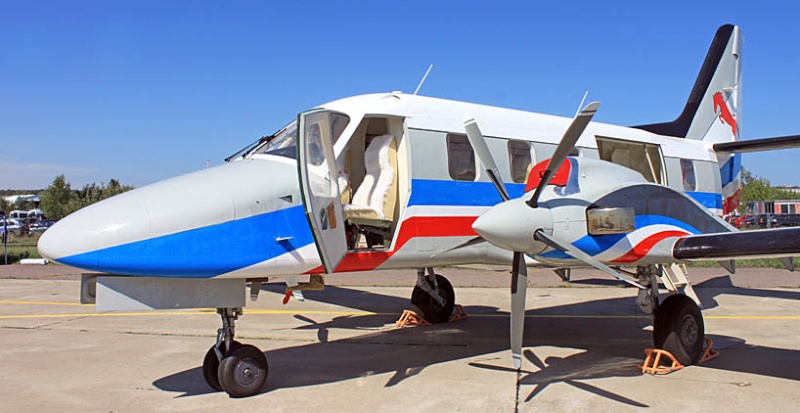 Has been billed as a replacement for the An-2.... big shoes to fill.
Austin

Ilya Kramnik has write up on Defence Cuts

As far as Russia could cut military spending in the next 10-15 years?

Russia and China have reached an agreement in principle on a joint project to create a heavy transport helicopter, said Deputy Prime Minister Dmitry Rogozin.

"For heavy helicopters moving normally. Treaty to the helicopter on 38 tons," - said to "Interfax-AVN" Rogozin.

According to him, it was decided that "Russia's contribution to the project will be material, our technical capabilities."

Previously CEO of the holding company "Helicopters of Russia" Alexander Mikheyev said "Interfax-AVN" that technical configuration of the Russian-Chinese heavy helicopter will be determined before the end of the year.

"Hopefully, this year we define the technical configuration of the helicopter and the status of the project," - said A.Miheev.

According to him, the Russian-Chinese heavy helicopter is planned to create on the basis of the technological platform of the heaviest in the world of the Mi-26, produced by "Rostvertol" (part of the holding company "Helicopters of Russia").

He noted that the new car will not be analogue or further development of Russian heavy Mi-26 helicopter. "This helicopter will be developed specifically for the Chinese market, to perform the missions that are formulated by various ministries and agencies in China. Primarily the Ministry of Emergency Situations," - said A.Miheev.

"IL" will create an alternative to "Ruslan" and "Antaeus"
GarryB

Please remember this is a photo thread people...
George1

The testing of fifth-generation fighter is in progress in Russia; the deliveries of these vehicles to armed forces will be started in 2016. PAK FA (or T-50) is the Russian fifth-generation fighter fitted with brand new avionics suite and state-of-the-art radar with phased antenna array. The main contractor of the project is Sukhoi Holding Company (part of United Aircraft Corporation). Compared to fighters already operated by the air forces, T-50 has a number of unique features combining the functions of attack aircraft and fighter.

"Our goal is to create a technological advance for development of the sixth-generation fighter. Such projects are being considered. First of all, the projects are related to materials and engines. There is an interesting joint project with Design Bureau named after A.M. Lyulka for development of engines with a unique performance; it is being considered at the moment", — Grigoriev told the journalists.

Moreover, the foundation is considering projects for development of composites for the advanced fighter and may choose one project in the near-term. "First of all this refers to monitoring the condition of the material. This is a key factor for the composites", — he added.

Experts told RIA Novosti earlier that the leading EU countries would not develop fifth-generation fighters; they will move straight to the sixth-generation UAVs.

The Advanced Research Foundation was established in 2012. Its main goal is to support the scientific research in order to strengthen the defense capabilities of our country.
George1

"In 2016 we are going to start the development of a family of heavy transport aircraft with a payload of 80 tons and more. These are wide-body aircraft. The next-generation transport aircraft was dubbed Ermak. It is planned to start the airliner’s mass production in 2024", - CEO of Ilyushin Company, Sergey Sergeev, said.
Follow us on: Follow ruaviation on Twitter

He noted that Ilyushin Company is facing a great challenge. The whole transport aircraft fleet must be replaced: light, medium, heavy and long-range heavy aircraft segments. "We hope to start the development of a military-transport aircraft with a payload of under 20 tons as soon as possible (the aircraft will replace An-12 vehicles) in the network of MTA project, which is being implemented by Russia and India", - S.Sergeev added.
Viktor

Defense Ministry: Russian aircraft will receive 120 helicopters before the end of the year
Viktor